Here are a couple of photos I took off velonews and bike rumor.  Looks like road disc brakes are happening faster than I thought.  These are a couple of pics of Formula's Di2 compatible disc brake setup that they are gonna use on Syn Nys's cross team this year.  They're way tighter than I ever imagined and apparently they already have them weighing less than Dura-Ace's caliper brake setup, not to mention better braking.  I thought the excess weight of disc-brakes would make for a real slow transition but that bubble has already popped.  I think this looks killer. 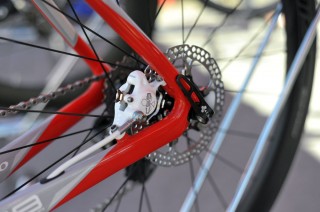 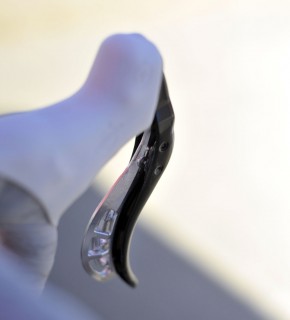 They were saying that these two little spots on the side of the lever were the Di2 buttons.  Good luck pushing those.  Maybe you have to install the buttons.  Maybe there is a summertime-button version and a winter-time button version, you know for gloved hands.  Maybe they'll add another button that will bring out a gadget-arm that reaches in your jersey pocket, opens up your Power-Gel, and squeezes it in your mouth so you never have to take your hand off the bars.  What could possibly go wrong with that?  GU all over your face.  When I was racing a few years back, about the time Power-Gel and GU became popular, I was getting ready for a time trial.  I put a vanilla Power-Gel just inside one leg of my shorts, which was a common place to carry them, to eat just before the start.  Anyway, I forgot all about it and was getting in line for the time trial and I noticed everyone sort of looking at me kinda funny.  So as soon as I rolled up to the start the girl doing the starting looks at me and says to her helper, "He must really like time-trialing." About that time I looked down and realized the gel packet had busted and white goo was running down my leg from the inside of my shorts.  Ahh, those great amateur racing days. 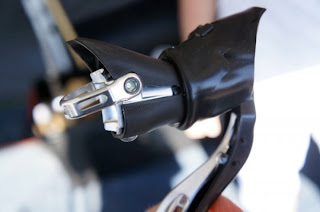 Apparently this is the brake cylinder.  Fitting things like this into a brake lever amazes me but I guess when you look at micro-chips and things as such its not that big a deal.  It looks pretty well protected from crashes.  Wonder how much these are gonna cost us.  I want some.  Some schweet new road disc-brakes would be really nice to replace the calipers that we've all been using the past however many years but most of my problems don't stem from trying to slow down but trying to go faster. I'll probably be running my calipers and cantis for a few more years. Yesterday I went and did the Tour de Hills race in Harrison, and while brakes were of a great importance what I really needed was a throttle.  These here brakes from Formula are super-schweeet and exceeded my disc-brake imagination by a long shot.  I like 'em alot.
Posted by MEECH at 5:30 AM