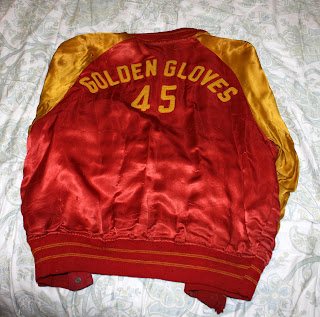 My mom is moving to Nashville here in a couple of weeks in order to be closer to her grandkids.  She's selling the house we grew up in and that means cleaning out 40 years worth of stuff.  Anyway my dad and his twin brother used to be prize fighters in their younger days and this is one of my dad's old trophies from his "dancing in the ring" days.  Its one of the coolest things I own and I love it.  My mom and dad are the greatest and I owe everything to them. 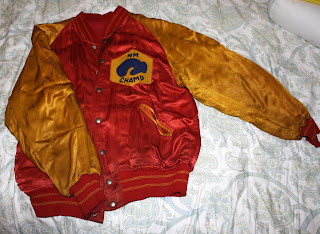 My dad went on to train fighters in the service and wherever he was living at the time and I have a killer scrapbook with some great photos to look back at from time to time.  When I was about 4-5 years old my dad bought a couple of pair of boxing gloves and decided he was gonna teach me how to fight.  So he tied a pair on me and then the other pair went on my older sister, who by the way was 5 years older and alot taller.  Anyway, she knocked me over the coffee table and that was my boxing career in a nutshell.  The damn gloves were so big and heavy I couldn't lift my hands to protect my face.  So my dad cut the gloves off and said, "Peewee, you better find another sport."  And I guess thats how I ended up on bicycles and motorcycles. You can't hit me if you can't catch me.  ;) 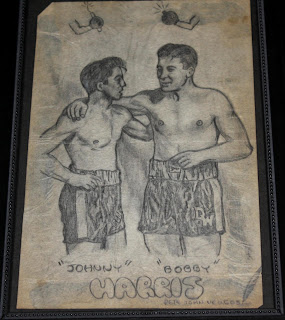 This is an old pencil drawing that someone did of my dad and my uncle Johnny.  Its on some pretty frail,old paper so I had it framed.  My uncle Johnny was a character.  My dad told me that when they were in the army together one morning they were supposed to go on some long hike with all their gear in their backpacks.  My uncle told my dad, " There's no way I'm gonna carry all this crap all over God's green earth!"  So he just put a little food in his and stuffed the rest of it with wadded up paper to make it look big and fat.  Couple of miles down the trail the sergeant noticed my uncle cruising and checked his bag.  When he saw that  my uncle was basically carrying air around in his backpack he made him fill it up with dirt and drag it around the rest of the day.  I would pay out my nose to have seen some of that stuff go down.  I like the way the artist drew a couple of bombs as their hands up at the top. 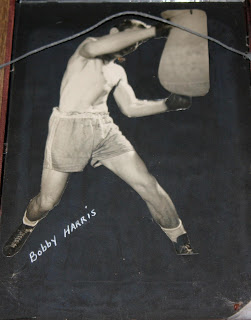 This is my dad putting in a little training.  Those legs don't look too shabby.  He could've turned a gear in anger I imagine.