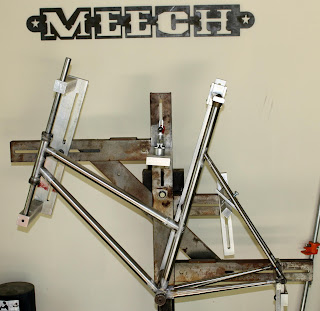 Yesterday i threw the mixte-style frame back in jig to try and get it finished up.  I've been bouncing back and forth on a couple of things and this wasn't a priority but now I'm back on it.  This is actually a bike that I started building for my wife after she told me she would like to have a "normal" bike.  I mentioned in an earlier post that I had no intentions of making more frames of this style unless I got some request for them and a couple days after posting some photos I got a call from a bicycle polo guy who just happened to buy one of my cross frames.  I knew people played bicycle polo but I don't know anymore than that.  It does sound like a cool way to pass a Saturday afternoon, or whatever day they decide to play on.  Anyway, I don't think they are wanting any S3 Superlight tubing on their frames, probably something more like straight-gauge water pipe.  Something that will handle a mallet-wack to the down tube.  It makes me wonder if under extremely intense polo circumstances if some of the players take some anger out on their competitors bikes.  You may not want to show up at a bicycle polo match on your cute carbon fiber, Alberto Contador replica, with the $3000 Zipp wheels.  A pissed-off goalie can wreak havoc on just about anything.
GOOOOOOAAAAAAALLLL!!!!
"Oh yeah."   SMMAAASHED TOOOOPPPPP TUUUUBBBBE!!!
"You BASTARD!  This was a Christmas present."
"Great, go tell Santa and maybe his elves will fix it." 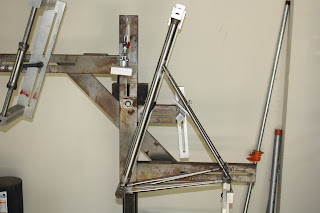 I always tack the rear triangle first. Then I can throw a wheel in it and if something is out of alignment it just makes it a little easier to fix.  Its just personal preference.  When I first started building frames I always built the main triangle first.  Six of one, half-dozen of another as far as I can tell.  I prefer to get the hard part over with first. 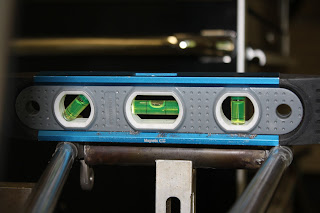 I always throw a quick level on the dropouts and chain stays before tacking. 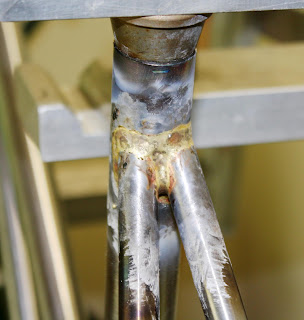 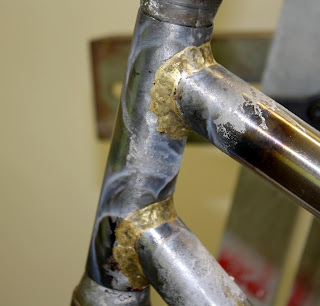 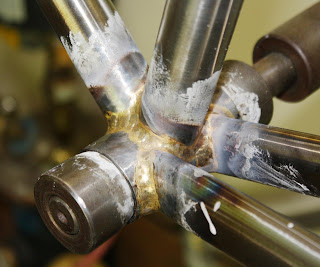 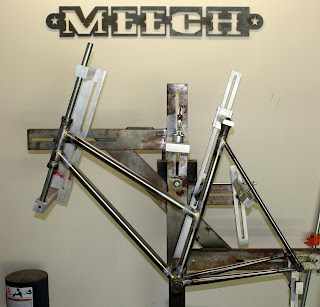 I braze the bottom bracket area last and then throw it in the jig to let it cool off.  Its definitely the area that receives the most heat so if something does get out of alignment it can only benefit from cooling off in the jig.  If the frame needs tweaking its usually not more than a couple of millimeters.  Quite a while back some builders on one of the forums told me to braze in a sequence.  For example, 12 o'clock to 3 o'clock and then 12 o'clock back to 9 o'clock, then 6 to 3 and 6 to 9.  It seems to have helped quite a bit at keeping the frames straighter after brazing.  Thanks to whoever you were.  A couple of braze-ons and some clean-up work and this thing will be ready for some paint.  Since its my wife's bike it will probably end up being painted something like pink and green.  Its her call.  I still think I can throw  some aero-bars and a disc-wheel on this thing and lay down a good time trial.  We'll never know.  Website is getting really close, just a little tweaking.  Thanks for checking things out.  Chao. 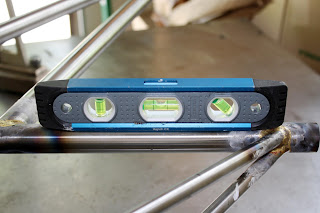 This is what I like to see when it comes out of the jig.  For the super-tweak you have to break out the height gauge.  This seat tube had a 1 millimeter difference from the bb area to the top.  Oh the humanity.  When I started building frames 4 yrs. ago I checked my Scott Cr1 just for the heck of it, I assumed it was perfect, it looked perfect, and it was off by 4 mm.  Now excuse me while I rid myself of a millimeter.
Posted by MEECH at 6:39 PM