Here are a few "before and after" pics of the recent work I have done on the carbon frame.  Laying fillets down with brass and a torch is a little more fun than with epoxy and shredded carbon tow, but with some rubber gloves and a popsicle stick you can build what seems to be a pretty solid bond.   And whether your fillet is melted brass or epoxy/carbon tow they both have to be cleaned up and smoothed out and one is no easier than the other.  I expected the fillets would add more weight than what they actually did.  The frame was 2.22 lbs. before the fillets and after it had only increased to 2.28 lbs.  I am hoping that the carbon patches don't add too much either and maybe I can keep this thing down around 2.5 lbs.  I added the water bottle bosses this morning.  I carefully drilled some pilot holes and then increased the size slowly with a Dremel tool.  I just epoxied in some steel bosses that I had because I don't have the little pop-rivot gun that I have seen others use.  I believe the epoxy will be strong enough however only hard miles with full water bottles will give me the truth.  H2O bosses aren't weighing heavy on my mind right now, I am more concerned with being able to dance on the pedals up steep hills and slamming on the brakes at 50 mph without hearing cracking noises, and should one of my frames get hit by a car I hope it smashes the car all up, kinda like the time our Chesapeake retriever was fetching the football and got hit by a Mazda RX-7.  He dented the car all up and still brought the football back.  Should anyone ever smash up their MEECH frame just give me a shout and we'll work some sort of crash replacement out. Other than a couple of cable guides and a derailleur boss I am just about to the vacuum bagging part of things, and seriously, how hard could that be, just stick the frame in a big garbage bag, plug it in, and flip a switch right?  I still don't have my vacuum pump yet but it won't be long.  I already have it picked out.  Stay tuned. 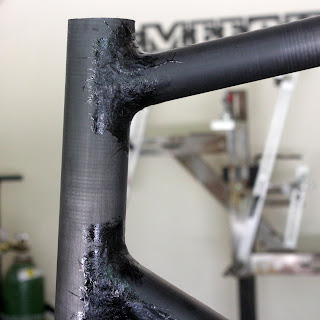 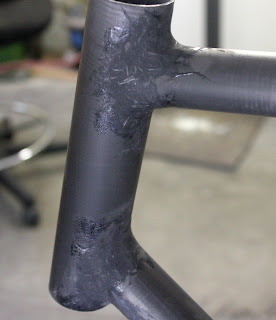 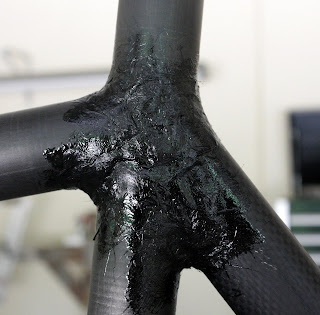 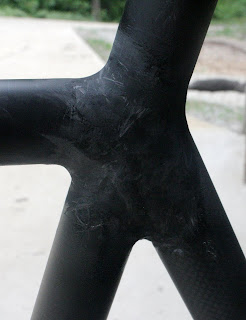 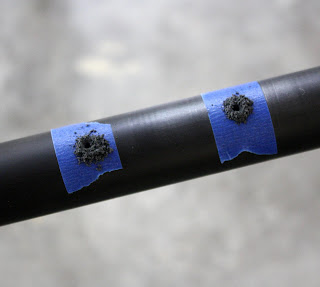 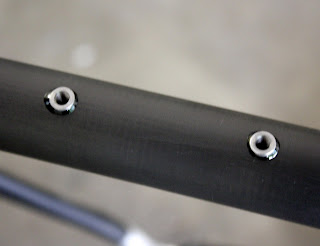