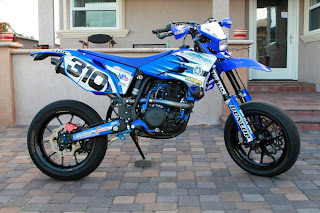 I know this doesn't have anything to do with bicycles but more with the need for occasional speed that I have in me.  I always loved riding motocross but I just can't do it anymore.  My body can't handle it.  My right knee is just hanging on and my hips aren't in good shape either.  The last few times I rode a MX bike it was more painful than fun. I've been really hung up on Super-Motos for a while.  I love them.  You have the MX bike but its street legal. Best of both worlds right?  I'll start checking them out and then I'll push it to the back of my mind but then it always comes back shortly.  The other night on Ebay there was a KX 450F that had been made street legal and it was stacked from front to rear, even had a pair of passenger footpegs that bolted on should you want to take your lady for a ride.  Last night I was looking through some of them and thought I'd post a few of my favorites so here they are. 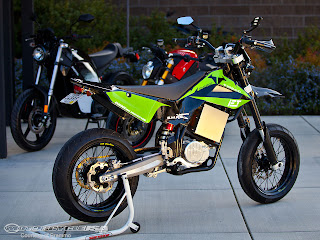 I can live with this one. 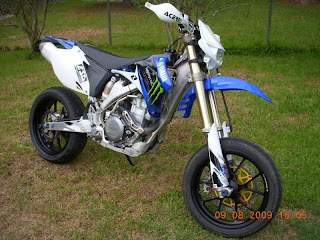 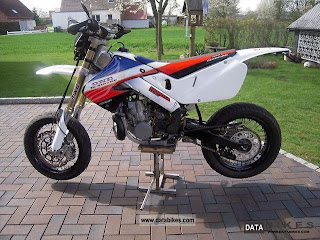 I've never been much of a Honda guy but I posted this for someone who might be. 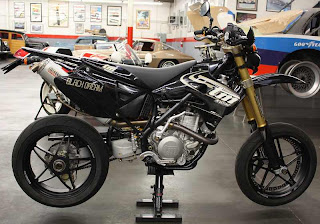 This is cool but I've never really been into the blacked-out look.  When I think of Super-Motos I'm thinking of racey hot colors that stand out, afterall, if you're going down a city street at 95+ mph you want to be seen.
"Ummm, is there a problem officer?"
"Sir , you were going almost 100 mph."
"I can explain officer.  In my quest to get a little more low end power out of my bike I took one tooth off the front sprocket and it robbed me of nearly 10 mph off the top end. Officer, if you would consider just giving me one more chance I'm sure I can break 100."

I'm thinking black and yellow on the color scheme. 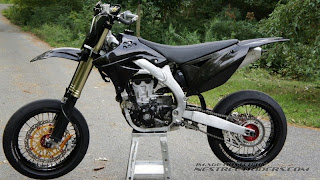 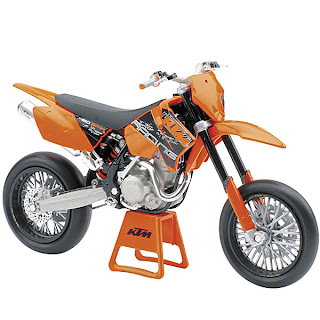 KTM has been at the forefront of SuperMoto since the beginning.  I actually had a KTM SuperMoto 640 years ago but I wasn't happy with it because it didn't have the seat height that I thought it would have.  MX bikes have a normal saddle height of over 35 inches, some even upwards of 37-38, which is what I like being tall and long-legged.  The bike showed up and it sat around 32 inches and I knew I wouldn't have it for long.  Thats the reason I prefer modifying a motocross bike.  Upon closer inspection I realize that this photo is of a KTM model toy. It looks good though. 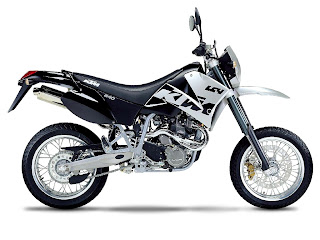 This is the one I had.  Its not bad but it needs more of a modified look.  It appears that it has a nice tall saddle height but when it arrived it didn't and I was immediately bummed out. 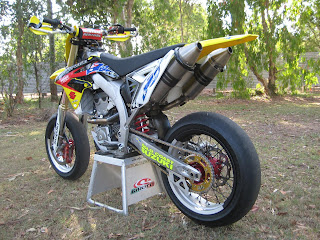 How cool is this?  This looks like something you could leave the planet on. 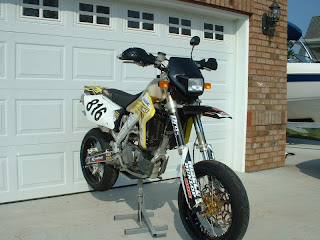 This ones perfect for me. 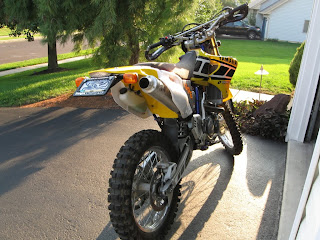 I dig this one because its still full on MX but street legal.  This is actually more me than any of them however I would want some street tires for performance reasons. 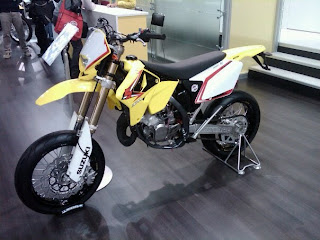 I saved my favorite for last.  This RM 125 is a little under powered for street riding, you'd be putting rings in it every weekend, but it would be a blast to fire up and run down to the corner store on. Notice its a 2-stroke, my neighbors would probably have a change of mind about me.  Check out the disk rotors on this thing.