Chris Horner Did It! 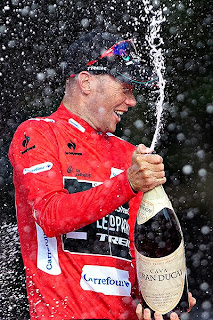 Chris Horner is leaving la Vuelta with the red jersey.  He put on an incredible climbing  display over the last three weeks across half of Spain and beat out some very tough competitors, namely Vincenzo Nibali, Alejandro Valverde, and Joaquim Rodriguez.  There seemed to be something interestingly special about Horner from the very beginning of the tour.  They said he was extremely calm and confident and just genuinely enjoying every moment all the way through the race.  He never got nervous even before his final test up el Angliru to secure his victory. He had been injured or recovering from injury almost all season long and was probably just super-stoked to be racing his bike again.  He's almost 42 years old and has become the oldest rider in history to ever win a grand tour.  I think this is sufficient evidence that riding a bicycle keeps us younger.  The spanish press used the word abuelo to describe Horner, which normally translates into grandfather or perhaps can loosely be thought of as 'old man' but I don't think either of these is appropriate for describing Chris Horner.  Chris Horner is just a pure lover of bike racing from head to toe and has dedicated his life to it, so winning this Vuelta was very well deserved. Not only that, while being a great bike racer all these years, Horner kind of always seemed to go under the radar and never really got much attention, mainly because of Lance, however I think this proves he is definitely one of America's greatest bike racers, and definitely one of the most genuine. I think even his competition was happy for him.  Felicidades!

Hopefully Horner will be racing for the U.S. at the World Championships.  Its supposed to be a climber's course and I can't imagine anyone would have any better form than he does if he can ride Nibali and Valverde off his wheel.  That would be an exclamation point to a wonderful bike racing career.