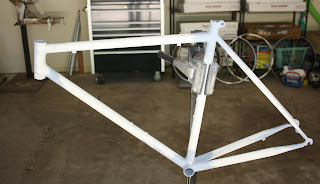 I got Jonathan's frame and fork all primed and prepped and hopefully this afternoon I will get to do some painting.  Its been really hot and dry around the whole area for quite a while and then this week the rain moved in and it got cooler, less than ideal painting conditions as I don't have a professional paint booth.  I've been transforming our shed out back into one.  I've been collecting every little bit of info I can get, from every painter this side of the Mississippi, and the other, trying to get a speed-degree in Painting 101.  When I get into something I start reading, researching, and asking a million questions to whomever may know something.  If somebody told me there was a hillbilly 20 miles outside of town that knew everything I needed to know about painting, but he carried a shotgun and didn't like bicycles, I would probably still try to find some peace offering and go up there to pick his brain.  Some of those guys freak me out though.
Once I was driving back from Little Rock through the hills and there are like a hundred little antique stores along the way, they all look the same to me.  So anyway, I passed one little old looking shop out in the middle of nowhere, it was a cross between very run-down/unique. I kept thinking, "I bet that place has some cool stuff."  So even though I really wanted to get home I turned around and went back.  There was just one old car parked off to the side, the parking lot was just grown-up weeds, and there was no open sign or welcome mat or anything like that.  Just a half-open door and I could see a light on in the back. So I pushed the door open slowly and went in, kinda nervous. I felt a little like a mouse being teased with cheese. There was so much junk in this place I couldn't really focus on one thing, except that there was nobody around. Everything was covered in dust and cob webs.  I kept saying "hello", "anybody home".  Then I started noticing saws and axes on the wall, pitch-forks, ropes, etc., and I started getting a creepy feeling, and then through the window in the back I saw something move out in the woods and that was enough. I bailed, fast,very fast.  Didn't need anything, didn't want to talk.  It was probably just some old-timer with a l00 years of stuff but every since I saw Texas Chainsaw Massacre I don't hang out in places like that, especially alone. I was braver than usual just by getting out of my car, much less going in.  I didn't feel secure again until I was going 60 mph, and even then I kept looking in my rearview mirror.  Of all the scary movies made, not much of it scares me except the crazy hillbilly movies.  Ever watched Rob Zombies "Night of a 1000 Corpses?"  Not really scarey, just creepy sick.  I can live without that stuff.  Let's change the subject.  Think pretty girls and bicycle races.  Tour day France next month.  Thats more like it. 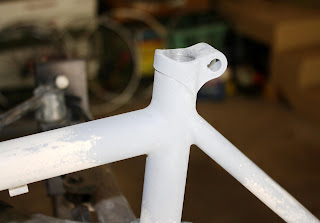 I prime the frames with a 2k epoxy primer and then hit the joints with a couple of shots of filler primer to smooth everything out just a little better, then sand the whole thing down super-smooth. 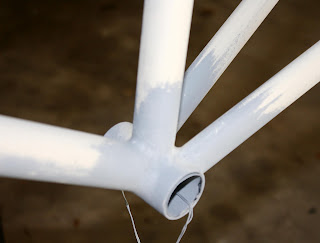 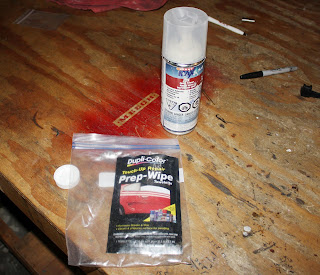 This is the stuff I'm using.  I think its just called Max epoxy primer.  Its not your everday primer that you get at Autozone.  Its made in Germany and it contains a catalyst that you break before shooting.  Its about $20 a can, which isn't cheap but its exactly the same stuff that a pro would shoot through a gun and you don't have to mix anything or dispose of leftovers in the appropriate manner.  Only catch is that once you break the catalyst you need to use it within a day or so because it won't last.  However they did tell me at the paint store where I buy it, that if you don't use it all up you can put it in the fridge and it will last up to a couple of weeks or so.  Not sure about that because I try to use it rather quickly.  I don't really want that stuff just sitting there next to my mustard and pasta sauce though.  Those little prep wipes are perfect for cleaning and degreasing the frame before shooting.  They're just a little cloth with something that smells like diesel or kerosene but they're convenient and only cost a buck and some change.  If you keep them in a ziplock you can get a couple of uses out them. 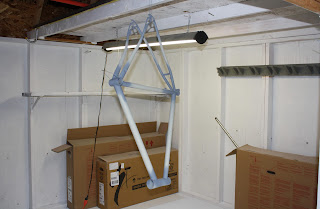 Here is my transformed shed/paint booth.  I need one more light and in the winter I'll need a heater.  Its got a couple of window to run air through and I keep the doors open to air it out.  A friend told me to paint it white and that helps out quite a bit.  I thought it was gonna just take a $20 gallon of paint and a couple of hours to do.  Nope, you're wrong, as always.  Two days and three gallons.  Its done now.  Please take your shoes off before entering and no food or beverages allowed inside. 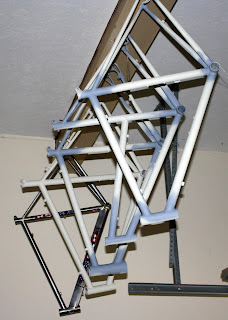 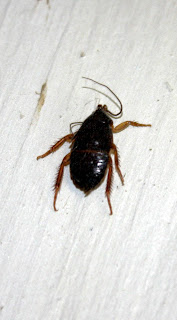 I found him dead on the floor this morning.  He either had way too much to drink last night or the clear coat fumes got to him.  Paint fumes aren't good for you however the clear coat is actually the most dangerous.  I was told to cover your entire body before shooting clear.  I wear long pants, long-sleeves, hat, glasses, and a respirator.  When I started clearing the fork yesterday I forgot to put the respirator on and clearly I noticed something didn't seem right.  So when I realized I just pulled my shirt collar up over my face and finished that coat and then of course got my respirator.  But then later in the afternoon I kinda had a headache/fuzzy feeling all day and I started getting worried.  I went for a quick spin yesterday evening to try and clear my head but I think it may just be my ears are messed up from going swimming the other day.  I hope.  I am really enjoying painting the frames right now but I don't want to end up like this guy.   I thought roaches were supposed to withstand a nuclear attack.  Yeah nuclear, no problem, but this is clear coat.  Please don't keep the clear coat in your fridge, its probably not wise. 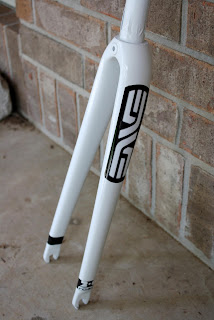 I did finish the fork yesterday.
Posted by MEECH at 4:53 AM