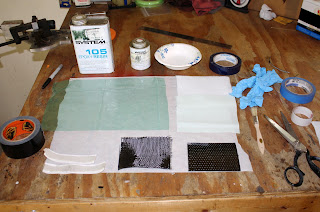 A couple of quick pics of some carbon repair work I did on a frame.  I've been working for two different Jonathans here lately, one from Pennsylvania and the other from here in Arkansas.  Here are the only supplies I needed for this repair.  I used some pretty heavy uni-directional for the first wrap and then a couple pieces of plain weave in order to try and match the frame.

I first just filled in the cracks with some epoxy to get a smooth surface.  I actually had a good idea of how to start this repair after watching a video by The Project Junkie on You Tube.  I'll post a link later.  I believe his name is Mark and he does some interesting work, nice carbon repairs.  I've built a carbon frame but thats not necessarily the same work as fixing busted carbon.  I think if someone is good at fixing broken carbon frames they'll be able to build a pretty solid carbon frame. 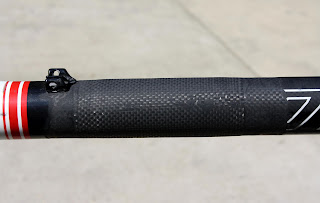 The seams of the patch are visible.  I've seen some repairs done by professionals that you can't even tell anything has been done.  All I can say about that is I hope to learn how.  This finish work is completely raw and if this had a couple  coats of clear on it I think it would blend a little better, not quite as noticeable. 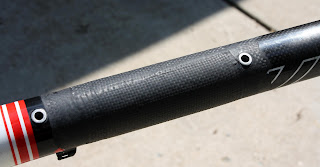 The underside of the tube. 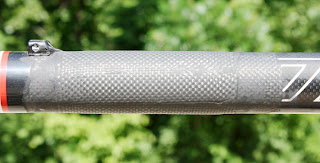 My primary concern wasn't being able to fix the tube, I was confident I could do that, but I wanted it to look good as well.  I was worried about there being a bulge in the middle of the tube after the laminate was laid up.  Even though you can feel a little rise when running your fingers across it I was pleasantly surprised to see that everything laid down as good as it did.  This is 3 layers of carbon and the uni was some pretty beefy fabric. This should be good and solid.  Jonathan was wanting to leave everything in the raw as he's only concerned with it being rideable but if you were gonna do a complete repair with paint and all you can feather those seams out with some filler and then paint it, add some new decals, and then some clear would make this repair unnoticeable.  This was my first carbon repair job and I'm hoping to get some more.  If anyone has any broken carbon frames you want to get back on the road.  Send me some pics.  Thanks for checking things out.
Posted by MEECH at 7:13 AM