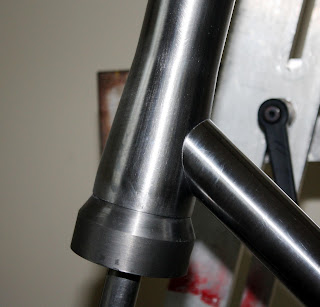 With the exception of the first couple of frames that I built this frame has been some of the toughest mitering that I've done.  The seat stays gave me fits only because it was a Monday and I guess my head was else where.  This bell-shaped head tube was tough but honestly not that bad.  The other day when it arrived I immediately did a test run to see what  was in store for me and I had the tube mitered perfectly within 15 minutes.  This one took me quite a bit longer, mainly because I took extreme care since I had only one of these 35mm tubes.  Nothing like ruining the one tube you planned on using and then having to order another, pay again, and wait another week for it to arrive.  I always cut the down tubes a little long so that it gives me some room to work it into place.  I took my time whittling this one down but it was worth the wait. A water-tight fit is the result. 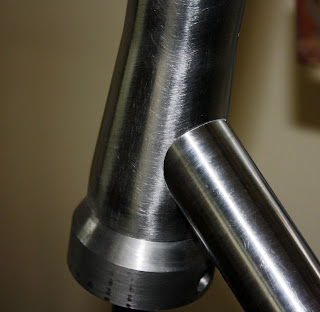 I would be lying if I said I wasn't proud of this miter.  Its the first one I've done on a tapered head tube.  In these close-up shots the bell-shape is hard to see. Oh its there though, I'm all sure. 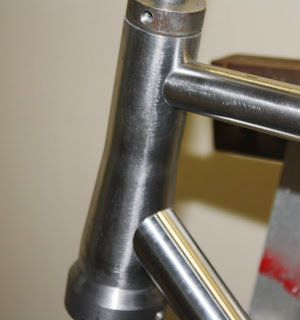 This pic is a bit fuzzy. 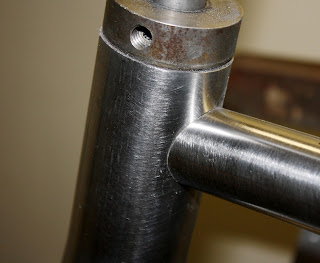 This is a better look at the top tube. 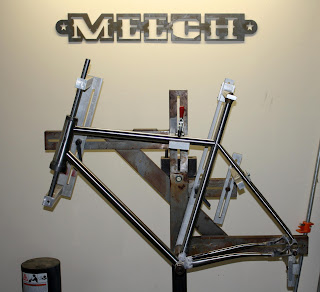 This frame is basically a 57cm but its a very tight build so it looks smaller.  My original plan was to put carbon tubes in the top and down tubes in order to shave weight, that means cutting this thing up.  I'm gonna wait and see what the scales say before breaking out the chain saw. I don't think its gonna be quite as heavy as I originally thought but its gonna weigh a little more than my usual cross racing frames.  Those disc-dropouts have some pesos in them, and the head tube isn't exactly S3, not to mention the 35mm down tube. This thing is gonna roll like a locomotive though and the disc-brakes will stop it, should you want to stop it. 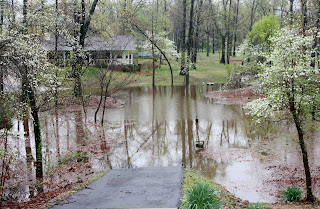 Not again.  You may remember me posting a similar photo like this one last year.  It had rained for 3 straight days and we couldn't drive out of our driveway.  This happened only after Tuesday night and its deeper than last year.  Thats our mailbox down there in the middle.  Fortunately there is some sort of natural drain hole out there and this morning it was all gone but I don't understand how leaves and debris don't clog it up.  If that ever happens its gonna be bad.  Luckily we don't have alligators in north Arkansas.  I'm working on getting us a driveway in the back. Maybe it will lead up to a new shop/carbon fiber frame building facility.  Its just a dream right now but I enjoy dreaming, especially when they come true.  Like Ty Webb (Chevy Chase) said in Caddyshack, "See the ball, be the ball." Or something like that. Later alligator.
Posted by MEECH at 7:28 AM