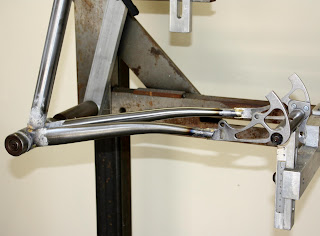 I've been waiting on a couple of much needed items for 2 different frames so I've been bouncing back and forth doing as much to one frame as possible and then back to the other.  This frame here is a cross frame I've been planning for a while and just got started.  Its gonna have disc brakes and I'm going to use that swanky, tapered head tube that I showed a while back.  I decided to swank-out the chain stays as well.  They are True Temper's s-bend 'cross chain stay with a little added MEECH-flair. 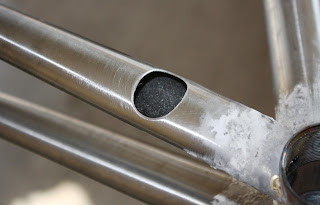 I like the cutout, chainring clearance look.  I first used this on Branton's 'cross frame a few weeks back and he said it feels pretty solid so I think you'll probably start seeing more of it.  I was concerned about flex issues from filing out close to half of the stay but after you braze in a solid piece of tubing I don't think they are going anywhere.  After all, with the wheel locked in place both stays would have to flex, not to mention the seat stays as well. I also use some pretty beefy fillets around the bottom bracked area on my cyclocross frames, but whenever I try something new that I am unfamiliar with I'm always a bit apprehensive, let's say cautiously optimistic, until its tried and tested, then I breathe a little easier.  I'm no longer concerned.  This hole was simply filed out with a half-round. 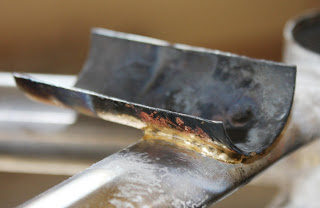 Used a piece of tubing cut in half to match the diameter of the file.  I hold it in place with a small clamp in order to tack it..., 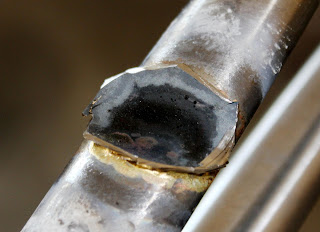 ...cut the excess off with a Dremel.  Careful with those things, they can ruin a frame real quick. 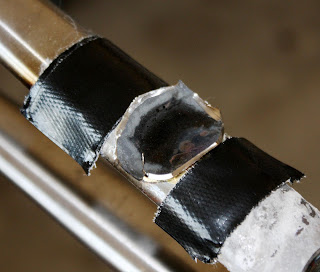 The clean-up work is the hardest part of the whole process.  I always put a couple layers of duct tape around the area just in case the file slips. 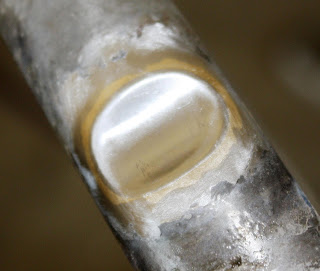 And here is the end result other than rinsing off the flux.  Super-easy and very clean.
The weather has been crazy-good these last few days.  I got out for 3 straight rides the last couple of days, I don't want to stop now.  Thanks for checking things out and have a good weekend.  If you're racing this weekend,  ATTACK!  Chao amigos.
Posted by MEECH at 11:42 AM