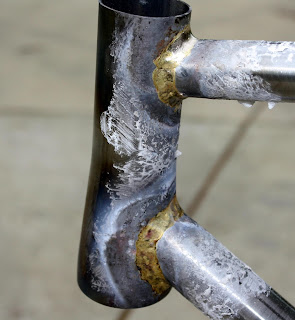 For some reason it seemed like it had been a long time since I have done any fillet-brazing.  I guess its only been a couple of weeks but I felt like I would be out of practice when I started on this frame Friday morning, luckily everything flowed pretty smooth and I got some nice fillets laid down.  Maybe this little bit of time working on other things is a good thing and when I get done with it all I'll be ready to jam on some frames.  This bell-shaped head tube makes even a 35mm down tube look small.  Thats one of my normal sized fillets however the big tubes make it look skinny.  Honestly I don't think the fillets need to be half this size to be strong enough, there would still be three times the meat joining the tubes than on a tig weld.  I know that tig welding is actually joining steel to steel however if the brass is laid  down correctly its definitely not coming off.  In every instance that I've tried to break one of my welds the tubes always tear behind the fillet.  You can tell where I filed a bit of the fillet.  It had a bit of a divot so I cleaned it up.  Almost looks like solid gold.  Gold would make the price go up considerably. 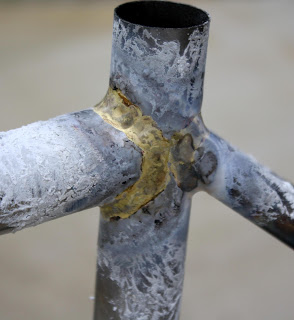 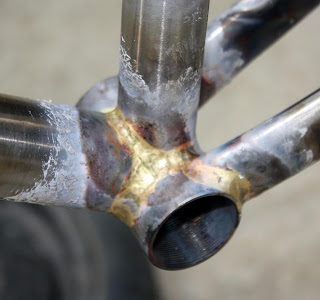 I do like to beef up the fillets around the bottom bracket area because I believe with a larger concaved fillet-braze it will decrease any flex coming from this area.  Even so, these here aren't that large.  I've tried to get away from overdoing things. 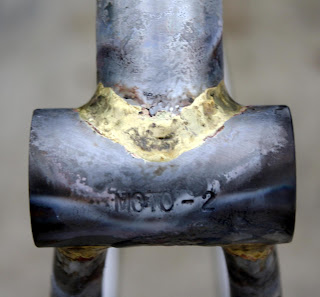 Besides the smooth transition, I prefer fillet-brazing to tig-welds because its just much beefier.  This joint here on a tig-welded frame would almost appear like a 90 degree angle and skateboarders wouldn't be able to do any tricks on it, but with fillet-brazing, the bb area is a like a virtual skateboarding park.  I'm just talking smack now.  I've got nothing against tig-welding.  The best tig-welds I have ever seen have come from frame builders. Some of them so beautiful they appear perfect, but just never as beautiful as fillet-brazing. ;) 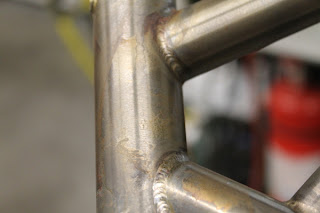 Tig-weld photo, not mine though cause I don't tig.  However I would like to learn just to know how, but I would still fillet-braze all my frames.  This looks pretty good to me but I've seen some better.  Only problem, where's the beef?  Also, its not a pretty gold color.  Sorry tig-welders.  We still love you though.
Posted by MEECH at 4:59 AM