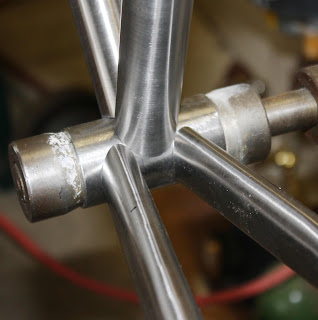 I got caught up last week and have been waiting for some supplies that I need to get here, so to pass some time I started building a different frame for my wife.  She actually has the very first MEECH frame that I built when I got back from Yamaguchi's class.  Its just a typical road frame but I had to have someone to build the first frame for. My wife is not too into cycling but she did mention a while back that she would like an everyday bike to occasionally ride around the neighborhood. The exact way she put was, "I just want a normal, regular bike."  Ok, I get it.  So its in the jig. 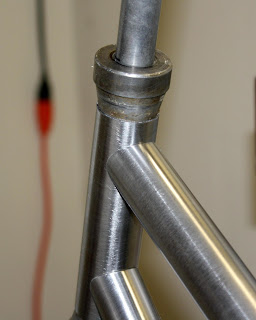 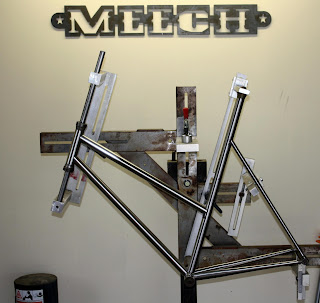 Never built a frame like this and probably won't build anymore unless I get request for it.  I started out gonna build her a mixte but I didn't have any of the long, narrow tubes that run from the dropouts to the head tube so I just opted for a simpler version.  She liked the quote un quote, "just normal" frame style and I think she already knows how she wants to paint it.  I think just to mess with her when I build it up I'm gonna throw on some aero-bars and maybe a disc wheel."  If I painted flowers or puppies on the disc she'd love it.  We discussed putting a basket on the front of it so she could put Pinky in there and ride him around the neighborhood, but after thinking it through we decided, not such a grand idea.  My wife is a bit accident prone.  She bought it hard on the first bike and basically hasn't ridden since.  I'm gonna set this one up where the brakes are dragging the rim so she can only get up to about 5 mph and that way the dog can walk beside her. 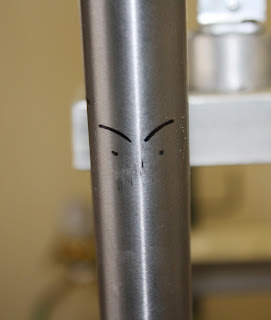 What started out as a couple of reference marks for vent holes... 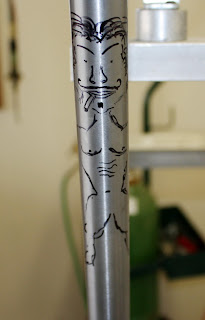 ....turned into this.  Not sure who or what it is. Some little smoking samurai guy, possible an alter-ego or something that I was unaware of.  I've been known to smoke a few cigarettes, but that was a few years ago.  I enjoyed smoking but it was just a waste of money and good health.  These days I want to live as long as I can, build as many frames as I can, and I might make an attempt at the "Over 100 hour record."  Did you see that on velonews?  On his 100th birthday a guy goes to the velodrome and averages like 15 mph.  Not bad.  I'd like to shake his hand, very gently though, it might come off.  I've only got 55 years to train for it.  I'll start this weekend. 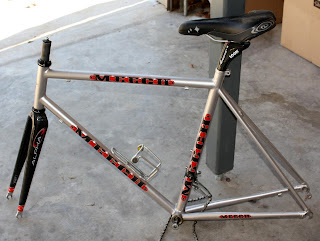 This is "the" very first MEECH frame.  You can tell I was proud of it by all the decals I plastered on it.  I was actually trying to mimick the looks of an old  Asics Carrera frame that I had.  It was very racey.  The rear triangle was a couple of millimeters off but other than that it turned out alright. This frame saw a handful of miles and one violent crash. One summer morning Anne and I went out for a ride and she lost the front end on the edge of the road.  It was pretty knarly.  The roads around here are not too smooth either, kinda rough, raised chip & seal, not what you want to be skating on.  She survived it though.  Not sure I want her to get on a bike again though.  She used to want to ride a motorcycle but I'm thinking it may not be a good idea. 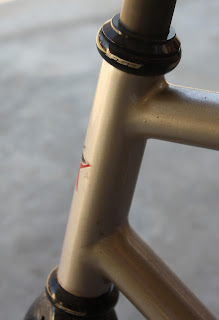 I'm still amazed at the fillet-brazing on this first frame.  It could use a bit of dusting off.
Posted by MEECH at 5:42 AM