This Is Gonna Suck! 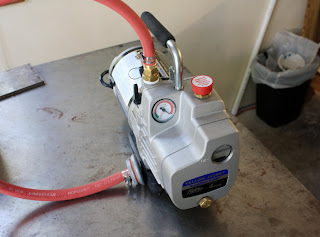 I waited and waited,  finally I got a vacuum pump.  The Ritchie Engineering Yellow Jacket SuperEvac.  Its a 1/2 hp 4 cfm 'genuwine awthenic' sucking machine.  I was playing around with it today doing some practice joints on pvc pipe cause I'm not quite ready to make an assault on the bike frame yet. I want it to look as good as possible, after all I'm gonna be riding this thing around with my name on it. Howard Stern's mother wrote his name on his underwear when he went away to college.  Where did that come from?  His book. Just a little trivia for you.  Today I learned that playing around with carbon fiber and epoxy resin on 95 degree days when the humidity is about 99%  isn't the best conditions.  Anyway, its cleaned up until the next attempt and I'm sure they'll be plenty more messes in the future.  The good news is that the SuperEvac pulled about 28 hg on my first vacuum bagging attempt. Thats vacuum pump lingo.  A perfect vacuum is 30 hg however 29 is about the max that you could hope for so it has more than enough sucking power.  The first part that I made actually came out looking much better than I expected when I put it in.  The compression kinda evened things out, but I still need to figure out an actual plan for laying the carbon patches down so its not just a big, uneven mess.  Practice makes perfect.  I think Houdini said that?  I also have to figure out how to get more pot life out of my resin, or wait for cooler weather.  If you've followed my first carbon build you know it will probably be the latter.  The first one is the hardest, hopefully.
Posted by MEECH at 5:00 PM