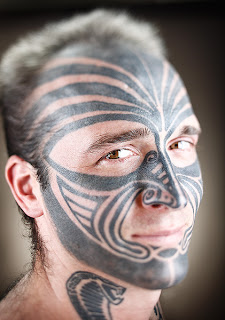 Apparently David Clinger got busted again for doping violations which garnered him a lifetime ban from competition.  Why would I comment on this?  I'm really not sure.  I don't know him, never met him, he's probably an alright guy.  The tattoo on the face is a little weird but it is nicely layed out, I like it. You know if you are out training with this cat that nobody is ever gonna harass you. He's got a really nice nose, the tat compliments it and I even like the cobra on the neck.  The ones that give me the creeps are when people, especially women, get a black widow tattooed on their neck.  It would just be hard for me to fall asleep with someone like that laying next to you. Sorry honey, my parents aren't ready for you yet.  If Clinger would just shave his neck he could probably get a job as a front man of some hardcore band. He looks a little like Scott Weiland of the Stone Temple Pilots/Velvet Revolver. I think he makes the perfect posterboy for cycling dopers.  Imagine if on your second doping offense you could either be banned for life, or, you could get your face tattooed and start racing the next weekend, but you only had 24 hrs. to make the decision.  What would the peloton look like then?   Probably similar to the Jim Rose Circus.  Ever see that?  Circus is the only word capable of describing it.  Lets try to think of some names for Clinger's band.  Too bad Circle Jerks is already taken.  Shave your neck man.
Posted by MEECH at 8:19 AM