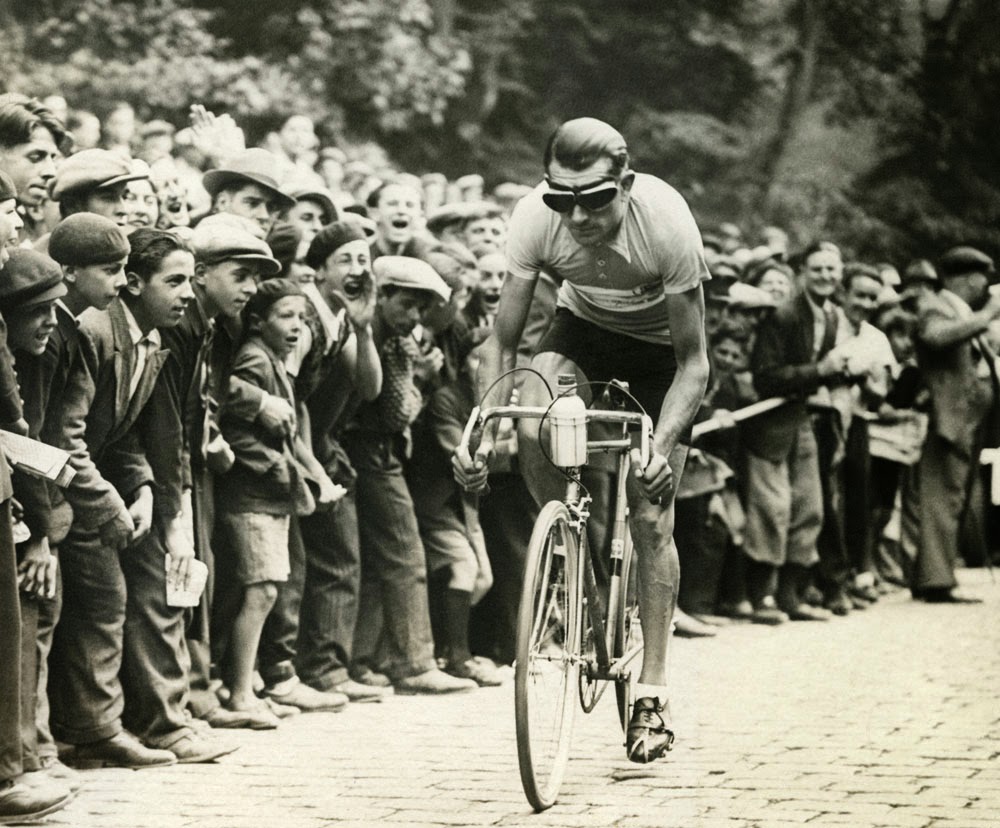 This morning it crossed my mind that with the whole gravel-road racing thing that has been building for a couple of years now, I was thinking that now may be a good time to bring back racing goggles, you know, add some flare to the sport.  Then, unfortunately, I realized that the helmet could hinder the whole 'modern goggle resurgence program' that I was dreaming of.

Do away with helmets, or at the least, give the riders a choice. I think it would give the peloton some much needed personality.  I think it would be good for the fans and the spectators.  Let's see now, multi-color lycra uniforms, goggles, no helmet, and a $10,000 bicycle.  If we could get USA Cycling to permit capes then it would appear as if a bunch of super-heros were racing.  Who wouldn't like that?

Check out the racer up above.  He looks like a freakin movie star.  This is sure to bring out some more chicks to the races, good looking ones too, not those thin, pale-colored, granola girls we're all used to seeing. If I want to see something thin and pale that looks like it could use a good meal I'd just look at myself. 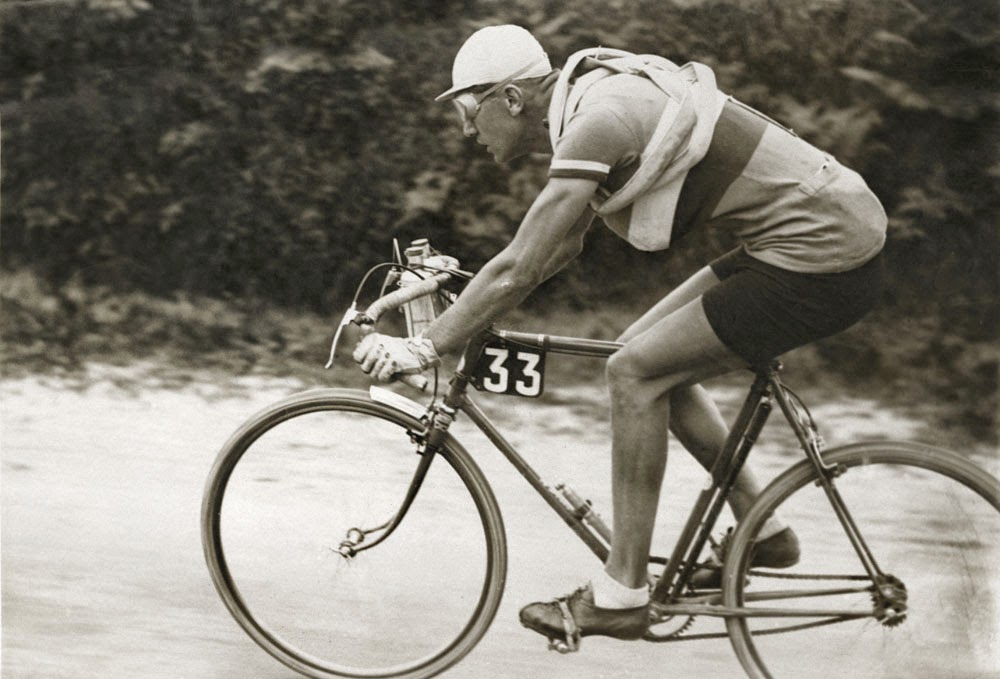 Check out how laid back that seat tube is and how thin the fork blades and stays are. Thats a pretty good-sized fella too.  With that #33 on his bike he looks like somebody.  Maybe we should give racers permanent numbers for the year based on their racing results. That way the chicks know who to go after.  If I was a good-looking girl looking for a guy, I wouldn't want to accidentally go out with some spiffed-up Cat 5.  With the number ranking system the girls would have an idea of what they we're getting into beforehand.  When she went out with her friends, I would imagine the conversation would be something like:

"Ok, so he's pretty good looking, maybe a little chubby, but its a cute chubby, he's an accoutant with a good job at a good firm,....

"...but he's a mid-pack Cat 4 rider and has to wear #4593 all year long. So anyway, our kids should be smart and well off but there probably won't be many trophies on the shelf."

"Girl, you need to get out while you still can and up your game."

I realize that some Cat 4 riders may be offended by this, but consider it motivation to push harder.  The first road race I ever did they gave me a number that said, "Citizen" on the back. I didn't even know how low I was.  I thought maybe there were a bunch of Latinos racing.  After that race, I knew I had to quit smoking and train harder.  I mean seriously, who wants to be a citizen? 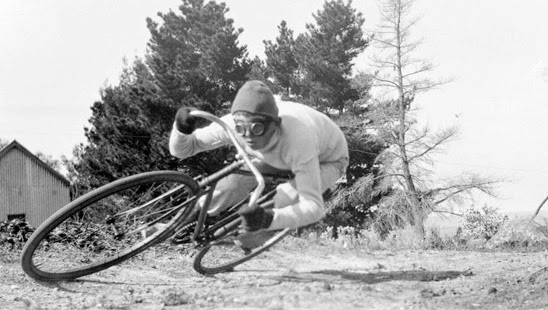 I've posted this old photo before.  Its actually on my Facebook page somewhere.  It reminds me of myself.  When I was a kid, all I ever wanted was a dirt bike.  My parents thought they were dangerous and so they wouldn't get me one.  I had to ride my bicycle like it was a motorcycle. So anyway, I saved my money and bought a motorcycle helmet and some goggles.  The first day I had them I went out and threw a leg over my old, purple Western Flyer and hauled arse wide open down the hill to hit our local neighborhood ramp.  When I first left the ramp, I was soaring like an eagle, higher than I had ever been,  but then the weight of that  $15.99 Sears helmet started pulling my head backwards and I looped out hard and landed flat on my back. 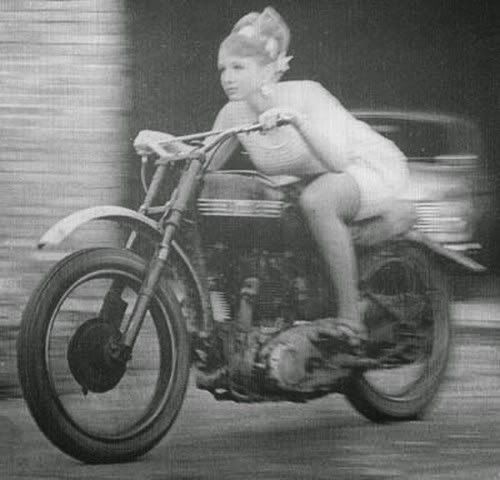 While I'm just winging it with black and whites, why not throw in some real motorcycle girls. Seriously, the website is called Real Motorcycle Girls.  I just stumbled onto it. 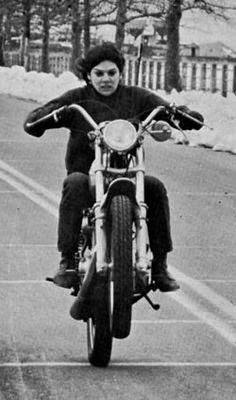 Now this is a real woman.  I'm sorry Cat 4 racers but she's not interested in you. This chick wouldn't go out with anyone but a pro, and probably only a Downhill Mountain Bike pro at that.  She's gonna toy with your head for sure. 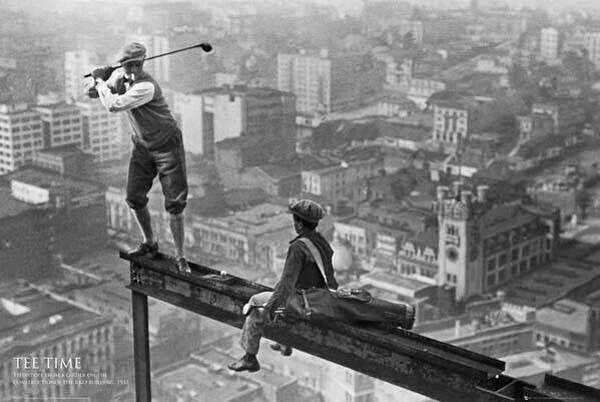 I bet this guy could get a date with her. 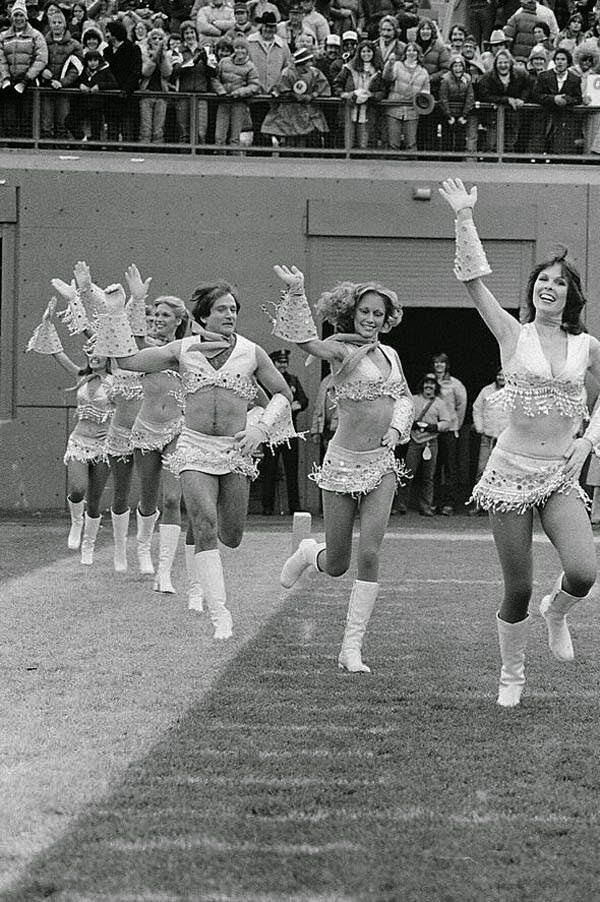 I'm guessing that a Cat 4 could get a date with the cheerleader that is third in line, maybe.