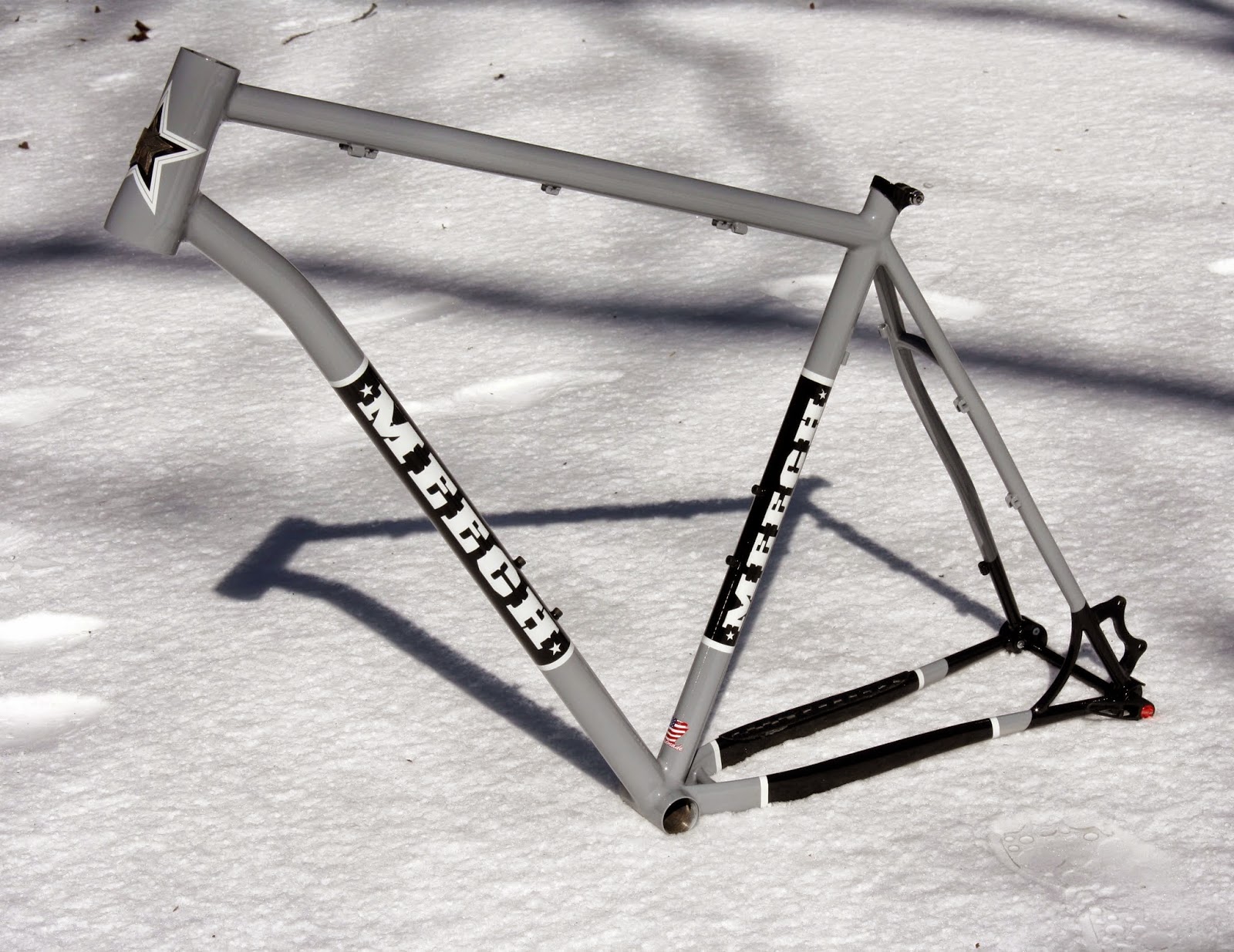 Alright, so I finally got Christian's 29er frame finished.  If this frame looks familiar, its because Christian wanted it painted identically to his cross frame. It was a rather slow build however I'm not rushing anything these days with little Jack to look after.  Granted, I want to get the frames out to everyone as quickly as possible but making sure they are right is all that I'm concerned with.  This was my first mountain bike build in a quite some time, and my first with the new 142mm thru-axle design.  Needless to say, I like it alot.  With all this snow and ice that we got doused with recently I really wish I had a mountain bike, and if I ever get caught up enough I may build me one, right after I build myself that cross bike I've been dreaming about. I can't remember the last day that I was on a bicycle and I can't see getting to ride any time soon. Sometimes its hard for me to believe that I'm a bicycle frame builder and I only have one bike.  I have a couple of carbon prototypes hanging in the shop but they're road bikes too.  I need something with some knobby tires.

I really wish I could've had a fork on this thing to make it look more complete but Christian is gonna choose the fork to suit his liking and so basically I just wanted to get a few pics to share.  The temp outside was 25 degrees but the wind was coming hard out of the north and it was the coldest 25 I've ever felt.  I just got back in from walking Dizzy this 10 degree morning and it seemed warmer than yesterday.  I've mentioned that I don't do very well in cold weather but this morning wasn't that bad.  Once I got going it I enjoyed it.  Kinda like a cold bike ride, you're freezing for the first 10-15 minutes and then everything gets warmed up.  The other night Anne and I watched a documentary called Happy People.  It was about a handful of men who lived in a small village in Syberia and during the hunting season they would basically travel 100 miles out into the wilderness to hunt.  It was no short hunting trip either.  It appeared to be months to me, perhaps the entire winter.  Anyway, the daily temperatures that they were living in were anywhere from -30 to -70 degrees.  This was on a daily basis and they were surviving with only their abilities and their dogs while living in a few small hunting cabins.  This type of living/survival amazes me.  One of the main characters told a story about the first time that he went out into the wilderness.  He was dropped off by helicopter under the assumption that he would be brought supplies on certain dates throughout the winter in order to survive. Unfortunately the help never showed up and he was faced with having to survive all on his own.  He did it and everything is peaches and cream now.  I would've most likely died looking something like Jack Nicholson at the end of The Shining. After being amazed throughout the entire film, it ended with the man riding a snowmobile back to the village for roughly 100 miles in give or take 8 hours.

"What's so amazing about that D?"

His dog ran beside him the entire way.  The dog did fall off the pace a bit and showed up at the village a couple of minutes later, but I'll give it to him. So anyway, thats what I was thinking about while I reluctantly walked Dizzy for 30 minutes in 10 degrees.

Is this a blog about bicycles or something?  Let's move on. 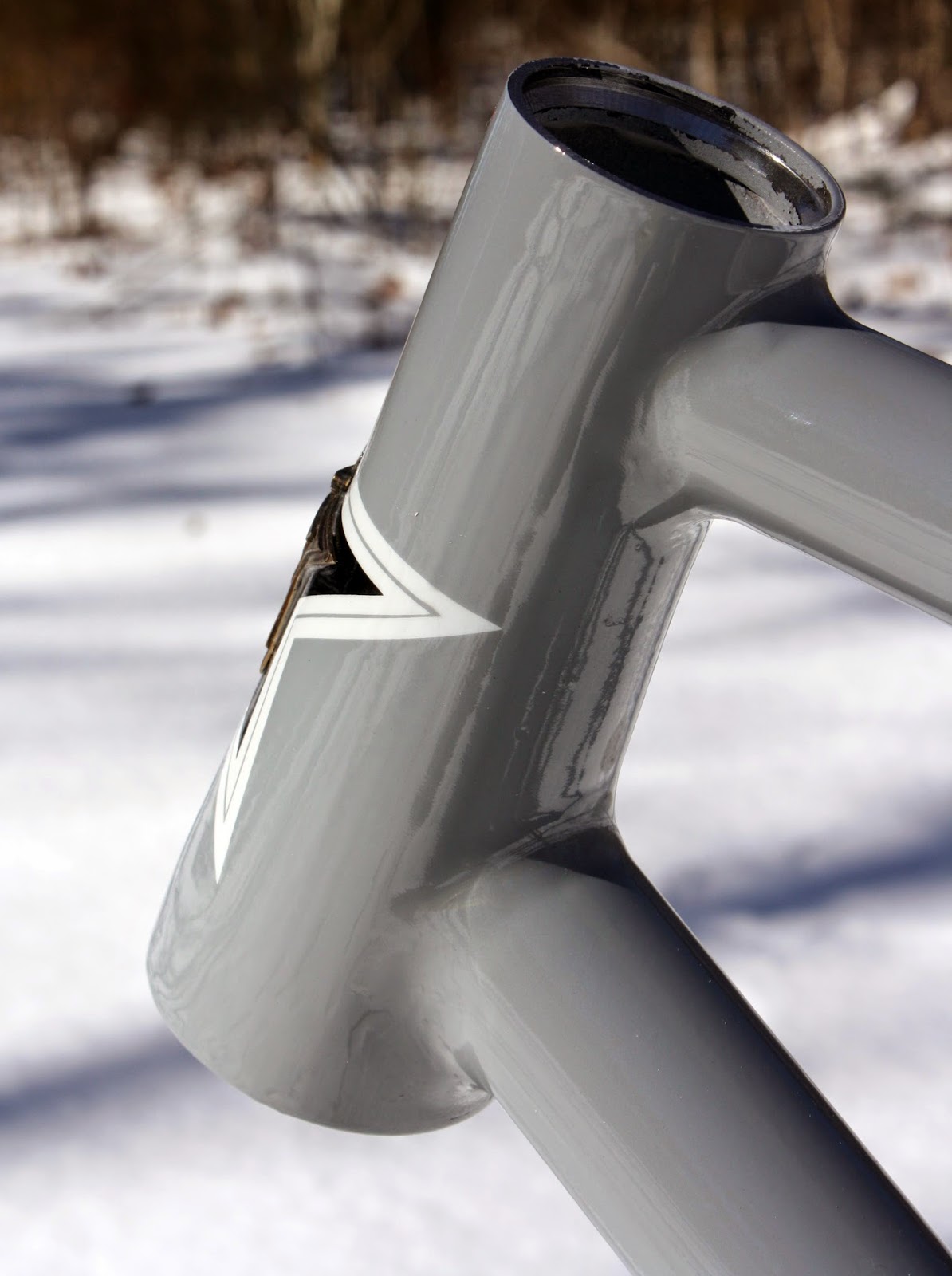 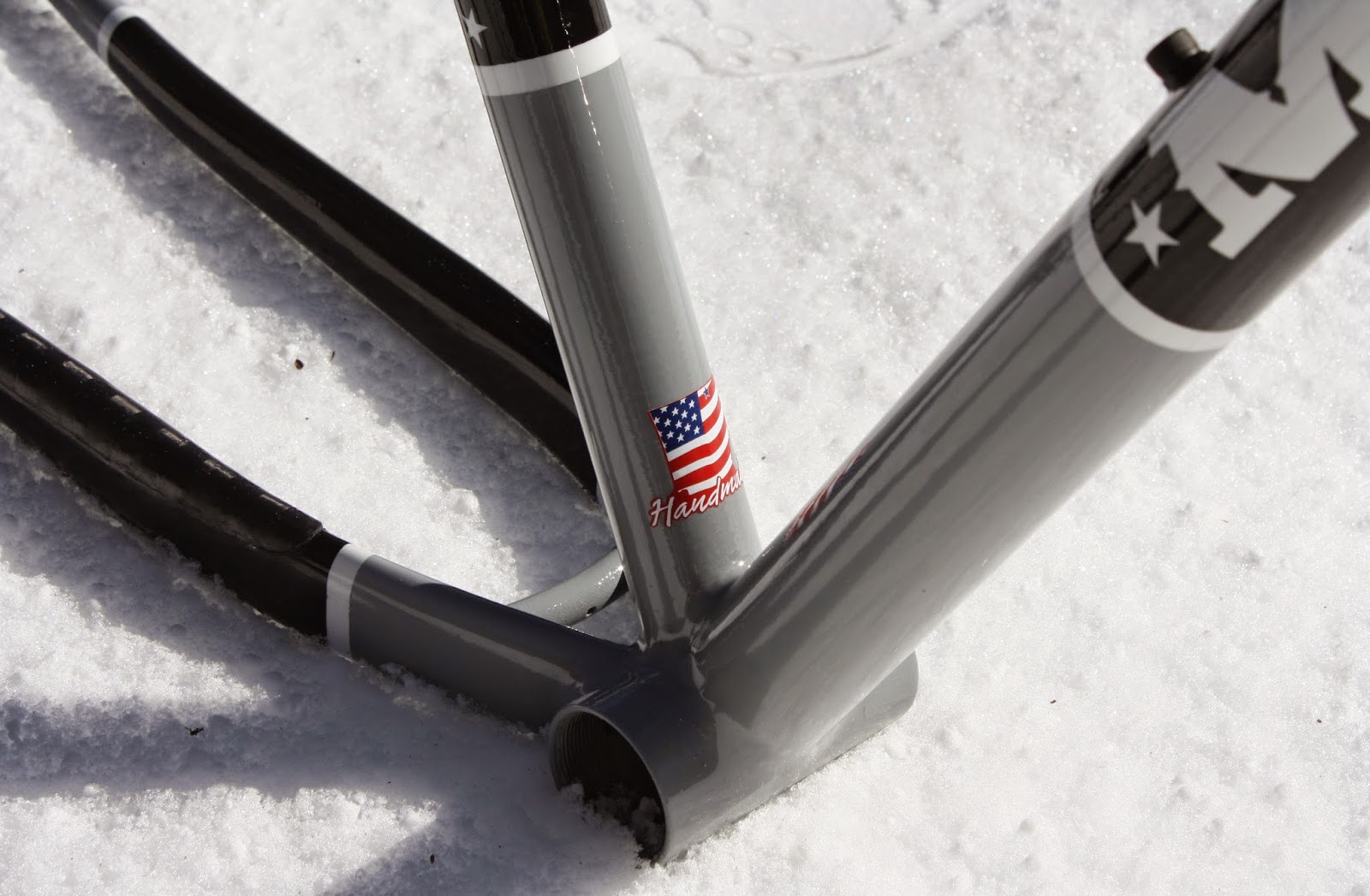 I didn't have a box wide enough to ship this in so I went to the UPS Store.  Long story short, they talked me into letting them package the frame.  In the end I agreed and everything went fine as far as I know, but I really had a hard time leaving this frame in the hands of someone else.  All the work that went into getting this thing right, from the miters on the stays/dropout juncture to getting the tires in between the stays to the painting, it was all  running through my head. Just being able to get this thing painted in the middle of February was a small miracle.  We had a short warm spell and one day was supposed to get up into the 60's.  If it was gonna happen it had to be that day because the temperature was supposed to drop into the 40's the very next day.  I woke up and put a couple of heaters in the paint booth (shed painted white inside) and once I got it up to 70 degrees I got after it.  Anyway, when I left the frame with the the people from UPS Store I was trying to imagine how I would feel if someone damaged this frame and I had to start all over.  It would've been devastating to me and I almost went back to get it.  I was on pins and needles until they called me and said it was ready.  Anyway, this is what "Handmade" means to me.  Due to the fact that this was a frame build that I was unaccustomed to, it feels like more care went into this frame than others, however after thinking about it, I know that I put everything I have into every frame I build.  When I work for someone else I don't ever want them to be dissappointed with what they get.  It just gives me a sick feeling to think I let someone down.  Whenever I make a mistake i have to correct it before I can move forward.  In an earlier post, I mentioned a brazing mistake while working on this frame and while I probably could've corrected it I just started the whole thing over, smarter mind you. 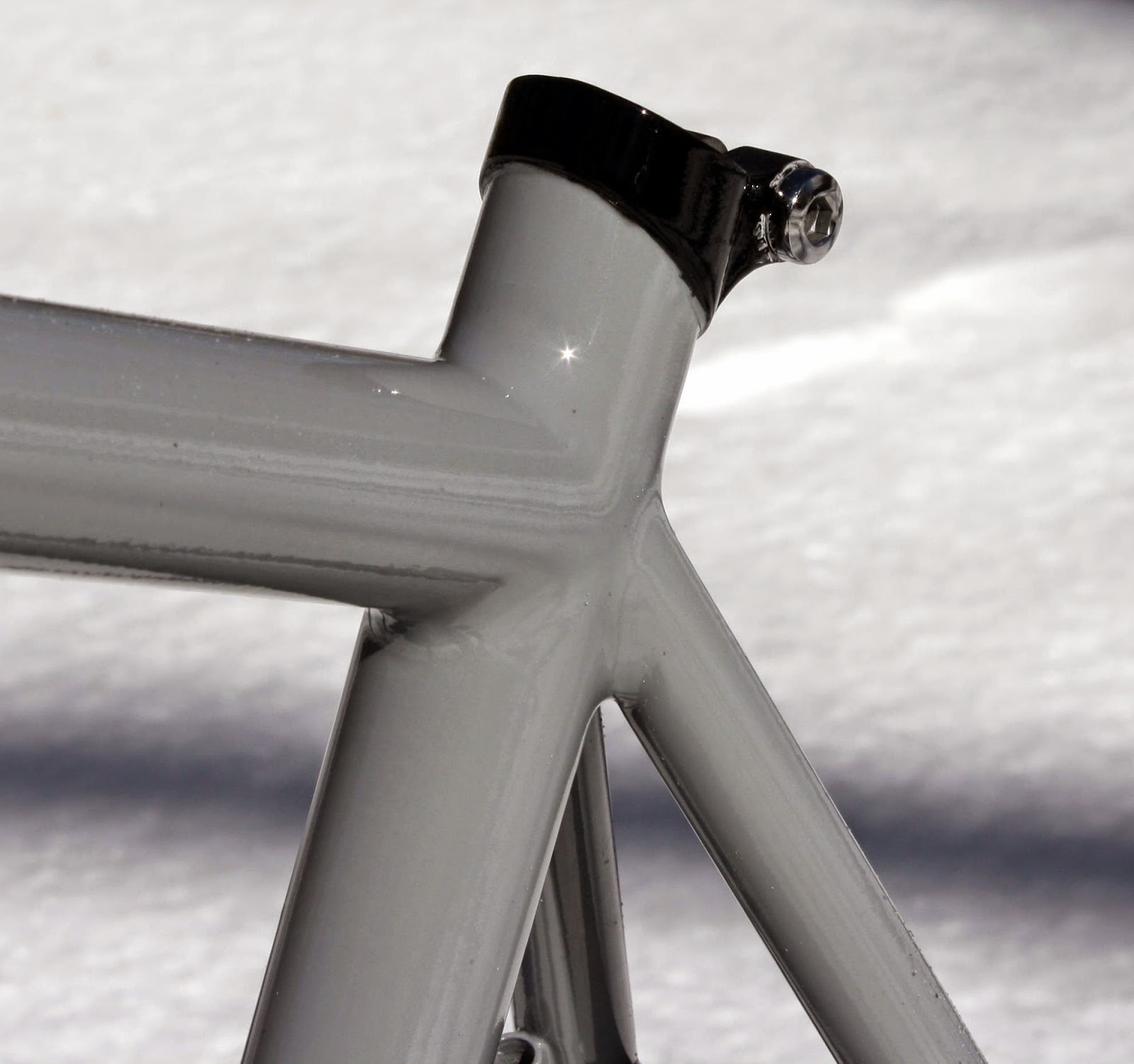 This Battleship Grey looks good up against the white snow. 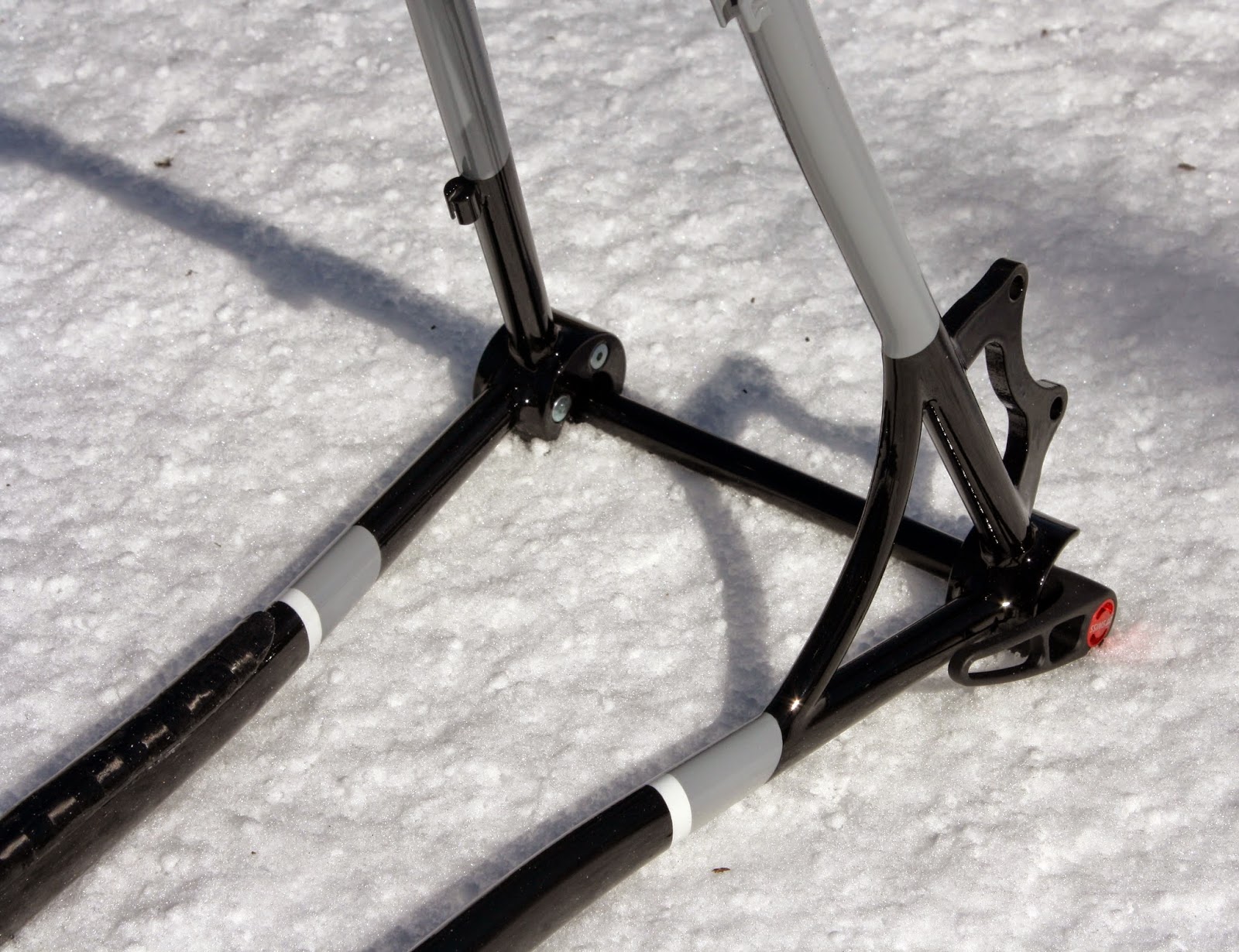 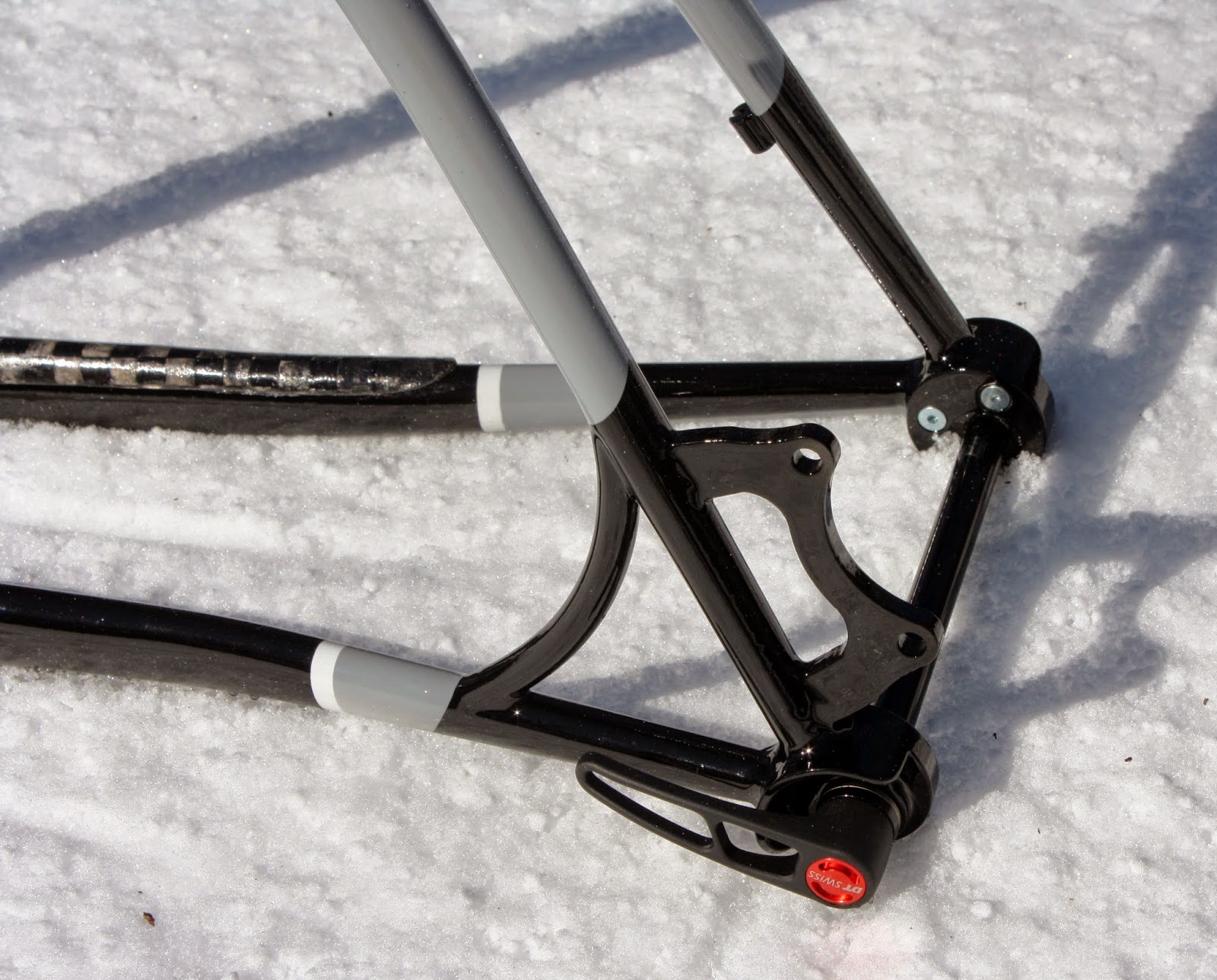 DT Swiss axle is compliments of Paragon Machine Works and its flawless.  The wheel falls into the dropouts perfectly and when you tighten the axle the tab lines up nicely. 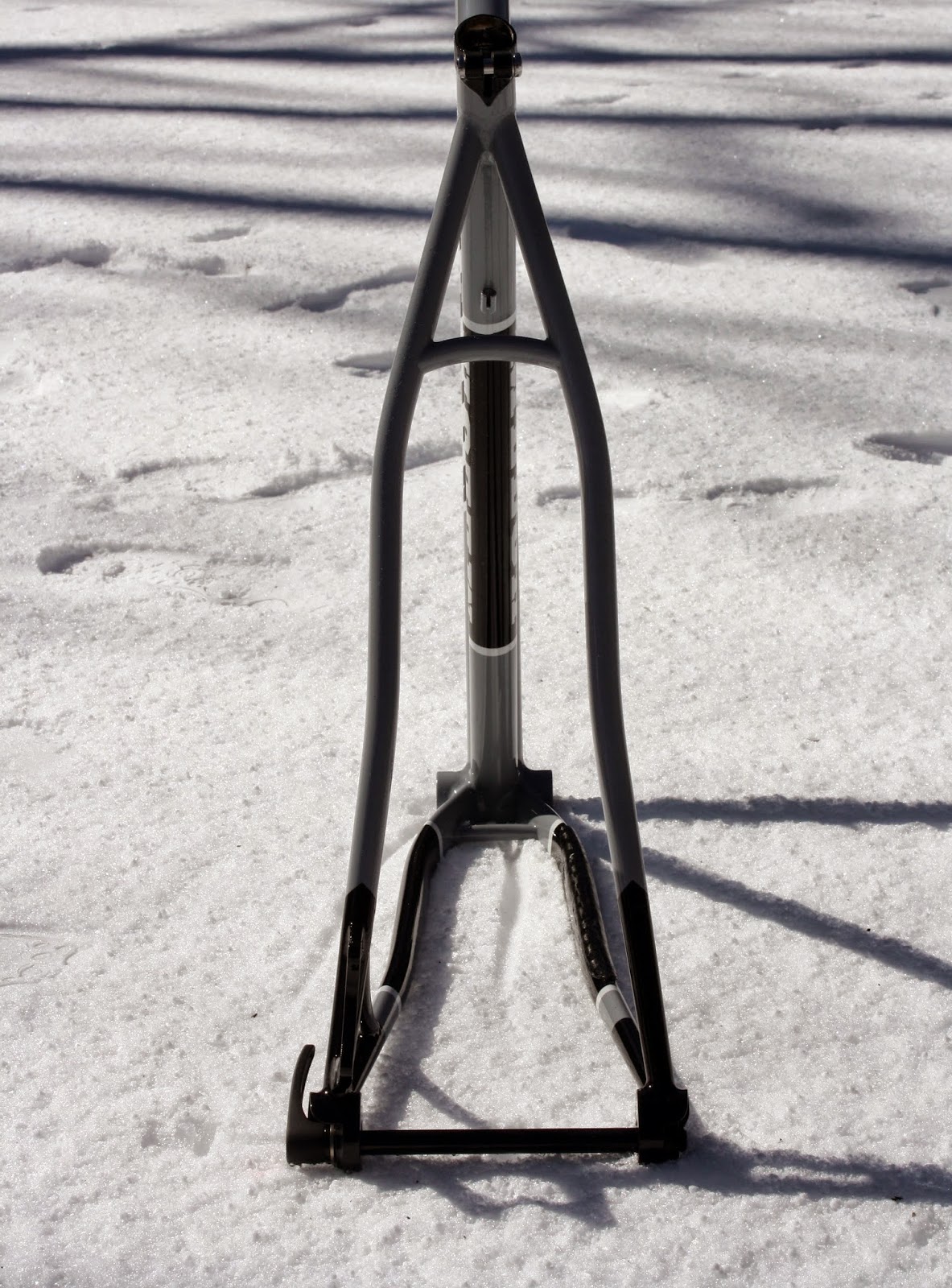 You knew I was gonna throw in a photo of some sexy hiney didn't you? 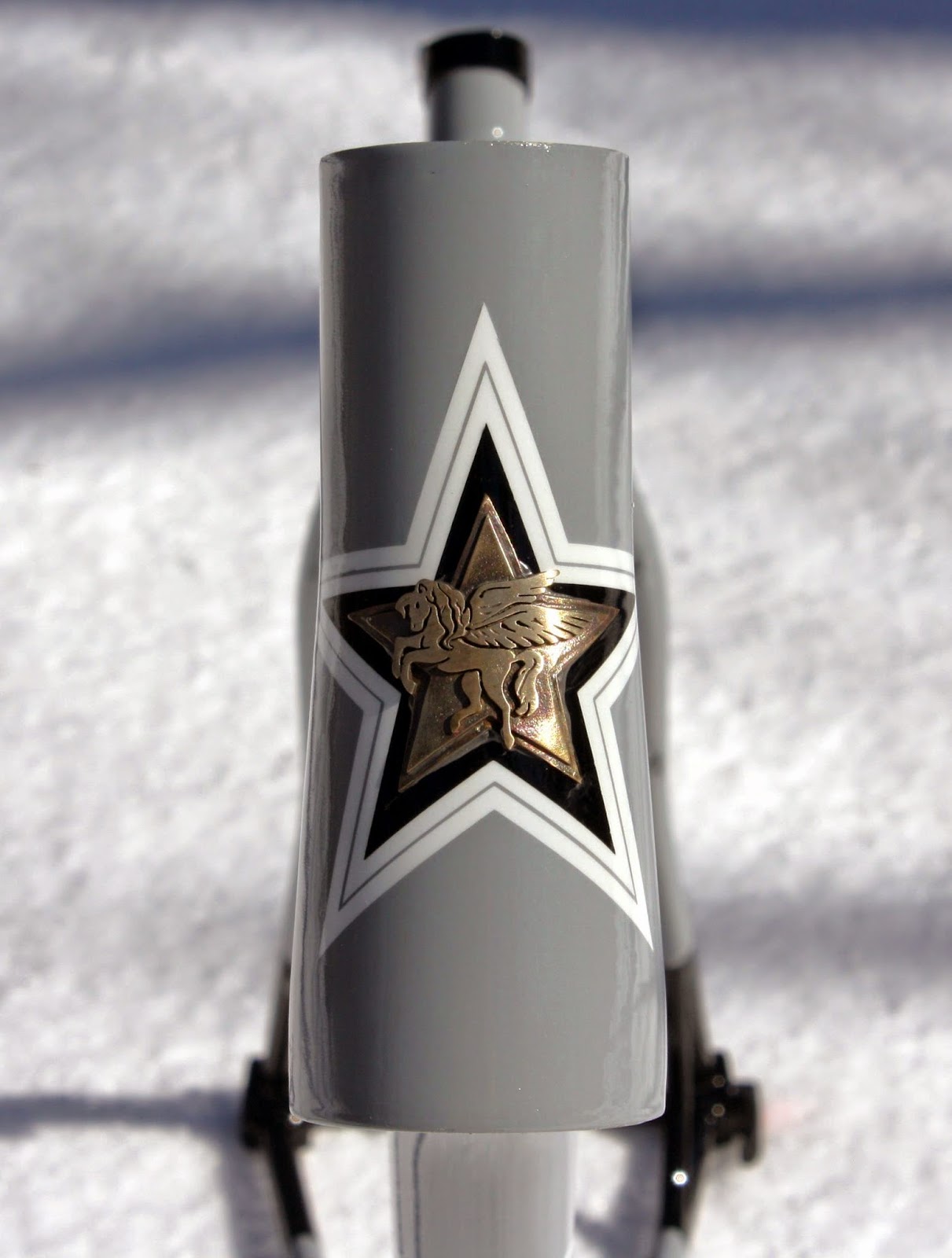 I don't think I could do this again if I tried. Maybe I'm selling myself short. 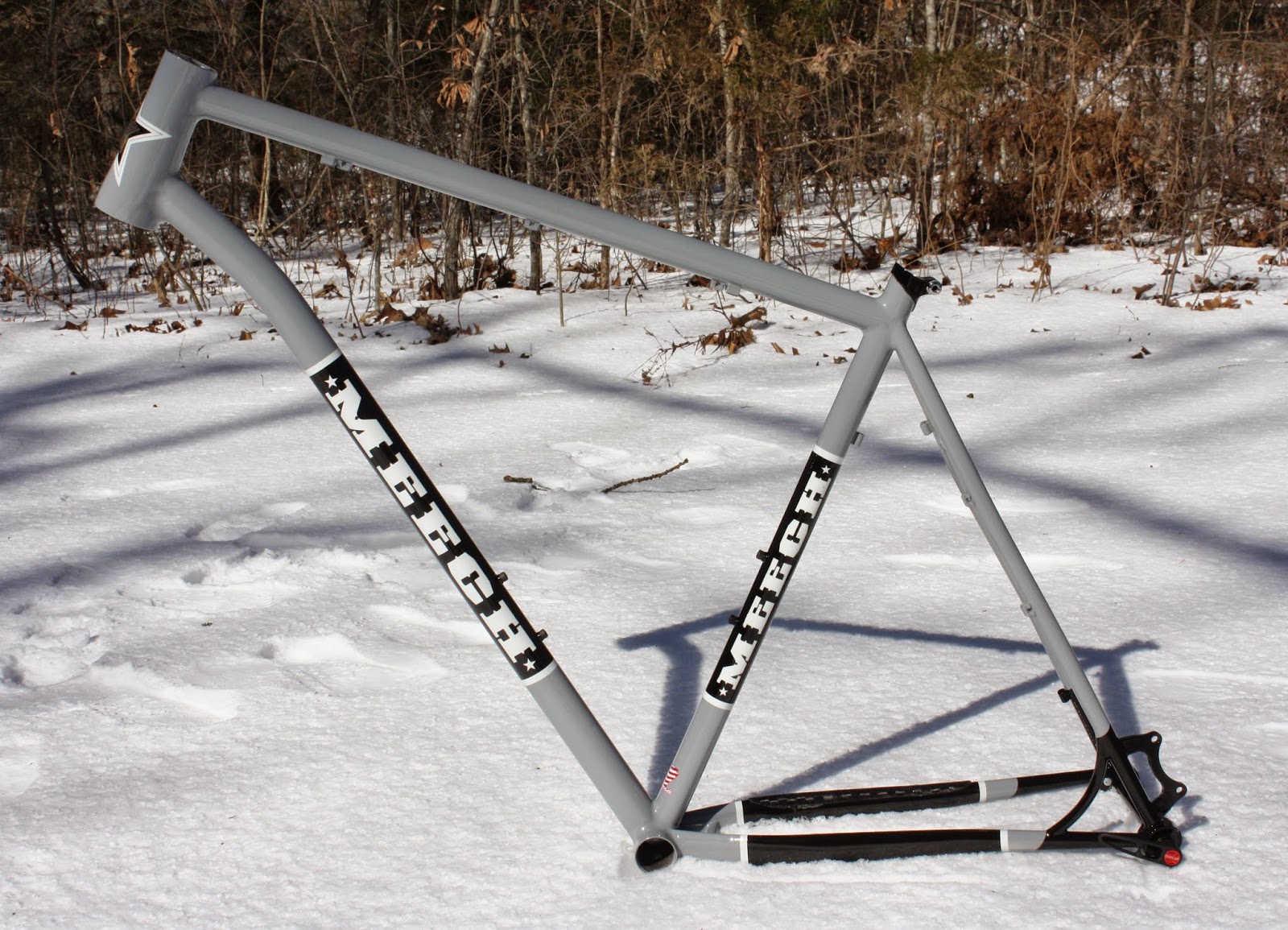 I can't wait to see this thing built up.  Christian told me that the cross bike is the best bike he's ever ridden, and, he let a friend go ride it as well, and when they got back apparently they said the same thing.  That means alot coming from someone who has wrenched on bicycles 20+ years.  I'm hoping this frame doesn't dissappoint.  Thanks Christian for letting me build these frames for you.  Stay in touch. 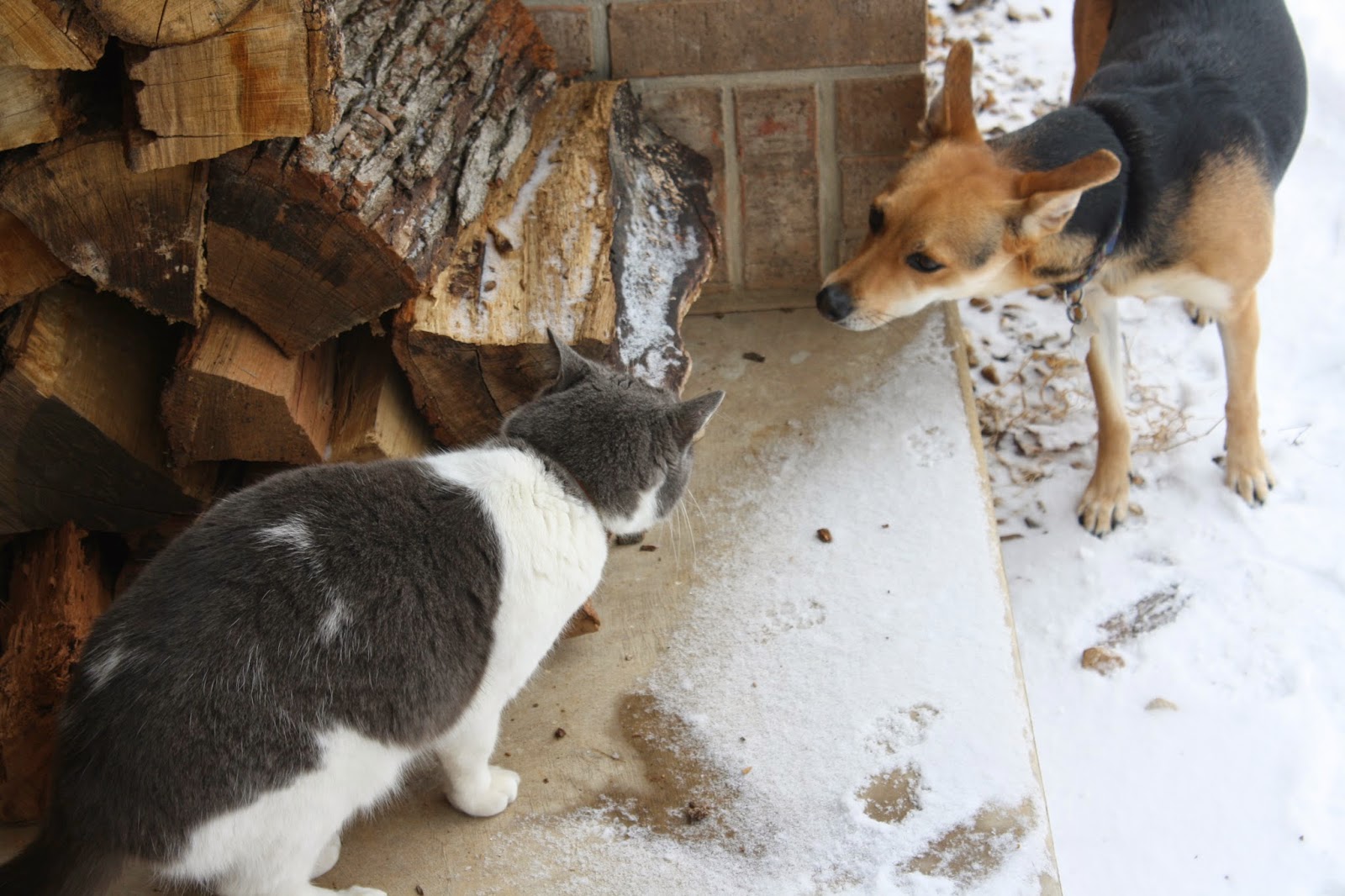 Actually Louie and Dizzy are great friends.  Louie is a lover not a fighter.  Dizzy however harrasses Louie to no end. Dizzy has some kind of herding DNA in him as well as turning a deaf ear and running away DNA. 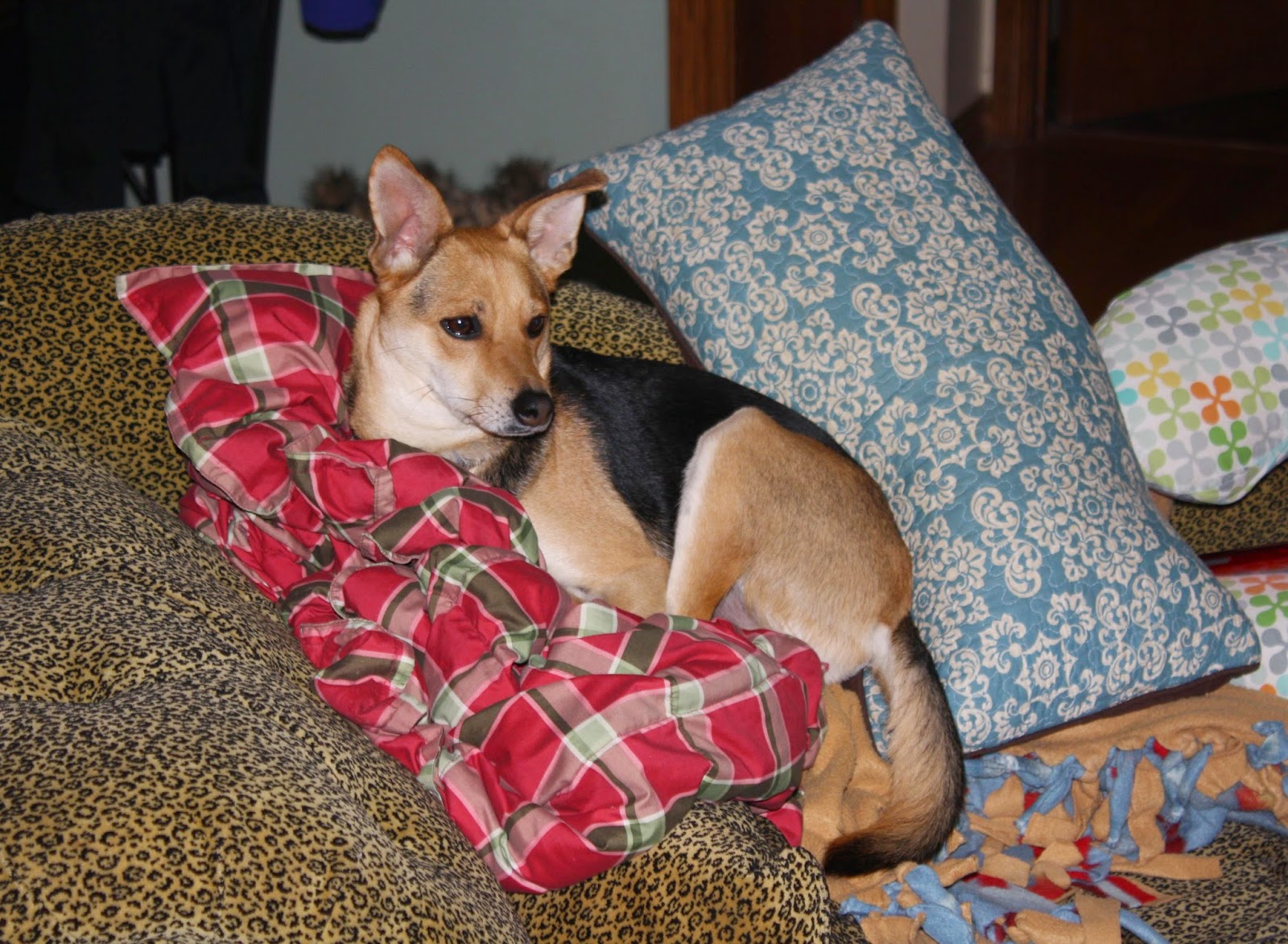 He and I aren't exactly Siberian dogs. How many pillows do you need Dizzy? 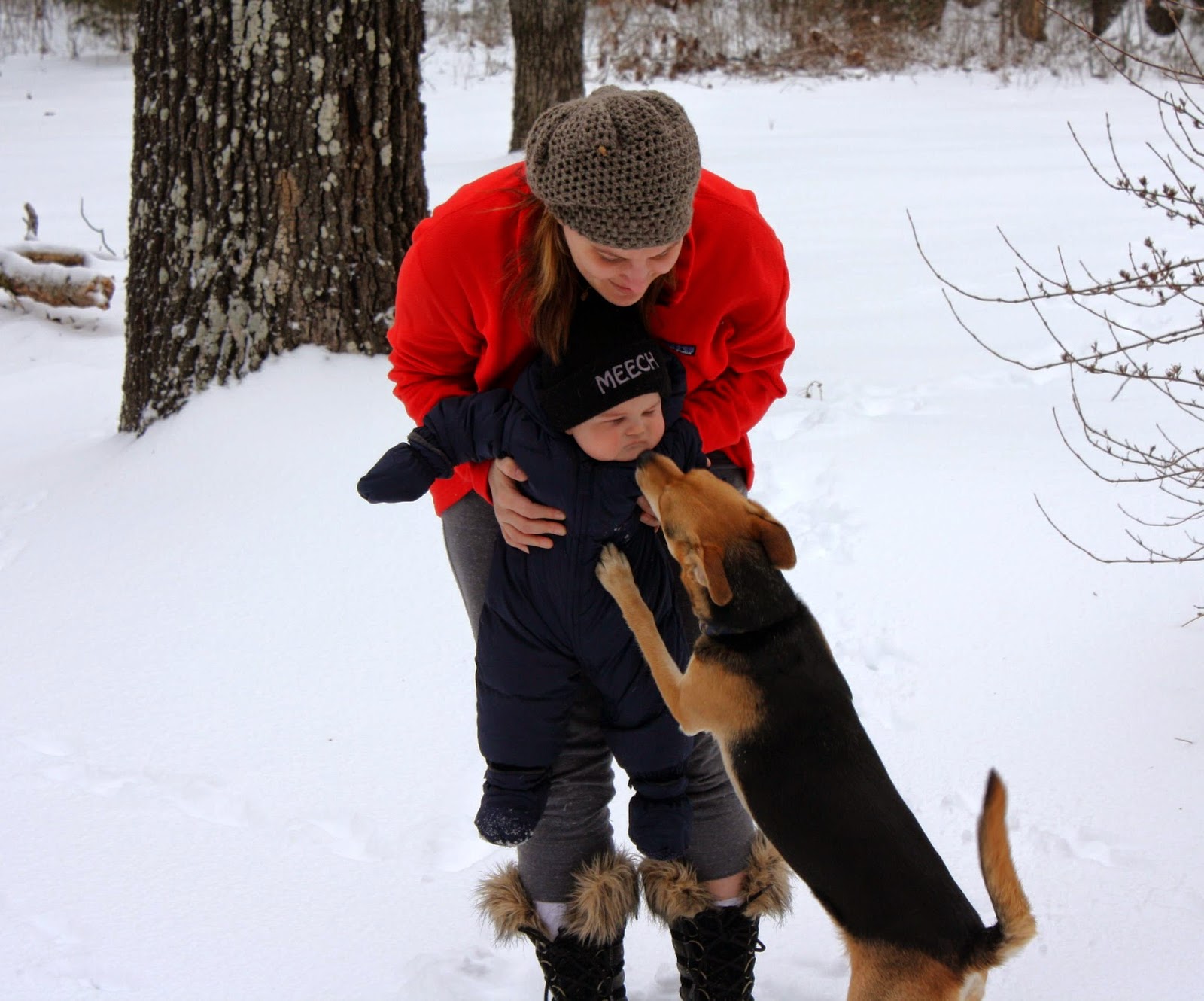 Here is Anne, Jack, and Dizzy on a snow day.  They're all crazy but I love 'em anyway.