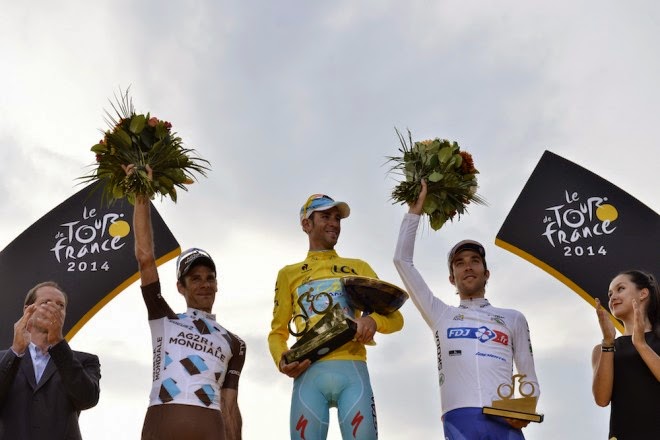 Italy's Vincenzo Nibali easily won this year's edition of the Tour de France. Honestly I don't think it was quite as easy as he made it look. After all, when's the last time you got finished with a race and said, "Man, that was easy."  He ruled this year's Tour with an iron fist from the second day on and grabbed 18 yellow jerseys out of 21 stages.  I can't recall that ever happening, however I'm no Tour historian.

Do yourself a favor and forget all those people out there crying foul, saying Froome and Contador weren't there, or that he was doped to the gills, none of that matters now.  He started training for the Tour last year and it was his sole focus all year long.  Everyone criticized him all season long about how he wasn't winning anything but he stuck to his plan and prevailed.  Yes it would've been a much better race had Contador and Froome been there but I'm not so sure that Nibali wouldn't have still won.  It almost looked as if it was written beforehand that 2014 would be his year.  I don't recall anyone ever looking more focused throughout the entire race than Vincenzo did this year.  He kept a completely straight face throughout every mile of the race and only showed emotion when he stood on the podium.  He looked confident and defiant throughout the race's entirety and I feel like he did it clean.  And yes, I've said that before, and yes,my fingers are crossed.  Also should mention that two frenchmen, Jean Christophe Peraud and Thibaut Pinot, took the second and third steps on the podium.  I'm sure France is happy to finally see some of their homeboys get some attention.

Alejandro Valverde cracked a little as I was afraid of and lost his chance to stand on the Tour podium.  When I look at Valverde, by all accounts I would think that he would be able to knock down a good time trial once in a while, however he couldn't ride a time trial to save his good mother's neck from the gallow's pole.  I read that he had been working on his time trialing and I hoped that it would pay off, but unfortunately no dice.  Let it go, 4th place on the Tour is not bad. After such a long bike racing career filled with many ups and downs, I can imagine that standing on the Tour podium would be any racer's dream, but it wasn't meant to be.  He took it like a man though and basically said, "I gave it all I had and my body just didn't respond."  Sounds human to me. We've all had that happen.  It happened to me just yesterday on my 25 mile ride around the Mountain Home area, and the day before that, and I believe the day before that.  Some days I feel like my body is completely shot.  Actually the only time my body really feels good is when I'm sleeping.  Jean Christophe Peraud is 73 years old, I mean 37 years old.  Can you imagine a 73 year old man riding the Tour?  Just wait 30 more years and you'll probably see Chris Horner doing it. 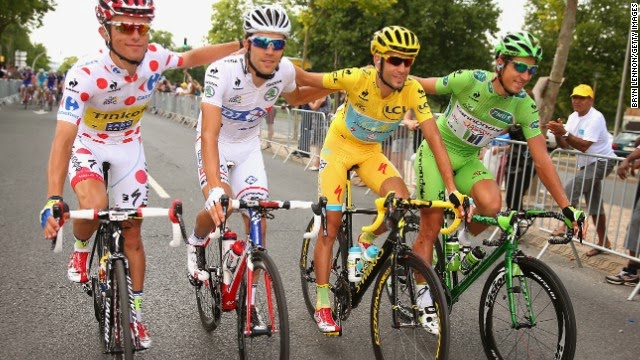 Rafal Majka, Thibaut Pinot (i believe), Vincenzo Nibali, and Peter Sagan.  Oh how good that must feel. I think that polka-dot jersey would look good on me.  White isn't fitting for the most aggressive young rider.  Perhaps a red jersey with a couple of yellow racing stripes down the back.  Green, pffff, who cares.  Just kidding.  I love the Saxo-Tinkoff racing outfits but I thought you weren't allowed to wear yellow in the Tour.

Their jerseys are more yellow than the actual yellow jersey.  I guess the blue supposedly keeps them out of trouble. Go check out their website.  There is a video of Alberto laying in bed with a cast on his leg.
http://www.tinkoffsaxo.com/media/ 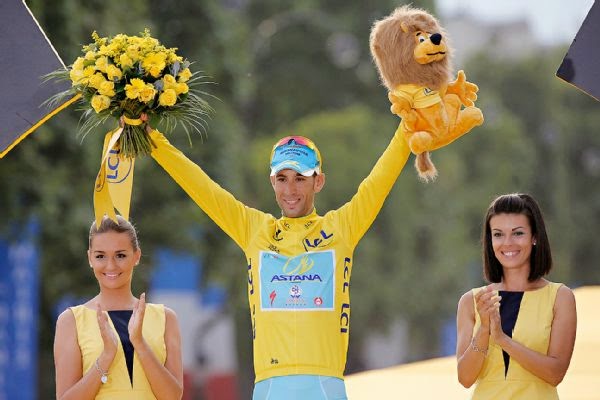 I thought this year's race was an excellent race even though 2 of the main protagonists crashed out.  There was some good, solid, exciting racing almost everyday and not too many stages that appeared boring to me.  I love seeing all the scenery and listening to Phil and Paul bounce comments off of each other.

One of my favorites from this year was when Lauren Ten Dam was finishing up his time trial and Paul Sherwin said something like, "Here is Lauren Ten Dam pushing hard to stop the clock...", and then Phil follows up with, "Yes Paul, and he's not gonna be very happy when it finally does."

My only complaint with this year's Tour is the podium girls shown here beside Nibali.  Geez Bernard!  I mean...in all the streets of France you can't find anything prettier than these two homely chicas. I could throw a stone into a crowd and hit two chicks that were better looking, one might've been missing a tooth from the rock but if she kept her mouth shut nobody would know the difference.  "Here honey, just stand right here and keep your lips pressed firmly together and later we'll go out for some soup."  Next year maybe you should borrow a couple of muchachas from your neighbor.  They must be his daughters. 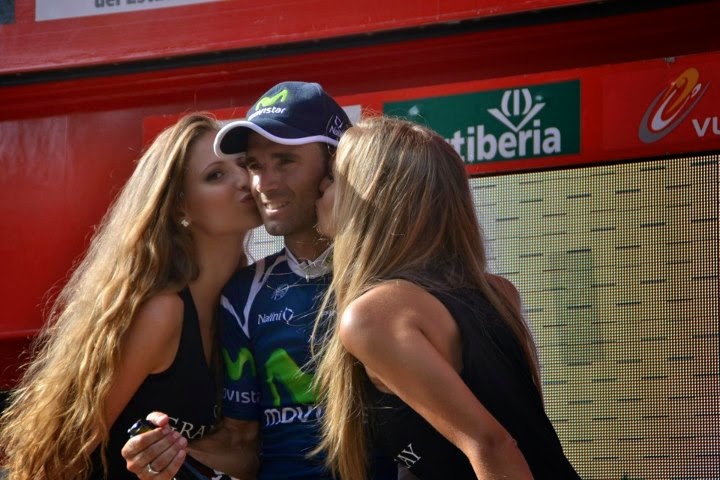 Look what Spain did for Valverde and he didn't even win the race. 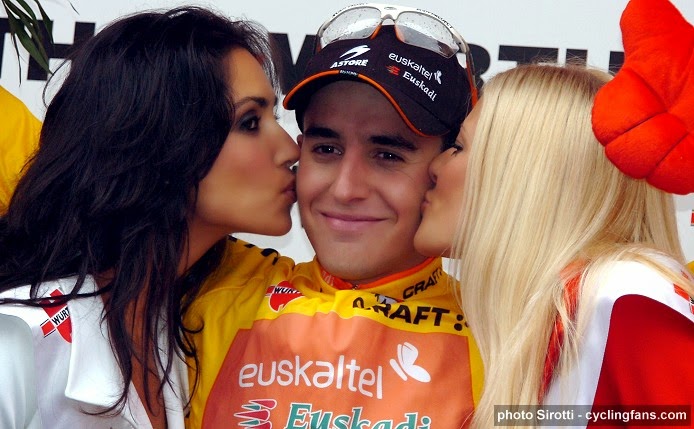 La Vuelta is where its at.  Oooh la la!
Adios amigos.

Note:  Thanks to Velonews.com and various papers and websites for the photos shown here.