This One is Mine All Mine 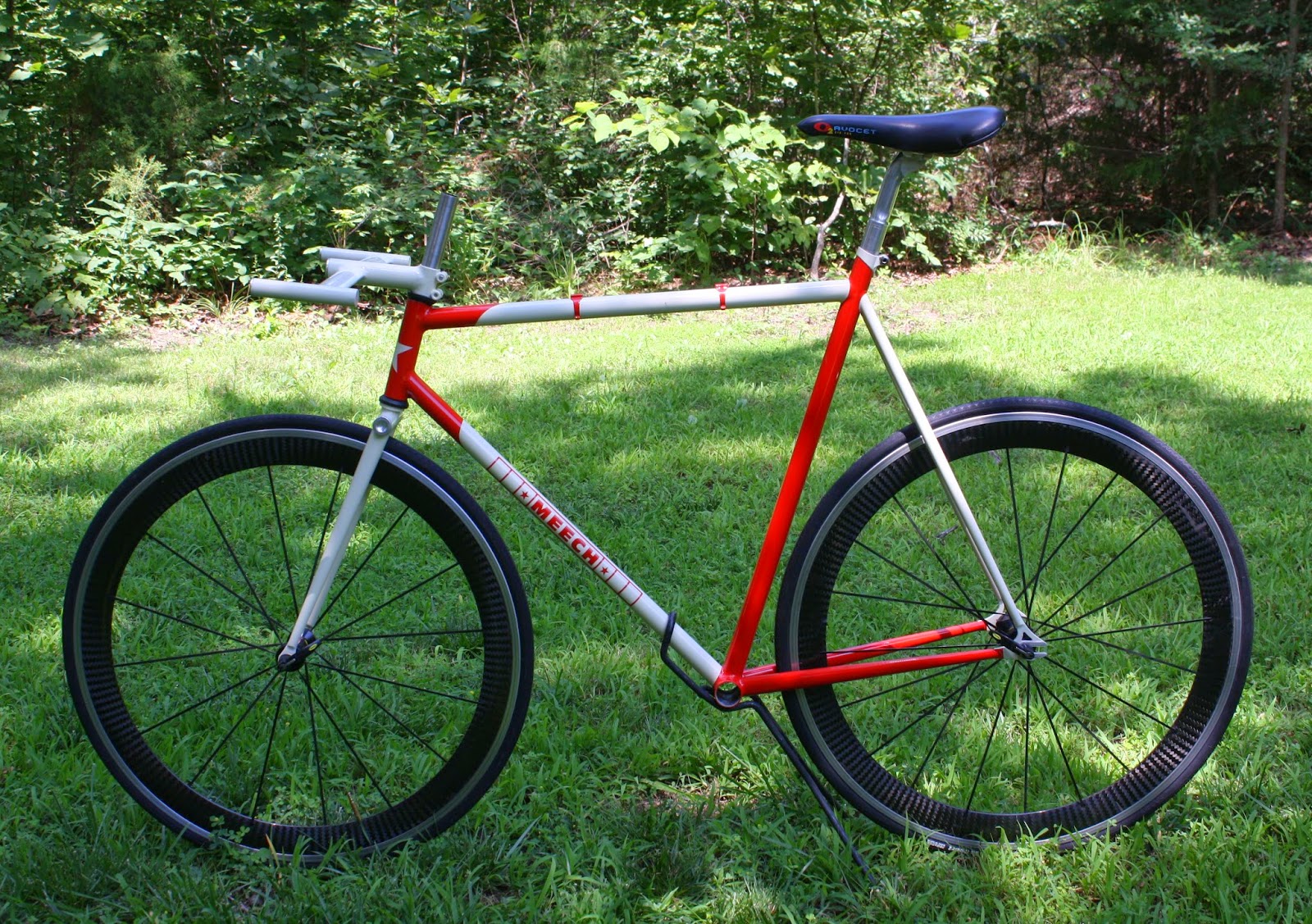 Were you beginning to think I wasn't coming back?  I know, I'm always thinking about you guys but I just didn't have anything to show you until now.  I finally got caught up a few days back and have been playing around with some of my own ideas, and trying to finish up some of the older ones.  This frame has been laying around forever and so I finally decided to put some paint on it.  The colors are Creme Brulee and Torn Hemorrhoid red.  Ok, I may have just made up one of those so I'll let you figure out which one.  First person who knows will get a free MEECH cap.  I tried to throw a couple of pieces on it to make it look like an actual bicycle, as I know you guys get tired of just seeing frames.  I wish I had the time and money to build everyone of 'em up and take 'em for a spin.  If only.

This frame was an old project and wasn't built for anyone in particular.  It started out gonna be one of those downward sloping top tube track/time trial frames but I didn't get as much slope in there as I wanted.  I had planned on just putting some drop style bars on it (I still can if I want), but then I decided to try my luck at making some aero bars and they turned out alright, a bit heavy as they're steel, but overall not bad at all.  I'm gonna definitely need to put some grip tape on the bar ends because they're just way too slick.  Lets go check it all out. 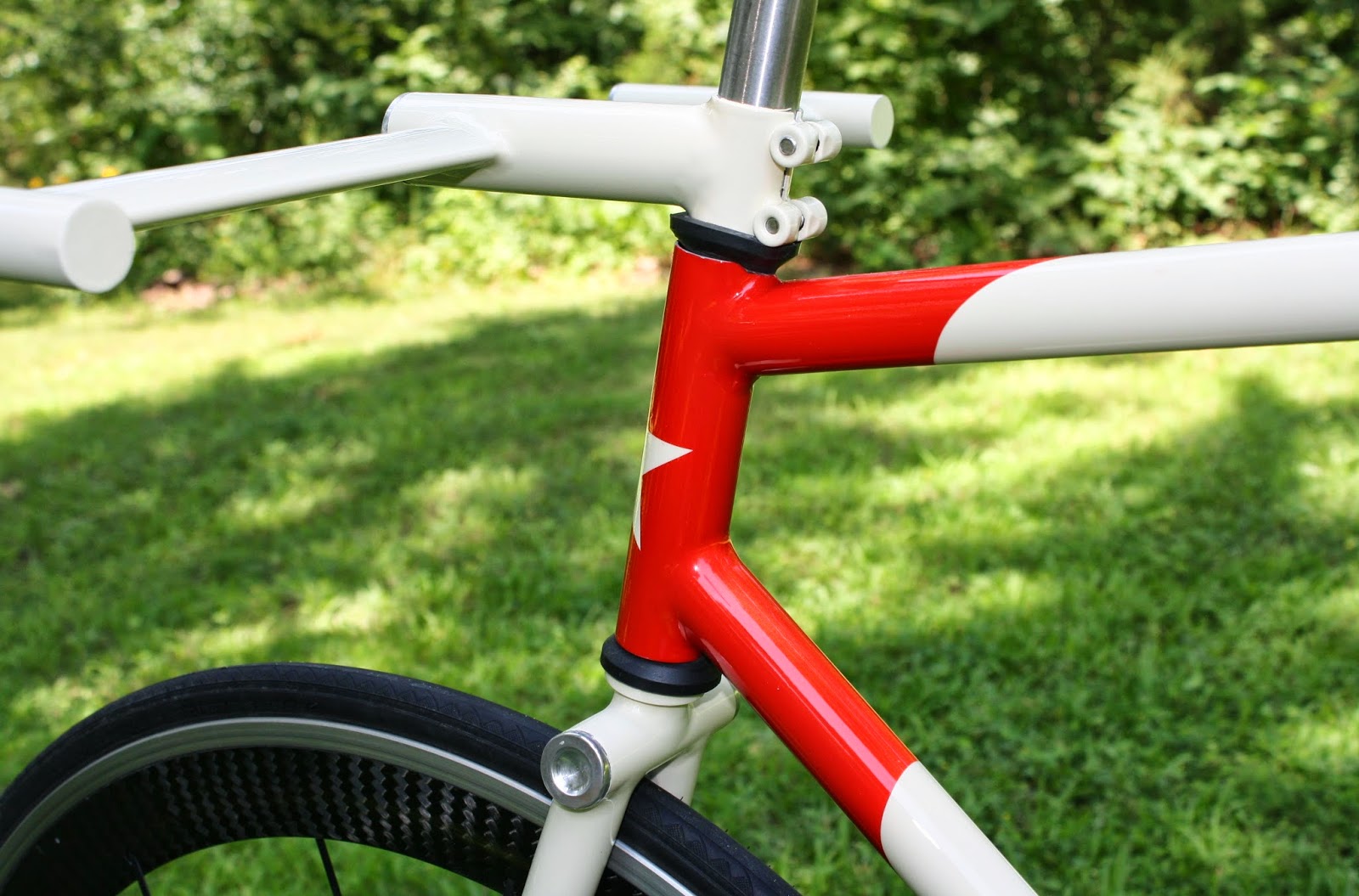 The fork was made from scratch by me and all the end caps on the fork and bars were made by my good friend Bob Davis.  I told you all that I got a small milling machine this past winter and its basically nothing more than a glorified drill press with me at the helm.  I know nothing about machining parts and I don't have a clue as to how Bob does what he does but he's good at it.  He's 85 years old and been a machinist all his life.  People contact him from all over the world to make custom parts for their BMW motorcycles.  He's got a palmares nine miles long.  Did I mention he plays the bagpipes? 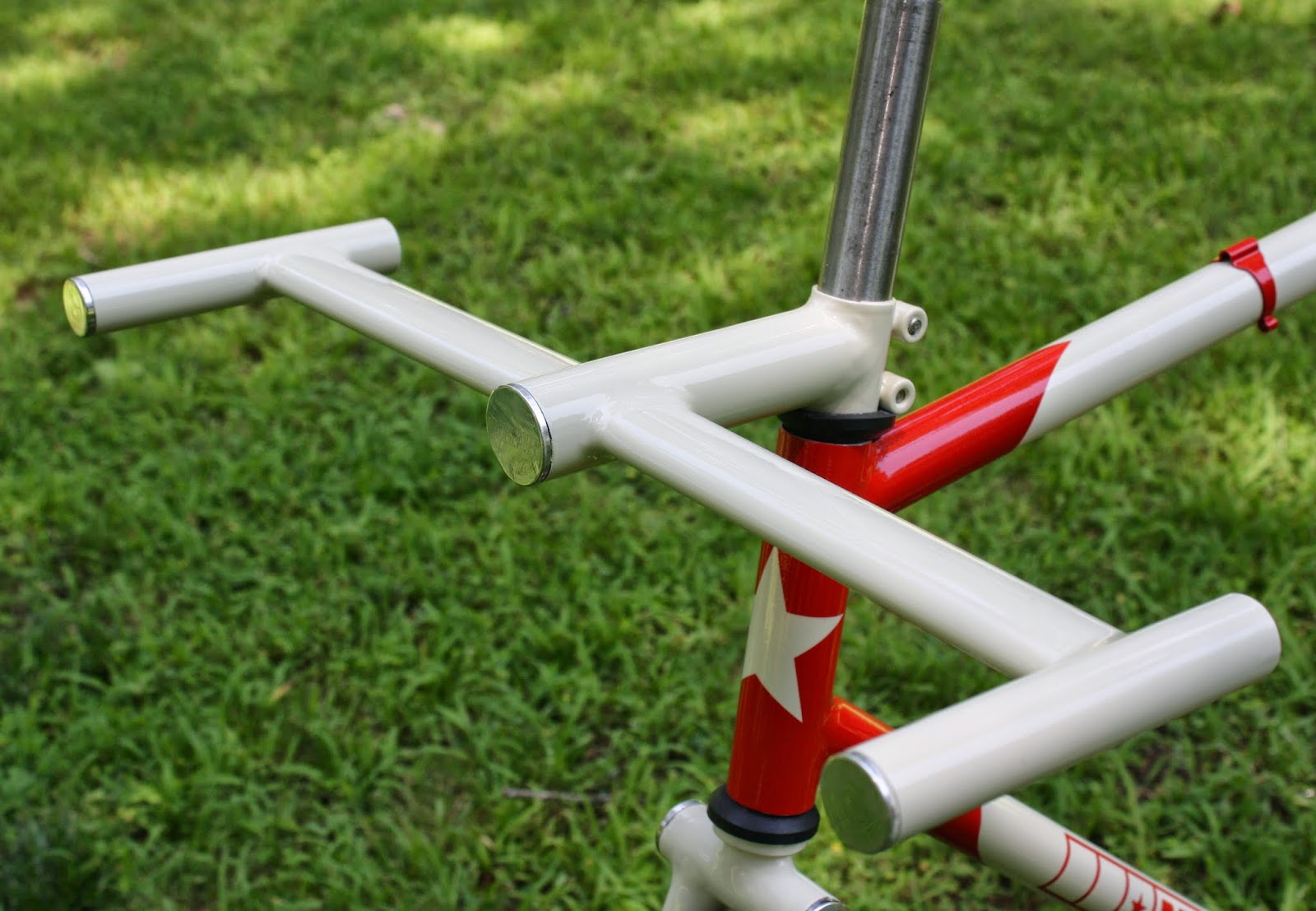 These are aeroplane bars. 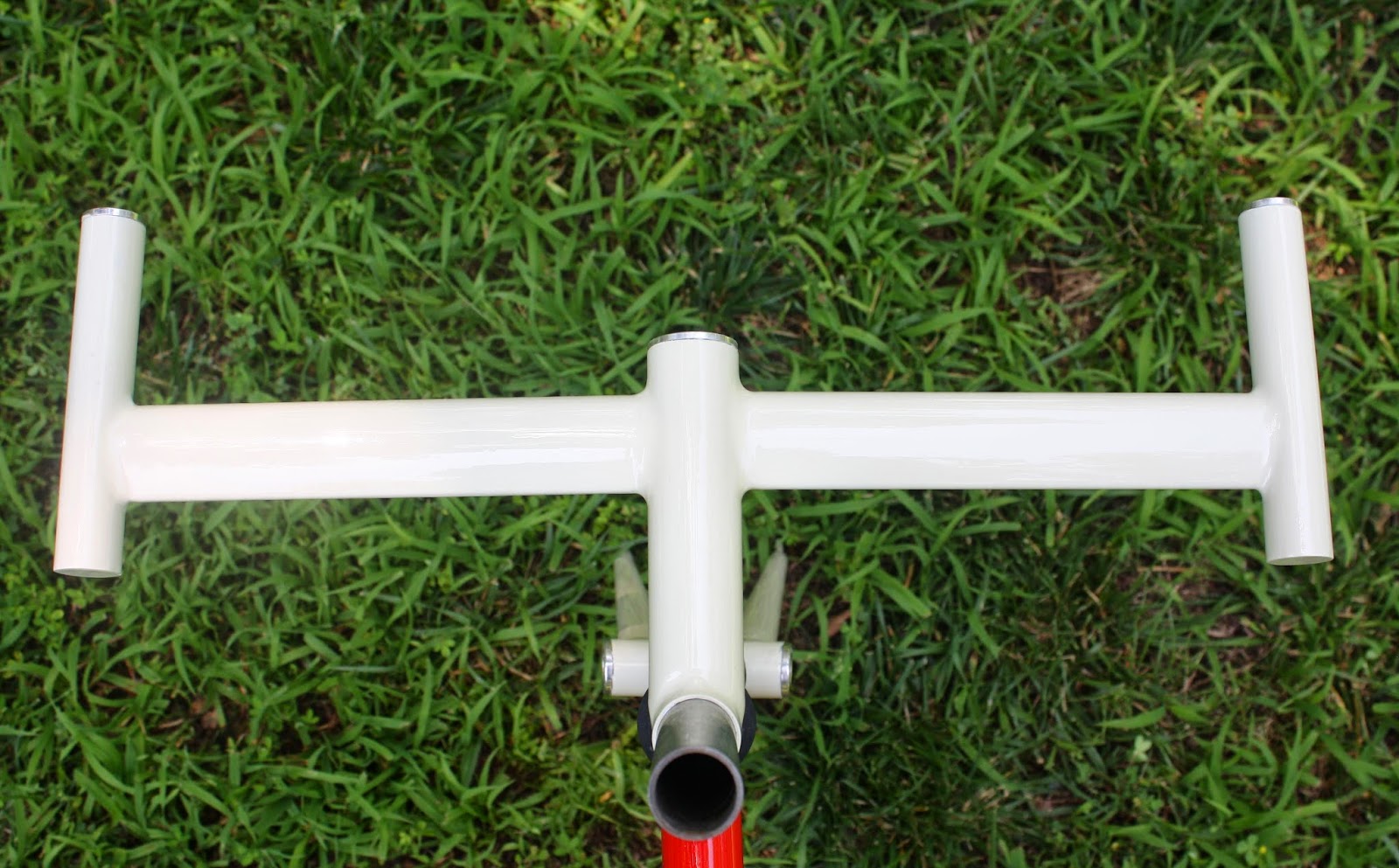 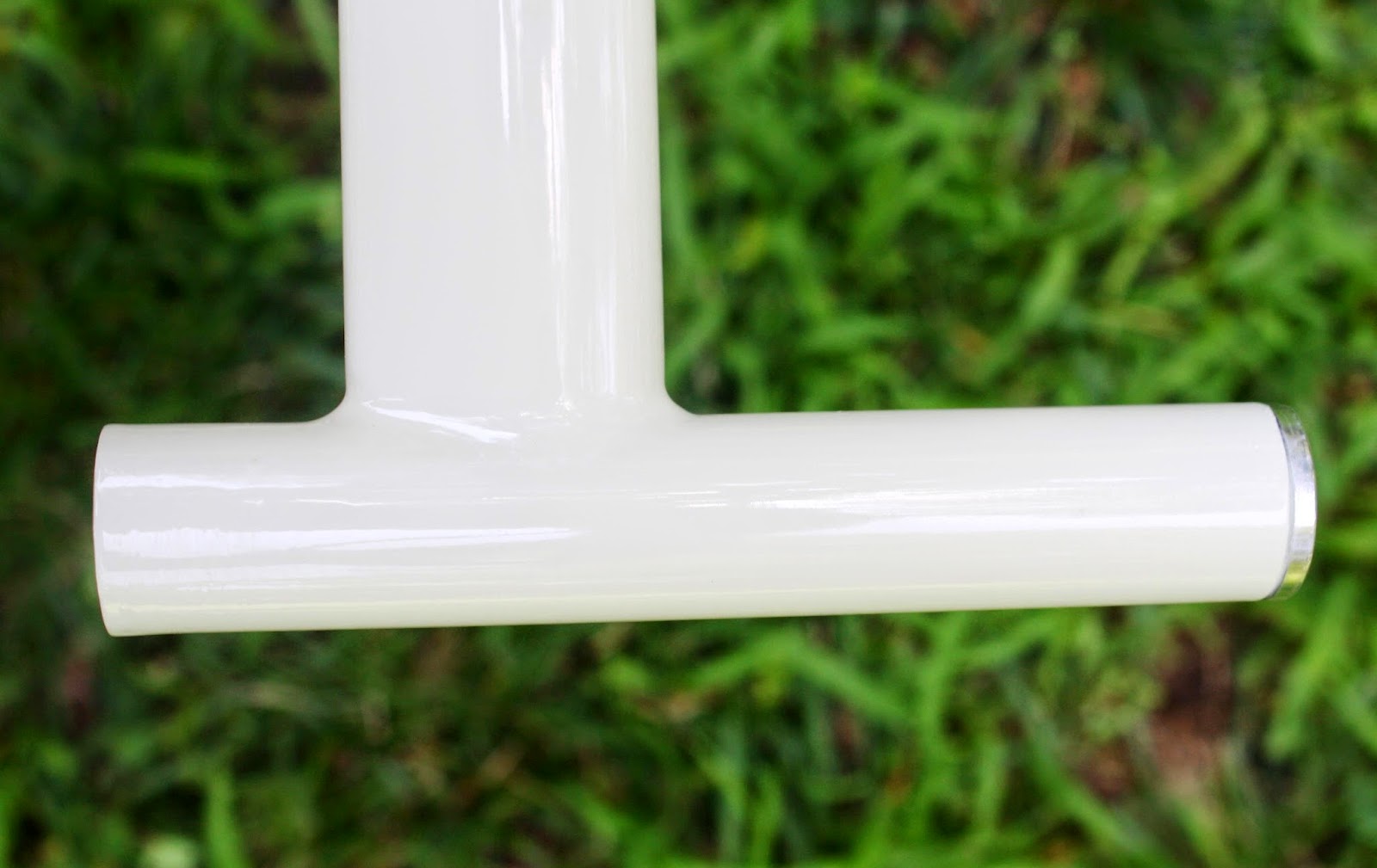 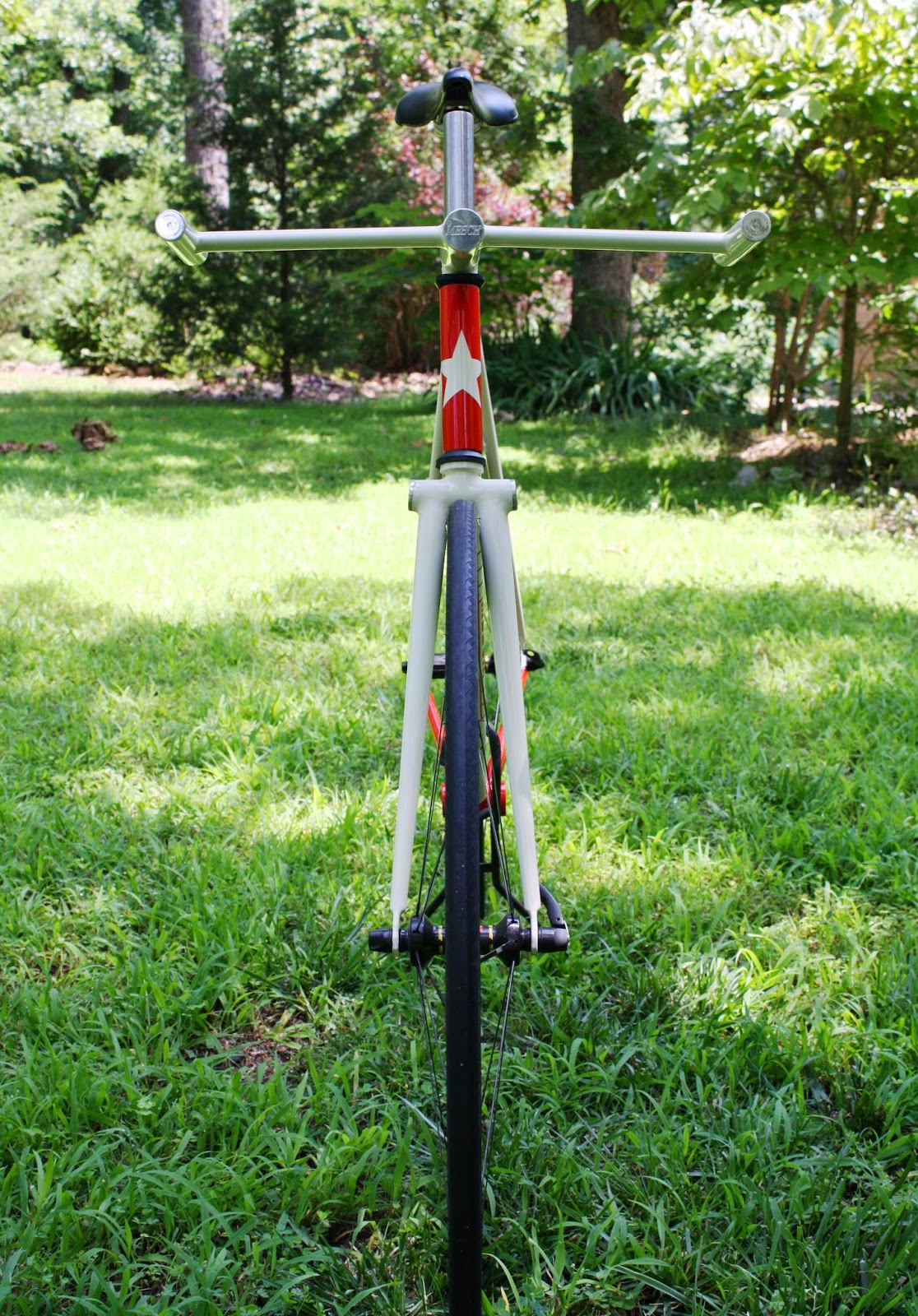 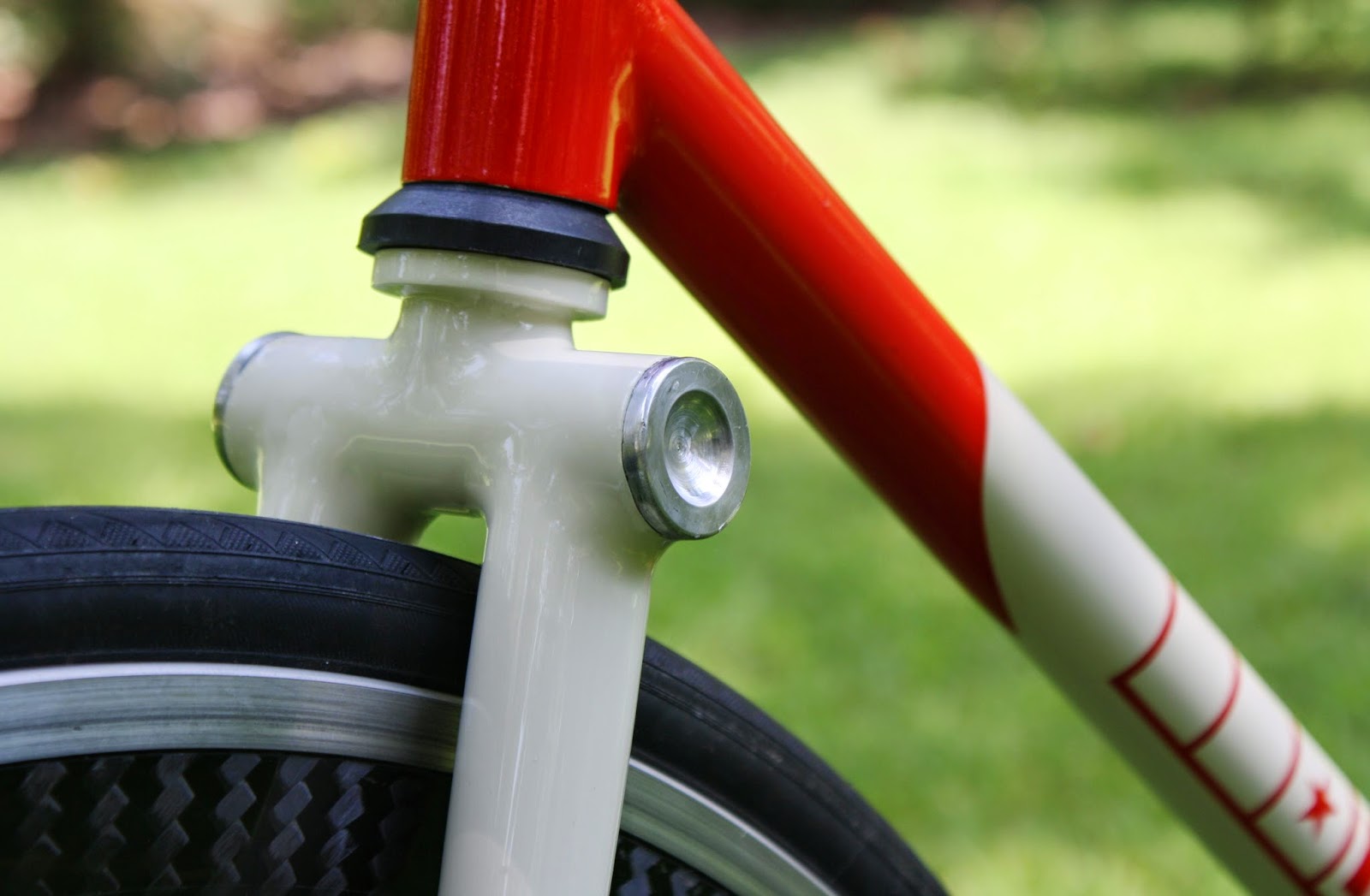 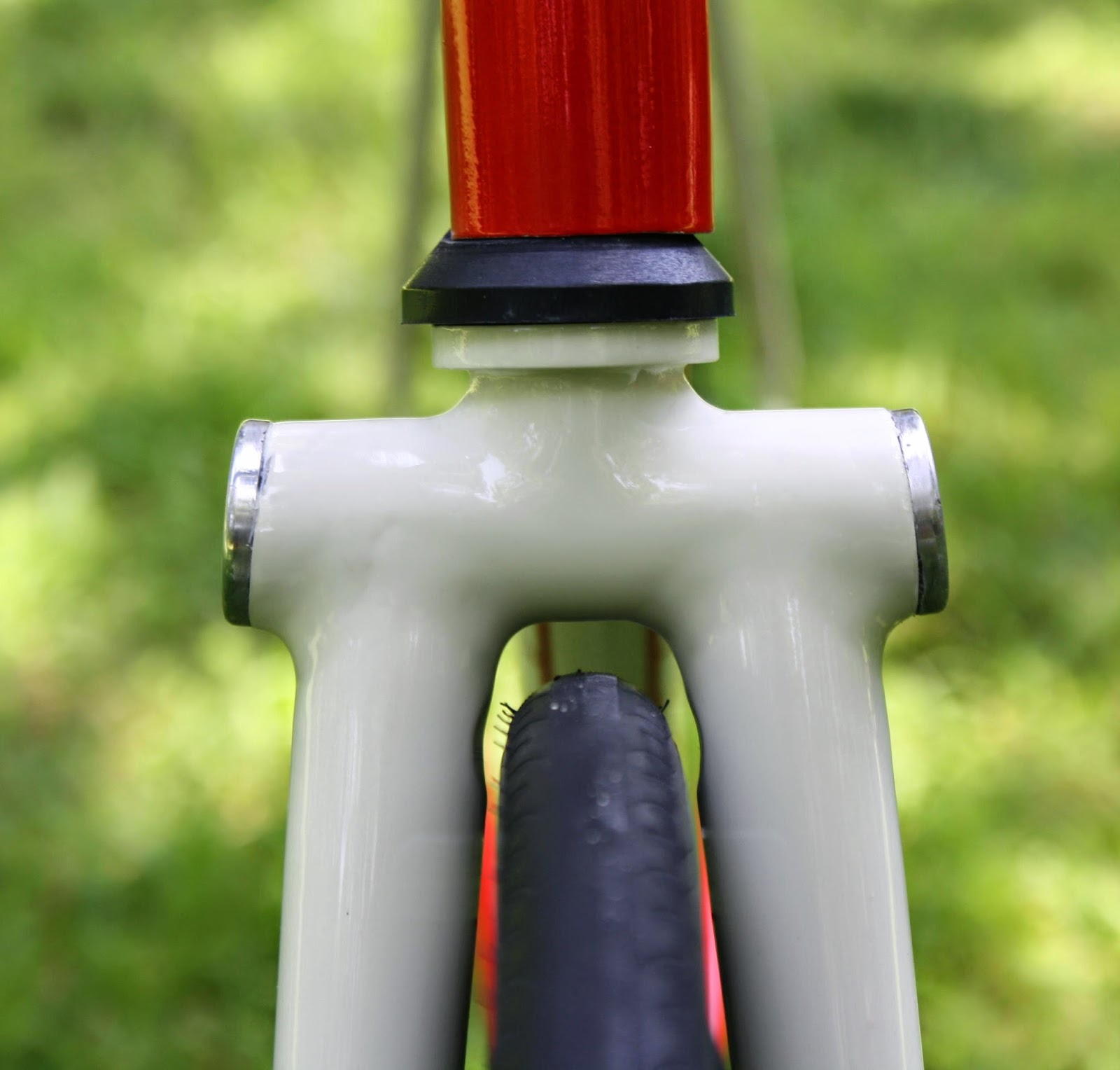 How's this for custom tire clearance? 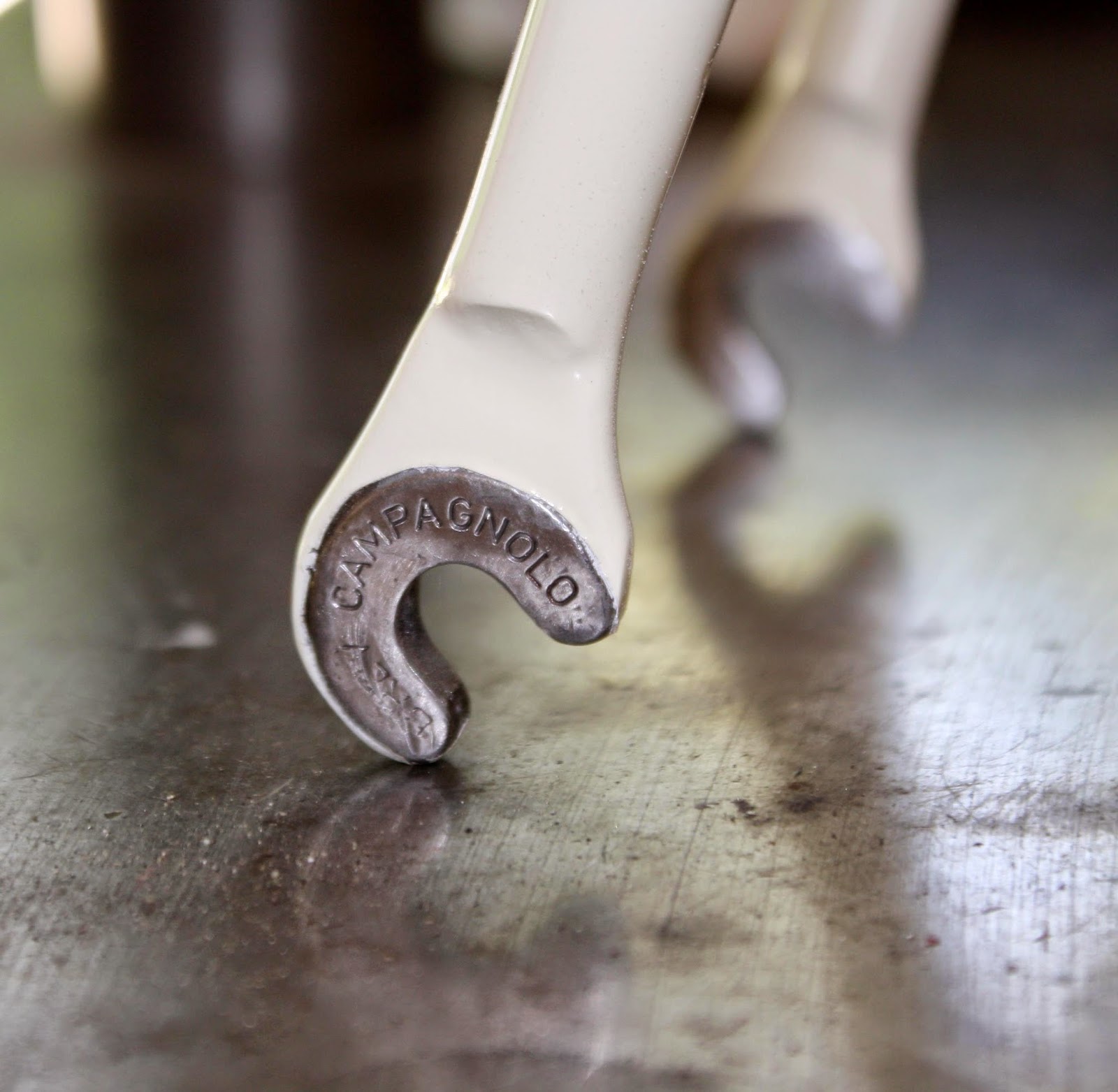 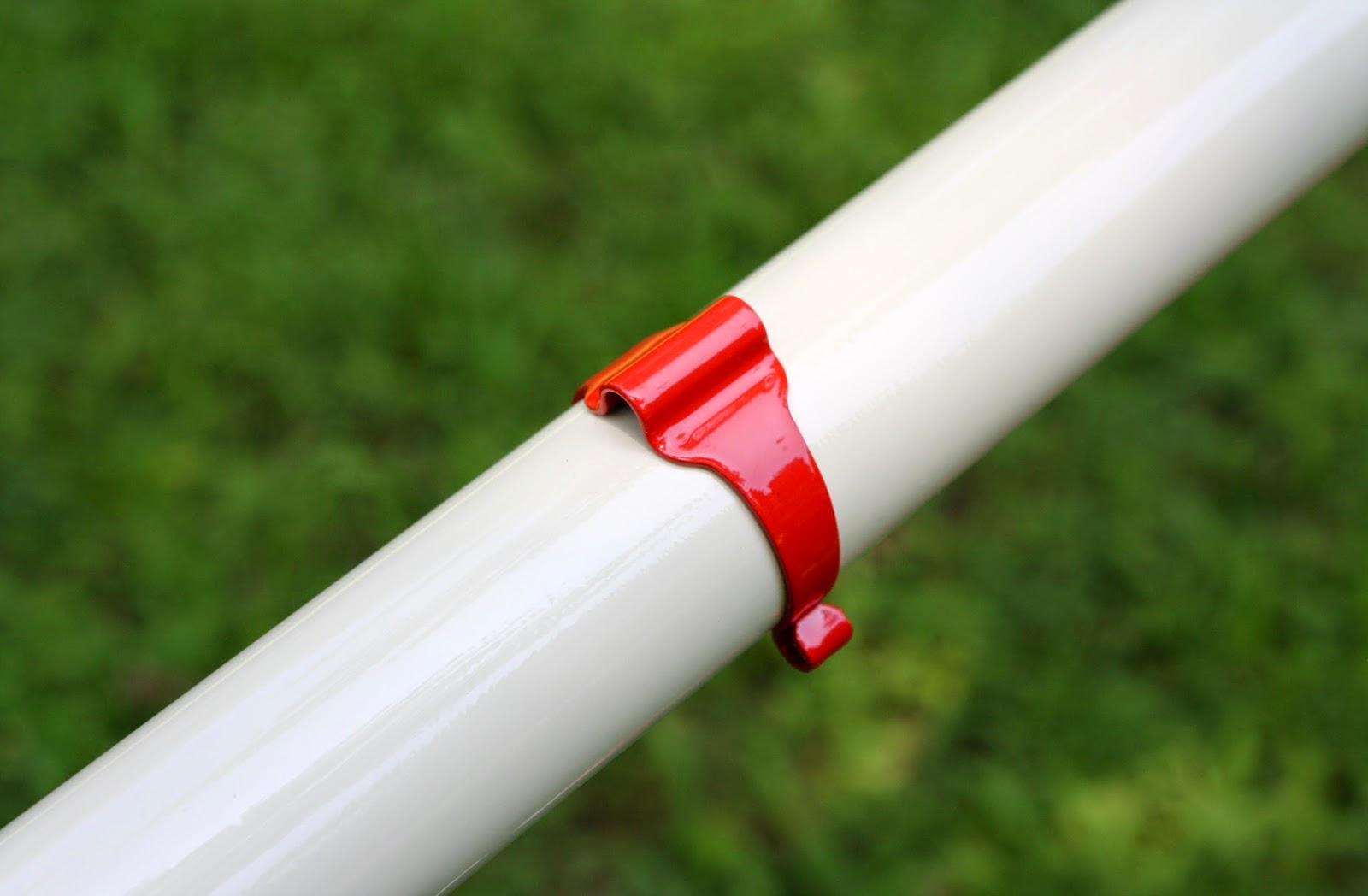 These little snap-on cable guides caused me a lot of pain this morning.  After debating back and forth about whether or not to put braze-ons on this frame (in case someone wanted a rear brake), I decided on these clip-on cable guides here.  I knew there was a chance that they would scratch the paint as they are very tight and don't snap on easily, but after playing around with them on a painted tube I thought it would be okay, however I scratched the top tube with the first try.  Oh well, it hurt for a minute but if you're like me you don't worry about scratches on your bike because I'm no pretty boy.  I'm just glad it wasn't for a customer or it would've really stung.  This bike has no braze-ons for nothing, not even a water bottle. 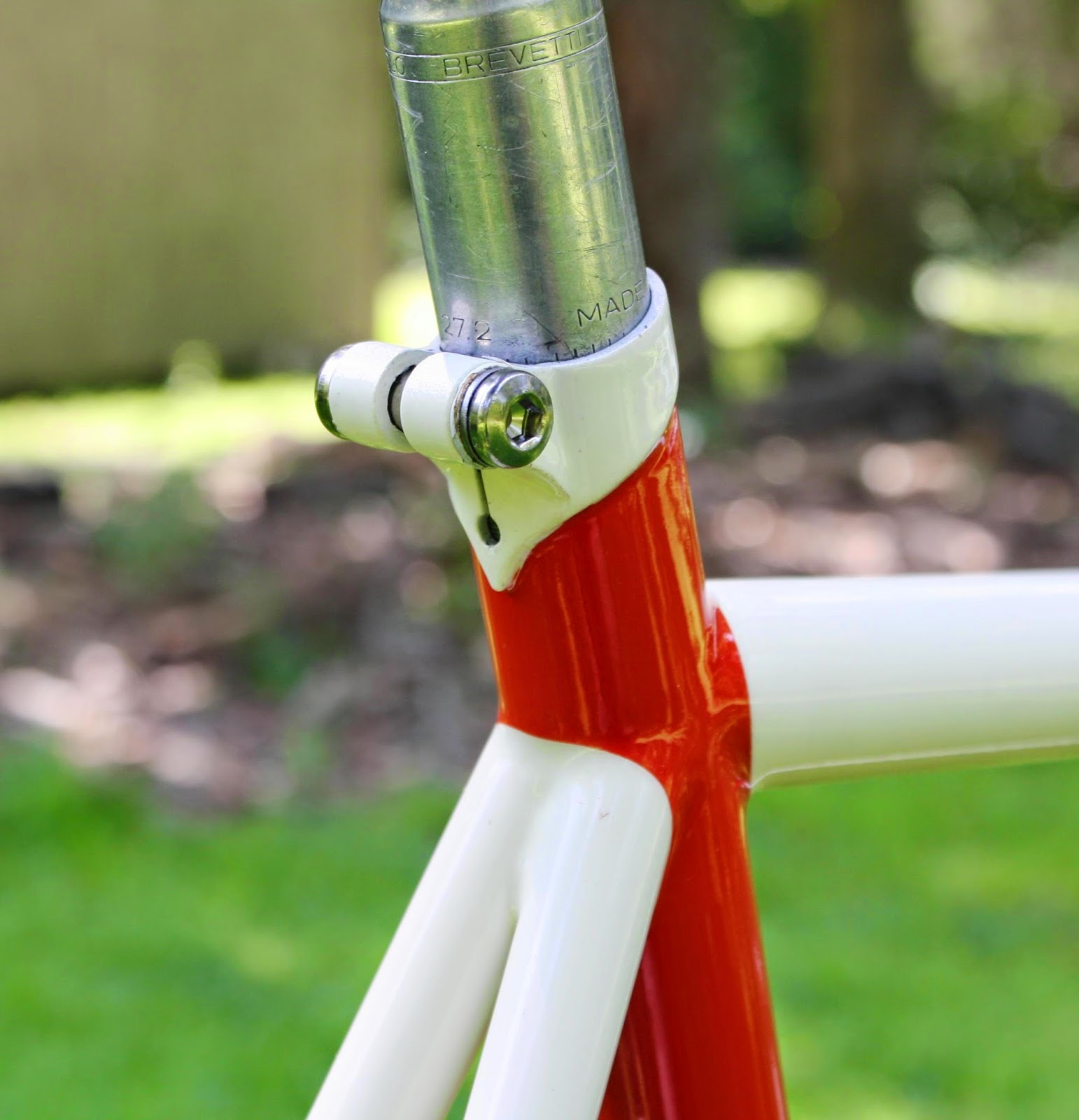 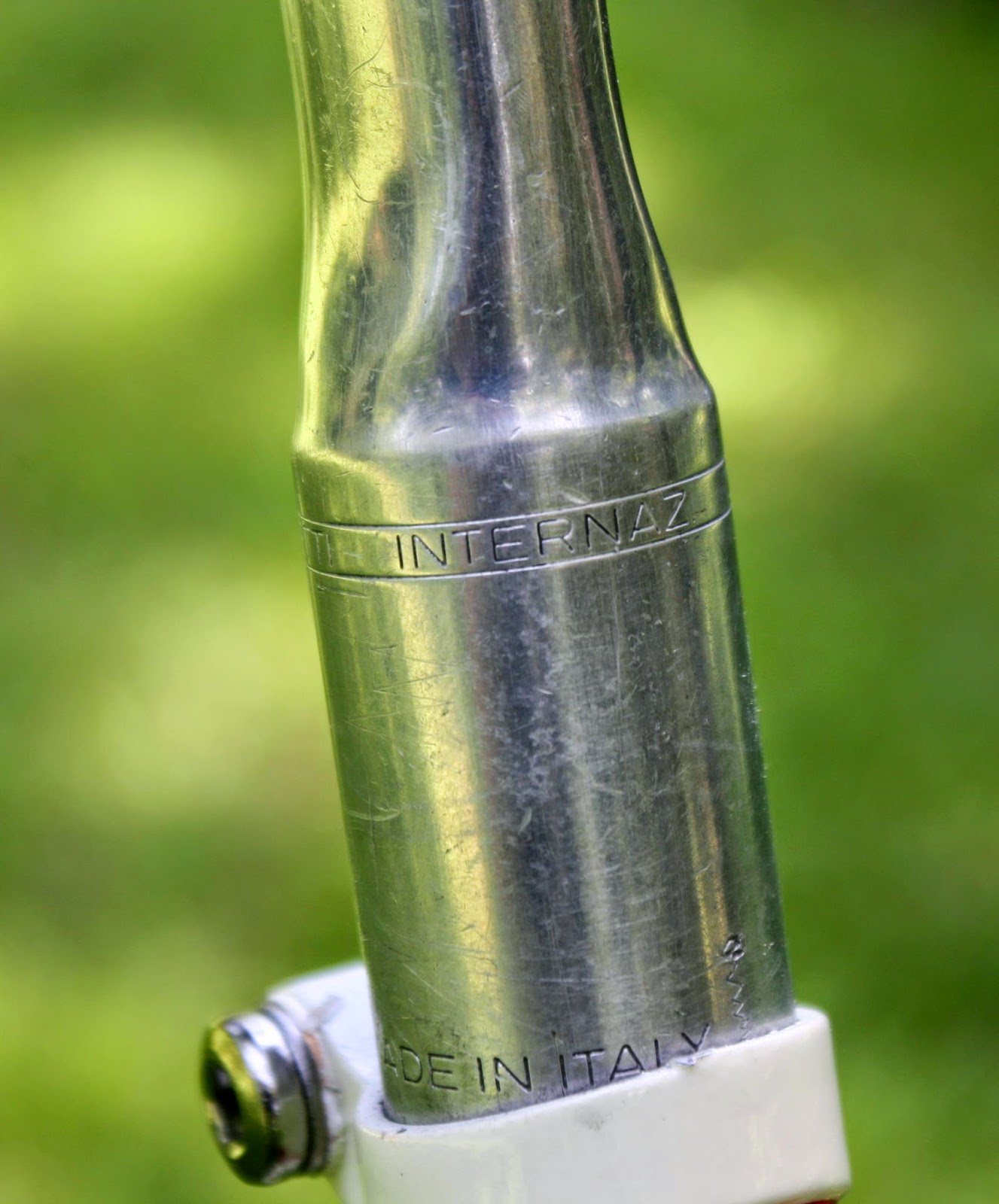 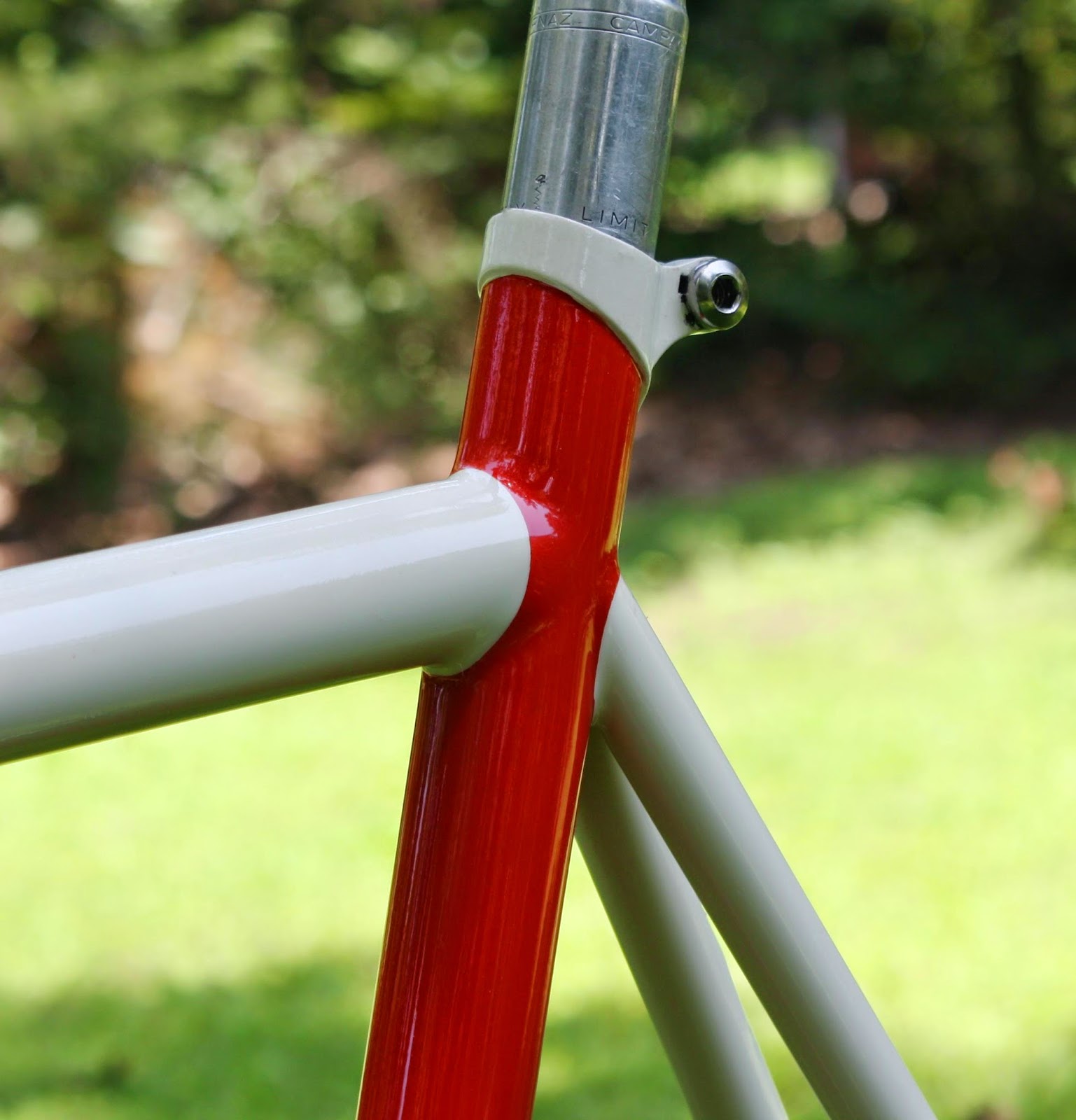 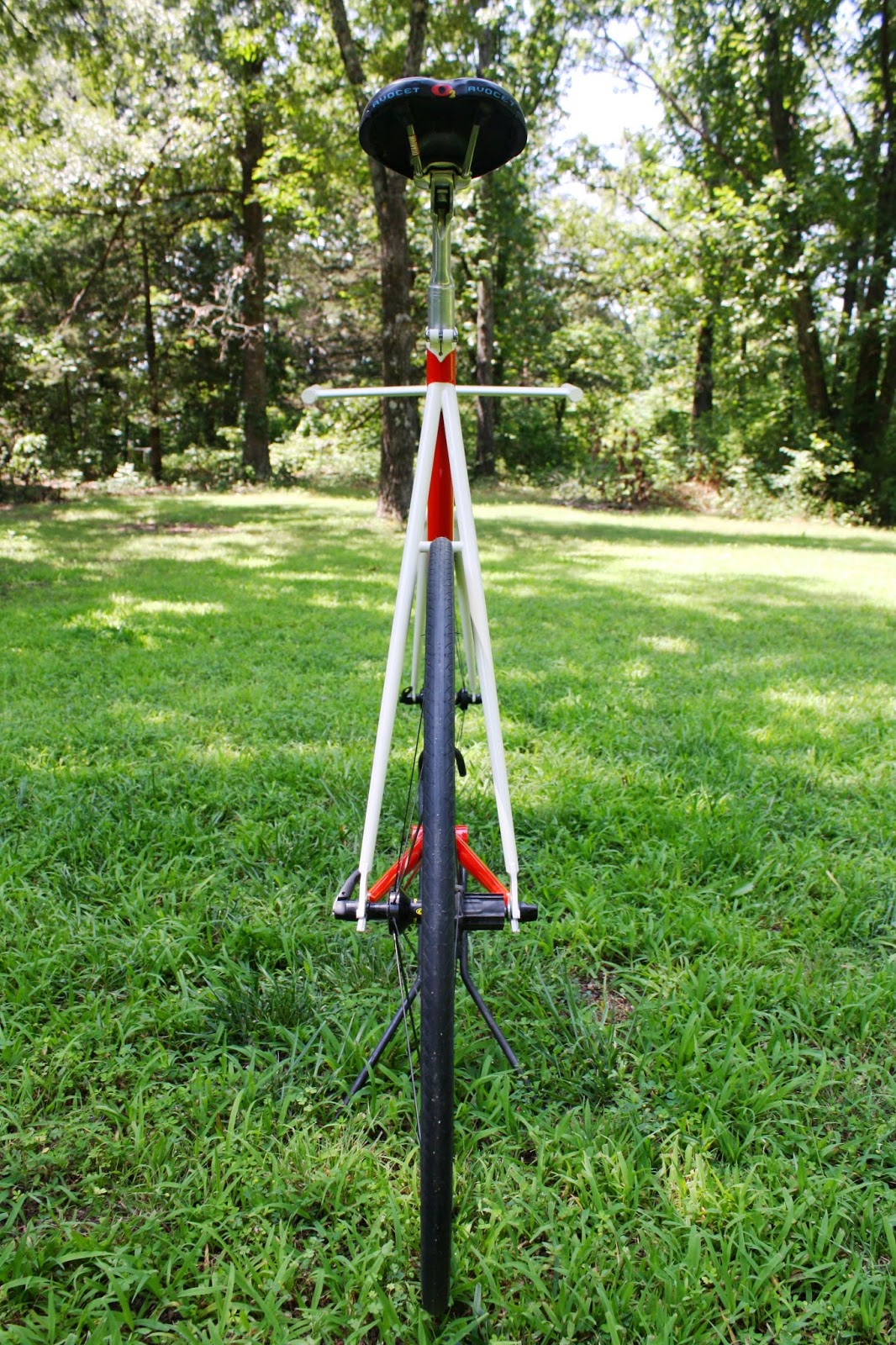 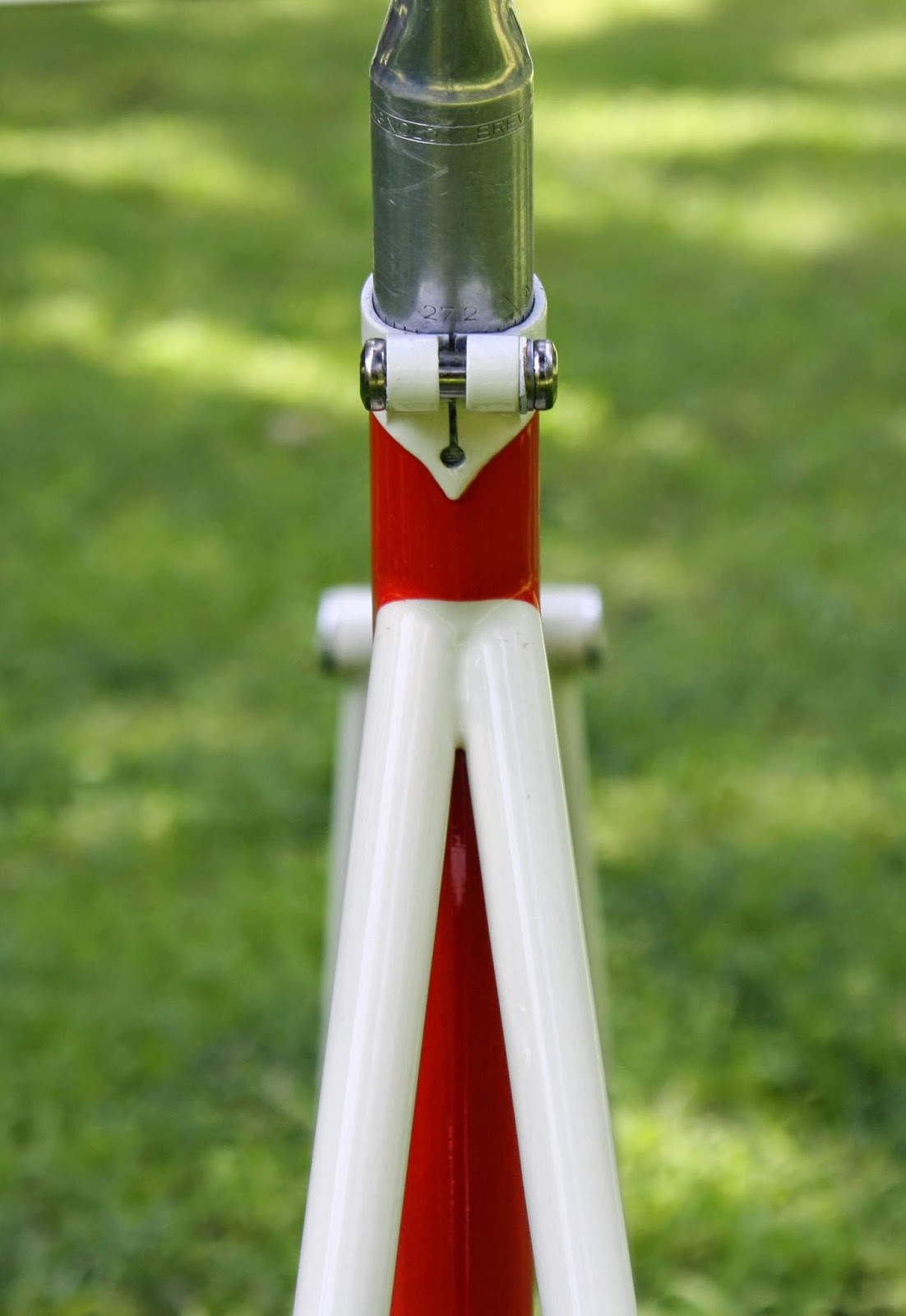 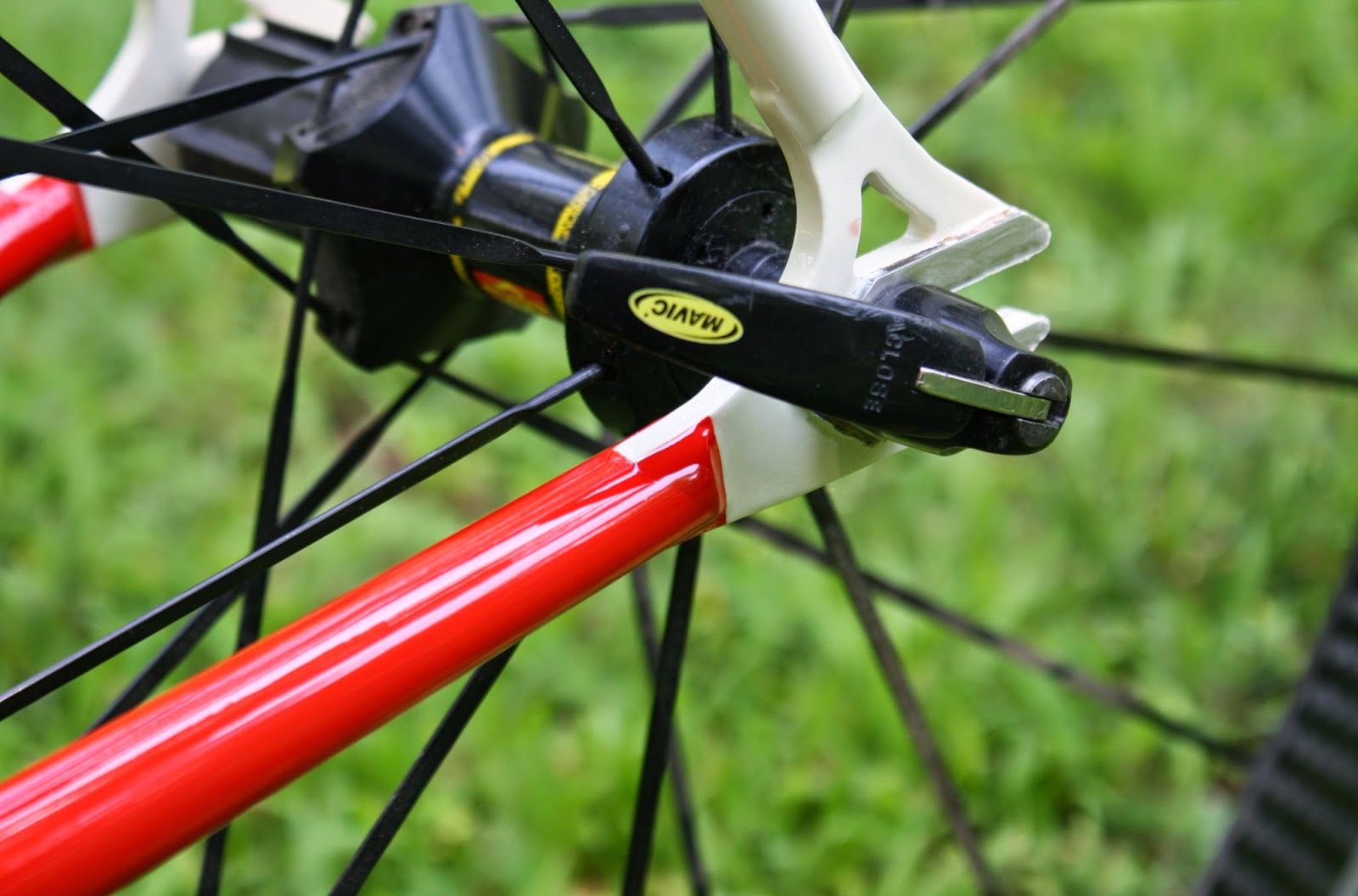 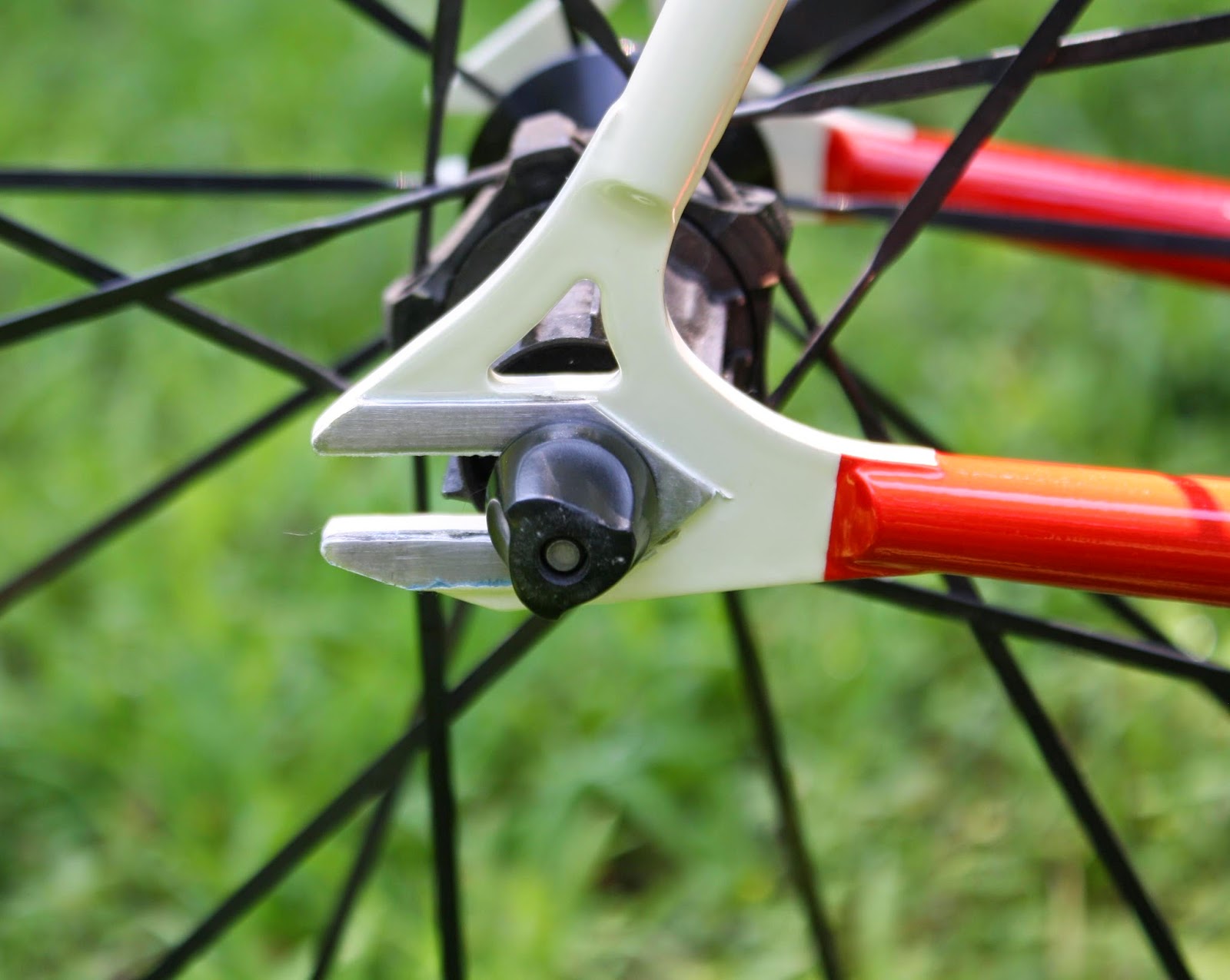 Just noticed that there is a small piece of tape on the edge of the dropout face. 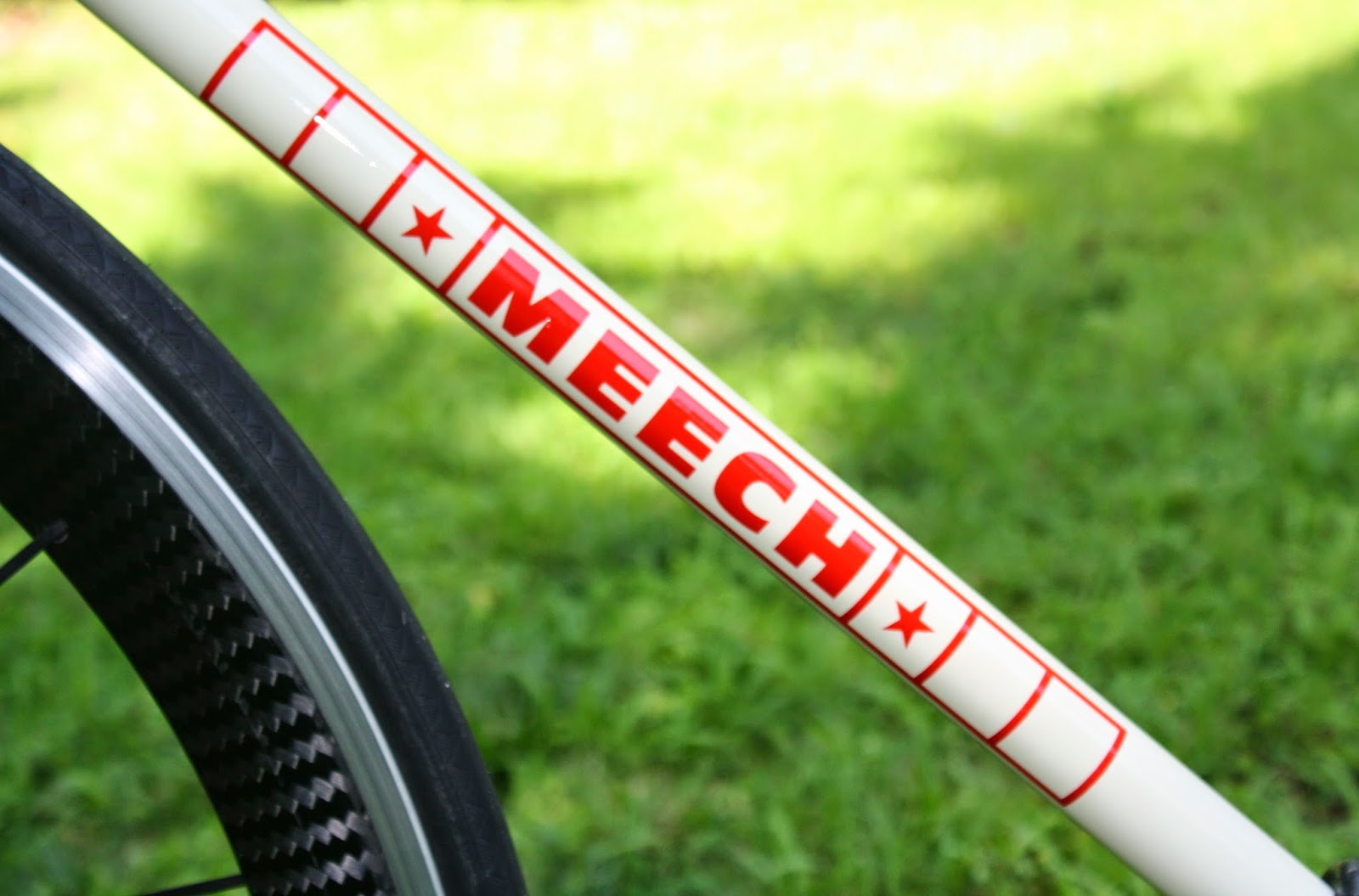 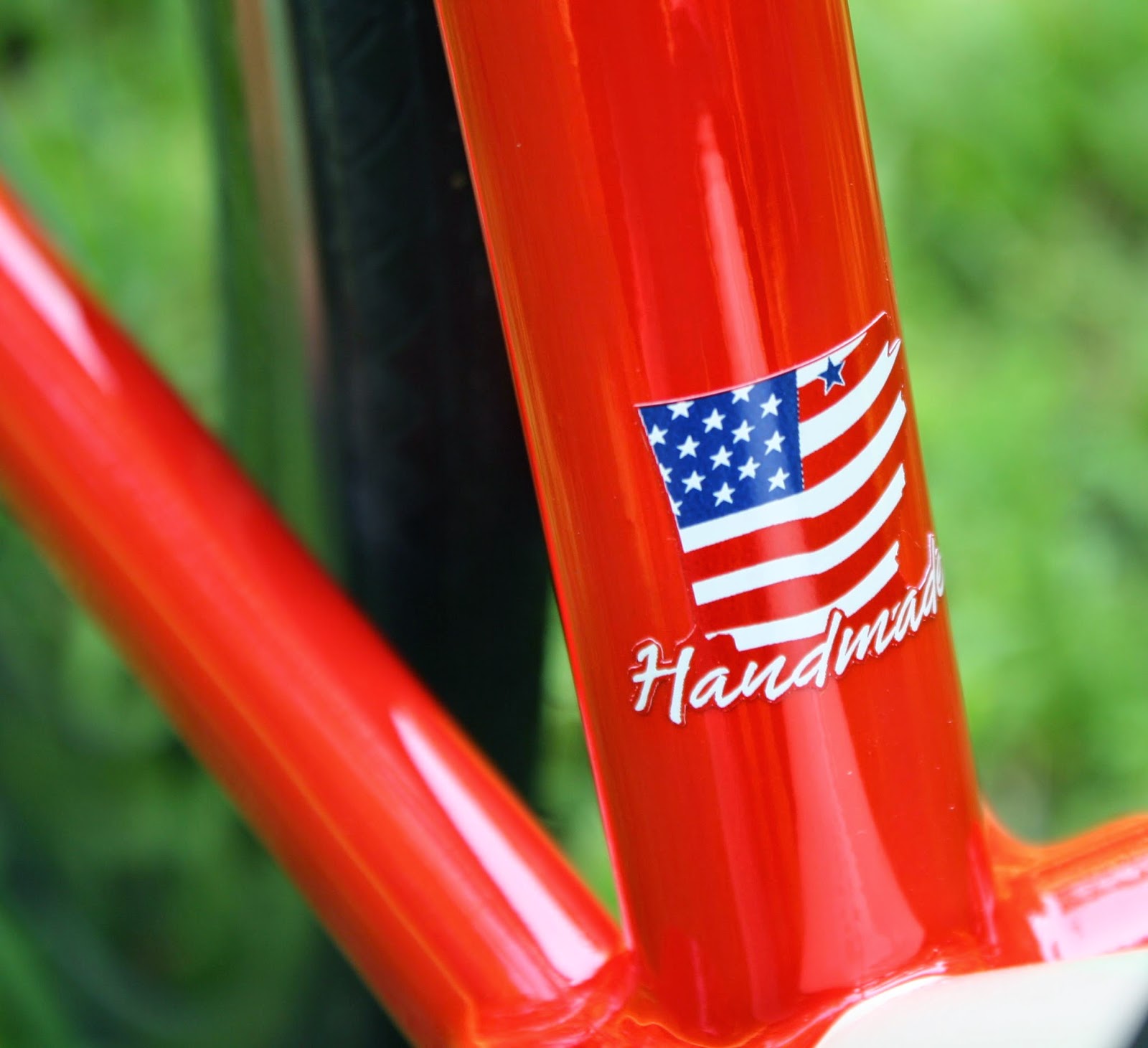 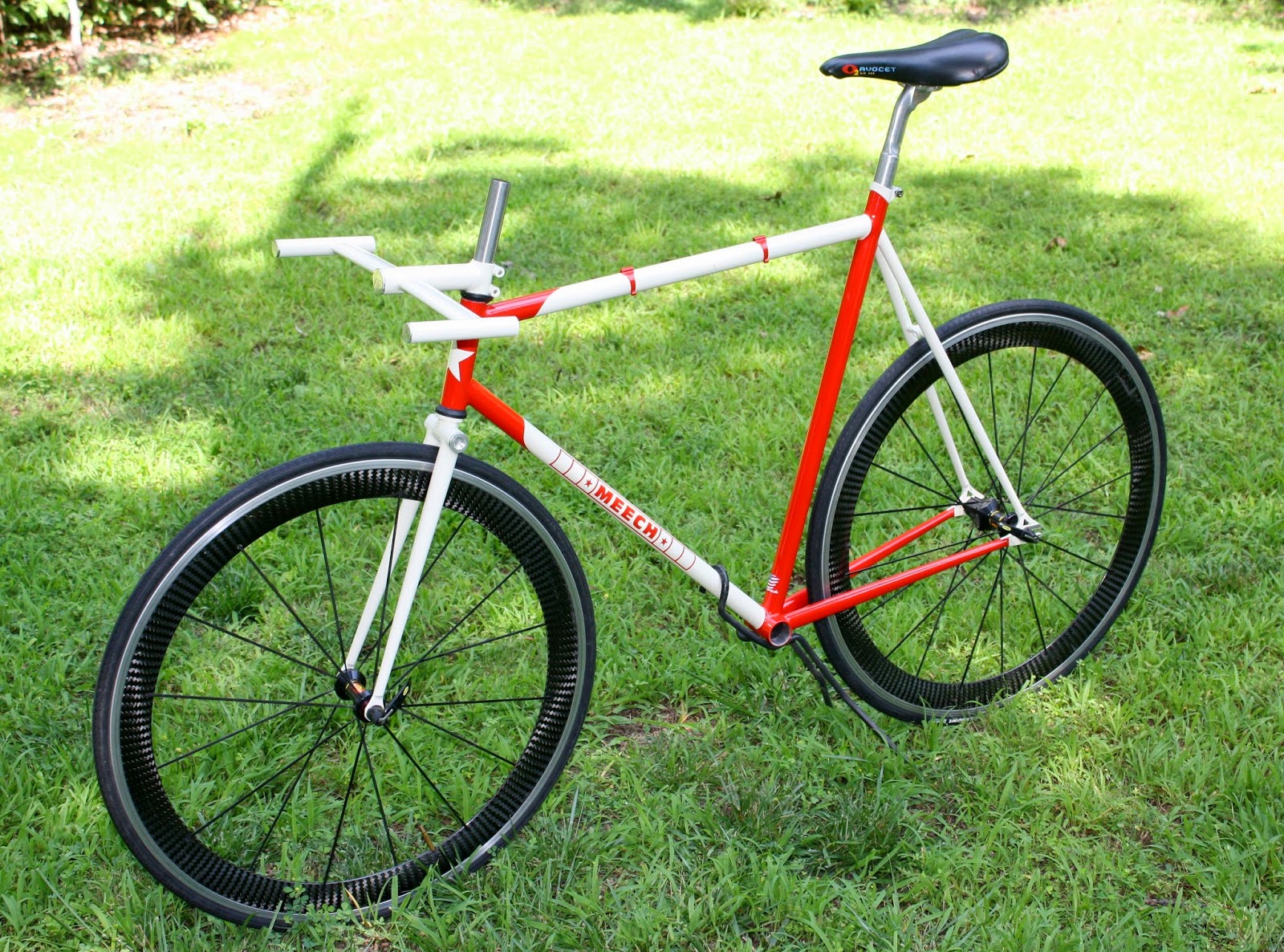 Ok, like I said, this frame was not made for anyone in particular, but after I finished shooting photos I decided to throw a leg over this thing just to see what it feels like.  There is no headset in it yet and the tires only had about 25 psi, so it felt a little shakey but outside of that this thing screamed my name.  It felt perfect to me, and it feels super-fast.  Then I just grabbed a yard stick to measure the seat height to see where it was sitting and it just happened to be right at 83cm from the center of the bottom bracket.  What height do I run my saddle at you ask?  You guessed it.  This one is all mine, scratch and all.

I heard there is some race going on over in France.  Lawl!  Its been excellent so far.  Stage 2 had an excellent finish and Nibali played it to perfection.  Stage 5 was a beautiful day to have a bike race or go cobble-skating, and now the mountains are coming.  Nibali is wearing yellow after I gave up on him two days before the tour started.  Just goes to show, you need to go with your gut feeling always, however, I think el Pistolero is fixing to light things up under everyones' arse.  Talansky doesn't look too bad either, he looks backwards. Get it?  Like my granny used to say, "Keep your eye on the road corn nut or you'll kill us all!" Don't forget about Valverde. Hang loose.

The same rawness that makes Nibali great is the same feeling that makes him vulnerable. He’s a wonderfully poetic rider in that sense.


“This is my kind of racing. I feel like the kind of rider of old,” Nibali said in Oman. In the past, he has suggested ditching power meters in favor of more exciting, unpredictable racing.
The sport of cycling was given Nibali when it needed him most, as a counterpoint to riders like Chris Froome, a scientific, strategic rider who is more likely to stare at power numbers than take big chances — chances he doesn’t need to take while blasting away at such high tempo. Nibali won’t ever be that rider; he runs on adrenaline and sensation. It costs him, but it pays off, too.
“Vincenzo is a really unpredictable rider. A lot of the guys, they kind of have … they’re like a one-trick pony. They’re either a good time trialer or a good climber, so they’re going to wait until the climb or wait until the time trial,” said BMC Racing’s Tejay van Garderen, who finished two spots behind Nibali, fifth, at the 2012 Tour. “Vincenzo, it could be any day. If it’s a tricky day where there’s a chance that something could happen, or if it’s gonna just be aggressive, then that’s the day that Vincenzo’s going to do something.”
Read more at http://velonews.competitor.com/2014/07/news/favorite-son-vincenzo-nibali-italys-latest-star_335782#ImOJFo4GzCDo8Yt9.99