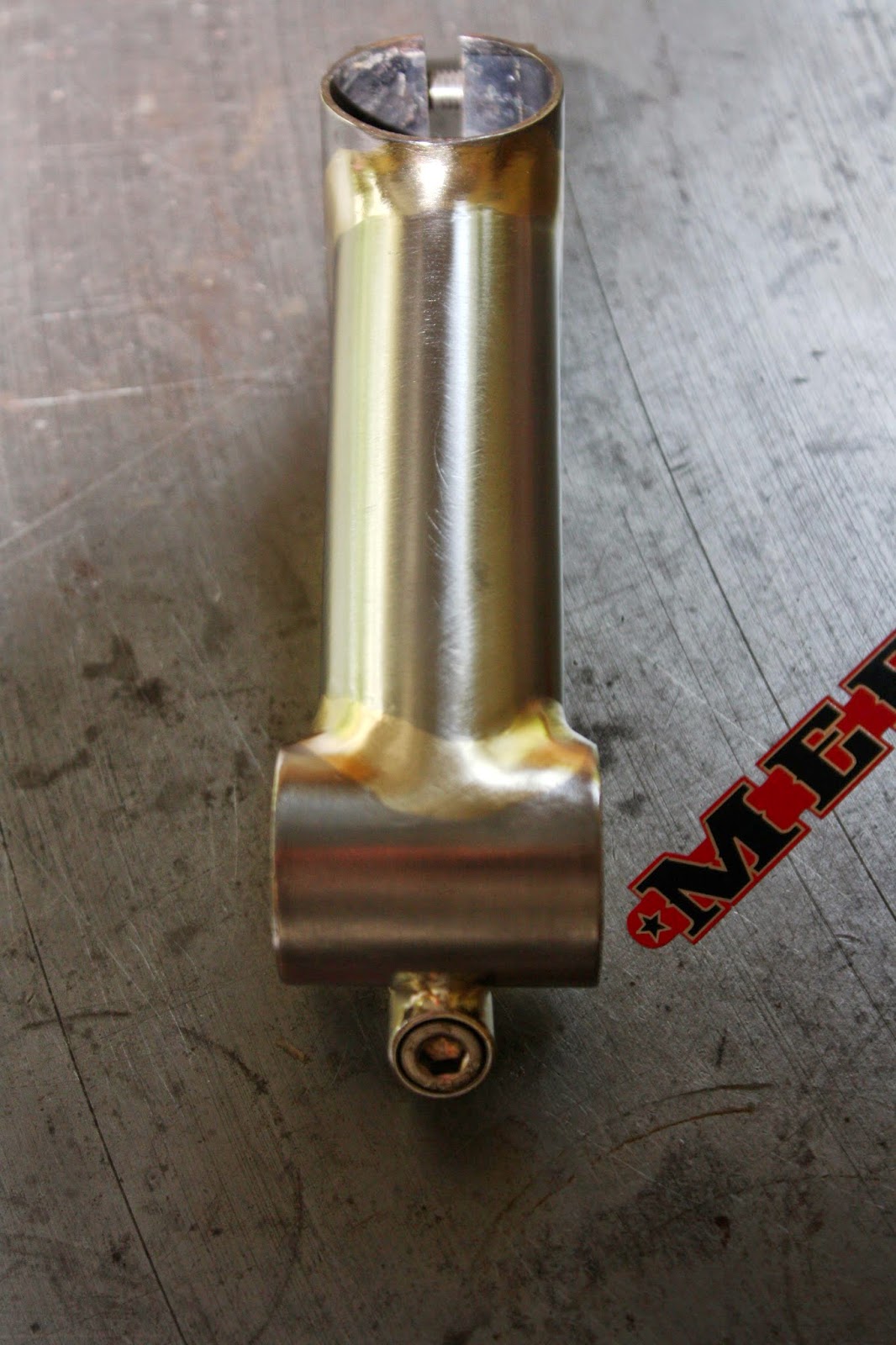 Here are a couple pics of some recent work I'm doing for Garrett up in the New York/New Jersey area.  Those guys up in the Northeast give me quite a bit of business and were some of the first frame builds I got orders for when I started.  They try to keep me busy and I appreciate it.  I also love the idea that my work is floating around different areas of the country.  Makes me happy.  Sorry, no video for that one.  Its a catchy song but this is purely a R'n'R blog.

Garrett wanted to go back in time a little with a single-bolt, no face-plate design for his commuter.  Its along the lines of a Nitto stem that he had, clearly with fillet-brazing though.  This is the deepest dropping stem that I've ever built, -25 degrees.

Whoa Jo
Getting down low
Talk about 'stealth mode'
If you're wearing camo
they'll never even know.

There are way too many folks wearing camo around here,
to church that is. 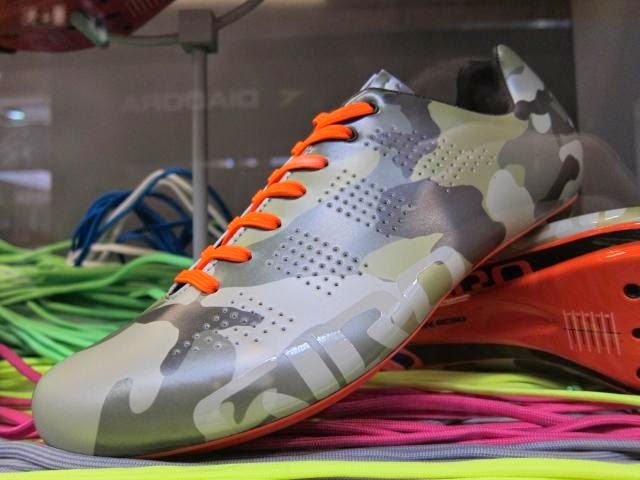 This stem resembles a slide as much as a stem but I love it and am glad he called me to build it.  As much as I love to see all the new ideas that come out every year I also love to take a trip down 'memory lane' every now and again also.  Lets go check it out. 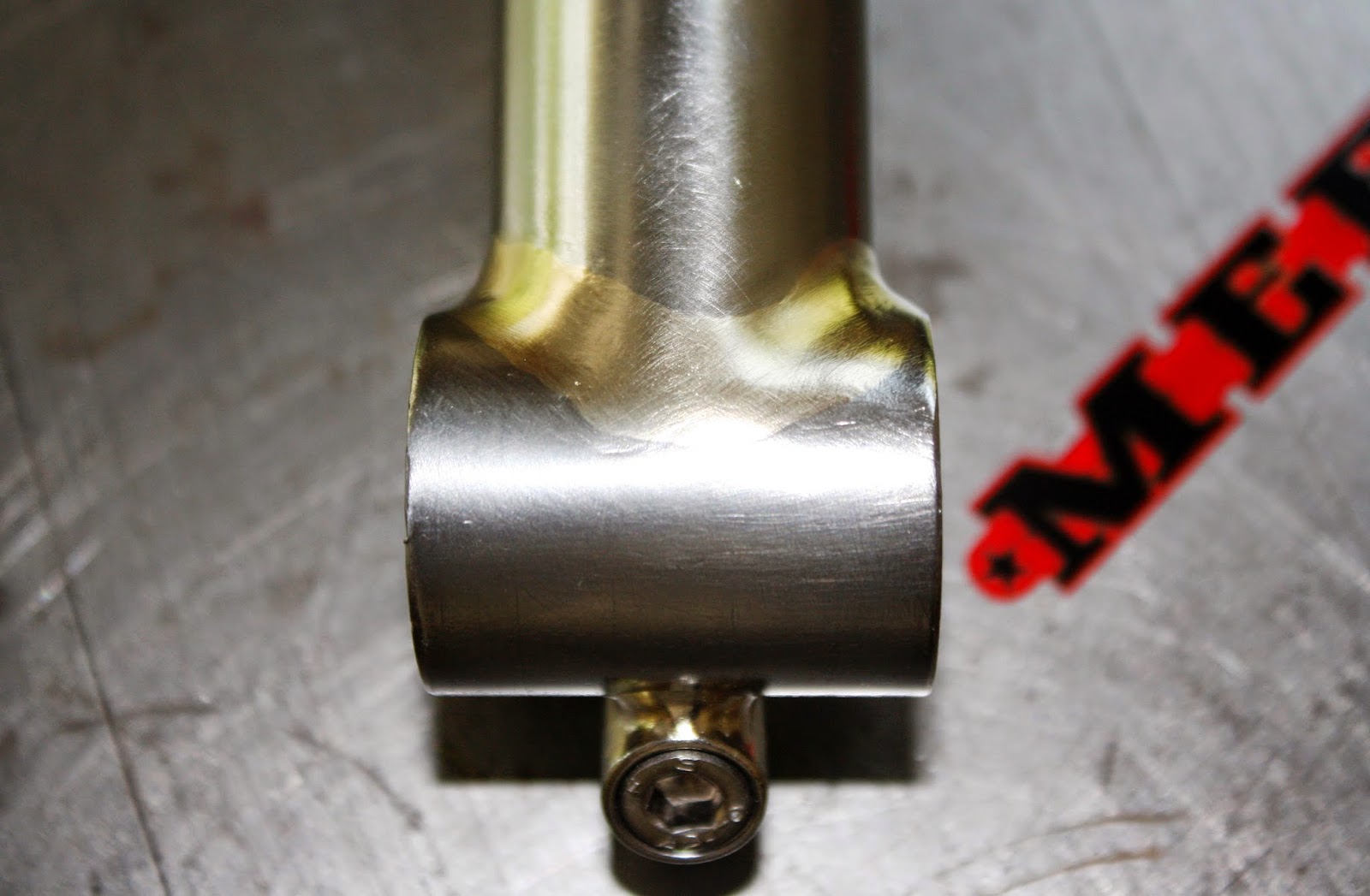 When its your work thats sitting front-center on someone's bike you want it to look as good as possible, so I layed down the best fillets I could and they cleaned up really nice with minimal work, in other words, no blood. 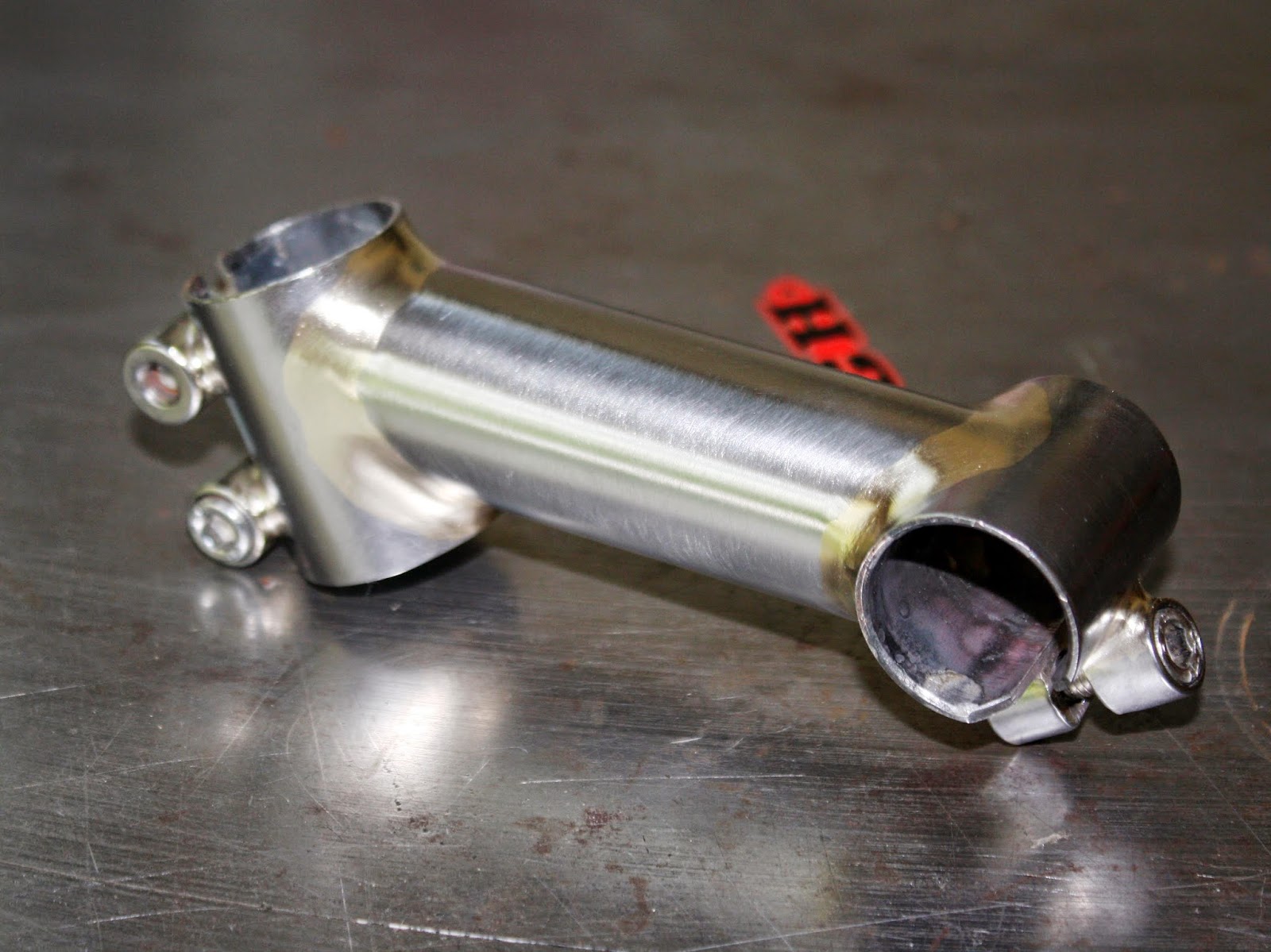 Handlebar clamp is for one inch bars with an inch and an eighth steerer. 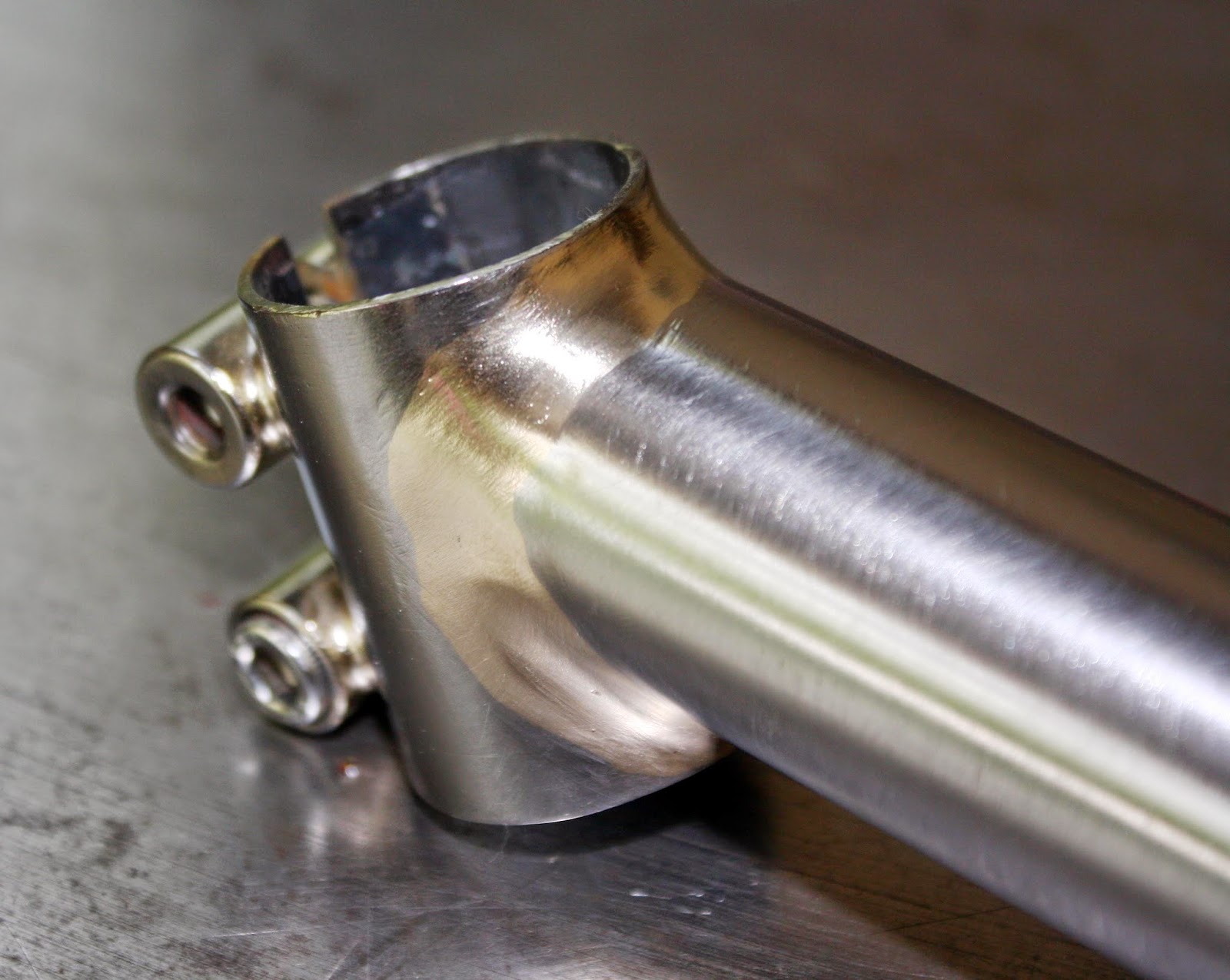 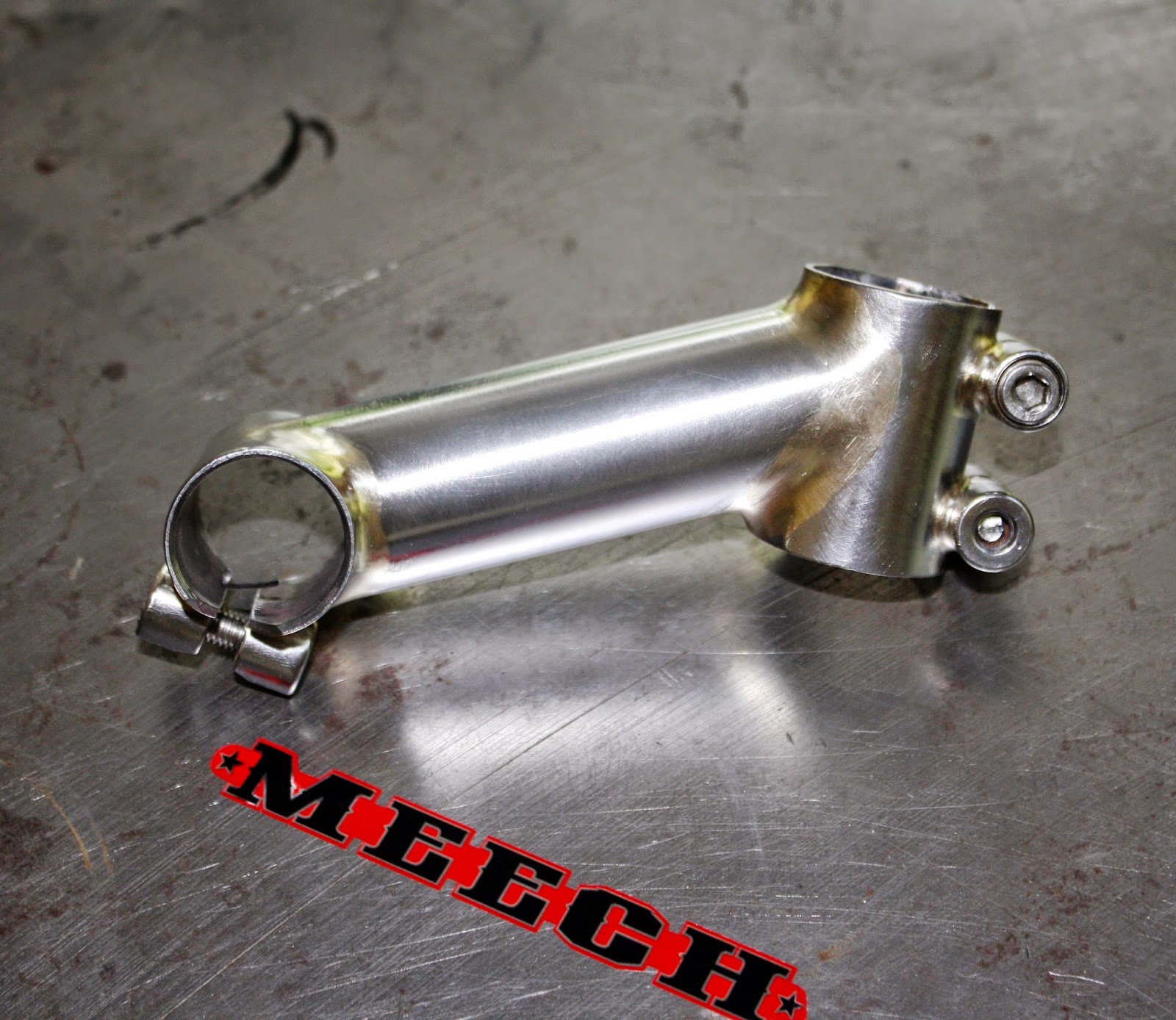 Its a little hard to grasp the drop on this stem until you see it on a bike but its got a cool look and I want one for one of my bikes.  If only my back can take it.

What else is new?  The tour has been interesting to say the least.  Froome didn't make it to the mountains, Contador does the "road grater", and Talansky really didn't stand a chance as far as I'm concerned.  He's good but I lost a lot of respect for him when he looked backwards in that sprint.  I'm sure he's happy about having that on his palmares for eternity, besides, I don't care much for pit bulls, the dumb ones anyway.  TVG from BMC is gaining some steam going into this final week and he's looking better than Talansky ever did.  If an American is gonna stand on the podium at the Tour de France I would think it would be better if they're good-looking.  I'm not sure that Tejay is exactly easy on the eyes, but as far as cyclists go at least he has all his teeth.  Did I ever mention the time my little sister was riding downhill with no hands.  OUCH!  Me and my dad were standing there while my sister was sitting in a dentist chair, after hours, screaming her head off.  It was pretty knarly and my dad just passed out cold on the floor.  I had never seen anyone pass out before, I didn't know what to do.  "Here dad, you want some of my Cheetos?"

If there was one place I would not want to be, other than that seat that my sister was in that late evening years ago, is in Alejandro Valverde's cleats.  He's been dreaming of standing on the Tour podium his entire career and now he's sitting in second with only a few seconds between himself and three other pretty strong climbers.  I would like to see him finish on the podium as I'm a bit partial to the Spanish riders but I wouldn't bet money on him, no way.  I'm thinking he may crack big time.  Maybe not.  I wish him well.

Well, I'm outta here for now.  I need to go find some type of clearcoat to put on this thing because we're not painting it. So there may actually be a couple more photos here shortly.  Thanks for stopping by.  Chao, or adieu, as I think they say in Fraince.  Yeah, I know I spelled in wrong.

Ya got aints
in yo paints
on the last week
in Fraince,
Mountains are looming,
time-trials are dooming,
so ya better get ready
to daince.

Can you believe that Creative Writing professor gave me a 'C'?
Unbelievable.
https://www.youtube.com/watch?v=y6Sxv-sUYtM