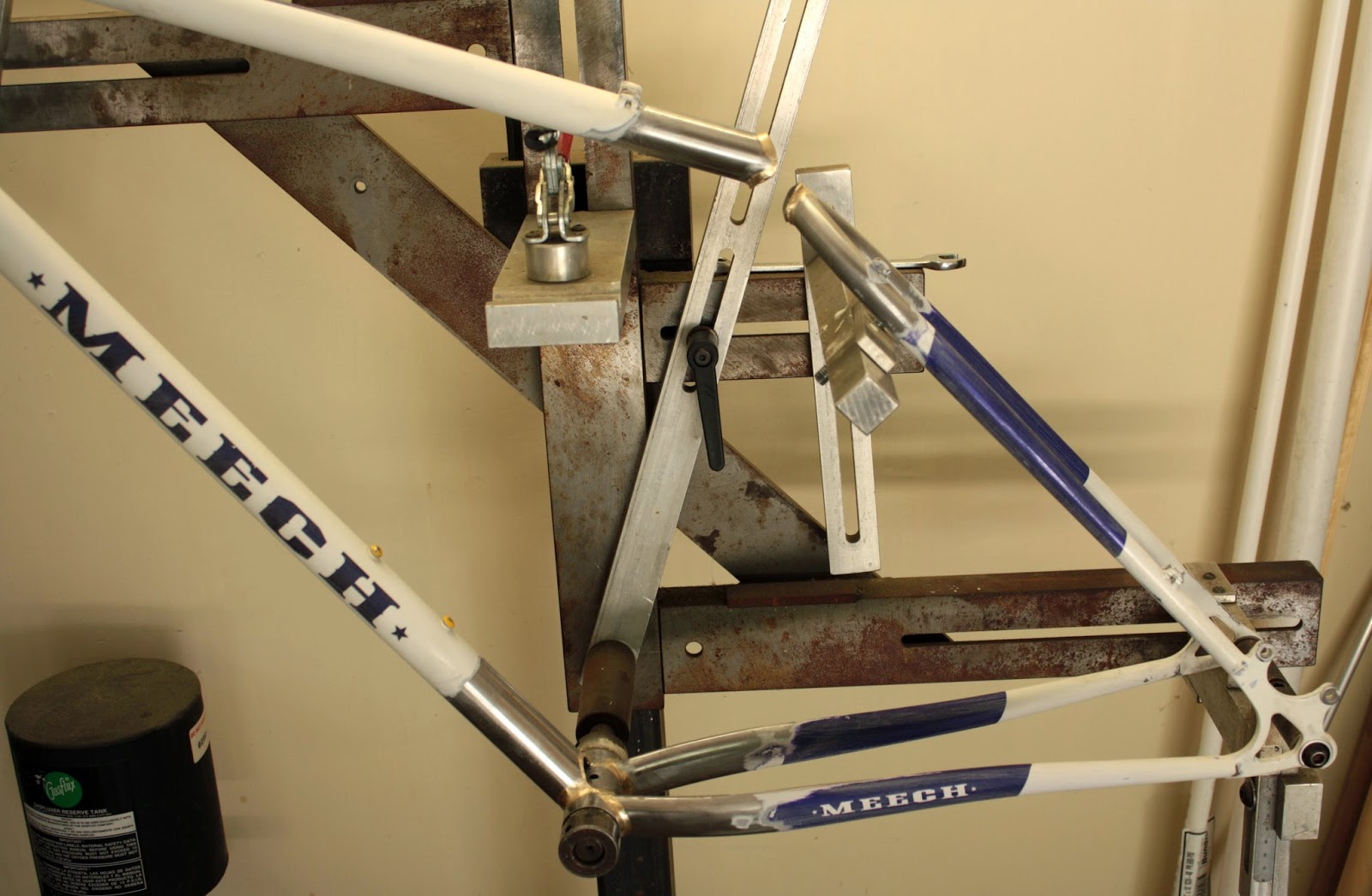 I had to do a little repair work on Yancey's 29er frame last week and just finished everything up.  As a frame builder, one of the better moments is when you've finished up a job for someone and have shipped it without managing to scratch it up somehow, not to mention hoping that it gets there without any damage.  I've been pretty fortunate thus far with only some minor incidents.  When the frame is gone and its been built up and ridden the last thing you want to happen is for the frame to come back.  It sounds like a nightmare however I've had to repair a couple of frames in the 6 years that I've been building and its never as bad as you think it might be, and sometimes you even learn something new from it or reconnect with the frame somehow and thats what happened in this case.

A few weeks back Yancey was at a mountain bike race and not long after the gun went off he realized he had broken his seat tube.  "What?"  How do you break a seat tube?"  Turns out he had changed seat posts the night before and was running a cut off post that wasn't inserted past the seat tube/top tube junction and somehow he managed to snap it off.  In the typical Yancey fashion, he stopped, picked up the broke off seat post and saddle, stuck it in his back pocket, and somehow managed a third place, mind you with no injuries to his anal region.  He did complain about some arm fatigue. Can't imagine racing 20 miles with no seat and a jagged steel seat tube sitting patiently like a pit bull waiting for you to get within his chain's reach, but I reckon your arms could hurt a little afterward.

Yeah, you heard me.  The new MEECH bib shorts are gonna have spandex back pockets.  Don't even go there because we've got a patent pending, and they're not like those fake blue jeans ones that Carrera and Marco Pantani used to wear either, God rest him.

"What'd you say? You want me to wear what while I'm racing my bicycle in front of millions of people?  Sorry pal, there's not enough money in the world.  I'm outta here." 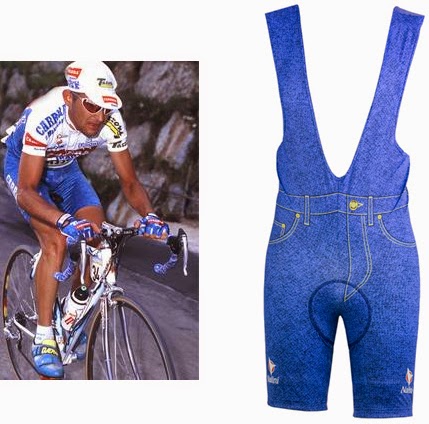 "How are you gonna patent a back pocket?"

Thats easy.  Ours is gonna be better.  See?

I've replaced about every tube on a bike frame at one time or another but never a seat tube.  I figured I could build a whole new frame quicker than replacing a seat tube.  A lugged frame would be much easier than a fillet-brazed frame I would think.  I wasn't sure really how to go about it. At first I thought I might just cut the rear end off and build a new front triangle and join it.  Then I realized that would be a big waste, and I figured I could get away with just cutting out the seat tube and top tube.  And then at the last moment I just said to myself, "Just try to cut the seat tube out, see what happens, and go from there."  So a trusty Dremel tool and a few minutes later and I had the tube cut out and started cleaning everything up to make room for the new seat tube.  Things worked out pretty smooth and I learned a couple of things.  First off, always make sure you have your seat post inserted into the seat tube cluster.  I never imagined that a steel tube would just break off like that even if the seat post wasn't fully inserted.  It was actually a combination of things that led to the failure.  Besides the cut off seat post not being inserted deep enough to support everything, since this was a mountain bike I had cut the seat tube off down into the thinnest part of the butting.  Thats lesson #2.  Hey, what can I say, this is a race bike and we're shaving grams here.  I never would've imagined a seat tube failure, who would've? Funny how you never know where the line is until you cross it.  I'm pretty good at that.  All is well that ends well.  Check out the process below. 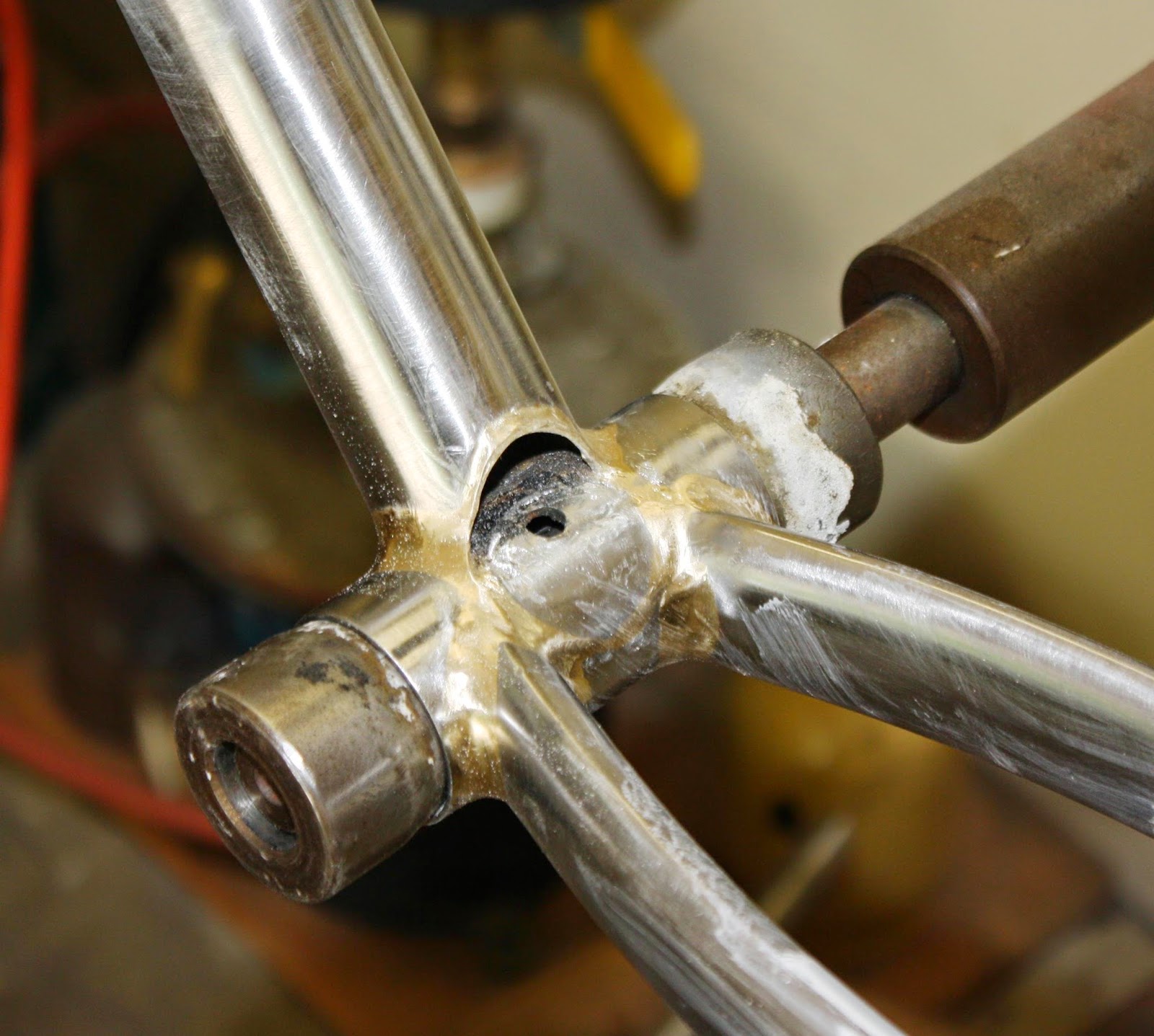 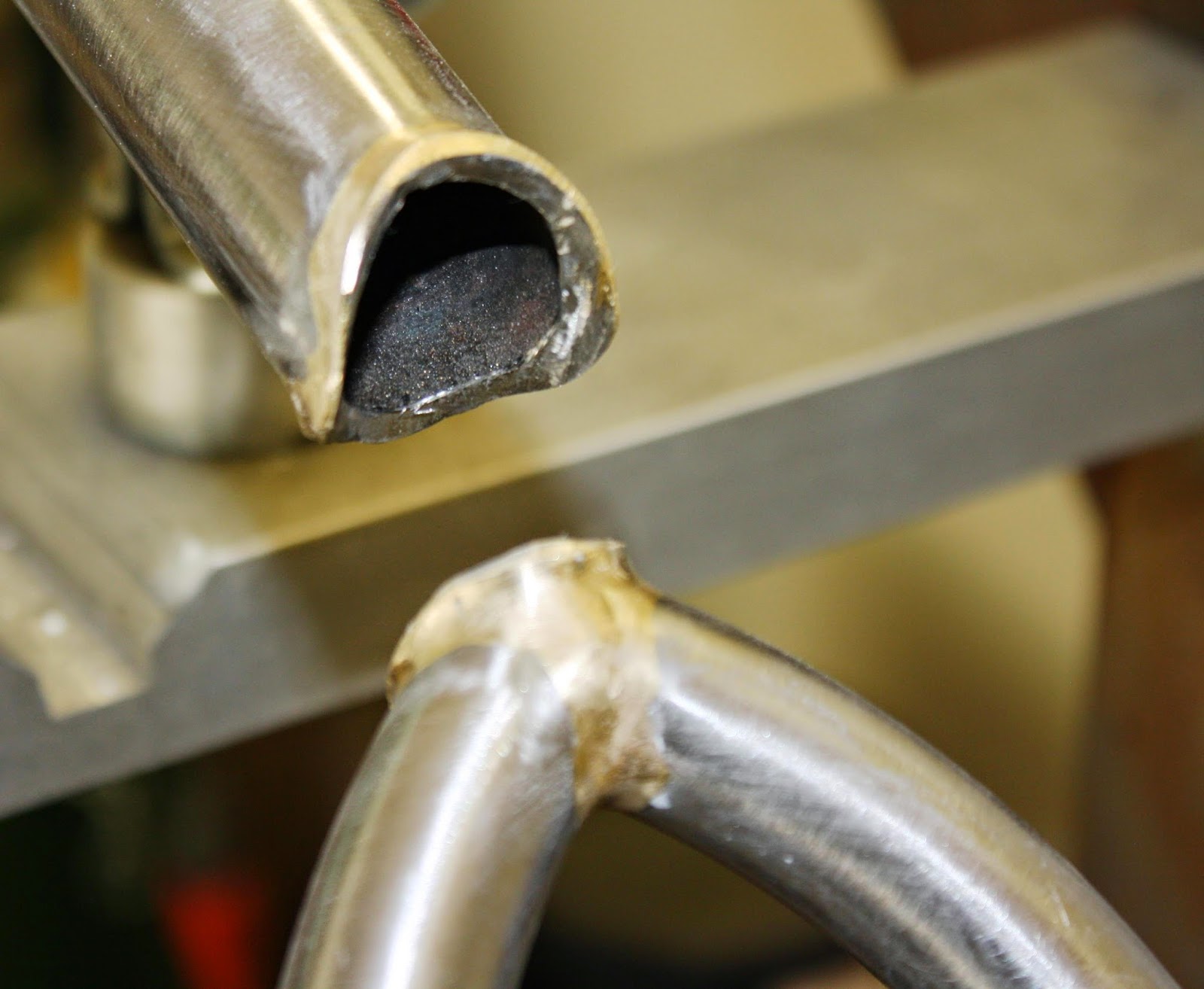 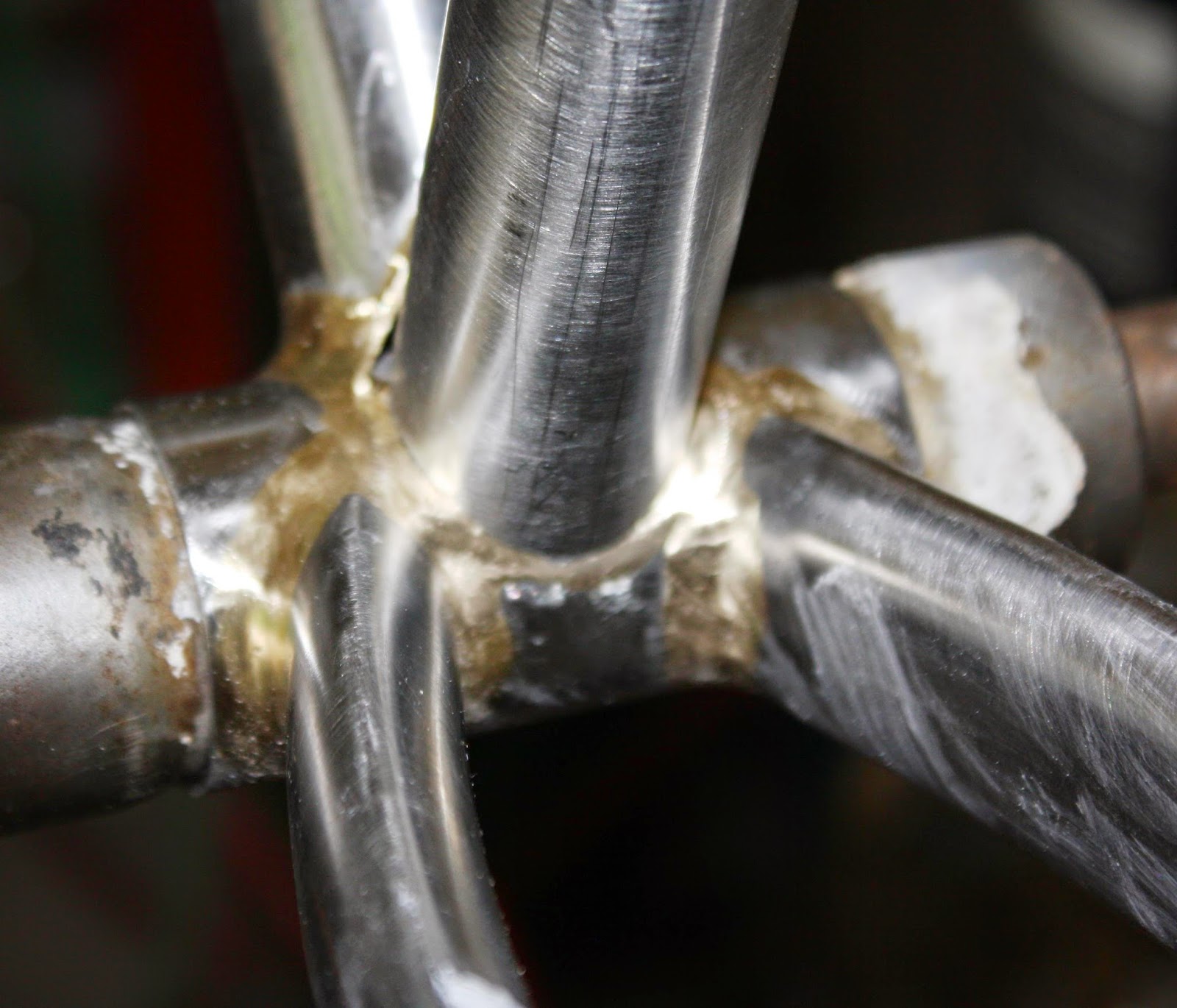 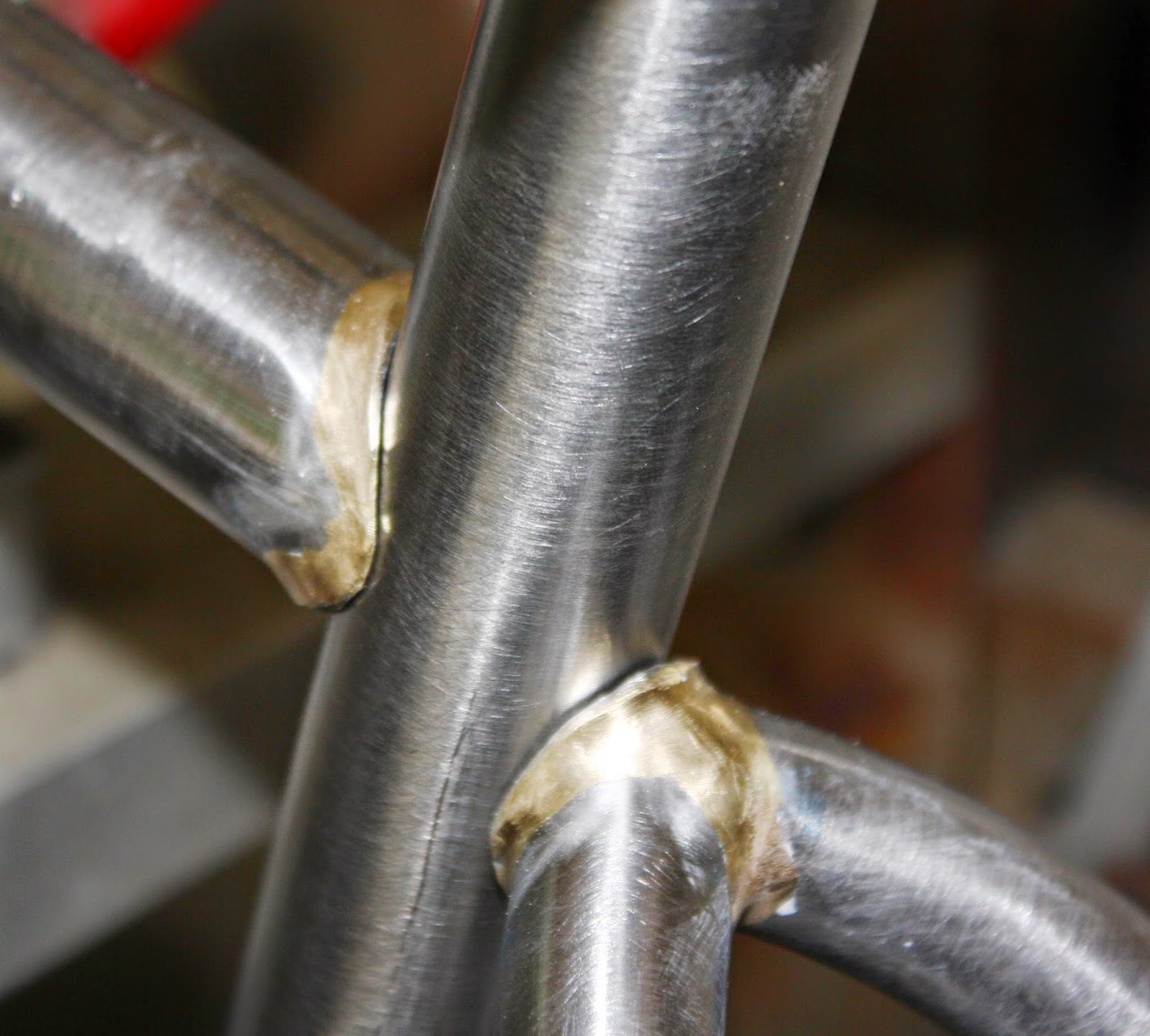 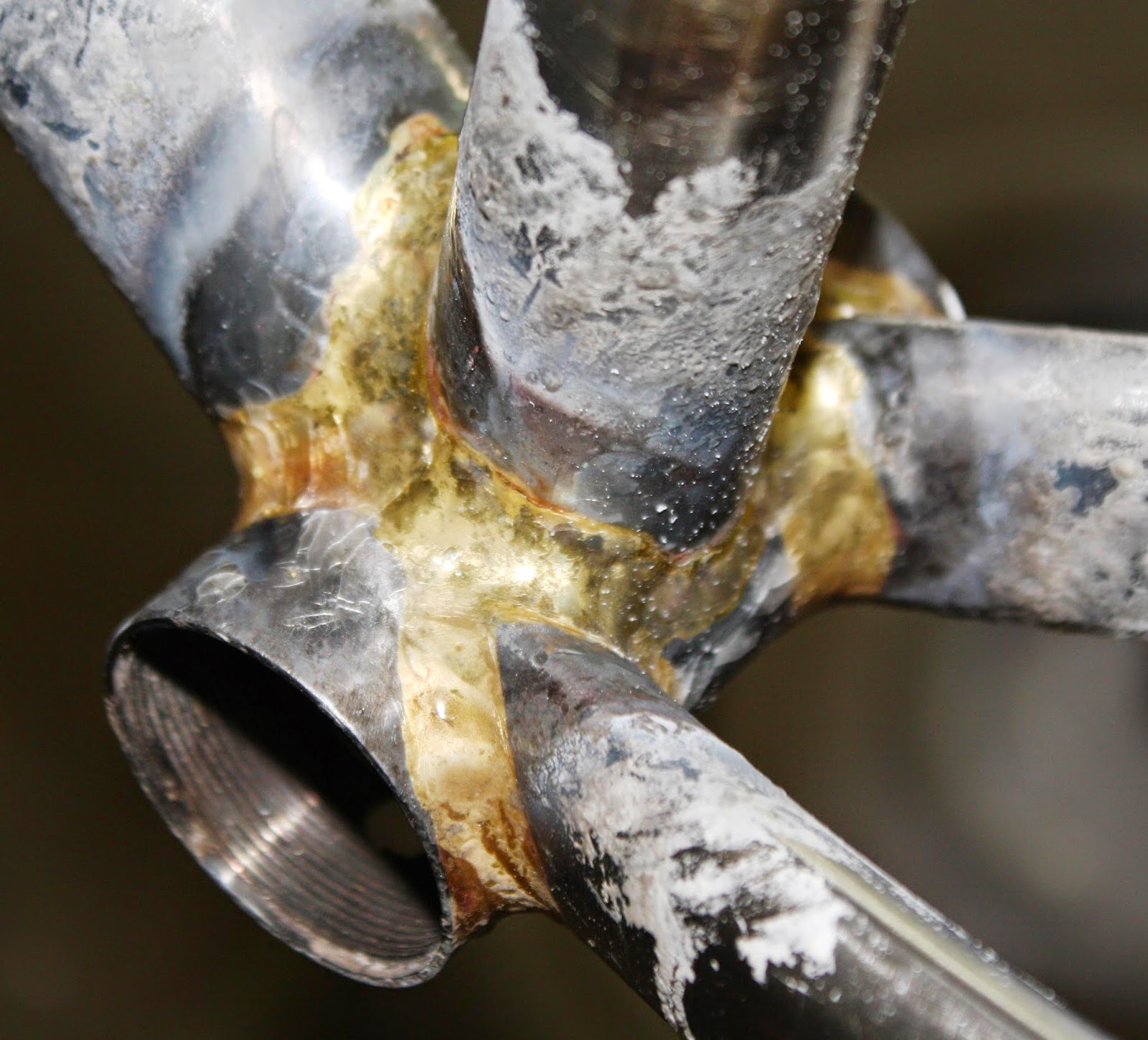 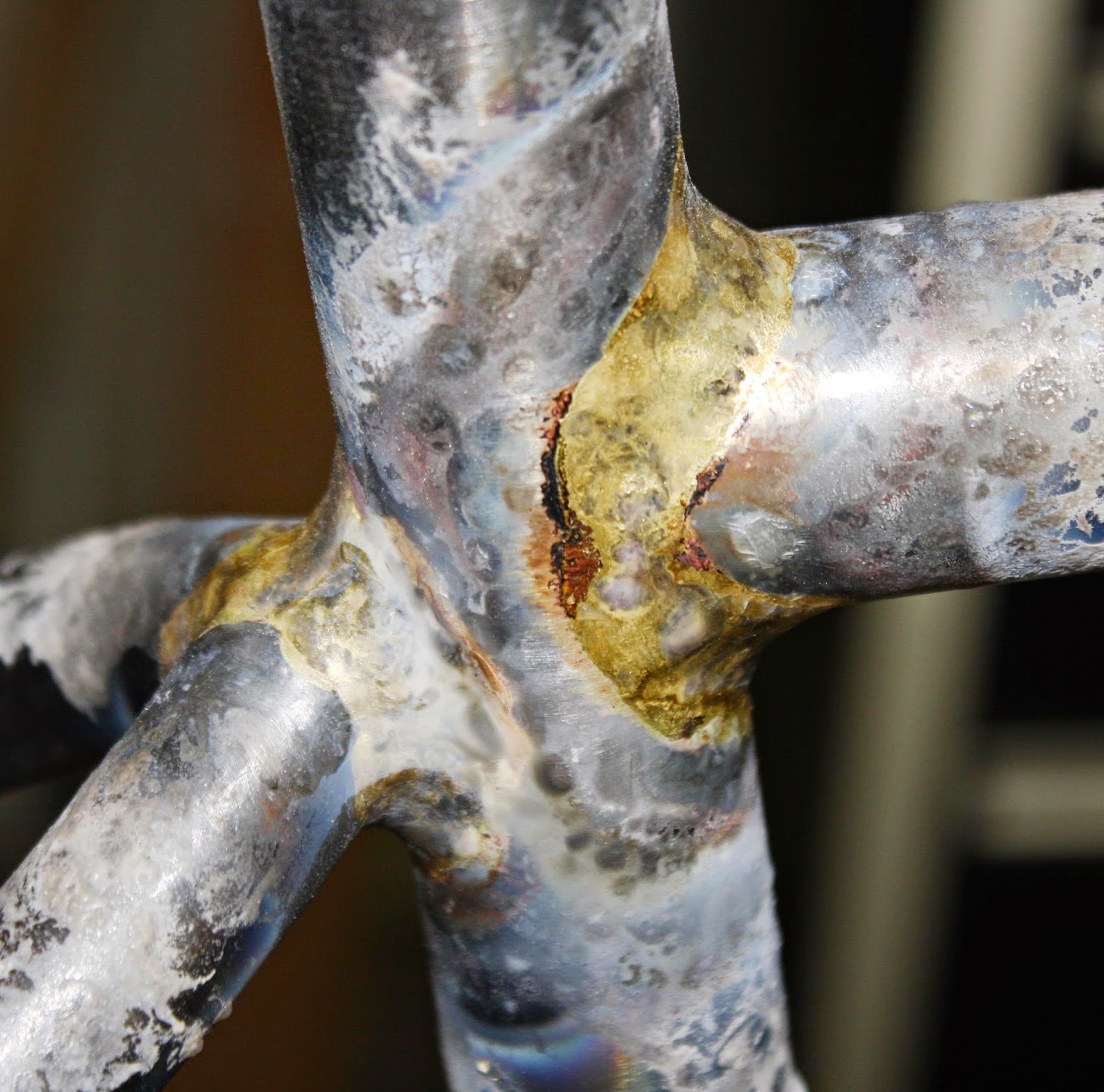 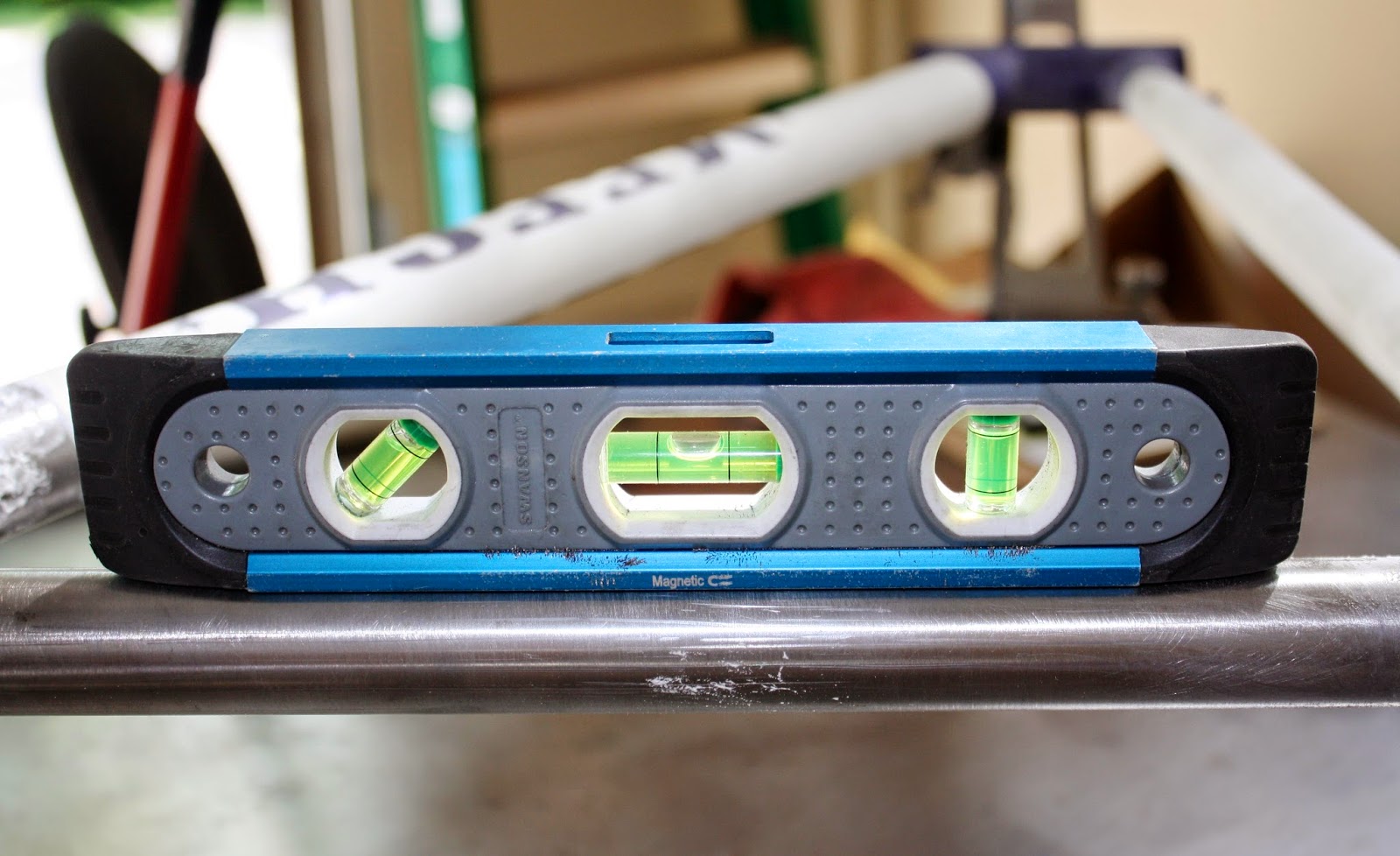 Same as it ever was. 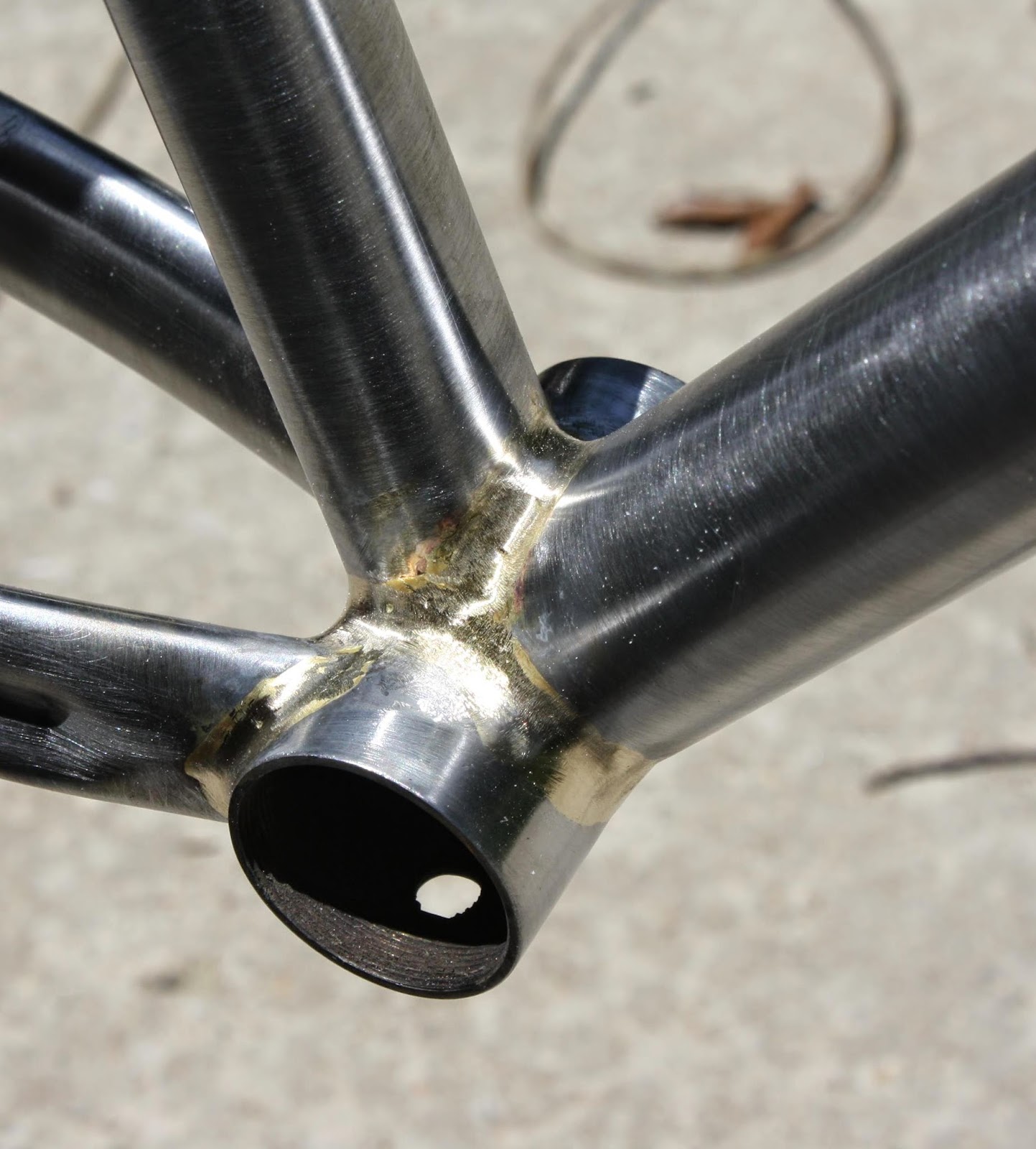 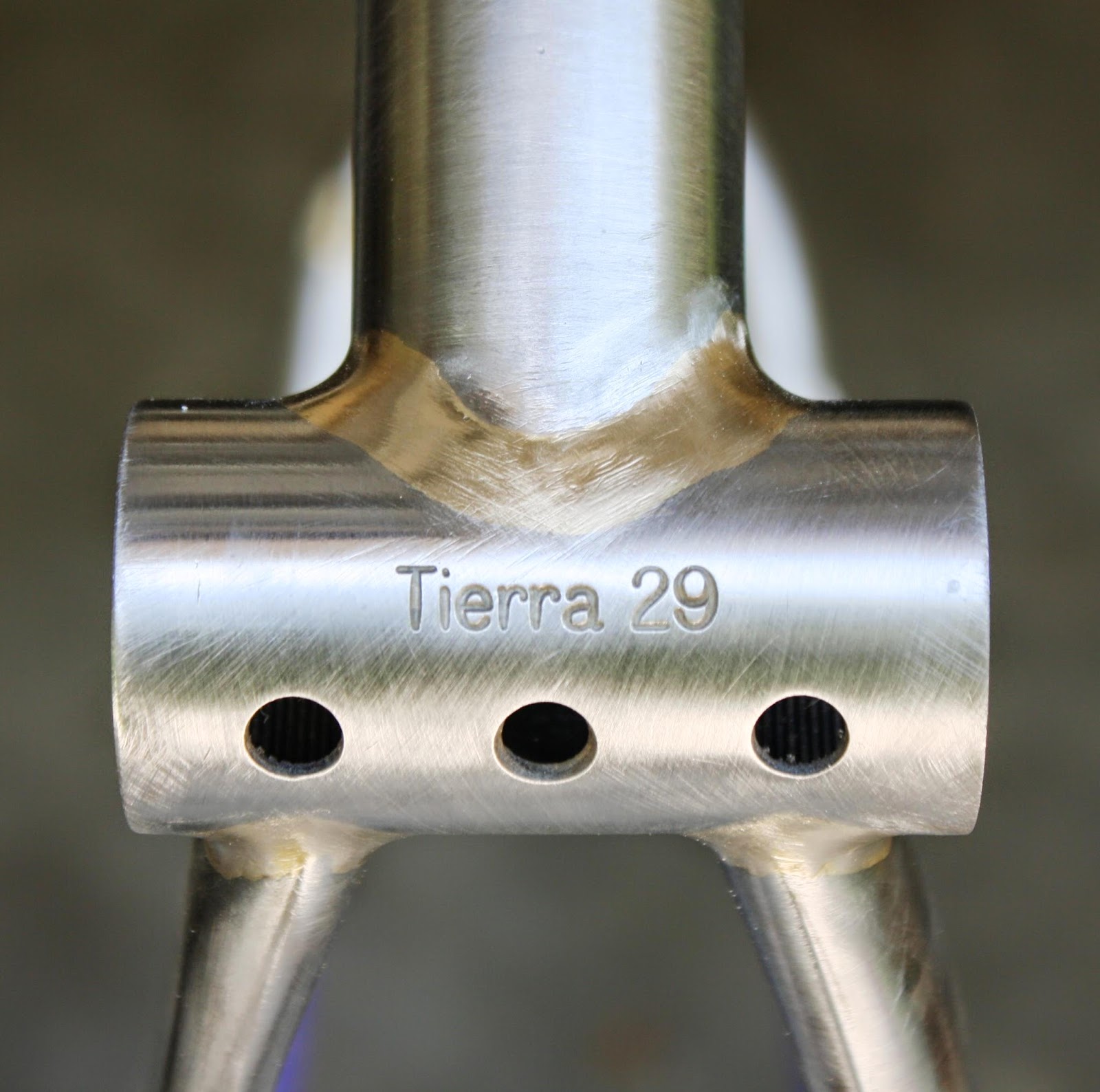 Never even touched this part, I was just reminiscing.  Did I spell that correctly? 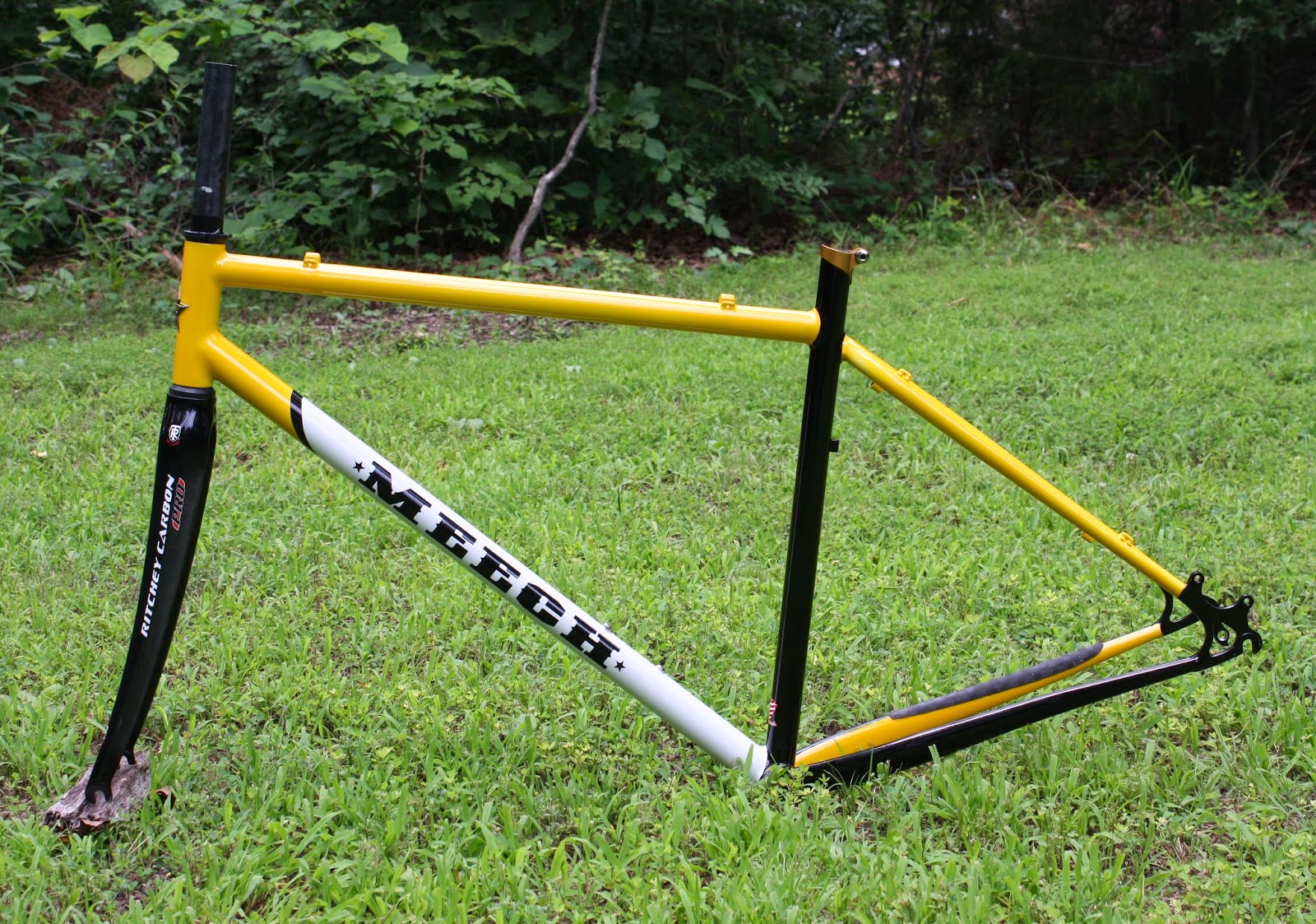 I didn't have a mountain bike fork to throw on it so I just used what was available. These colors are more along the line of MEECH racing.  I never cared much for the old paint job, it was white and purple and I don't know what I was thinking, but I vomited a little in my mouth when I first saw it.  This is much better. 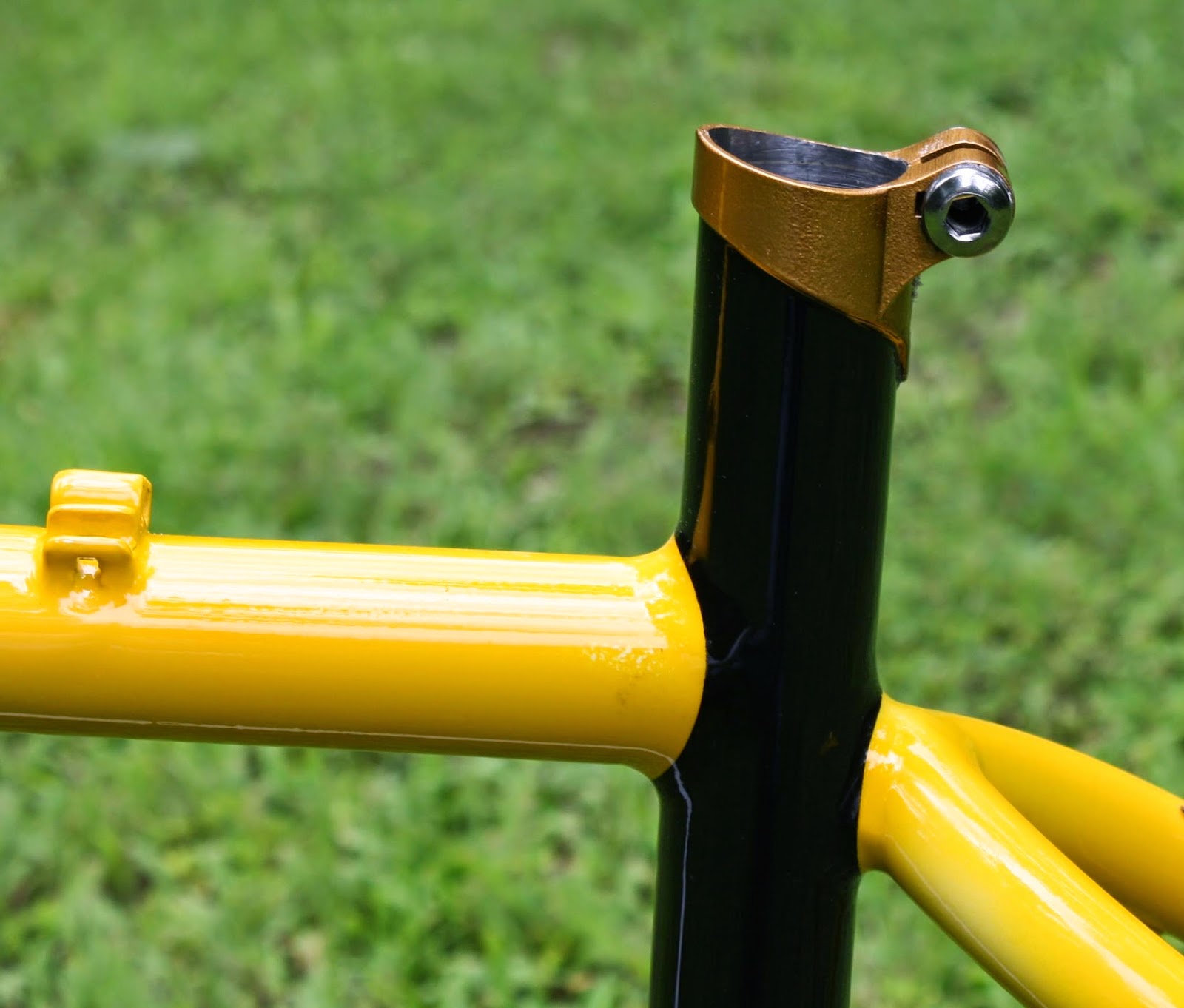 "Did that boy paint the seat lug gold?" 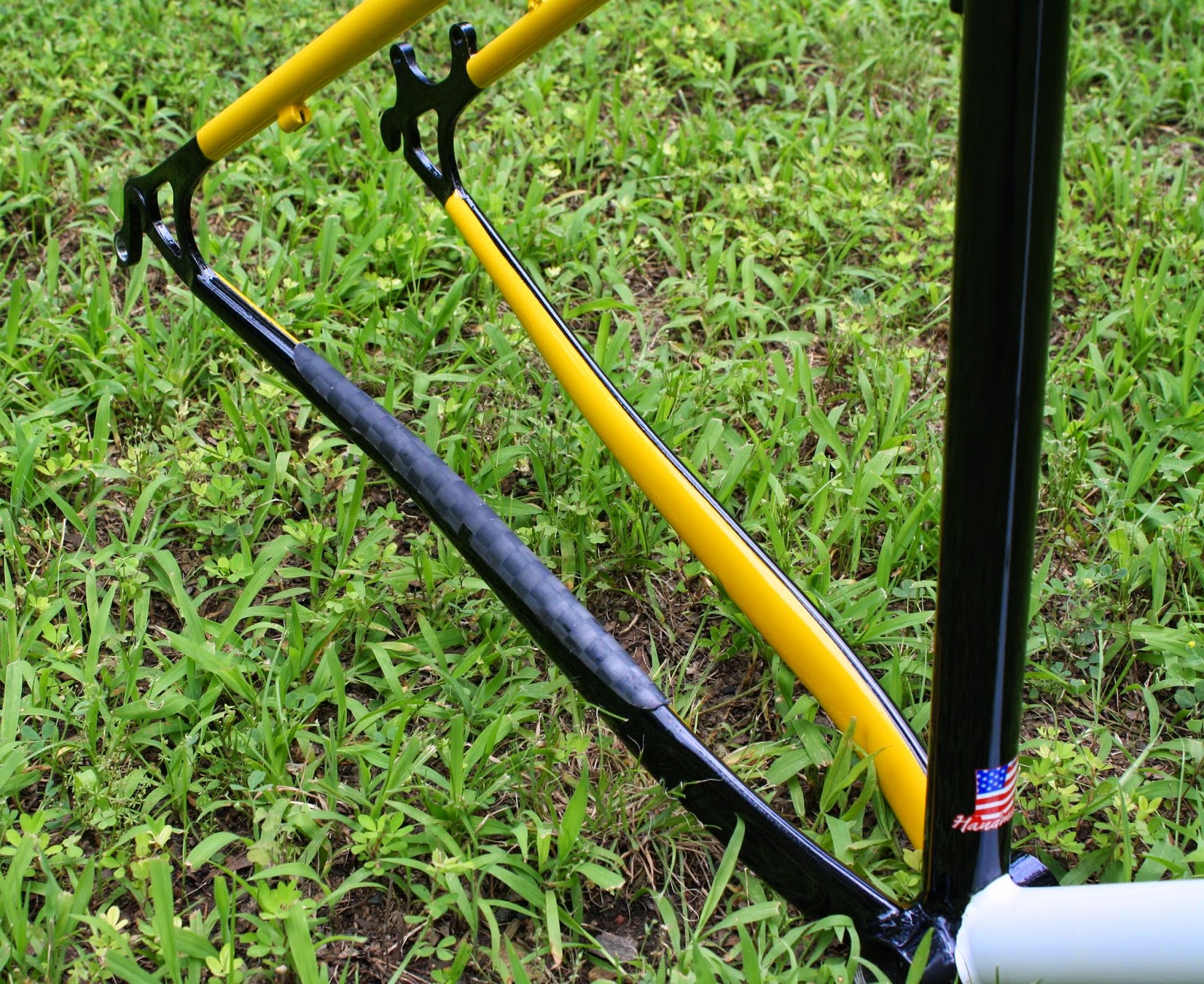 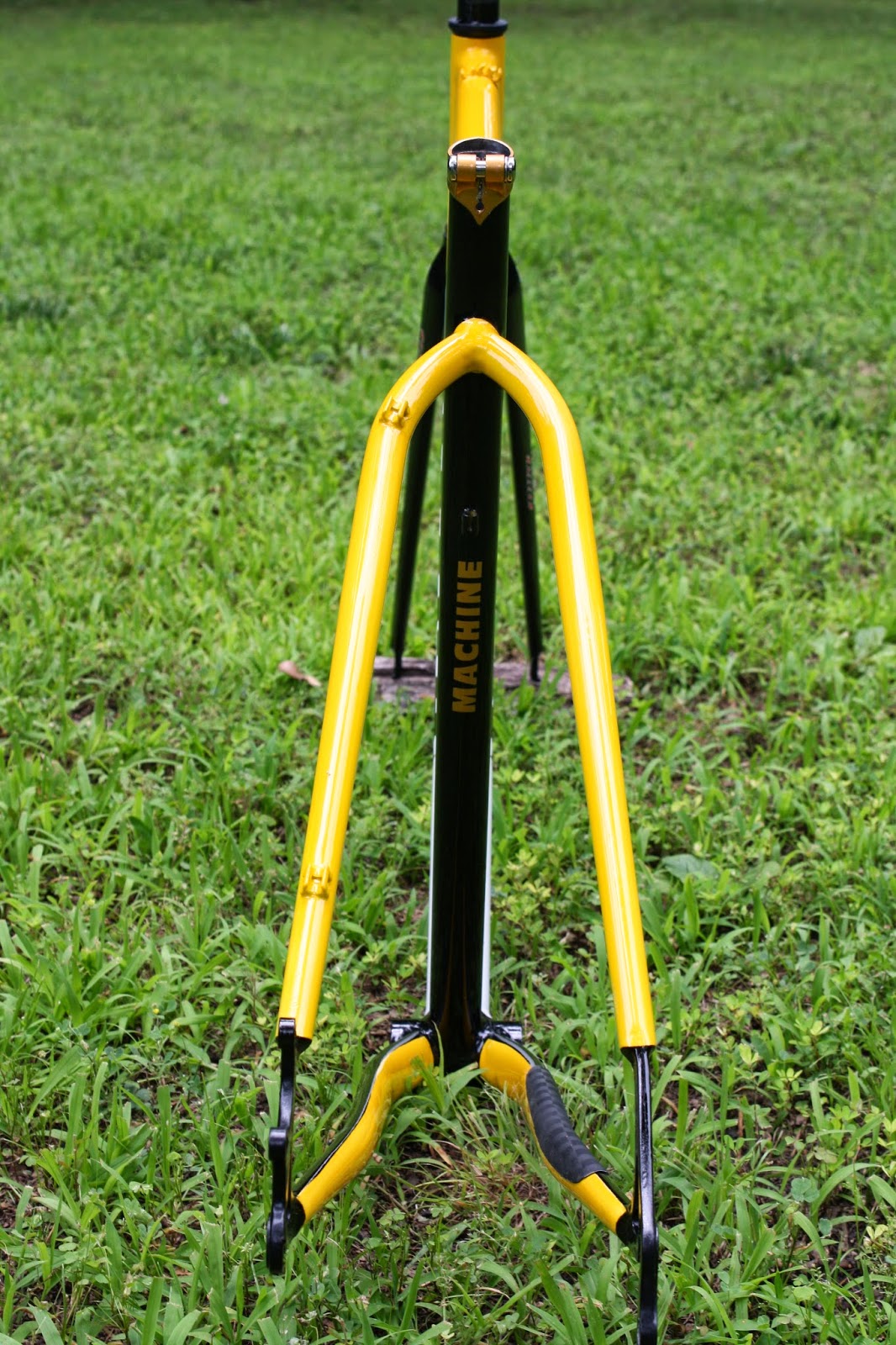 Of course I painted the seat lug gold, otherwise it wouldn't have matched the gold "machine" logo on the back of the seat tube.  Come on, you knew I was gonna scribble on it somewhere didn't you? 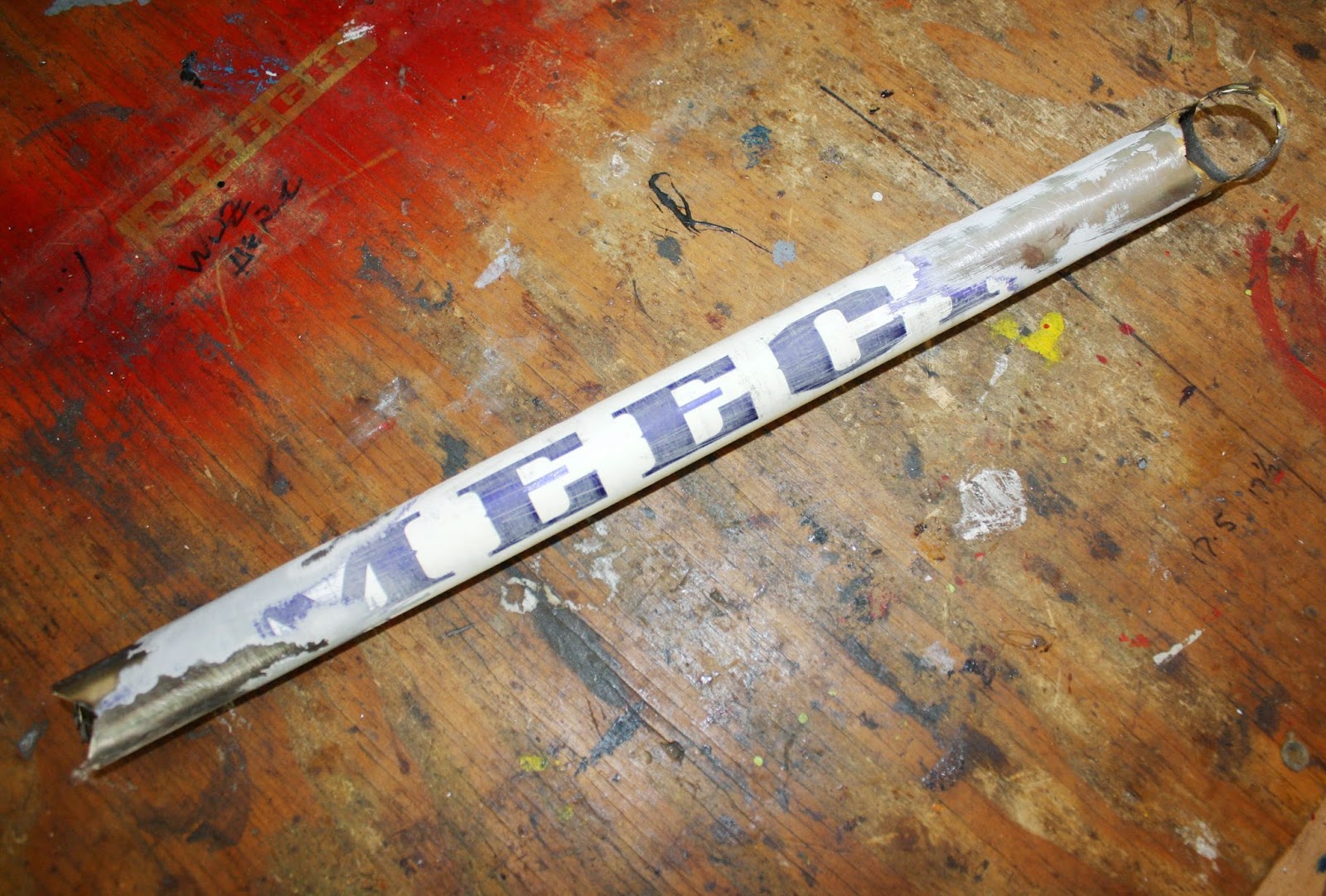 And this is all that was left.  Almost like nothing more than a bad dream.  Now if you'll excuse me I'm gonna go throw this thing away before my momma slaps me upside the head with it.
Chao.