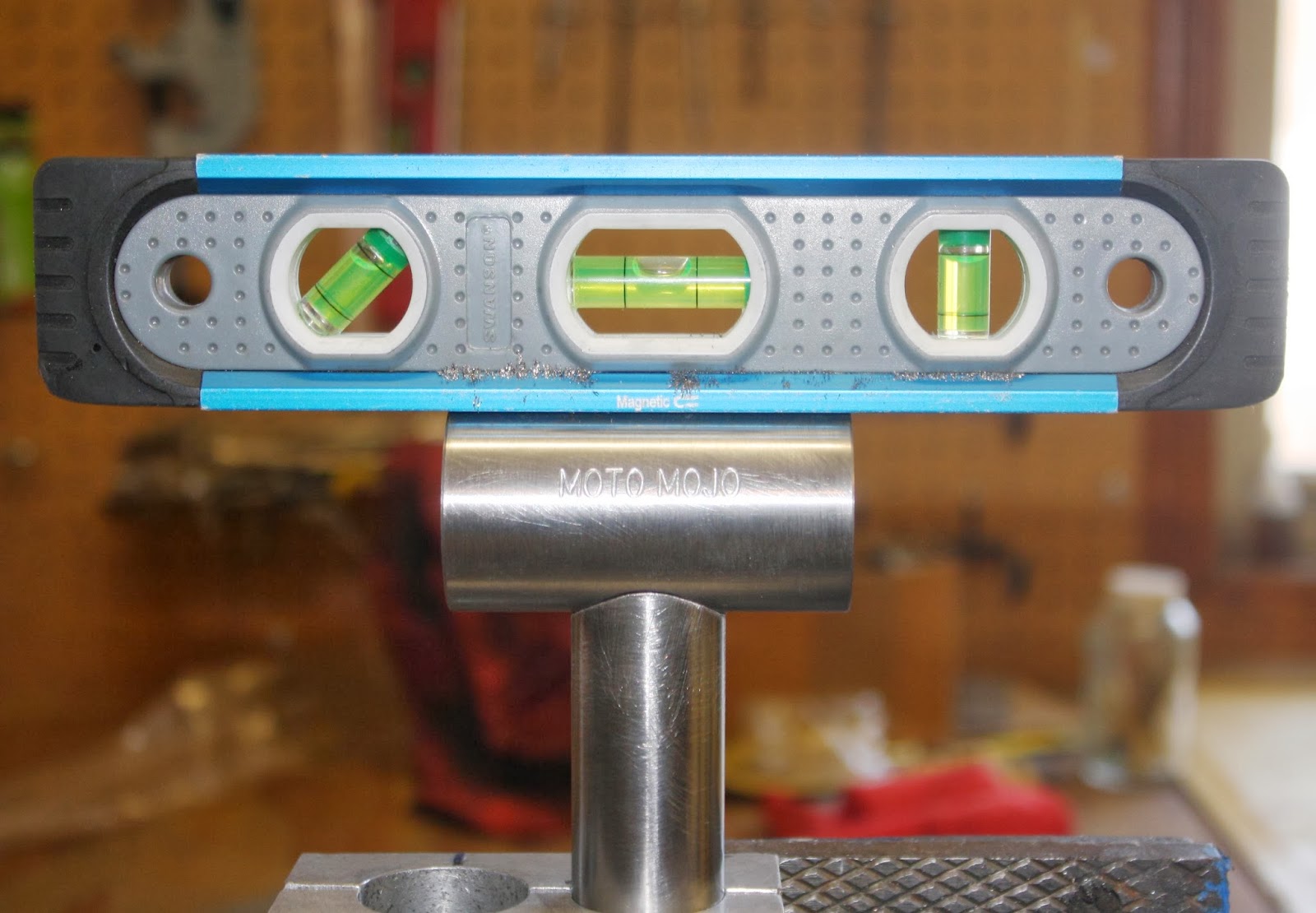 This week I got started on a new frame for a young racer out of the Northeast named Sandy.  This is an interesting build for me because its one of my favorite styles of bike, the gravel-road racer and its also gonna have S & S couplers on it.  Another reason this is interesting is that it seems as though Sandy and I have similar riding styles as we both have the same build, tall and leggy.  Sandy is a couple of inches taller than me however we are riding very similarly built frames, the only difference is his is a couple of centimeters larger.  I'm
6'2 1/2", and if you use all those old frame sizing techniques/formulas they would say that I need to ride a 61 cm frame.  For a few years i did, but after racing for a while and experimenting with different setups I can now ride comfortably on most any size 58, and thats with a 120mm stem and the seat basically in the middle of the rails.  "Its evolution baby!"  It actually is.  Over the course of a few years of riding/racing my body became more flexible and I felt comfortable in a lower, tucked position.  I remember riding someone's 58cm bike once and thinking, "Man, this thing feels great."  I immediately went and ordered a 58cm Carrera Volans if my memory serves me correctly. Thats steel by the way.  Actually the last frame that I had before I starting riding my own stuff was the Scott CR1 and it was actually a 57.5 cm.  Last summer i rode Yancey's 54 cm Cannondale EVO just to check it out, and while it was definitely too small for me I managed an hour on it and figured if it would've been a 56 that I could've ridden all day.  By the time I'm finished riding I would like to be able to squeeze myself into a small glass box like those freaky yoga dudes.  Just kidding! That stuff is not for me, I'm claustrophobic.  I like being outside with lots of room to move, I don't know why, if  a bear gets after me I can't run.  I'll just have to stand there and fight.  Think that won't be the hardest punch I'll ever throw.  They say if you can punch a bear right in the nose that it messes up his senses and he'll leave you alone.  If you're getting attacked by a shark you're supposed to poke it in the eye.  Those are your survival tips for the day. So anyway, I like to  ride the smallest frame that i can comfortably fit on.  Pros do it.  Back to Sandy's frame before I drift too far out to sea. 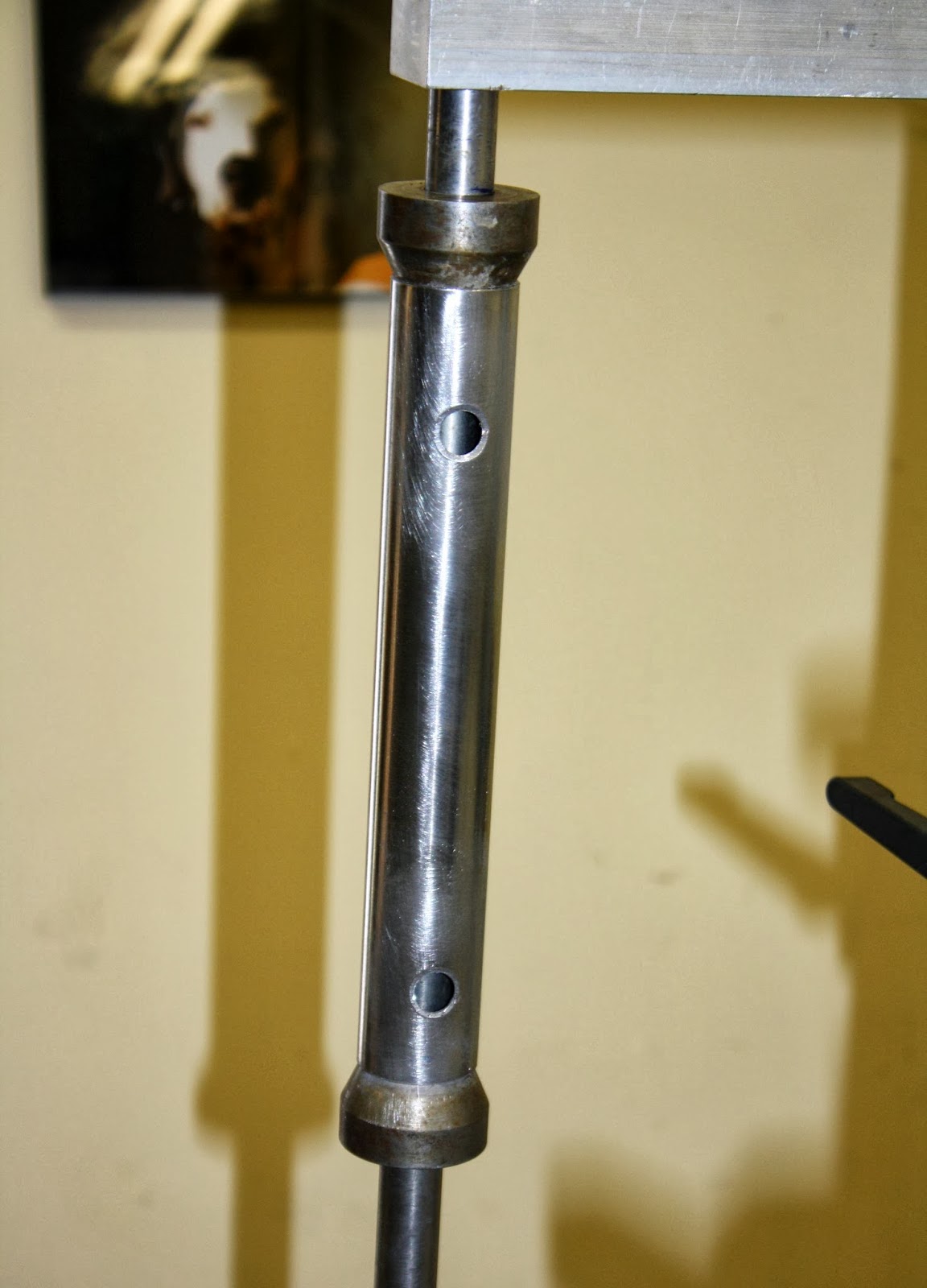 Now thats a head tube!  230 millimeters to be precise.  If you look close you can see a picture of my old buddy Mickey.  He was the Dalmation that I got just a few days after my dad passed away. 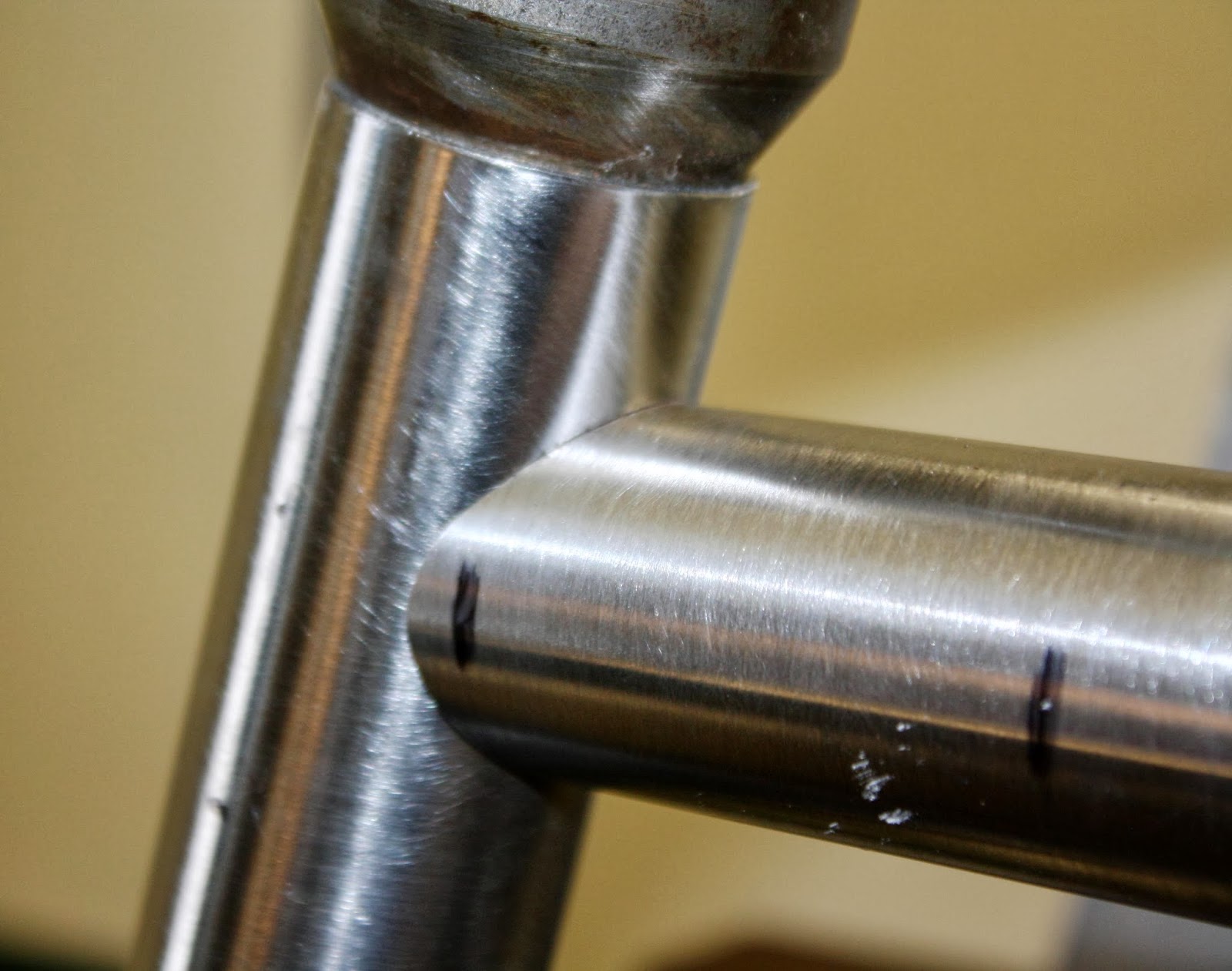 The Sharpy marks show me where the butting starts to taper down and where it ends. 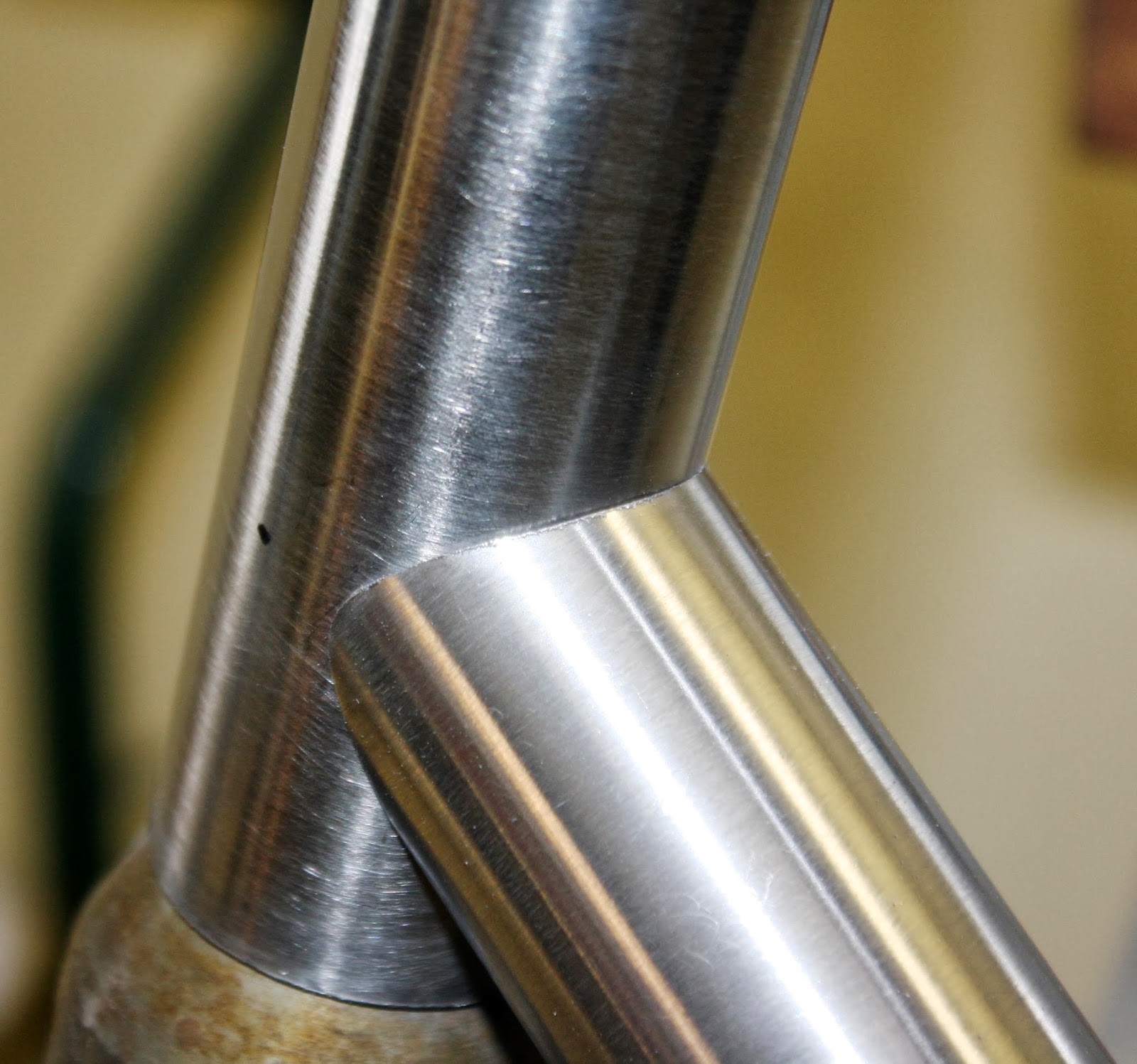 This is a nice and shiney tube however before brazing I will scuff up the end for a little extra grip for the brass to grab on to.  This down tube is a 34.9 mm OX Platinum with 8/5/8 butting and the top tube is 31.6 mm OX 7/4/7, which is what I normally use on the down tube.  This frame should be plenty stiff.  I'd like to ride it when its done but I probably won't get to, but its possible. 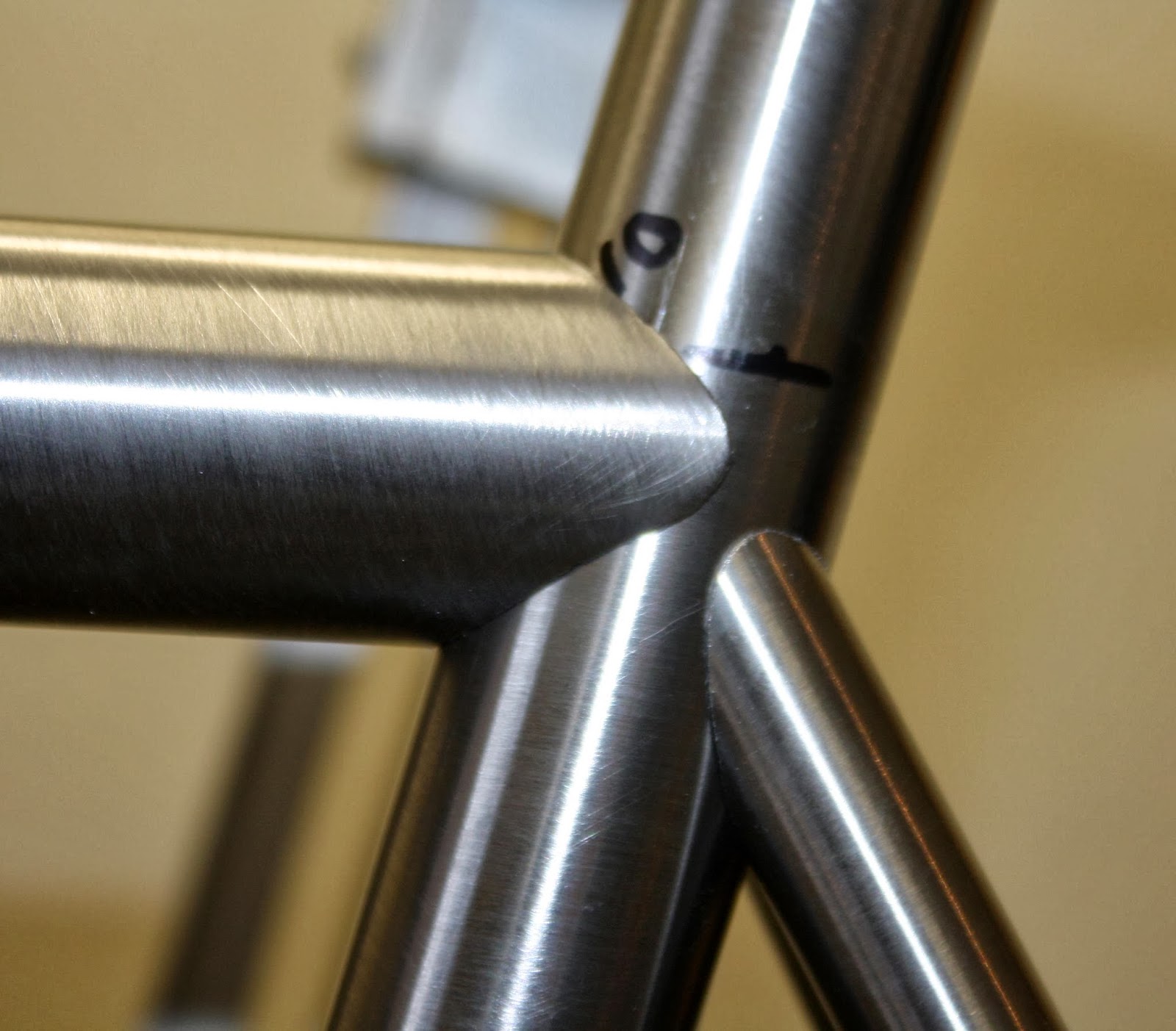 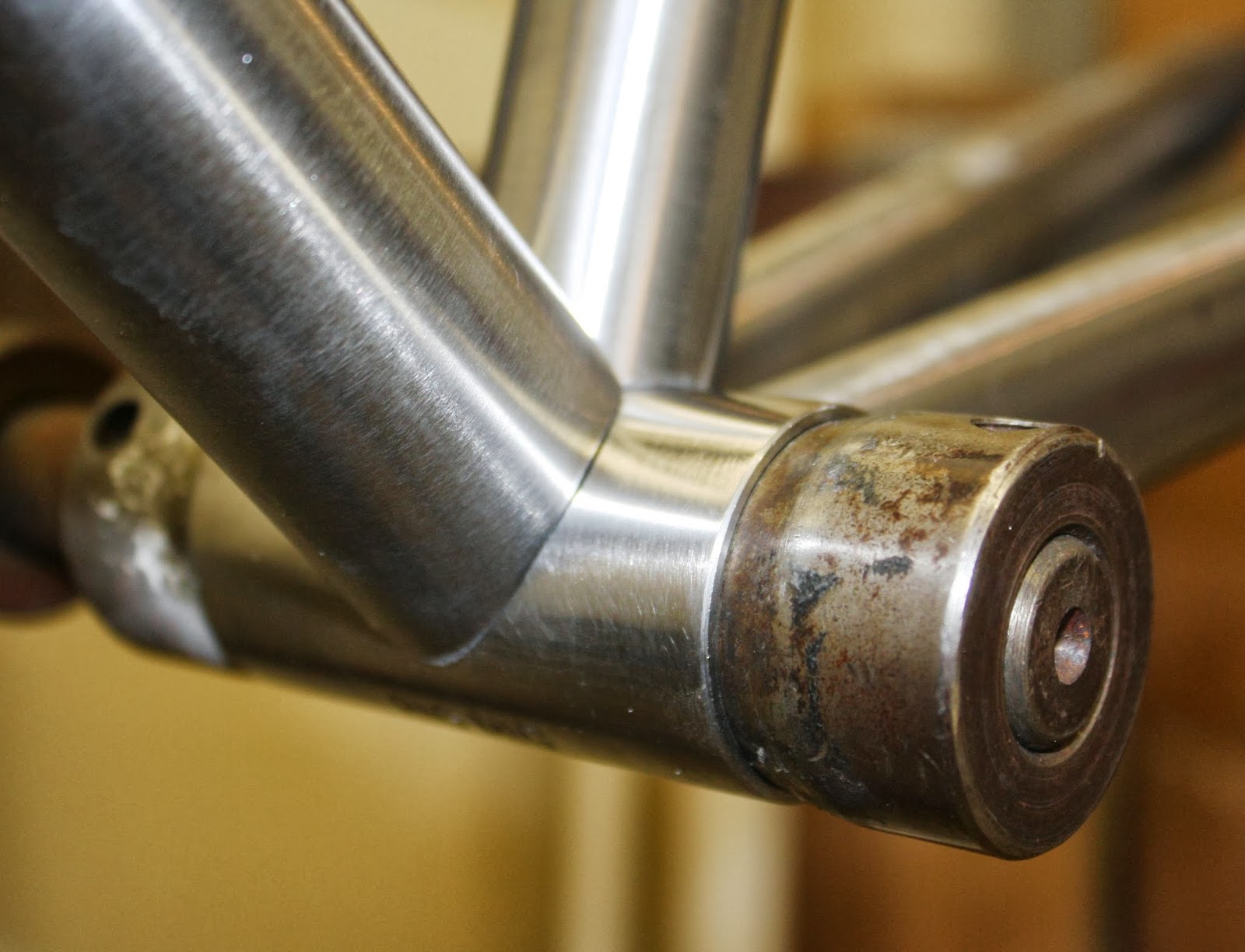 I always enjoy mitering a good solid foundation to start on. 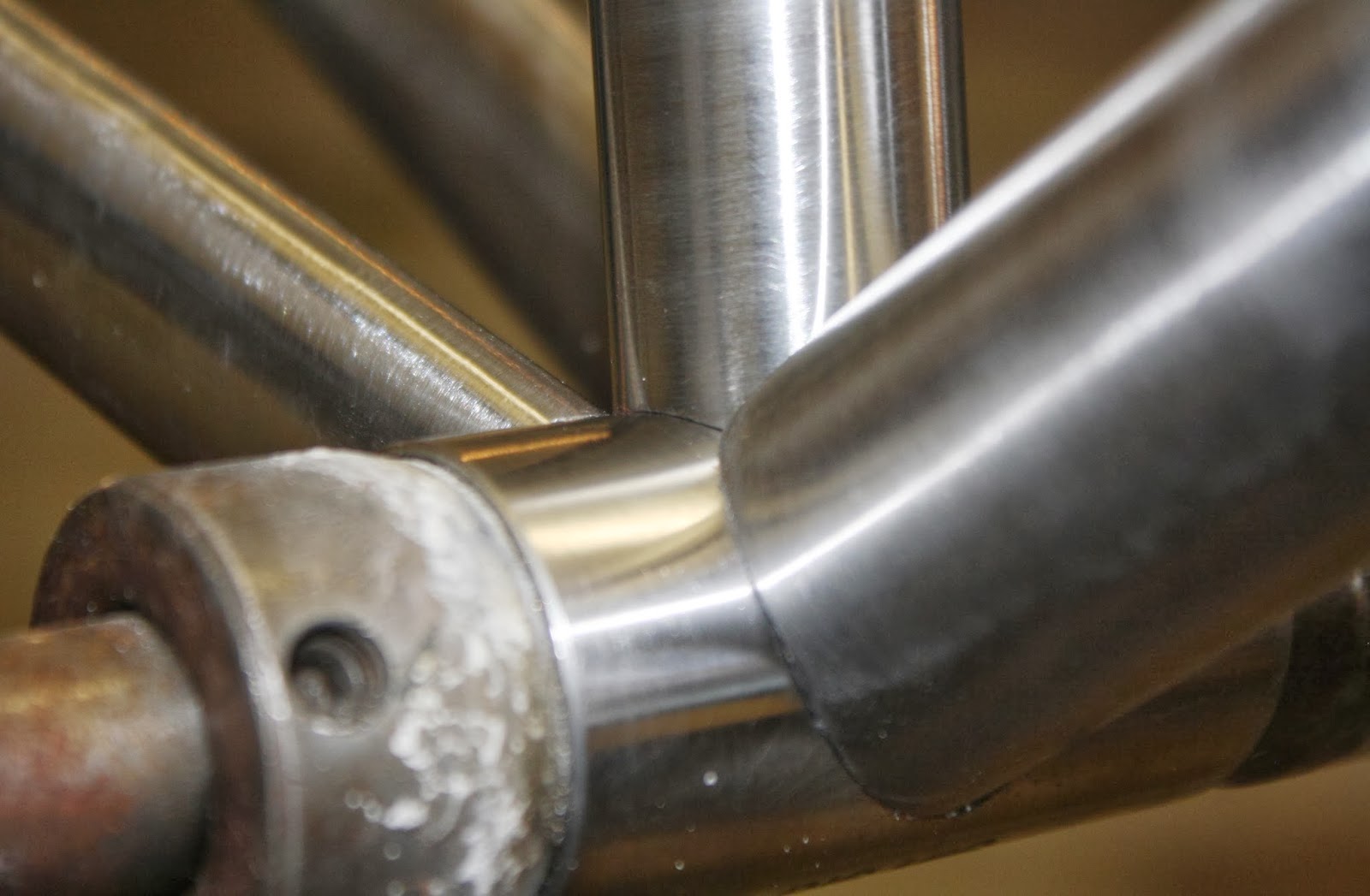 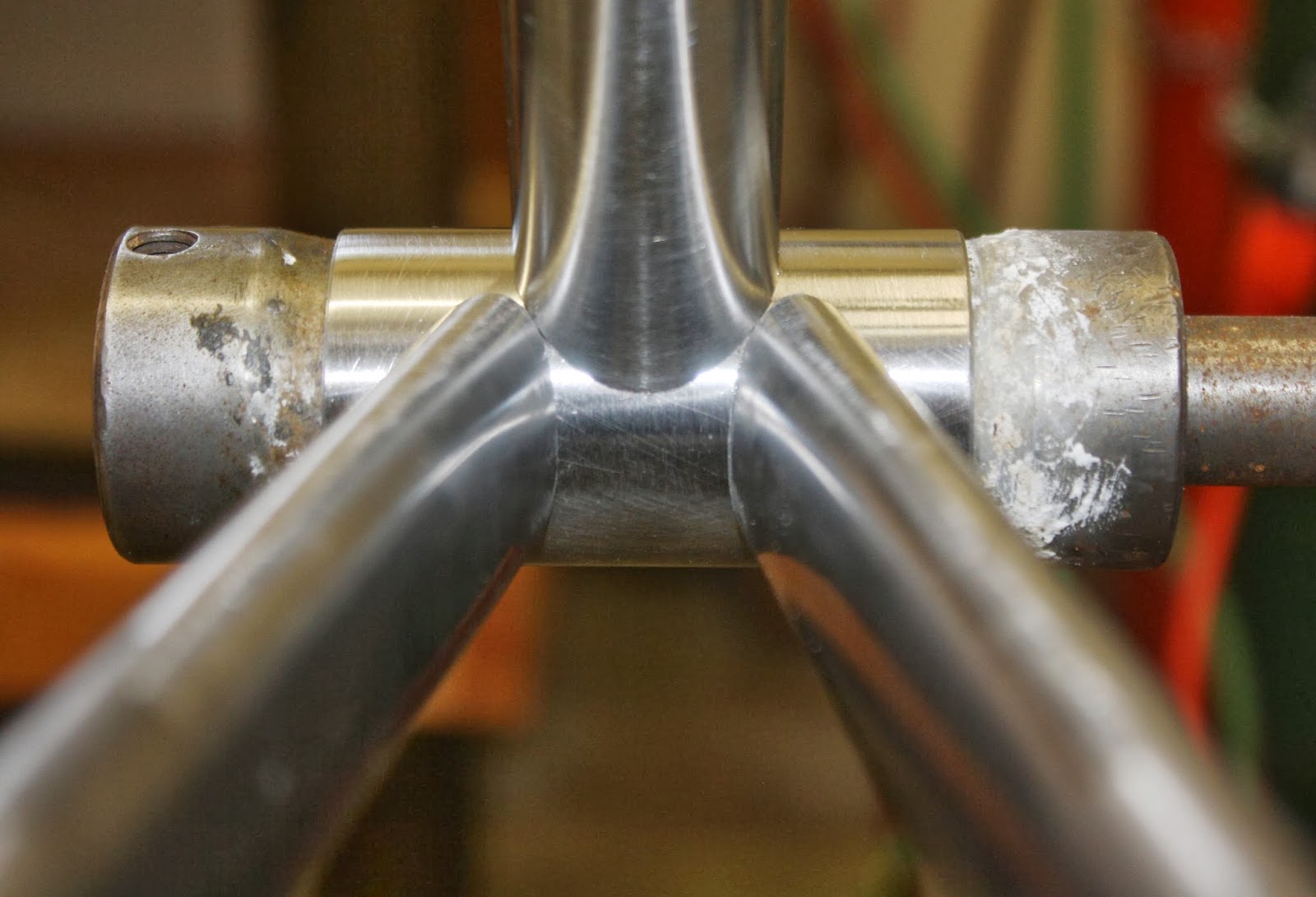 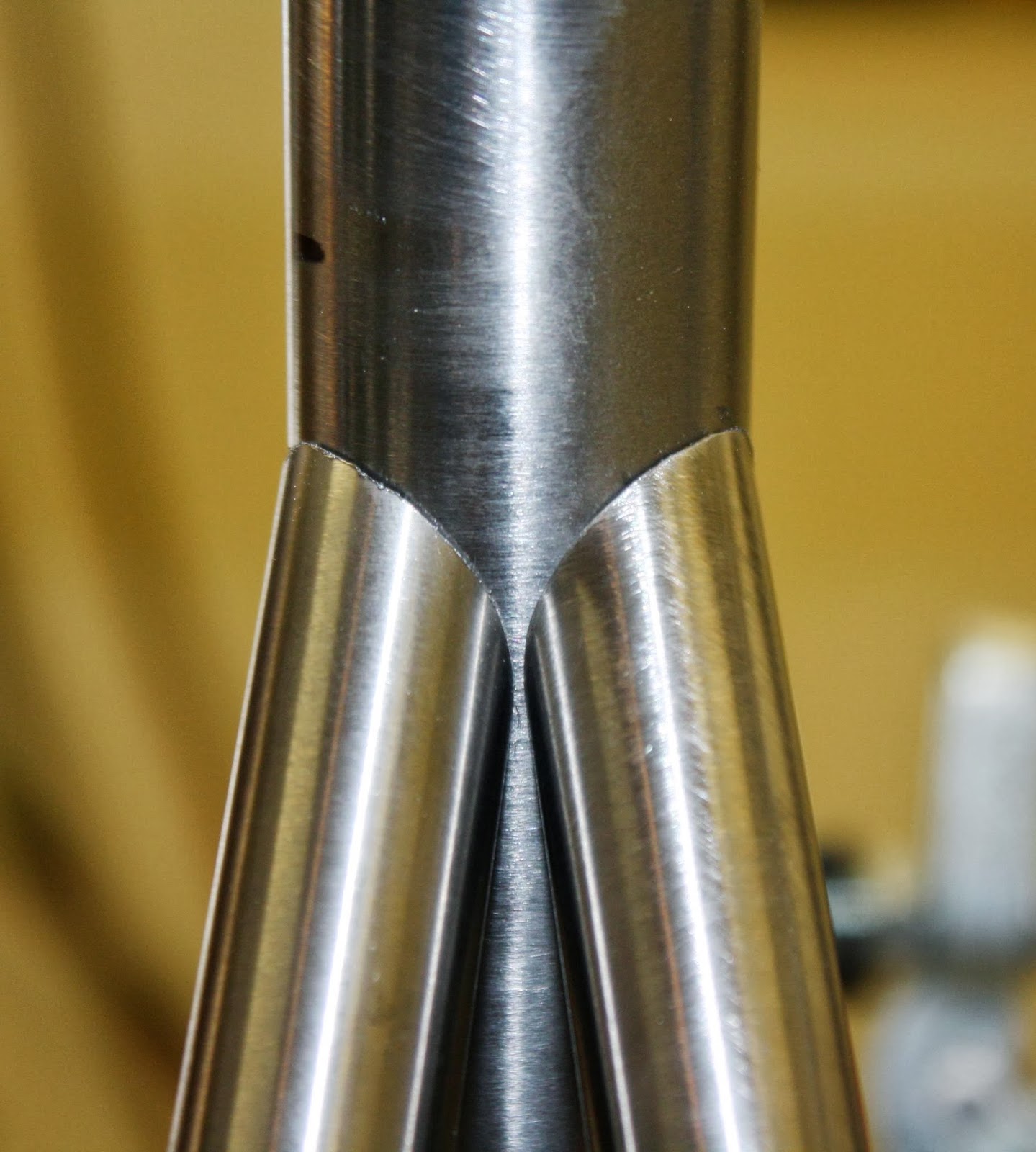 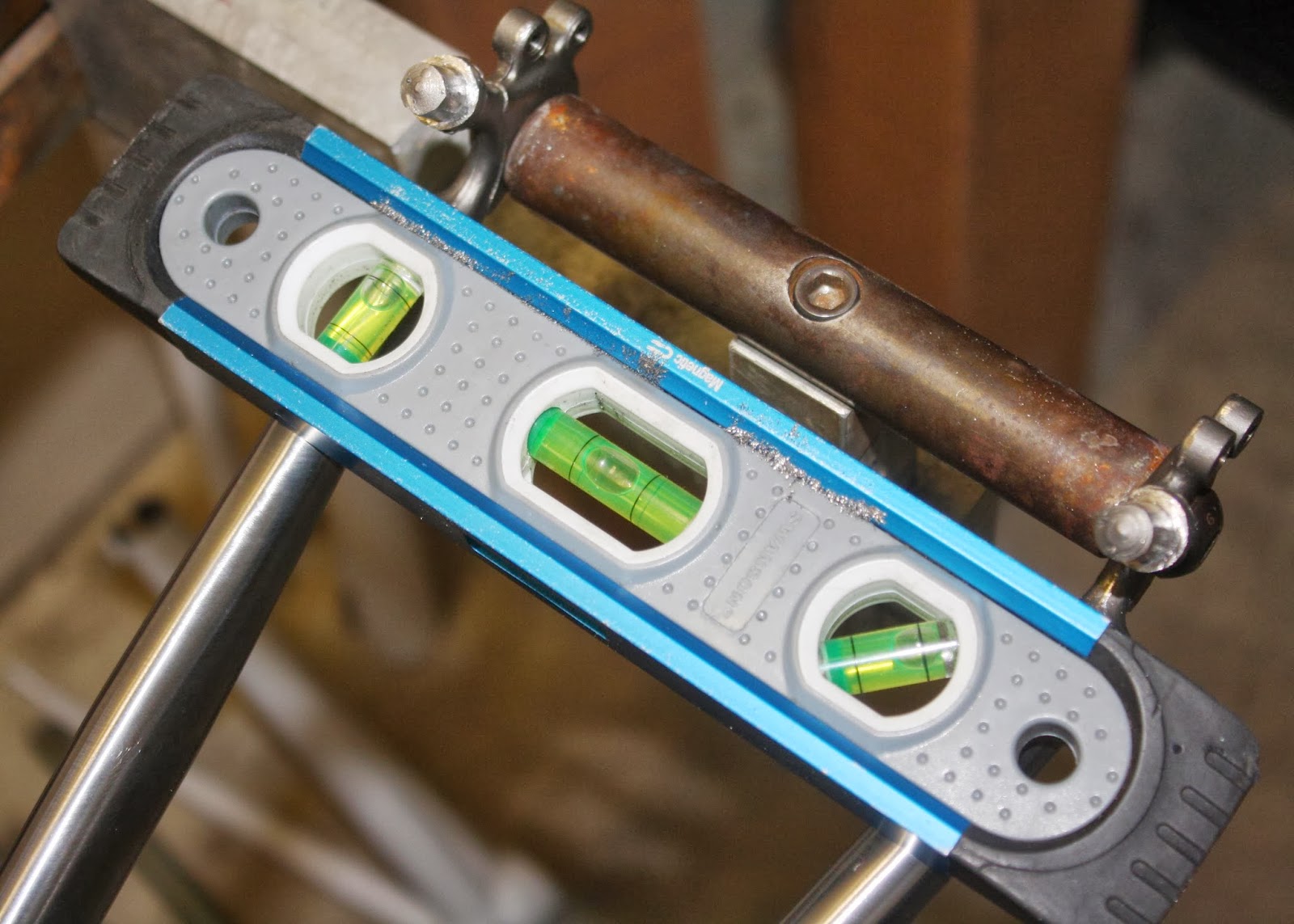 Always checking to make sure the dropouts are level, and then I also check it up near the bottom bracket area as well. 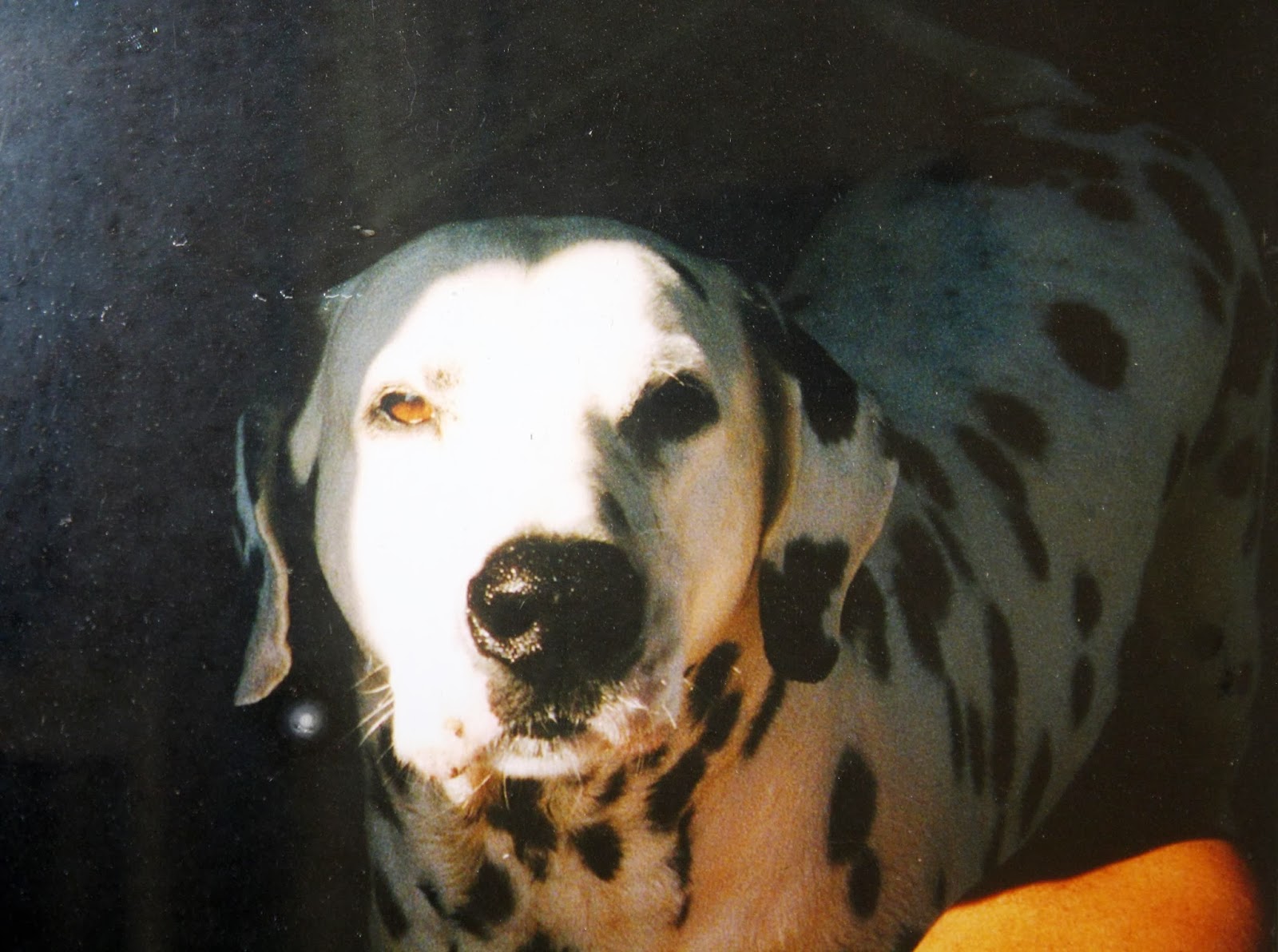 Here is a close-up of ol' Mick.  Oddly enough, this picture was taken up here at the White River about 15 years ago.  I used to bring him up here for a little weekend fishing trip once in a while.  Mick and I had 11 interesting years together. You can tell he's tired here. He had been going all day long when this picture was taken.  He loved to swim. Talk about hard to find in a snow storm. 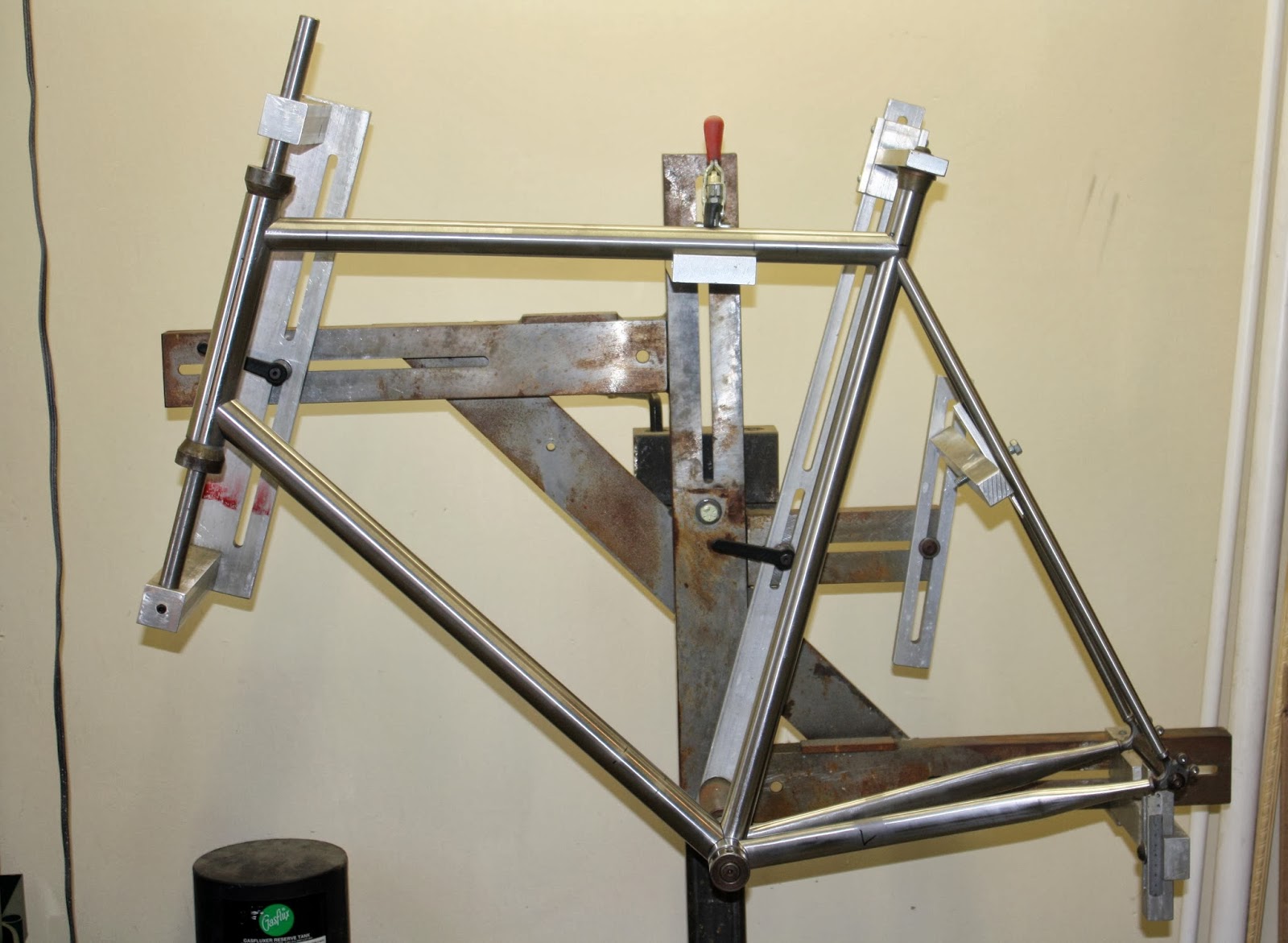 Don't even think about trying to throw your little short legs over this dude Vladamir Putin, this is for big boyz only.  I recently found out that Vladamir Putin is only 5'5" tall.  Nothing worse that a short guy with a military.  God help us! "Hey Vladamir, we all took a vote and you have to put your shirt back on."

Even though this is a big frame its gonna be tightly constructed and fairly lightweight, and it'll break down to fit into a suitcase.  "Andalucia, here I come honey!"  I'm still waiting for the couplers to show up but as soon as I have them in place I'll shoot another photo.  Thanks for stopping by.

Check this video out.  Think you can remain this calm in this situation.  Remember, when this shark chomps down on your torso, poke him in the eyes.
http://www.youtube.com/watch?v=Qi33cBE27NI