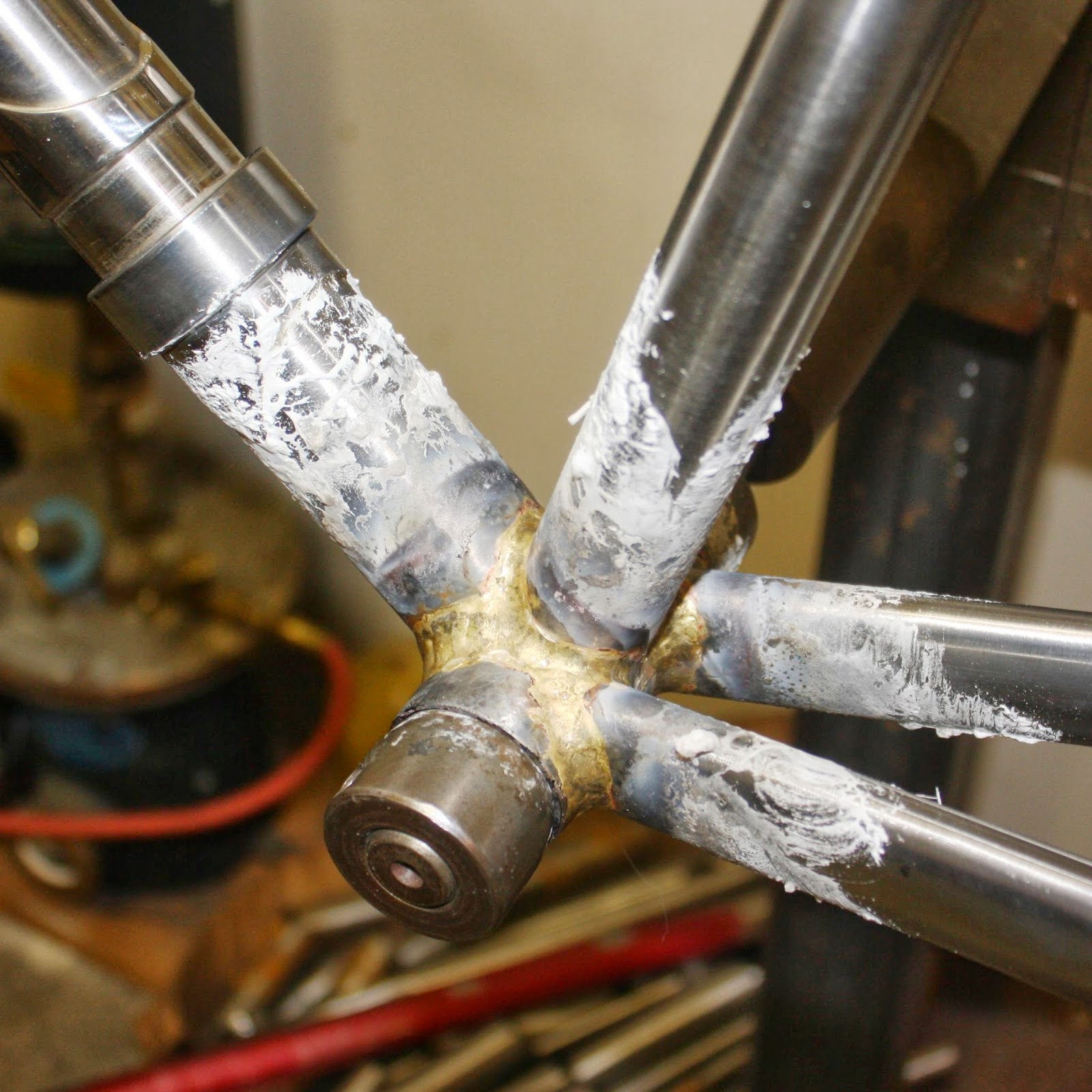 Got a few brazing shots as well as some finish work that I did the past couple of days.  Lots of my customers enjoy seeing the work that goes into their frames ( I hope), so here you go guys.  The last couple of frames I built I've been trying to really lay down some clean fillets in order to lesson the clean-up work, but regardless of how nice it is I still put in a few good hours cleaning everything up.  I'm still looking for that perfect braze, kinda like a surfer waiting to catch the perfect wave. "Yeah, whatever. Just let us check out the pictures." 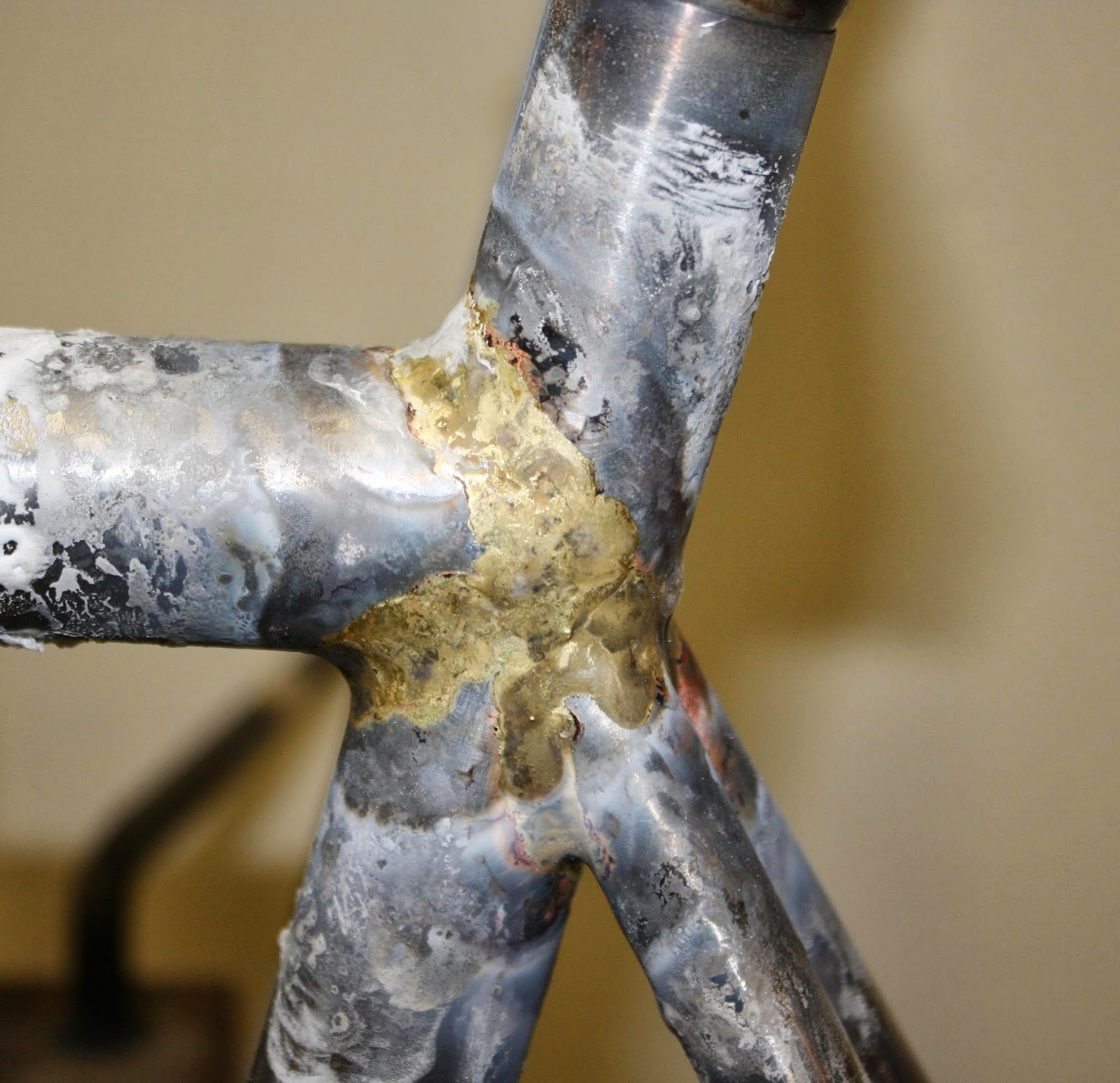 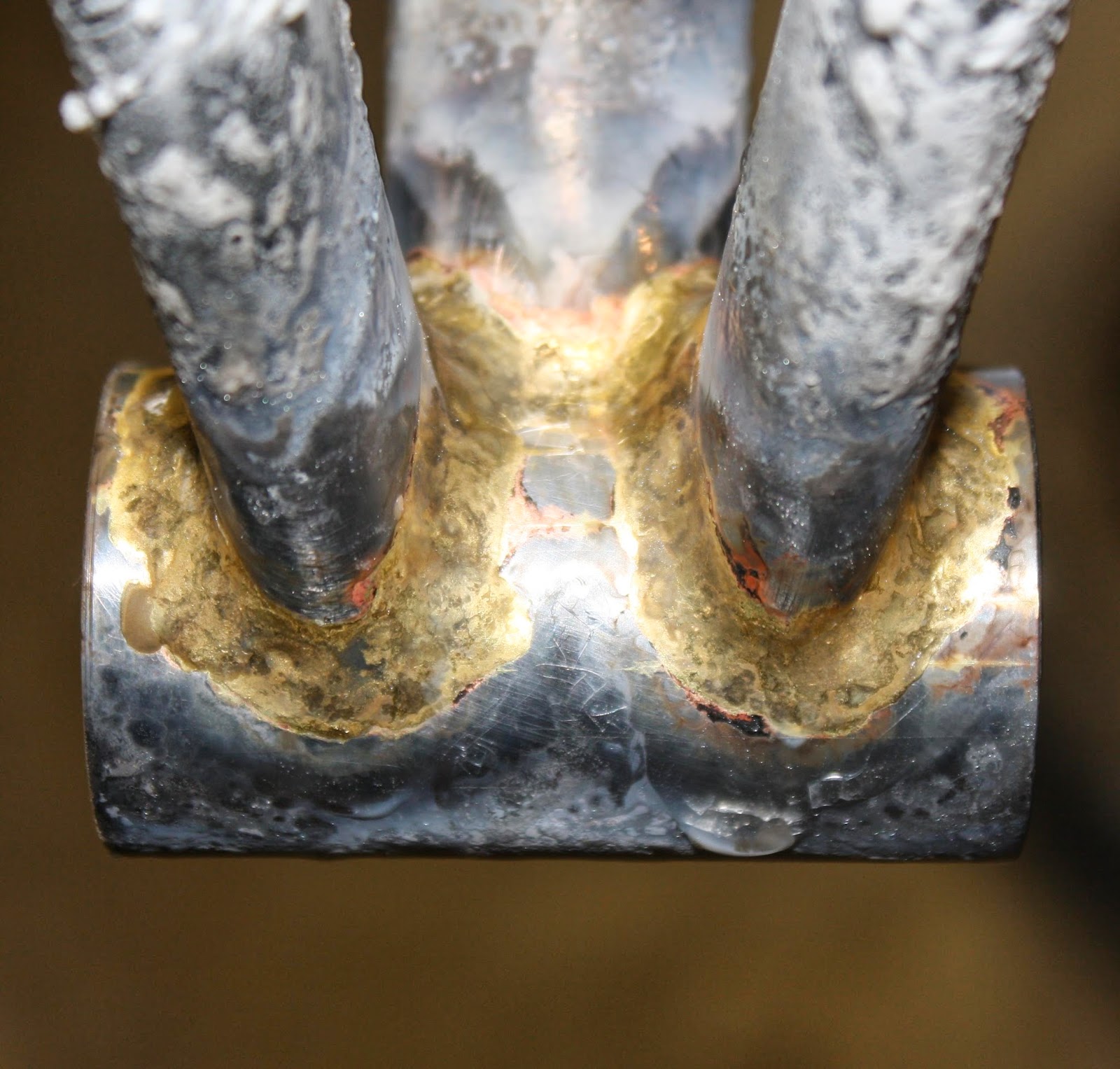 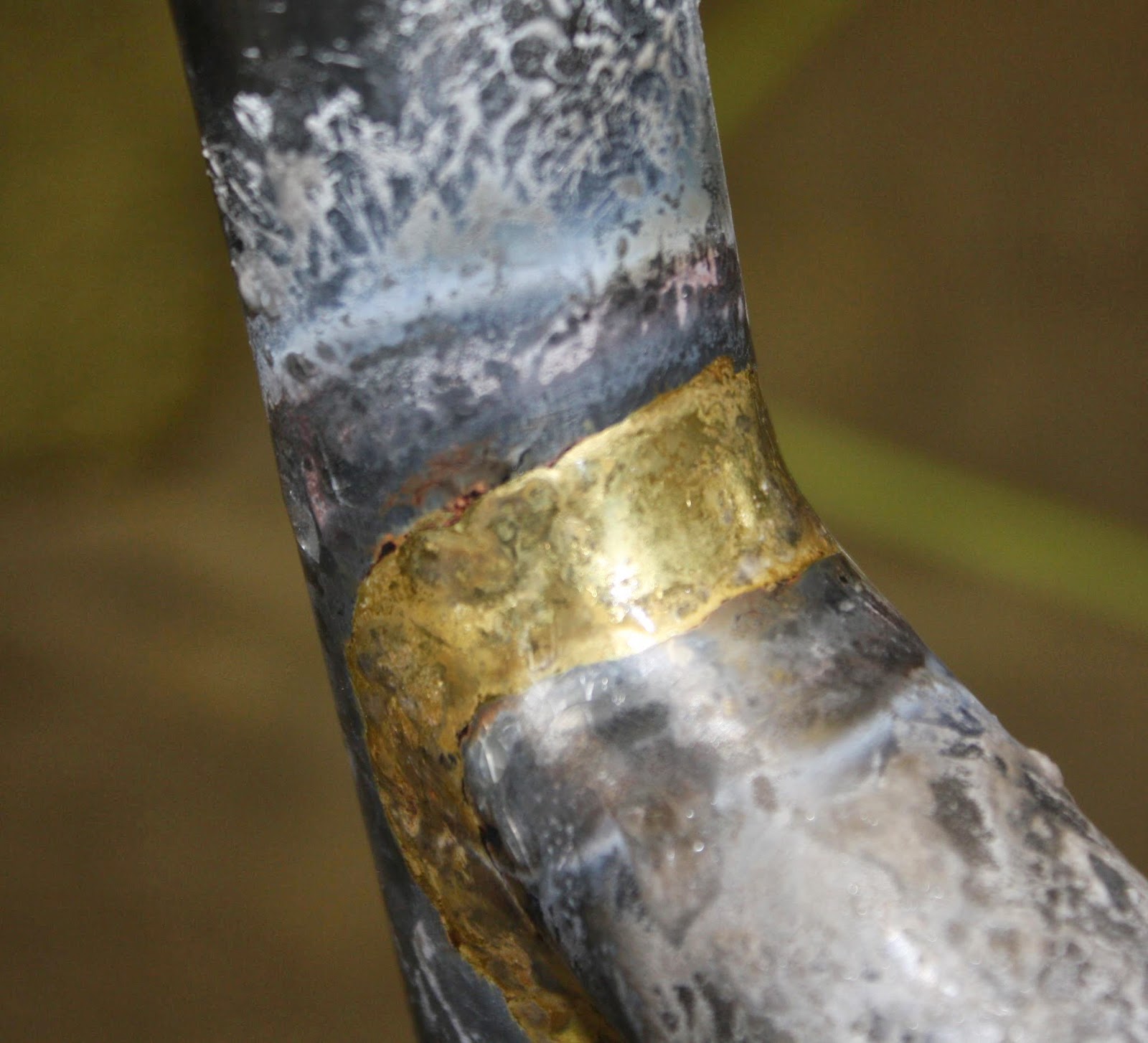 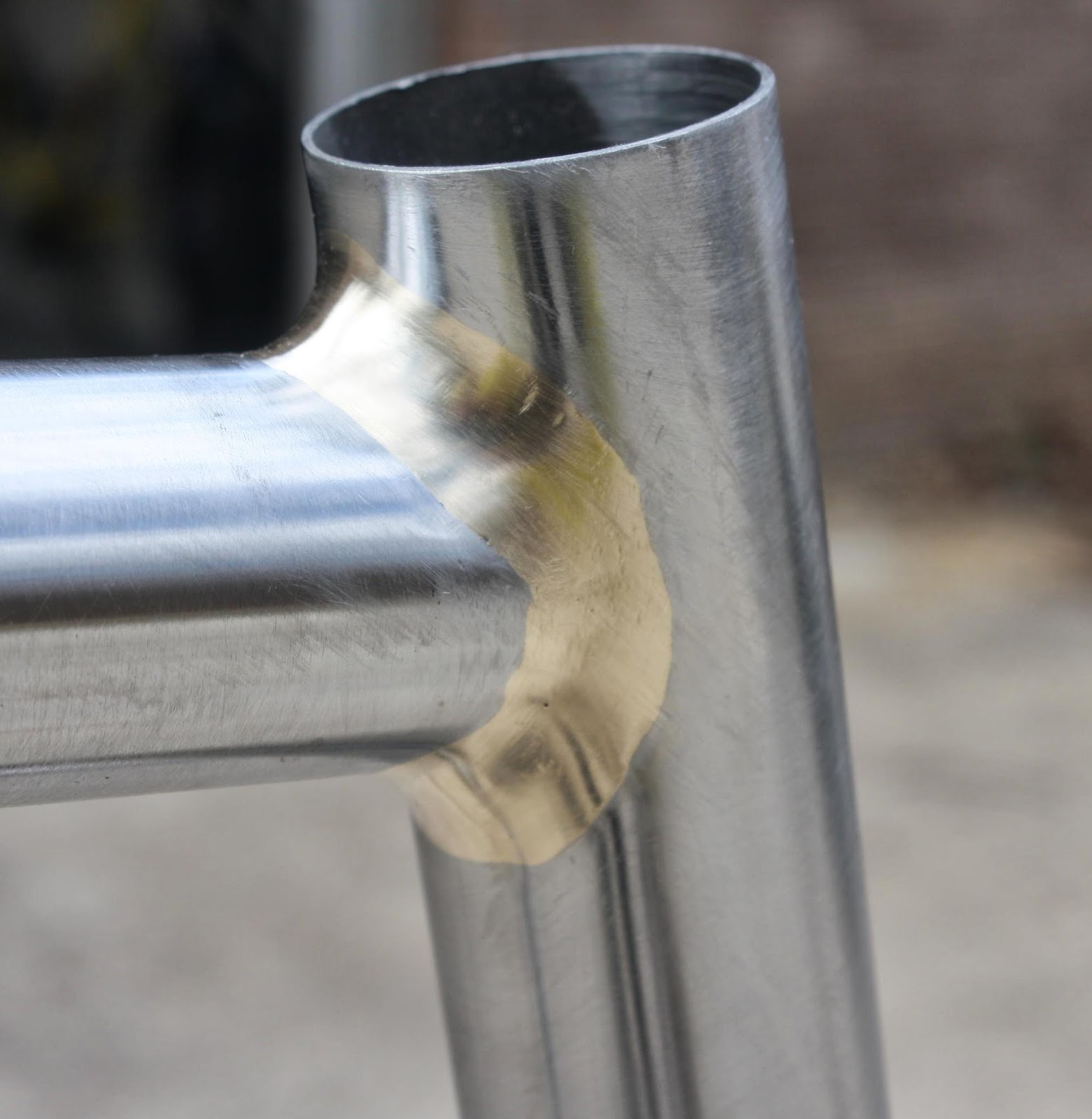 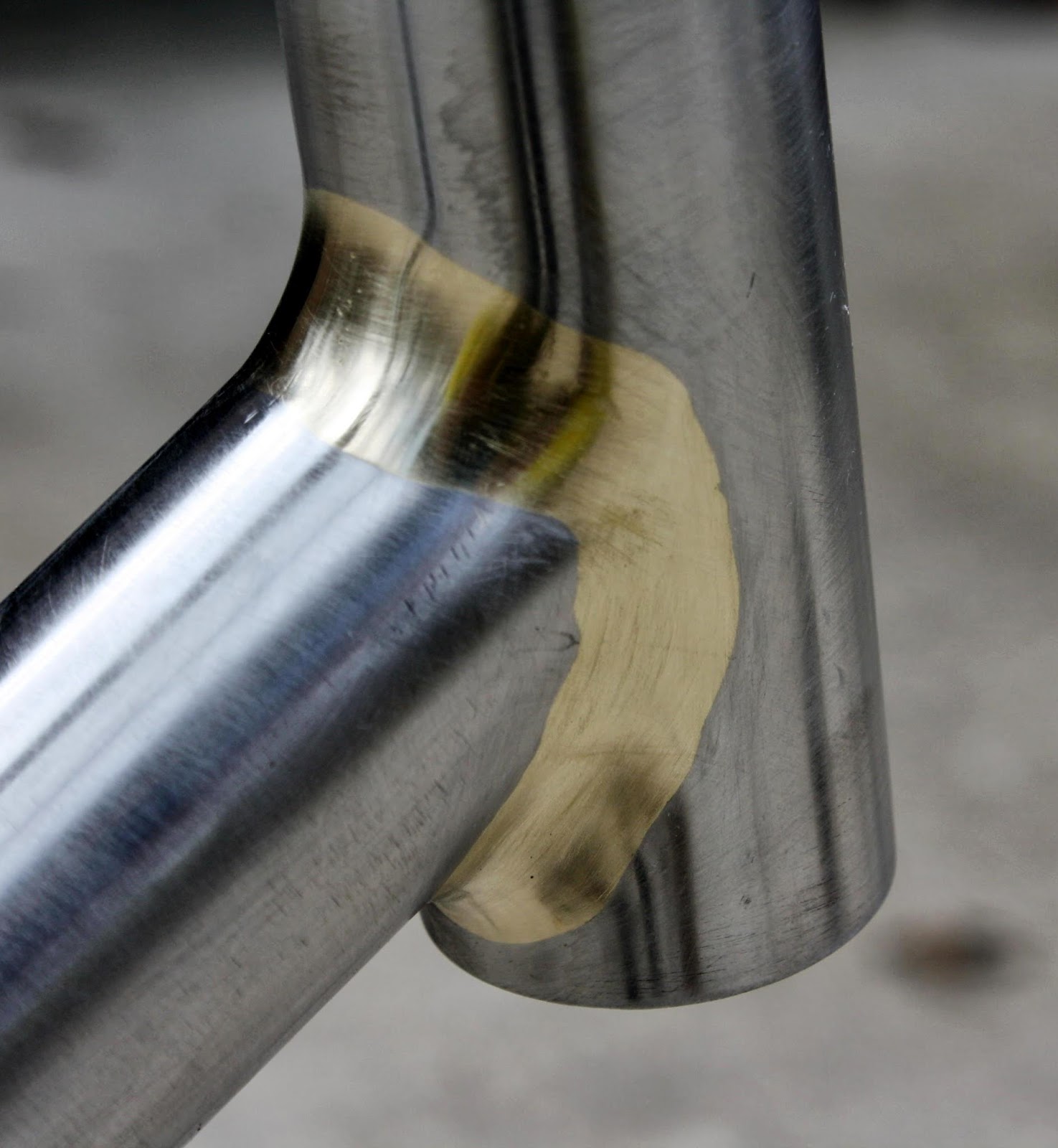 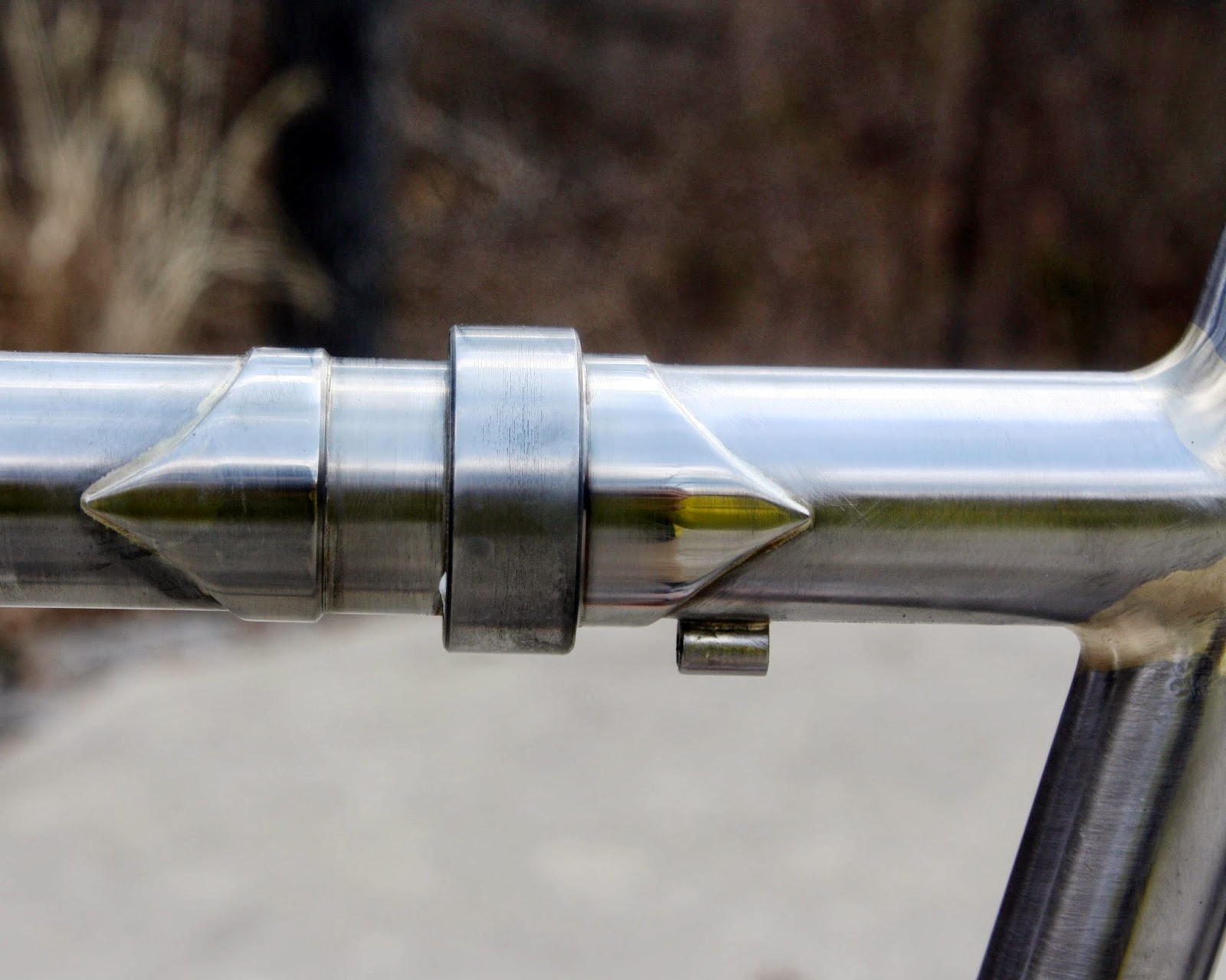 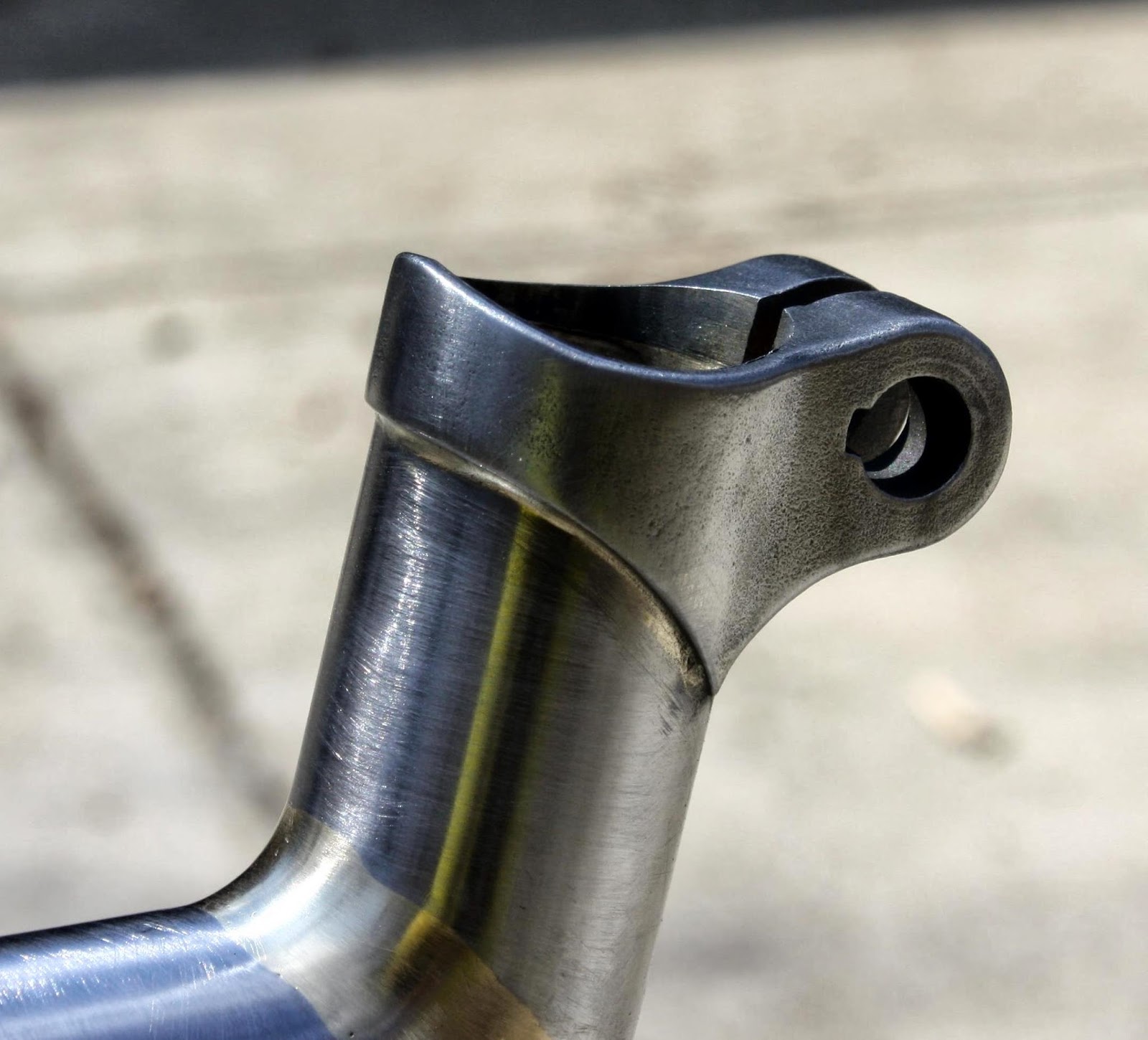 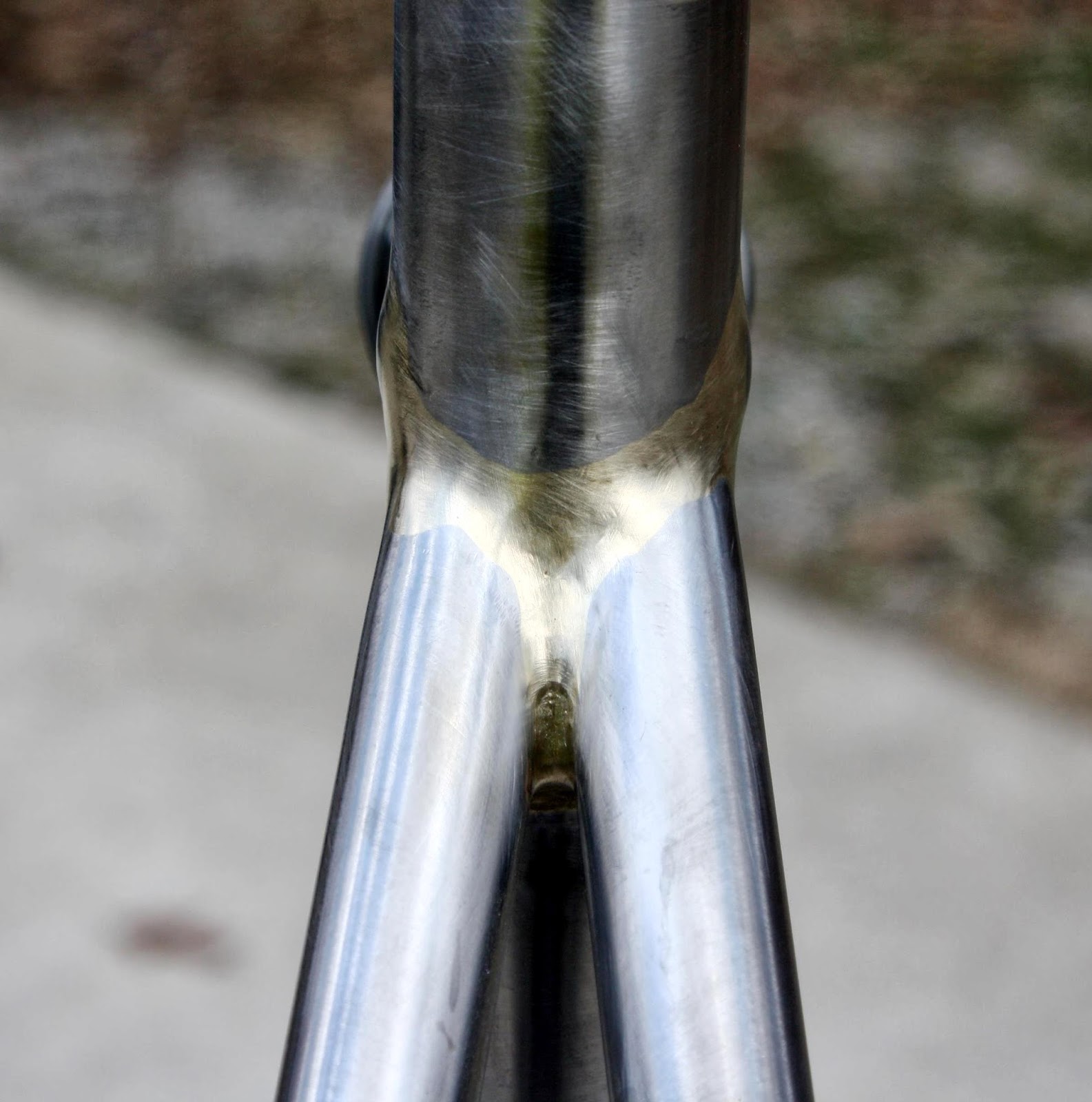 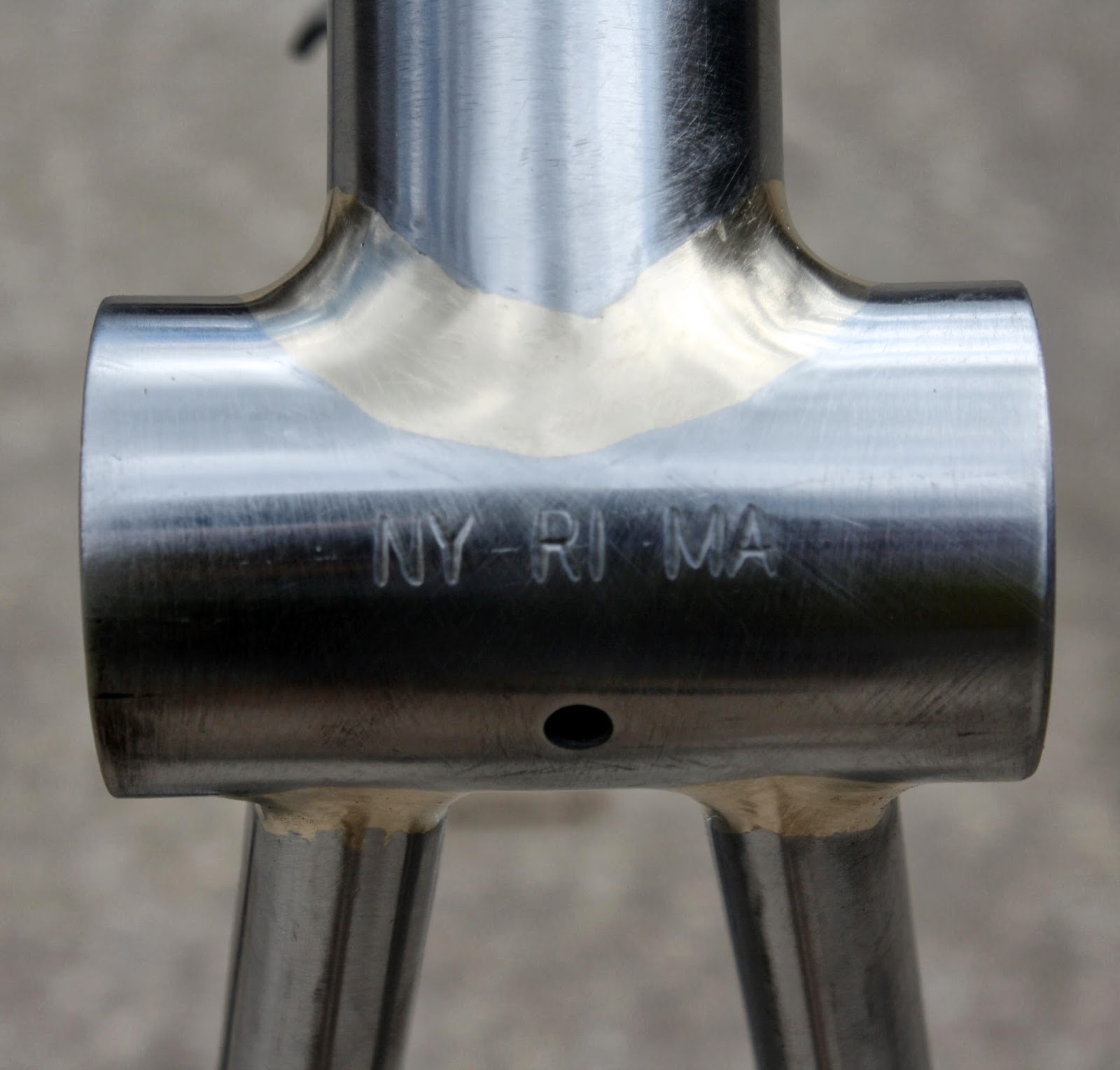 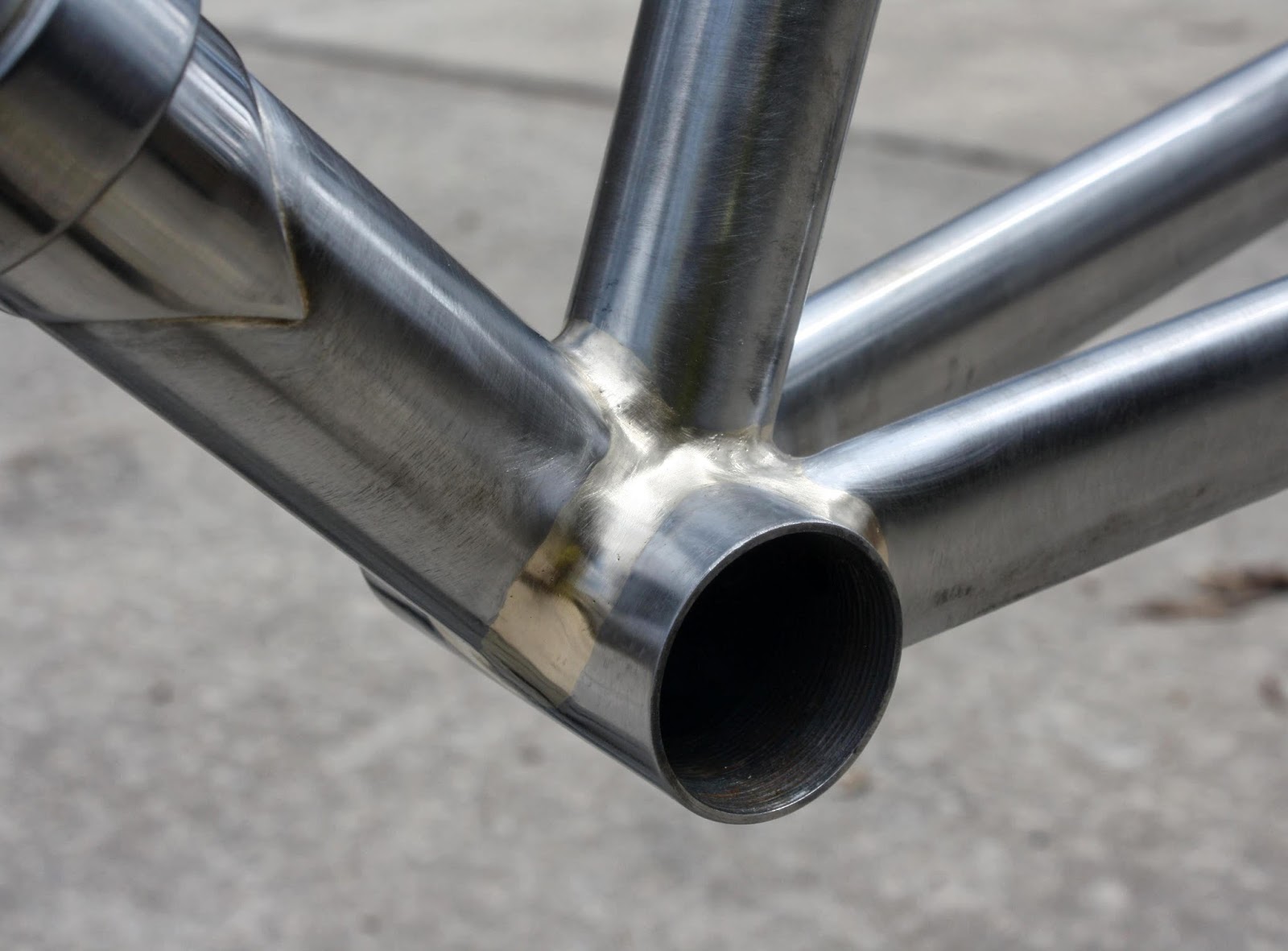 This is the first time I've used a Wound Up fork on one of my builds.  I've always wanted to however nobody ever asked for one until now.  They're beautifully made and I hesitated having to scuff it up in order to paint it. 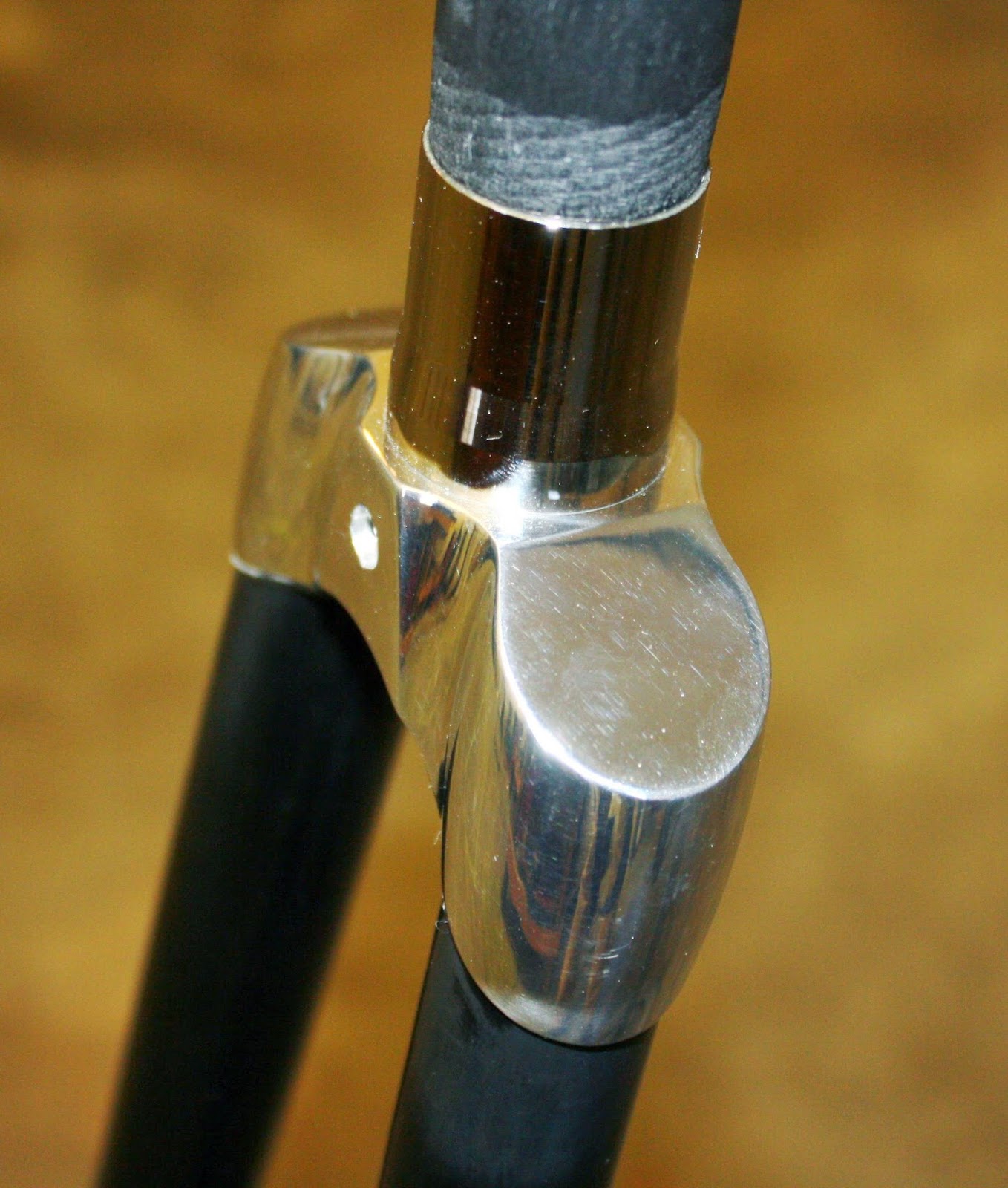 This picture doesn't even begin to show how polished these things are.  It was like bicycle art. 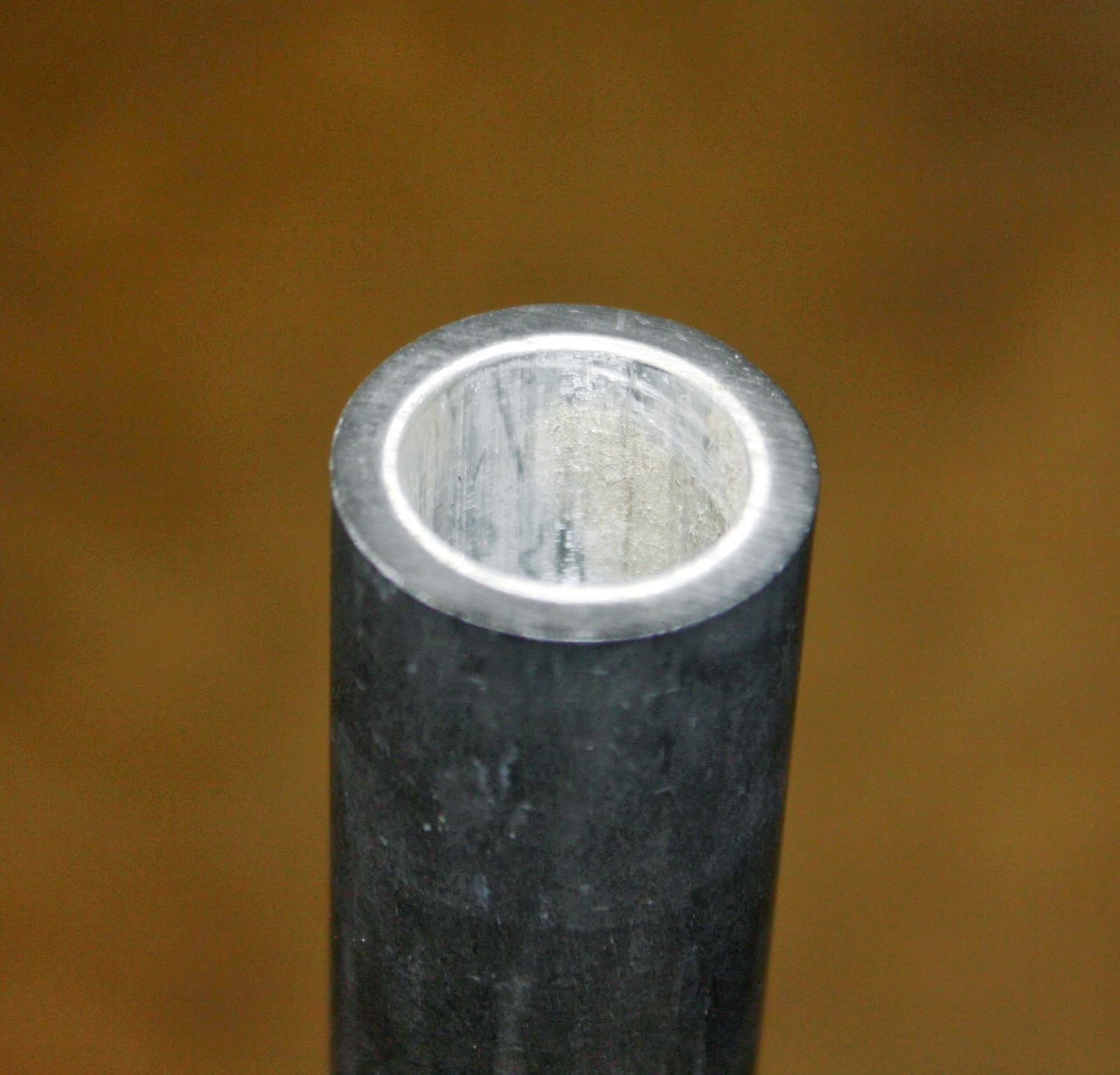 I didn't know they had an aluminum core inside the steerer tube.  They're a little heavier than your average carbon fork but a little extra stability goes a long way.  I bet it rides really predictable.  "Like steel?"  You don't know man, you might can fly. 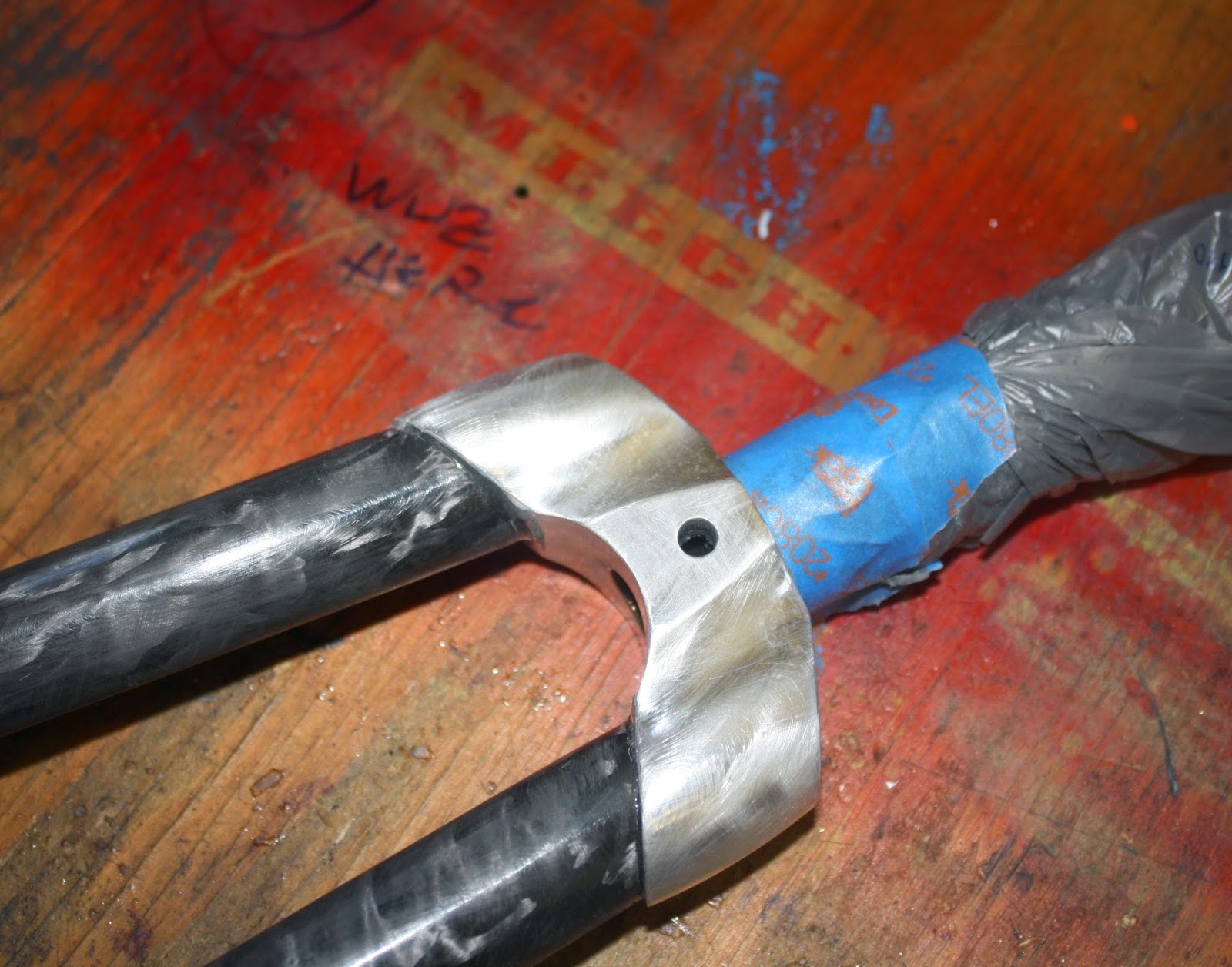 Oh well, it had to be done.  We supposedly have some warmer weather coming in this week.  Maybe I can get it painted shortly.  Did I ever tell you about my one and only surfing attempt?

I love surfing probably more than any person in Arkansas could.  Let me rephrase that. I love watching surfing more than any person in Arkansas could.  Surfing caught my eye not long after Evel Knievel did but I never had the chance to learn as there isn't much surfing going on in Arkansas. Plus, I'm scared of sharks, mainly just the Great White, even though all the others would bite your leg off quicker than you can scream, "Momma!"  Those guys that surf the big waves off the coast of San Fran or Australia definitely have my respect.  I did learn to snowboard a few years ago and thats about as close to surfing as I've gotten.  Ok, there was one time in Florida where I rented a surf board and gave it a shot.  You see, with all that surfing passion inside of me I had to try it at least once before I died, you know, a bucket list sort of thing.  So anyway there was a storm moving in and the waves were getting a little bigger than the usual 2 footers, maybe they were 3 or 4 footers. So I had my souped-up (suped up?), rented surf board with the flames painted on it under my arm and I'm walking down the beach like Keana Reeves in Point Break scoping out all those waves that I'm fixing to ride.  "Yep, I'm finally gonna  go surfing."  So I reached my destination and hung a hard right staring straight down the Gulf of Mexico's throat. "Watch this boys!"  Got me a little running start, laid the board down on the water, and jumped right off the side of it.  So I get on the board ( I'm standing in knee deep water) and start paddling out.  Breaker after breaker was knocking me off the board just as quick as i could get back on it. I couldn't even get out to where I needed to be.  I was starting to feel like I had been in a washing machine for a cycle or two but I couldn't go back to the hotel without catching one wave.  So I perservered and finally got out past the breakers and continued paddling out to where i thought I needed to be.  I was in deeper water now, not sure how deep, but there was no touching bottom.  So now I'm just sitting on the board floating trying to catch my breath
after just exhausting myself to get out there.  The waves are raising me up and down, over and over until I was basically getting sea sick.  There was no gas left in my tank at this point but I wanted to make one attempt at catching a wave, afterall, me and the waves were going the same direction.  So here comes the perfect wave, ok, it was just some random wave like all the rest, but it was the one. Now I don't remember exactly what happened but I fell off the board while I was still paddling, only now I'm in deep water, tired, and i can't get back on the board.  A couple of waves gave me a big salty drink and a brief moment of panic set in. I remember thinking, "Oh geez, am I actually gonna drown out here? Really?  In
Fort Walton Beach?"  Someone had actually drowned the day we arrived.  Peaceful thought huh? So I clung to the surf board with the little bit of energy I had left (more like desperation), got a couple of breaths in me, and managed my way back to the beach.  It was a long, blurry walk back to the hotel with my tail tucked between my legs. I didn't feel like Keanu any more. I drove straight to the surf shop, handed them their board, and told them thanks. The guy said, "You didn't surf very long." And of course I replied, "Yeah I know man, I'm just not that into it right now." 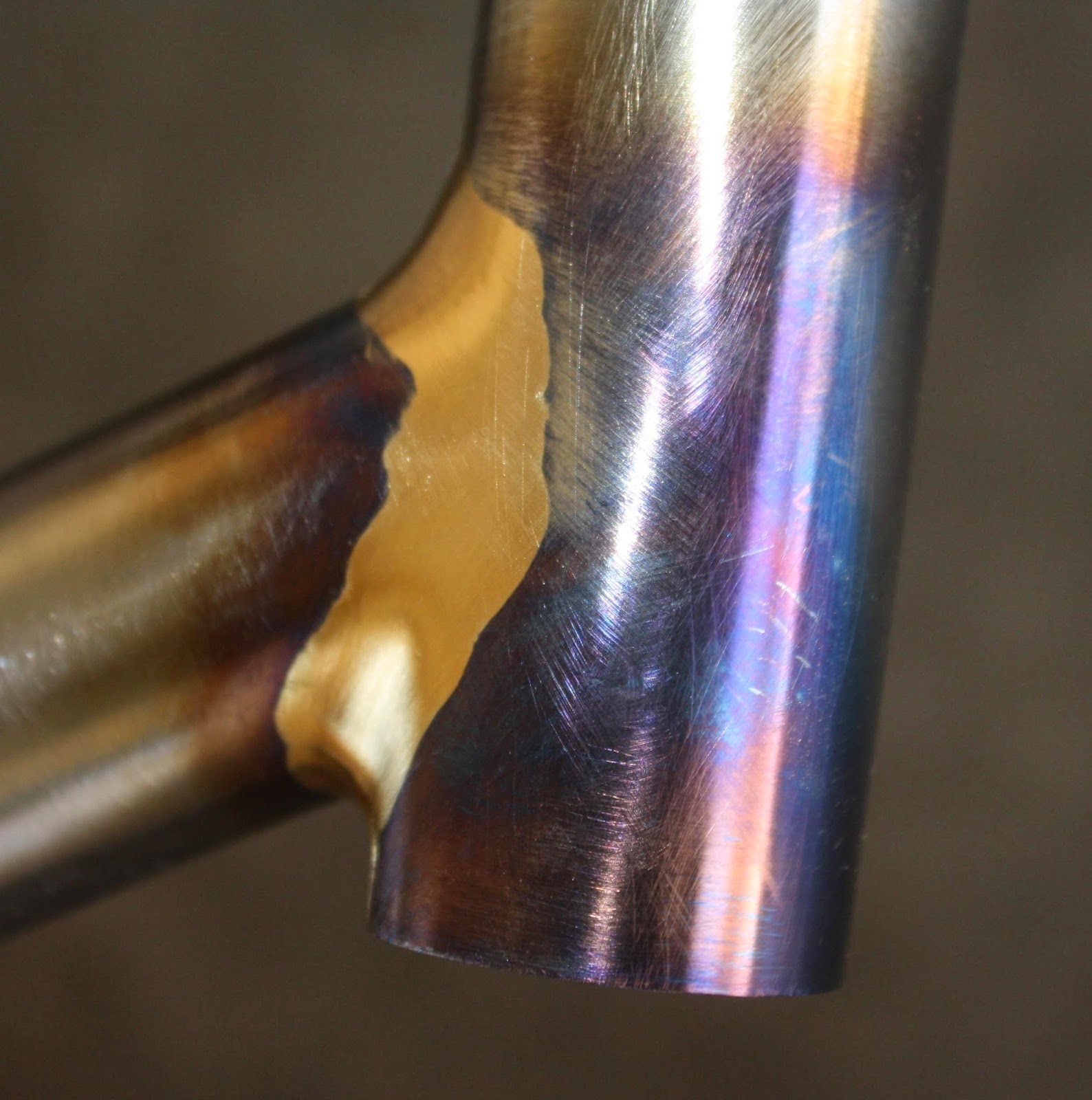