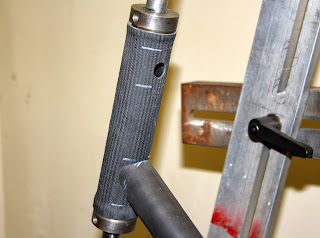 I'm making progress on the carbon build albeit slow but sure.  Everything is cut and fit and basically ready to tack however I recently decided to make this a Di2 compatible frame because I've had a little interest from customers in the past and I thought it was about time to become a little familiar with it.  Truthfully electronic shifting has never interested me.  I am all certain that its dialed in and thats its probably more precise than the mechanical shifting but I'm fine with my Campy cable shifting.  Its bulletproof, easy to fix should something happen, and I don't ever have to worry about a dead battery.  I do believe that you can get quite a few shifts in before having to recharge but its just one less thing I have to worry about keeping up.  When I get ready to go ride the last thing I want to find out is that the battery on my bicycle is dead, thats a car owner's problem, but since I'm in the business of building bicycle frames for people the way that they want them, I want to be able to offer it to them.  I think I'm gonna build this frame to accommodate cable shifting as well because my main concern is getting the frames solid and looking good and I need to be able to ride it in order to be confident in it.  The hardest part about making this frame Di2 compatible is that I don't have the groupset in hand and I'm trying to figure everything out without being able to check it.  "Hey Dimitri, I've got an idea.  Why don't you go buy the groupset and then you can build the frame around it?"  Thats a fair enough question and its crossed my mind more than once but I really don't feel like spending upwards of $2000 on a group that I don't even want.  I've got better things to spend that money on.  Lets see, I need a new heater (its on the way), I need some new wheels (I've never needed new wheels this bad before), and I want/need a mill drill.  Two grand won't cover all that but it'll get alot of it, and its all for a better frame building environment.  Don't get me wrong, I would love to wake up in the morning and go grab my bike for a ride and have a brand new Campy Super Record EPS setup to test out just for kicks but its not gonna happen right now.  Thats when it would be nice to be a pro bike rider. Just show up in Mallorca, Spain for training camp and they hand you a state of the art bike to go thrash around on.  I'd bring it back in 6 pieces and say, "Nope, get me another, and I'll take a cappucino and a box of Little Debbie Swiss Cake Rolls while you're at it, and the box better not be opened this time you cunt."  Just kidding.  Thats my Bradley Wiggins immitation. He cracks me up. Whats a bloke? What was i talking about?  Who cares?  I wouldn't waste my time reading this crap, I would just be looking at the pictures, like a swanky magazine. I hope my mother doesn't read this blog. She doesn't, she doesn't own a computer.  A few months ago she bought an i-Pad with a 30-day free trial and was gonna try to get up to speed with the rest of the world.  She had that thing so screwed that it made me feel like a genius.  The computer guys didn't even know what she did to it.  After my mother started fiddling with that iPad the stock market went down over 700 points.  That whole deal with Syria that looked to be getting out of control, my mother and that iPad are responsible.  You know that remote control space car that recently crashed on Mars, yep, my mother.  She did manage to get some insurance through Obamacare, but I don't think she was trying to.  Thats just a joke, not politically motivated in any way.  I'm telling you man, my whole family is dangerous with electronics.  My dad invented and pattened two products, started his own companies, built houses, and accomplished many other things in life to be respected however he had to call a friend in order to get our VCR hooked up.  Electronics are like Satan to the Harris family.  I just got an iPhone the other day and now I'm having trouble with my rear derailleur not shifting properly.  My mother took the iPad back to the store and it was like 3 weeks after the  30-day free trial and they still gave her money back.  Guess they figured they would be helping the whole world. The day after, stocks jumped 200 points and that whole Syria thing dissolved like an Alka-Seltzer.  I'm not sure what happened to that $8 million dollar remote control car on Mars, that project was doomed from the beginning.  I imagine that the Martian people are playing hockey with it. Lets see, the moon is a bunch of white dust and Mars is a bunch of red dust.  Money well spent NASA. Where am I? Oh yeah, Di2 setup and better frame building environment.  Probably what i'll end up doing is just getting the wiring setup and junction boxes needed and use that to mock up the frame.  Its also important to say that I've talked to several friends and bike shops that have been extremely helpful in helping me get this dialed in.  "I get by with a little help from my friends....".  Thanks guys! 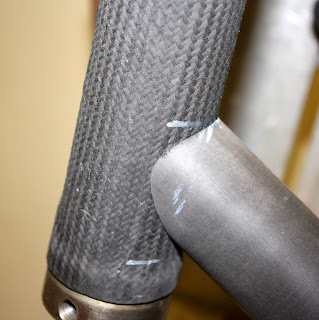 This is my semi-custom head tube that I made.  You saw it in an earlier post.  I'm still waiting on my tapered mandrel to get finished.  My buddy, Bob the machinist, has had bronchitis and the doctor told him to take it easy for a few days.  While I'm really anxious to get the mandrel and test it out Bob's health is a much more important issue so I'll just sit tight. 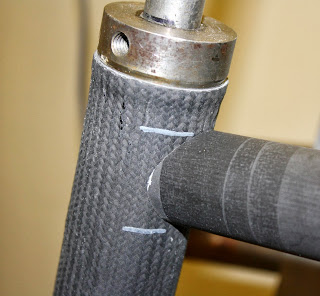 These are clearly just tube miters and really no different than the steel tube miters but I take a lot of pride in getting things as tight as possible. 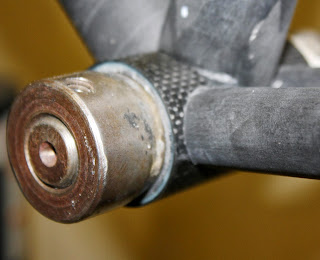 This photo is so blurry I shouldn't have used it. 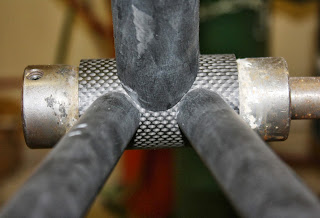 I'm trying to build my own rear stays to test out so that I'm not just purchasing the same rear end as everyone else.  These chainstays came from Rock West Composites and while they're ok I'm not totally stoked about them.  They seem strong enough and they are tapered but the totally round thing isn't leaving much space for tires or chainring clearance. If I'm lucky enough to pull off making a good head tube then my next adventure will be to have some type of mandrel made for chainstays, we'll see, I may be dreaming but thats what I do best.  While I'm dreaming I might as well dream for a rectangle chainstay that tapers down to a round connection at the dropouts.  Will that work?  I'm thinking yes so long as the round part is smaller than the rectangle.  It should come out, why wouldn't it? 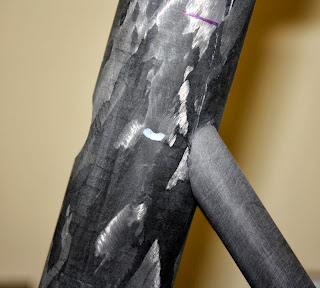 These seatstays are just a straight O.D. without a taper but I like them.  They're skinny and remind me a little of the seat stays that I've seen on some Cervelos and Cannondales.  Apparently beefy chainstays and skinny seatstays is the way to go.  Is chainstay/seatstay one word or two?  I know that I've spelled it both ways, I'm going with one from now on until I learn otherwise. 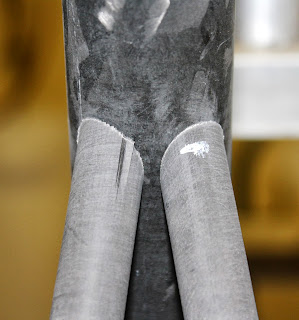 You can see that a little fray occurred here from cutting this tube and uni-directional is notorious for that.  I have even been wrapping the ends with masking tape and it sometimes still frays.  Its not much and it will all be covered in epoxy and carbon so no worries but I'm not a big fan of uni, I don't care what they say about the stiffness.  I like the woven tubes and this seat tube seems especially nice, very user friendly and it seems just as stiff, besides, I don't feel that a little compliance is a bad thing in a bike frame.  I think everyone is blowing that whole stiffness thing out of proportion.  Granted, I don't want to ride a wet noodle but i don't care to bounce around on a jackhammer like Wile E. Coyote either. This juncture here is gonna need a nice sized epoxy fillet built up. 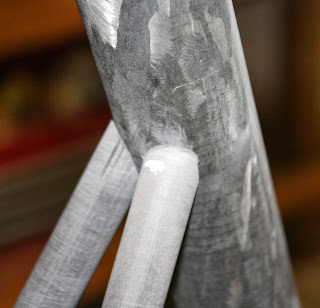 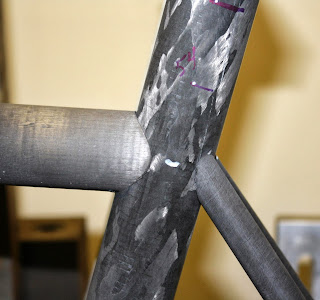 This is my favorite photo in quite some time.  Everything is as tight and in place as it should be.  I think I just like the seat tube. 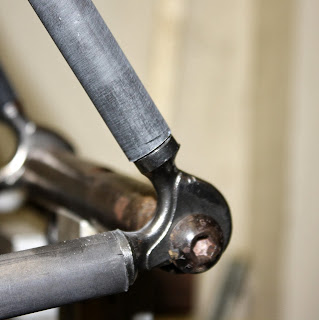 I'm probably the first builder to use Henry James dropouts on a custom carbon frame.  What can I say?  They were in the toolbox and they seemed to fit the bill.  I'm not too concerned about the dropout situation on this frame as I'll get that worked out in time.  These are stainless and a bit heavy however I like the fact that they are not overly large and I'm not sure that they're any heavier than the dropout setup shown below on this Dedacciai rear end.  When you take the weight of the dropouts and the plugs that are bonded into the stays I can't imagine there is much of a  difference.  We'll work on this in the future.  The O.D. of the tubes was a bit larger than the dropouts but not enough to worry about. 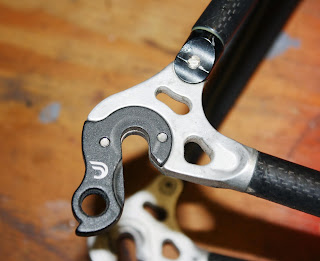 Replaceable dropouts are a definite plus though.  I'm fixing to go visit Paragon's website. 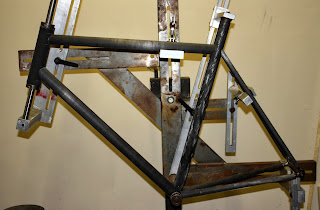 Hard to believe this is a 58, actually a 57.5 cm frame.  This is built roughly off the same geometry as my old Scott CR1.  It was a good race bike but a bit on the stiff side for everyday riding.  Nothing like riding a 2 x 10 plank for a hundred miles. I'm thinking this frame is gonna be alright.  I left the chainstays a bit longer in case you want to run a 28c tire. The curiosity is building with this frame but I still have a long way to go. 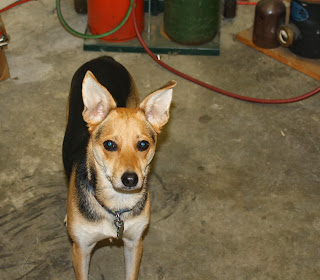 Dizzy spent some time out in the shop with me as usual.  He's turning into a pretty good dog. He's a lot like a wild horse that will occasionally listen to you.  He loves chasing deer and eating spaghetti.  We love him to death along with the rest of our animals.  Thanks for stopping by.