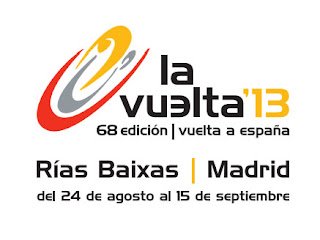 The Tour of Spain just kicked off this past Saturday and I always find myself looking at pictures of Andalucia.  Its a beautiful place with a lots of fun loving people, and muchos ciclistas.  As good as life is right here, right now, I can't help but to reminisce a little so I decided to post a couple of pics.  There has already been some good racing on the first two stages and Vincenzo Nibali is already in the red jersey due to the fact that Team Astana had a stellar team time trial.  The fun is just starting and I hope this year's race is as good as last year's but for now I just posted some photos of the Andalucian countryside. 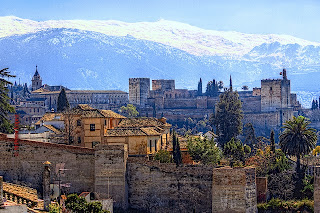 La Alhambra with Pico de Veleta in the background.  From the center of downtown Granada you can be at the top of that mountain in roughly 2 1/2 hours, probably closer to three unless you're a pro rider, those guys fly up it like they have wings.  Red Bull, get it? Bulls of Spain, red jersey.  I have an interesting bull story from when I was over there.  I don't recall if I've told that story or not.  Maybe I'll post something a bit later.


When riding in the south of Spain you're gonna see alot of this, olive groves that produce some of the finest olive oil in the world.  I've read on a couple of occasions that lots of pro cyclists from these regions, and Italy as well, carry their own olive oil with them to races.  I guess its that good.  "What, are you telling me that my Colavita from Wal-Mart is no good?"  No I'm not, but I'm guessing that the people from these areas would spit it out like soured milk.  Always remember, it is not what goes into your mouth that hurts you, but rather what comes out.  I think some guy named Jesus said that.  When I would go for group rides in Granada there would be 4 or 5 Jesuses.  Some of them couldn't hold a line for jack. 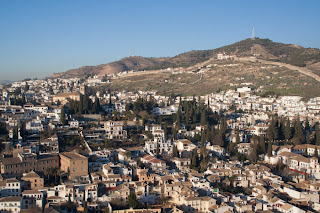 I believe this is a photo of the outskirts of Granada but i could be wrong.  Alot of the Spanish countryside looks like this. 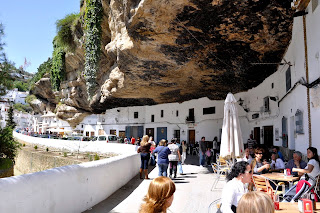 How cool is this. 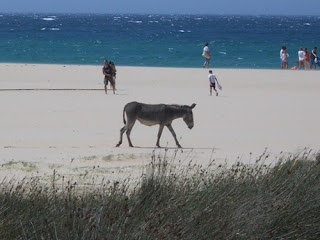 Everybody loves the beach. 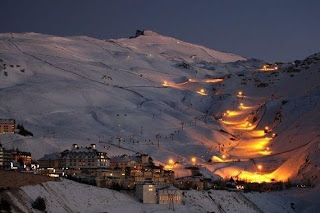 The ski station at the top of la Veleta.  Actually its not quite the top.  If you look at the very top of the mountain you can see the space observatory, now thats el pico.  There is snow up there sometimes until the end of summer.  Its a long ride up cowboy, I can't even begin to explain the descent.  About 1 kilometer down from this ski station I encountered the bull that I spoke of.  It was my first attempt at climbing this mountain when I arrived in Granada.  I had been climbing for roughly 2 hours.  It was the first time I had climbed a real mountain and if you've ever climbed one you know how slowly the kilometers pass.  Depending on how tired you are (and I was very tired) an uphill kilometer can take more than 5 minutes.  My destination was the ski station and I could see it in the distance just about like you see it here, it was daylight of course, and then I saw him.  Standing right in the middle of the road about 200 meters ahead of me was a large bull, all by himself, no one in sight.  No big deal I thought, "I'm sure by the time I get up there he will have moved."  50 meters passed and he didn't take a step.  "Well, I'm sure once I get closer he'll move on."  Another 50 meters went by and he's just watching me come.  So now I'm starting to think just a little, "Should I turn around here and avoid a possible confrontation with this bull?", cause at this point I was gassed and had no kick in me whatsoever but I really wanted to get to that ski station to consider my climb finished.  If I turned around now it would haunt me until another chance to climb it came.  "No way man. I'm not turning around here no way.",  I says to myself.  So I kept turning the pedals over ever so slowly hoping the bull would start walking away. I was inside of 100 meters now, then 50 meters,  I was wondering what he was making of my bright yellow vest and if that would instigate him to come at me, 40 meters, 30 meters, 20 meters away from him and his skin was starting to fidget and flinch. He was facing me and staring straight into me now. He was right dead in the middle of the road so I decided to go toward the left because on the right was a big time dropoff, you can see it in the photo above.  I was less than 10 meters away from him when I kicked it and if he would've wanted me I had nowhere to go but luckily he dropped his head and swung back toward the right and ran off down the hill.  "Whoooosh."  Big sigh of relief.  "Thank you Jesus, thank you Lord." 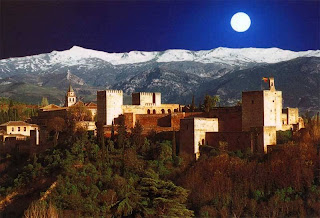 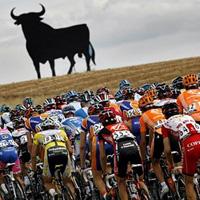 I almost forgot the trophy girls. 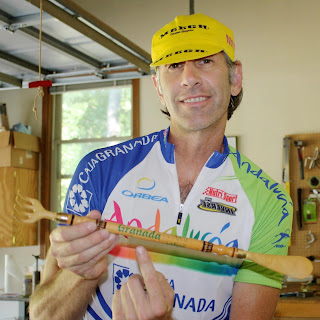 This was a little present I received while I was over there.  They unexpectedly threw me a surprise birthday party over there.  Its the only one I've ever had so it was pretty special.
Viva Granada! 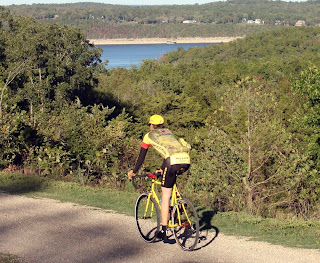 Alright, this is not Spain, this is me in the grand ol' Ozarks of Mountain Home.  Whenever I find myself missing Spain I try to remind myself that this is beautiful countryside also and if you're able to be on your bicycle then anywhere you are is a beautiful place to be. Enjoy!