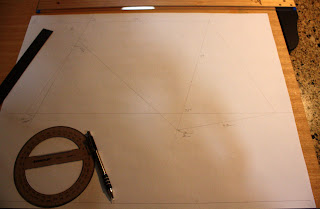 Yesterday afternoon I started a new build.  Its a 59 cm road frame with a sloping top tube that tightens it up quite a bit.  The majority of the frame is OX Platinum with a 31.6 mm down tube so it should be pretty light and with tighter triangles it should eliminate most of the flex that is common with larger frames.  This is where I think fillet-brazing is an advantage because you can build up a good concave around the bb shell and I think it produces a stiffer bb area than say tig welding.  You would think that a lugged bb shell would produce the stiffest steel frame but all the lugged frames that I had seemed a bit sluggish.  I'm not an expert on lugged frames at all.  I've never built one basically because I chose fillet-brazing as the technique I wanted to use and I've stuck with it.  There are plenty of good builders out there who produce some beautifully crafted lugged frames and my hats off to them.  Maybe one day I'll build one but at the time I'm not interested.  I still start every frame build with a hand made drawing at 1/2 scale.  This is the way Yamaguchi taught me and its the only way i know so I've stuck to it.  I've never used Bike Cadd and its embarrassing that I don't know how.  Its supposedly super-easy but I've just never got around to messing with it, besides, starting each new frame by sitting down and drawing all the details by hand is a great way to start out, it pulls you in sync with the frame, and its kinda like running through your notes before you take a test, its relaxing and one of my favorite parts of the build.  After the drawing I start the build with a perfectly level junction between the bb shell and the seat tube, its much easier than filing the seat tube, putting it back in the jig to check it, and then pulling it out again to make corrections.  Just level the seat tube in the vise, and file the miter until the bottom bracket shell is level and you should be good to go.  Once you do a good tight miter you won't settle for anything less on the ones that follow.  The 59  mark on the seat tube shows where the top tube would intersect if it was horizontal and then when you throw in the slope, this one is 5 degrees, it actually intersects the seat tube at roughly the 54 cm point.  This is probably boring you to sleep so I'll shut up now.  The weather here in Mountain Home has been beautiful these last few days.  Today it was 65 degrees and sunny.  It felt like a spring day and i was moving pretty quick in the shop. If this is global warming  then I'm all for it.  Just kidding.  I do not like cold weather at all but I'm a big fan of polar bears.  Bottom line is its outta my hands, if they need me to adopt a polar bear some day I will.  Pit bulls, hah! Imagine riding up to the base of a hill when you know that the 3rd house on the right has a polar bear.  Can you say cardiac arrest?  "Boy, you know where you are, you in the jungle baby, you gonna diiiiiiieeeyyyyyyeeye."  That was an Axl Rose reference, I do those from time to time.  One time Yancey and I hit this little kicker outside of Jonesboro that is about a 15 percent grade for about 50 meters and there was a pit bull loose in the yard.  Man we were dancing on the pedals like Marco Pantani and Jose Maria Jimenez while that dog was singing "Your ass is mine."  I'm just glad it was Yancey's chain that was slipping and not mine.   This frame was cut and fit by 2:00 so I put the files up and got a cup of coffee and went for a ride.  I have about 4 or five rides on the carbon frame without issues so I'm gaining confidence in it.  It is amazingly comfortable on the road and rides great when you're in the saddle but when you stand up and kick it has a little flex.  To tell the truth it doesn't ride much differently from the carbon bikes I used to ride, like the Look KG 171, 281,381, etc.  I think the flex is not really coming from my carbon layup but from the smaller diameter carbon tubes that I used.  The head tube area feels rock solid, its just the bb area that seems to soak up some of your out of the saddle kicks.  No worries.  On the next one I'm going with a little larger diameter tubes and maybe a couple more layers of carbon and we'll see how it changes things.  I really want to figure out how to build carbon lugs.  Thats what I want Virginia.  I'm gonna tack this frame in the morning so maybe this weekend I'll have some more pics.  Thanks for checking it out.  Hasta luego. 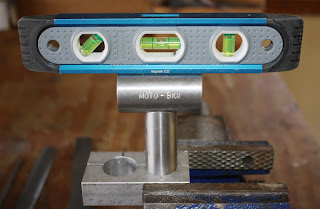 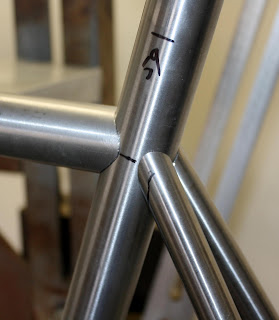 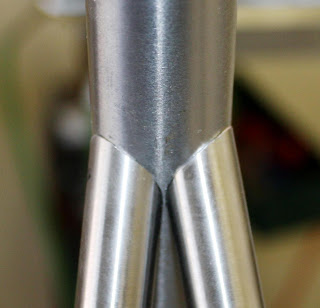 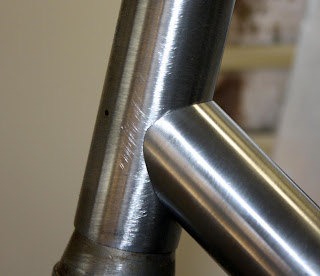 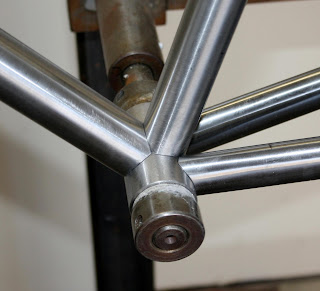 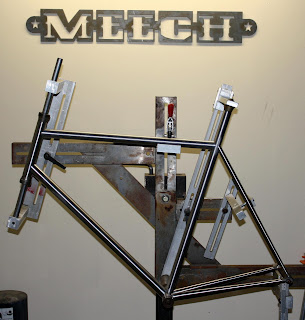