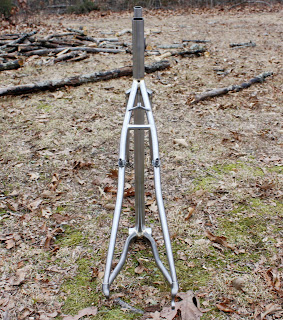 Just finished building the fork and cleaning up Branton's cross frame this afternoon so I wanted to get some pics up before it goes over to Ace's for some color.  This   was a unique build for me for a couple of reasons.  Its the first time I have used internal rear brake routing and its also the first time I have used the custom cutout in the right chain stay in place of the usual indentation. 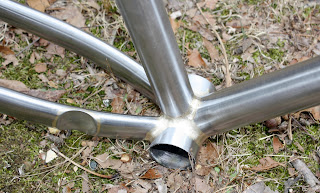 I like the way it looks, clean and custom. 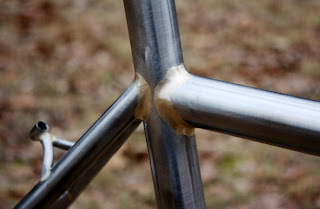 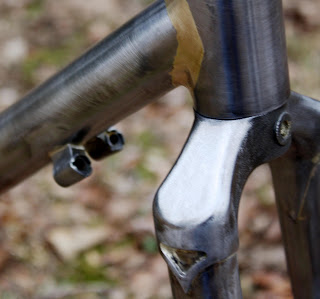 Branton wanted some down tube shifter bosses brazed on instead of the top tube mounted triple cable stops.  When racing cross he prefers to suitcase the bike instead of shouldering it.  I have only done 6 or 7 cross races myself but it always seems like I end up suitcasing the bike as well, seems quicker but its just a natural reaction for me.  Whats really a natural reaction for me is riding the bicycle versus carrying it.  One of these days I'll get my MEECHcross racing track built and the only reason for carrying your bike then will be if you break it by casing a double-jump.  My dreams are bigger than my pocketbook.  I'm starting to get a little frustrated because over the last year I have tried at least a half-dozen times to win the lottery in order to start MEECHcross racing, all to no avail mind you.  I didn't think anything was more difficult than cyclocross racing but winning the lottery is proving to be much harder than I expected.  Becoming an astronaut is a joke, besides, when I win the lottery I'll buy my own rocket, just like Richard Branson.  I'll race him for pink slips then I'll have two rockets, maybe, you never know when it comes to rocket racing, thats a dangerous bit. Speaking of NASA, they better hope I don't become president, which is gonna be way easier than winning the lottery or some rocket race, because I'm gonna slash their budget by half and use the other half to buy bicycle stuff.  It'll be better than just blowing it on the moon and Mars.  I say give that to the Russians, let'em go some place warmer and get'em off our coat tail for a change.  If by chance they make anything of it we can just blow it up from down here and not mess up the Earth, give Russia to the polar bears.  More money & bicycle stuff for the U.S., no Russians, a thriving polar bear population, and a beautiful custom cyclocross bike all in one blog post.  I'm surprising myself now.  I think I've been watching too many Tosh.O marathons.  I just realized that I forgot to add the anti-brake chatter cable stop on the fork that Branton was wanting so the frame isn't actually finished, but all that other stuff is taken care of.  If there are any Russians out there that can read this, I'm just messing with you.  I like the Russians, they are fun to party with.  They can drink a couple of liters of vodka, beat you at chess, then go out dancing. How do they get anything done?  They don't, thats why it failed. It's a shame that the United States can barely keep up with them.  As for all you clowns at NASA, you can consider yourself unemployed when I'm elected. 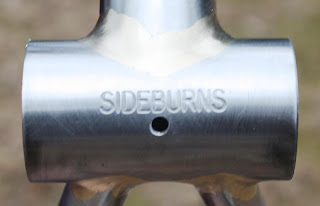 You won't see another serial number like this ever, guaranteed.  I'm burning the mold as we speak. 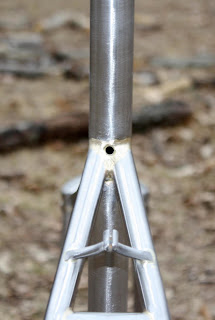 You route the cable housing in from the back and out the front.  In through the out door.  Isn't that a Zeppelin album? 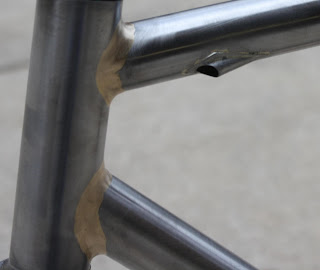 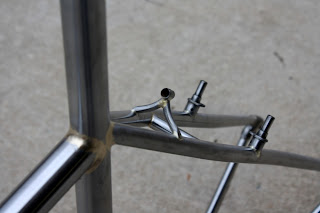 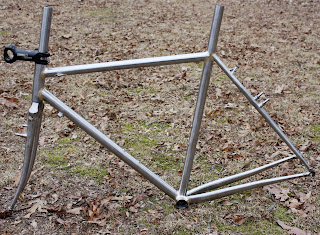 Can't wait to see how Branton decides to paint this dude.  Check back for the finished product.
Posted by MEECH at 6:40 PM