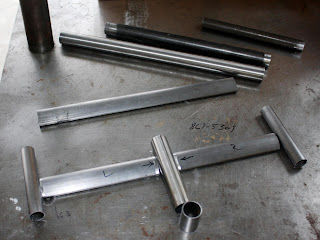 I made a little progress on the fixed-gear frame this weekend.  This has been a slow build because its not for anyone in particular and what started out as "just gonna build a simple fixie frame because I had some track dropouts laying around",  has turned into a one-off-fest.  I was just gonna throw some drop bars on this thing but then I decided to try my luck with some handmade aero bars.  With a little steel stock that was laying around and some airplane strut tubing from the Spruce I brazed up my first set and they're not so bad.  Let me change that, they're bad, they're "jam beef-mondo bad."  I built them fairly quickly and on Saturday morning I was cleaning up the brazing when I decided to test the strength.  I mounted them in the BB shell fixture on my alignment table and grabbed them on the ends and put a little body weight on them.  I felt a little bend in them before I got the entire $1.60 that I weigh on them. Where the aero tubes were brazed onto the stem tube was folding inward, stem was too light. What do you expect, I'm an ex-racer, I want my bike to weigh nothing.  Damn, not good, screwed-up, wasted time, yeah I was pissed.  Pffff, garbage can.  Wait just a second there hotshot, you can fix these.  So I ripped the bars of the stem, cut the stem tube off about one inch in front of the steerer clamp and used that as an inside lug and slid a larger beefier tube over it, and then re-brazed it with a mondo fillet.  The stem is the "beef", the fillet is "mondo", and the "jam" is just something that sounds sweet, "jam beef-mondo bars."  Now you can do tricep dips on 'em. If you hit a car with these something is gonna get scratched.  I included a couple of pics of the fork.  I still haven't brazed the crown race ring on yet.  I'm out of silver and i can't order any until my new credit card shows up.  Apparently someone got the number off the old one so its best just to change.  You can see the cut-outs I put on the inside of the fork blades so you can get an average sized tire in there.  I've made a couple of mistakes during this build but they were easily fixed and educational so no big deal.  Got a few more fine details before its completed but it will be done before long.  I cannot for the life of me figure out how I want to paint this thing.  Racey. Chao. 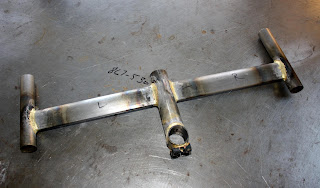 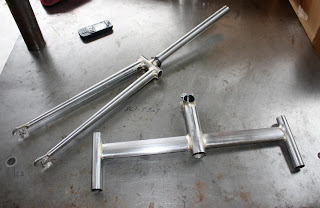 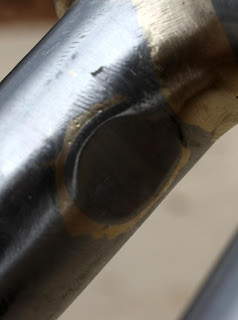 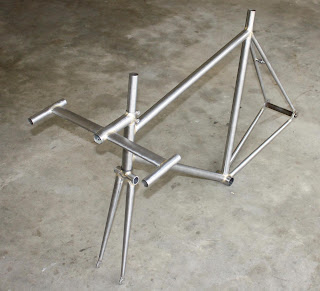 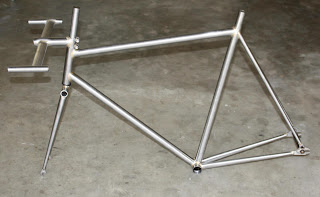