Experimenting, Playing, or Just Screwin Up?

Here are a couple of pics of the fork I'm working on for the fixed gear frame.  Super simple design that I got from a friend's old Raleigh from the early 70's with a couple modifications.  The crossbar part is gonna be cut down a little so that its not so swanky (I think I'm gonna name my first-born Swanky.  Wonder what he'll grow up to be?). Although, the more I sit here looking at this picture its kinda growing on me as is, it just doesn't quite fit the style of the frame I'm building. Maybe on another frame, something a little more James Bondesque.  FACT:  I've never watched an entire James Bond film.  I've seen bits and pieces of just about all of them but basically couldn't sit through more than 15 minutes before changing the channel.  They just don't do anything for me.  So anyway this frame is kinda leaning toward a time-trialy sort of direction and I wanted the tire to fit really tight in the fork.  Guess what chief?  You measured once and brazed it up twice now the only rubber that will fit is a 20c, hence the cutouts in the side of each fork blade. Now you can get a 23 maybe 25c in there but its as snug as love.  "You just gonna leave it like that?"  No Virginia, I already brazed in a couple of patches but I forgot to shoot photos.  Its coming around and its even more custom.  Right now its at the machinist (he's the guy with the Raleigh) and he's cutting a crown race ring for it and making me a couple of custom...., well thats a secret for now but you'll see it soon.  Check out those custom dropouts.  I was gonna braze some stainless face plates on them but I didn't have the cutting blades I needed so while not wanting to go get them I noticed some spare change sitting on the alignment table and thought, "...those nickels are about the right size, wonder if those are brazeable?"  Who knows what type of garbage they use to make money these days. I heard they put ground up chicken lips in the center of quarters, who knows what's in nickels. Not sure if thats true or not but they are brazeable and make for a pretty sweet, fat pair of custom fork dropouts.  Trying to clean them up after brazing is a bit difficult and they got a little filed down.  Apparently chicken lips turn brownish-red after heating them up to 1250 degrees, but you can tell that they're jen-u-whine authentic nickels because if you look real hard you can see Jimmy Carter's head. Jimmy wasn't that great of a president but he is doing some pretty noble stuff these days.  I heard the Jews and Palestinians are gonna spend Christmas together and give each other presents. Boxes wrapped up real pretty with bows that make neat sounds when you shake them.  It'll be one to remember. Unfortunately, after all that work I realized I brazed the nickels on the same side of the dropouts and therefore they're useless. Unlike you Virginia.  Dude, when its 35 degrees in my shop, my brain flows like molasses. FACT:  I'm thinking of the south of Spain right now.  Oh well.  I just got Phil's 650B tourer back from Ace's and it looks sweet.  Gonna post some pics of that later today.  Hasta luego. 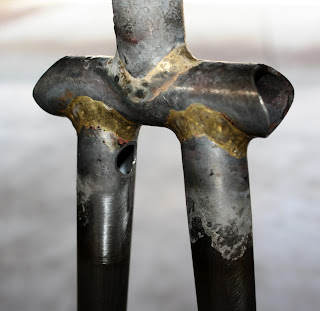 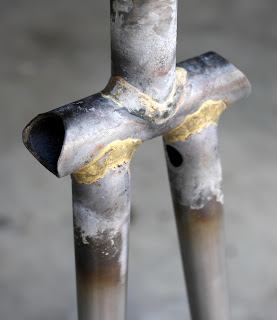 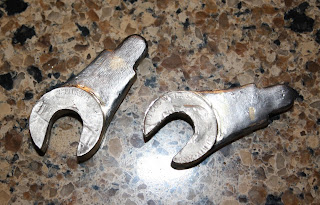 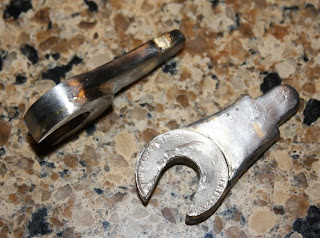