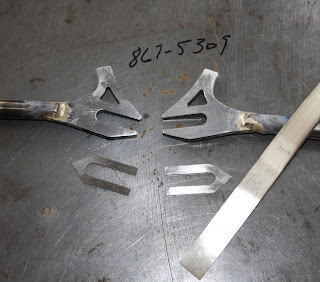 A while back when I was caught up I started on a fixed gear frame, basically just because I've had these track dropouts laying in the toolbox forever.  I've only built a couple of fixed gear frames since I started building frames.  They've never really interested me that much and I don't get any calls for them.  Around here, Mountain Home,  with all these little punchy hills, you're gonna need some gears, they never stop.  I do like the simple idea of just jumping on a single-speed bike and going, don't worry about what gear you're in, its the only one you got.  So anyway, I got busy with orders and put everything in a box and forgot about it till the other day.  The straight track dropouts are basically made out of steel stock and the paint will get knocked off first time you throw a wheel in, and then rust starts to form on them.  No big deal really, its only an eyesore, its not like a 1/4" thick piece of steel is gonna rust out in the next fifty years and most of the fixie riders I've seen like to beat the hell out of their bike anyway, more like free-stylers.  But, if you want your bike to have a little extra flare then some of these little stainless track end dropout things are nice to have. I'm not sure what the real name for them is but  I've seen these for sell, I believe at BikeLugs.com, and was gonna buy some but by the time I find them, order them, and receive them, I can have them made.  I don't have any machining equipment in my shop so I cut these out with a Dremel and cleaned 'em up with a file.  A machinist could've cut them a little cleaner but they turned out alright for the first set and they only cost me a little time. That silver brazing ribbon that my buddy gave me came in handy, first time I've tried that stuff.  I shined them up a little bit and will do a better job after the frame is finished.  Still not sure exactly what the frame is gonna look like but I think I'm gonna make one of those 80's looking time trial frames with a down sloping top tube, maybe some bull-horn bars with fuzzy dice and a rattle snake's hide on the down tube, we'll see.  After I finished brazing the dropouts it was getting a little late so I spent about 10 minutes on a little fillet-brazing experiment.  I was wondering how small of a fillet you can use and still have a structurally safe frame so I laid this one down for a little test. Its about half the size of my normal fillets and not even a good one at that.  After bending the tube down and back and wadding that tube up like a piece of paper a small crack finally showed through, but its actually the tube, the fillet was plenty strong.  Tomorrow I may go a little smaller.  Thanksgiving is closing in so its time for a couple of days of eating and maybe get a couple of rides in.  Hope everyone has a good one.  Hasta luego muchachos. 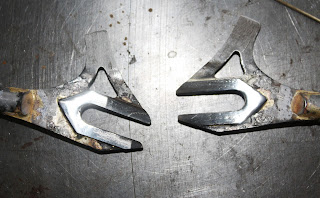 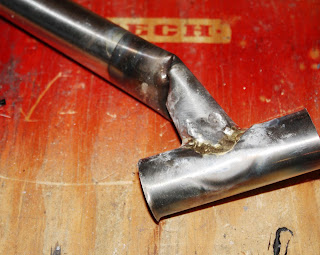 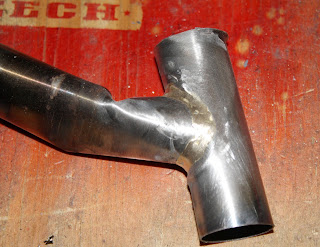 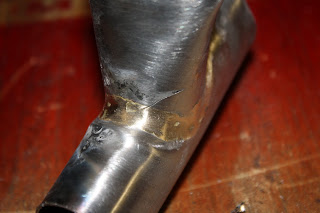