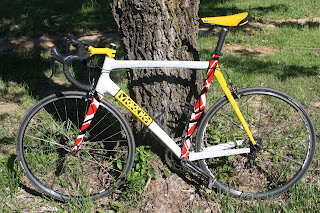 The other day I was out for a little spin and ended up breaking the crank bolt on my Campy cranks. Although I was a little surprised, I didn't think much about it because I have done little to no maintenance on my old S3 frame and if you don't give your bikes a little love every now and then it's gonna happen. I've been riding that old bike for probably around 4 yrs. or so without any change. There may have been a cyclocross build mixed in somewhere but I can't remember it at the moment. Anyway, that broken crank bolt was the straw that broke the camel's back in me deciding to build up my carbon bike that I've been itching to ride. It should've been built up a long time ago but one thing after another kept me putting it off until it was pure necessity. So here it is.

It had been almost 2 weeks since I had been on a bike when I threw a leg over my new steed and I wasn't anticipating great sensations in the legs, however, just a few minutes into the ride I came upon a short, sharp uphill and I immediately knew this bike was faster than my other. In all fairness, it very well could've been the fact that I had a clean, fresh drive train but the bike definitely went up hill with less effort. It's probably a pound or maybe a pound and a half lighter so maybe I felt that. This is also the first bike I have personally ridden  with a tapered head tube and steerer. I have built plenty of them but never had the chance to ride one for myself.

When I stood up out of the saddle it was like the bike wanted to remain upright and didn't want to rock side to side like I'm accustomed to. It felt odd at first like it didn't want to change directions but I quickly got used to it, and after riding it for an hour or so the last couple of days I'm good with it. I can ride at least one more gear and sometimes two on both the uphills and the flats. Once again, I'm sure the new drive train helps a lot. My old chain and rear derailleur were so gunked up with crap that it took me almost an hour to get the derailleur clean.

The surprise of the build, and probably of any and all builds of my lifetime, came when i I had finished cleaning the derailleur and started putting the pulleys back into place and realized I had lost one of the little bushings. I had taken the derailleur outside and sprayed it down hard with brake parts cleaner to ease some of  the caked on oily grit that had built up over months of riding. I was under the overhang of the house since it was raining fiercely but I was holding the derailleur out over the grass so that all the greasy parts cleaner wouldn't get on my steps. So after all the spraying, cleaning, and wiping down, i go back to the shop table to put it back together and realize the pulley is locking up because the bolt is pinching it. I had briefly forgotten about the pulley being in there but immediately knew something was wrong and so I took the other pulley off in order to find out exactly what I had lost. After seeing and remembering what I was missing I honestly wasn't even gonna look for it, I knew it was gone. I glanced over the shop table in hopes that my little dilemma would be easily resolved with no luck and then started looking around the floor between the shop table and the back door which are on opposite ends of the house. Had it been anywhere on the shop floor and I would've found it, I would've considered that to be a small miracle, but step after step led me closer to the back door and before long I was back on the steps, under the overhang, looking down at the wet, greasy grass where I had sprayed about a half a can of parts cleaner on it. I asked myself, "Why would I even attempt to go down these steps and look for a little greasy bushing in the rain that probably doesn't measure much more than 5 millimeters across?"  It didn't even really seem like a smart thing to do as i stepped out from under the overhang, down the stairs, and out into the pouring rain. Not only was it pouring rain, but I was standing directly under the overhang where all the water is running off the roof and puddling up in the yard below. I half-heartedly gazed around the blackened grass that I had refused to weed eat a few days earlier when it was dry and obviously didn't see anything. My eyes were roughly 6 feet away from the grass and have I mentioned that my eyesight isn't quite what it used to be, and that I've got an eye prescription for glasses that I have yet to fill? So at this point I had only been looking in the grass for maybe a minute  and my shirt and cycling cap were already soaked from the steady dripping of the rain off the roof. Just as I was about to take a step back toward the stairs I told myself that unless I bend down there would be no chance in finding it and that not looking would have been just as effective. So I reluctantly squatted down and put the palm of my hand on the tips of the grass blades and gently pushed them to the side until I could see dirt. Low and behold, there it was. I was blown away and just sat there staring at it. It couldn't have shown any more brilliantly if it had been a gold tooth. "Huh? What the hell are you talking about D? A gold tooth?" Ok, maybe a gold coin would have been a better analogy. I picked it up and wrapped my entire hand tightly around it like it was the key to the universe and walked back to my shop table in total and utter amazement where my derailleur laid. I had truly found a needle in a haystack. 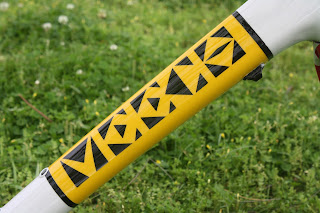 I love this logo that Vince Pearcy Designs and I came up with. I've had some compliments on it but I think some people may find it hard to read. That's ok because that's actually the look I was going for. It wasn't that I didn't want people to be able to read it but it was supposed to be more of a look. If people recognize the look then it doesn't really matter if it's readable. Although it could limit people from finding your info on the website if they don't know what it says I guess. Oh well, that's a chance I'm willing to take. It's meant to be more intriguing and to make people look a little harder. I guess mission accomplished, no? Just be certain that I still have many a stencils of the older MEECH logo in my desk drawer and I'm not opposed to using them. It's your call. But for the time being I'm having fun with this one. 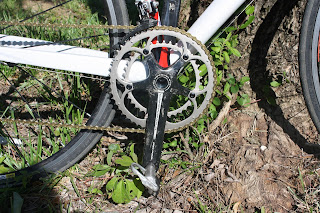 Got some new record cranks. 177.5s no less. They're the older style but they feel like home going uphill. I've been riding 175s for the past year or more and all I can say is that I don't get along with 175s. "One seventy seven fives, you're the girl for me." 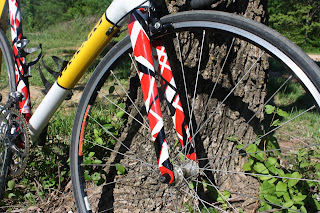 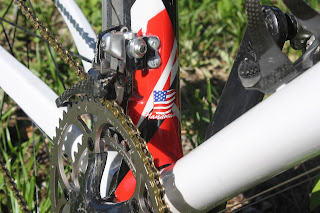