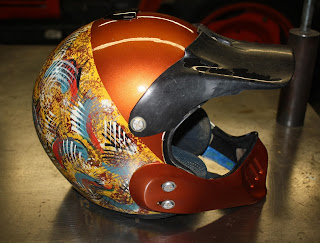 I've had the itch to play around with some painting ideas and so I got out the old motocross helmet, sanded and primed it, and then gave it the old college try.  Believe it or not, there was actually a Troy Lee Designs paint scheme on this helmet before I painted it. Yep, you heard me correctly,  I sanded down and painted over Troy Lee's work.  While the original paint scheme that he had done was pretty nice, for some reason it never really felt right to me. He kinda missed what I was trying to achieve.  But that's ok.  I wore the helmet many years and was tired of looking at that old paint job and decided to give it a MEECH makeover.  In some ways it turned out better than I expected but the whole  Toxic Orange bit on the front kinda disappointed me.  I should've just went with the free hand over the entire helmet instead of trying to mix it up. I can always repaint it again but for now this is it.  I don't have a motorcycle to ride at the moment but I've had a real bad itch here lately.  I have a MX track so close to my house that I can hear them riding on the weekends.  I've been over there about once a week since moving back to Jonesboro.  I even bought a pair of boots the other day off of  Ebay.  I think I've officially entered my mid-life crisis. Not sure how this is gonna play out over the next few months but the MEECH Custom Bicycles blog could turn into the MEECH Bicycles and Motocross Bikes blog. 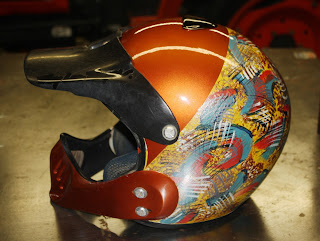 You can see where I peeled the Troy Lee sticker off the visor. 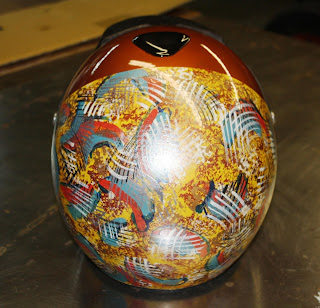 Not a very good picture here because of the flash.  I had no plan at all as to how I was gonna paint it other than I wanted a yellow base. The rest is just picking a color and a brush and having at it. I did all this paint work with 3 different brushes and I didn't reduce the paint because I thought it might dilute the colors, so there is a little bit of texture created where the paint was a bit thicker. Normally I believe everyone uses an airbursh for jobs like this but I prefer the raw look of bristles.  For the most part it's pretty smooth. Next time I may reduce it a little and see what happens. Like my friend Bob Davis always says, "At 100mph no one will ever notice.
I had intended to have the MEECH logo painted across the back in black but I was short on time and ready to finish it up.  I'm ready to let go of my hands on a bike frame.  Shouldn't be long.  I've got a touring frame sitting in the shop that is awaiting a fork and then I'm gonna have at it.  I got some new epoxy primer to try out as well.  Supposedly it's some hot stuff.  We'll see.  Thanks for stopping by.