Scoot's Old Frame Gets A Makeover 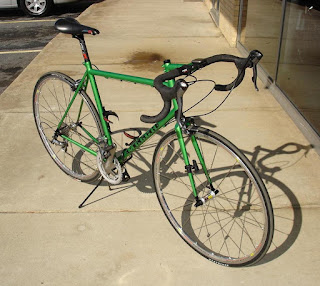 Scoot dropped off his old MEECH when he picked up his new one the other day for a couple of quick changes to the setup and some fresh paint.  This is the before photo of how it looked from day one however when he handed it off to me it didn't look quite this good.  It kinda looked like he had ridden it to Hell and back a few times and people had thrown stones at him along the way.  I asked him about it and he told me that it hadn't been to Hell, only 5 consecutive Bicycle Tours of Colorado.  I did one of those with Scoot about 6 years ago and got enough climbing in one week to last a lifetime.  The thirty minute descents are nice though. Anyway, he definitely road the molasses out of this frame and it needed some new paint badly. 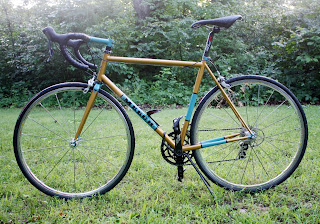 And this is it.  I've been extremely busy here lately and so I didn't have time to get crazy with it like I wanted to but I like the way the colors work.  I got some more ideas after painting this one but who knows when you'll see them. A storm was blowing in as I was trying to take pictures so the lighting isn't the best but you can get a good idea of the colors here. When the sun hits this turquoise it gives it a bit of a darker, deeper, tint. 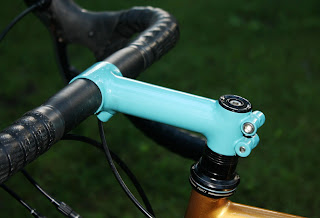 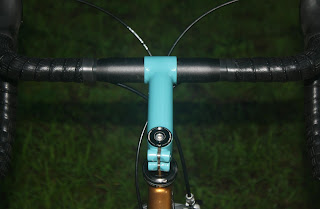 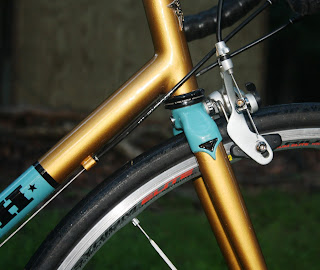 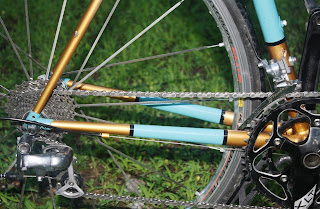 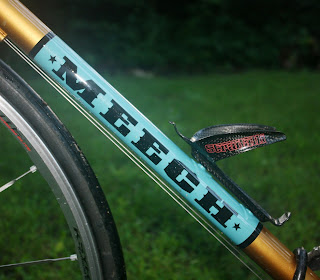 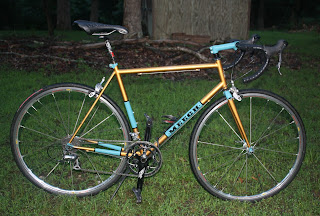 I took it for a little test ride after the storm passed just to see how it felt. It seemed to climb nicely however the downhill was a bit sketchy since Scoot only left me about 30 psi in the front tire.  Front end washed out in a sharp corner and I scratched the new paint and tore up all the bar tape on the left hand side.  I turned the bike this way so he couldn't see it. 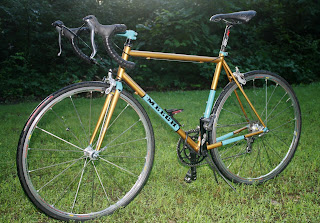 Just kidding Scoot.  I didn't crash your ride.  But I did accidently scratch it while throwing the parts on it.  Scoot and I go way back so I'm guessing he'll let a little scratch slide on by.  I'm hoping he will anyway.  About 25 years ago I saw Scott almost pile-drive his roommate in a wrestling match. It's a good thing that Scoot's knee blew out or that guy would be looking like Stephen Hawking about right now.  I think someone may have spiked the Red Bull that night. Ah, those old college days.
Like I mentioned in the past post about Scoot, he's a blast to put in the miles with.  We've had a handful of memorable bike trips together.  Bicycle Tour of Colorado and Taos, New Mexico, not to mention all the short trips out to Craighead Forrest back in the college days. He's a pleasure to work with.

This is the last frame you'll see for a while as I may be a little absent from blogging in the next few days to come.  Anne got a new job in our hometown of Jonesboro and we're packing stuff up for the move as we speak.  Mountain Home has been a great place to reside for the past 6 years but we've been hoping that we could get back to our little house for quite a while and it's finally gonna happen.  I'm gonna have my original shop back so I'm pretty excited about that.  It's where the first 5 or 6 MEECHs were built. Also I'll get back to those old roads that I know so well and hopefully get some good riding in with old friends.

I don't want to spoil my secret plan but I'm so excited that I can't keep from telling someone.  Our plan is to live in our little old house (which is falling apart since nobody has been living in it) until we sell this house, and then hopefully we can build a new one.

"That's not much of a secret plan D."

I know, but try and follow me here.  If and when we get a new house, that will leave the little old house vacant.  You with me now.  New MEECH headquarters.  One end of the house is gonna be the machine shop/brazing room part of the workshop while the bedroom on the other end is gonna be a climate-controlled painting booth.  Gonna have a kitchen to cook all the grilled-cheeze sandwiches you can eat and a cappuccino machine for the morning ride buzz.  There might even be enough space for a carbon frame building room. No more sleeping in the dog house for this cat, I'm just gonna go sleep in the fillet-brazing room, carbon fiber room, or the paint-spraying room. By next year's Tour I'm hoping to be living off of beef jerky, chocolate milk, and fumes. That's the dream and I've got my fingers crossed it goes accordingly.  So anyway, I'll try not to be a stranger to my own blog but it's gonna take me a while to get all set up.  I've got all my orders filled except one and I'll be posting some pictures of it and the new shop as soon as I get everything up and running again.

Tour is less than 3 weeks away.  July 4th is the day. It looks like it's shaping up to be a good one.