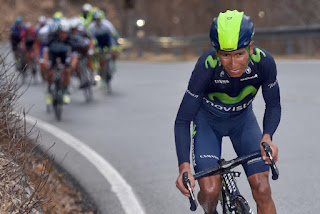 Right away you could see his good climbing, or as we say here in Colombia, that he was an escarabajo,” he told AFP, referring to the traditional name for Colombian cyclists.

“He was very passionate. He would get here early, ride through all the way to Moniquira [another town up the road] and turn back … although sometimes he arrived a little late for school.”


“It wasn’t for sports,” he said. “He bought it to get around. ‘Till then he hadn’t shown any interest in cycling, but soon someone said he looked like a cyclist, that he was going to be a very good cyclist.”

Quintana was 15 years old at the time. The bike “was used, but in good condition. It looked good, and I started riding it to school … and got hooked,” he said.

In a region with a passion for cycling — and an altitude of 6,562 feet above sea level — Quintana was soon overtaking hardcore riders, blowing past them and their fancy equipment with his school books on his back.

He remembers his principal at Alejandro de Humboldt Technical School worrying that he and his friends would take a spill on the narrow road to school, with its heavy traffic of trucks.

“He would get mad because he saw us going fast downhill … and he wanted to take away our bikes because it scared him,” Quintana said.

Former teachers remember his passion for dance and theater, as well as cycling — but less so for his studies.

“He was pretty quiet. … He was shy but very respectful,” recalled his language instructor, Flor Mireya Vargas, one of many teachers who cleaned up his wounds when he would crash his bike.