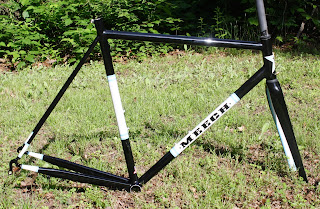 Finally!  At long last I finally got Nate's frameset finished up.  I was beginning to wonder when I would actually finish this frame.  I was only feeling the pressure that I put on myself, but trust me, that's more than enough.  This was such a straightforward build that I never imagined it would take me so long.  In the end, it was nothing more than getting the time away from everything else in order to focus on building a good (I think great) frameset.  These last few weeks my head has been really cloudy.

"Was it your allergies D?"

No. They really haven't been that bad.

"Was it because your eyes seem to be getting bad and you can't see very good?"

I don't believe that it was, however, these past few months I can tell my eyes are not quite as good as they have been and glasses are in the near future.

"Was it the fact that your mother-in-law was visiting for 3 weeks?"

No. I enjoy having Sally come visit us.  She makes a lot of baked goods and also has this killer recipe for some type of baked shrimp scampi casserole that Red Lobster needs to get a hold of.

"Was it the fact that your wife wanted to go on vacation?"

Nope.  We still haven't been on vacation.  We haven't had a real vacation in probably 3 years, but we're taking Jack, Dizzy, and Pinky on a little beach trip here in about a week.  Can't wait.

"Was it because you think you may be moving back to Jonesboro and you're gonna have to haul a house full of junk back there?"

It is a possibility.

"Was it because you've been putting in 300 mile weeks for the last month?"

"Was it because Louis Maxximus "Soul Katt" Jackson has been MIA for the last 3 weeks?"

Honestly, I think it was nothing more than having too many things to do in the time that I have to get it all done.  Luckily for me, my customers have patience. And I do appreciate you all asking.  Sometimes you just gotta air it out in order to move forward. Now let's go check out this frame because it's shipping manana.

That's supposed to be pronounced "man-yana" but I don't remember how to put the little accent symbol over the "n".

"Shut up Dimitri and let's go look at Nate's frame."

Ok. Vamos. This is a special frame to me and I'll tell yall why a bit later. 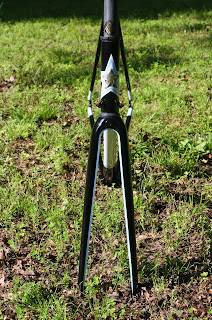 This frame is painted black, white, and egg-shell blue for those who may be color blind. Enve carbon pointing you where you want to go. 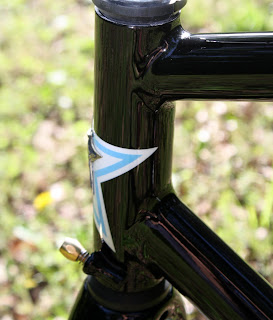 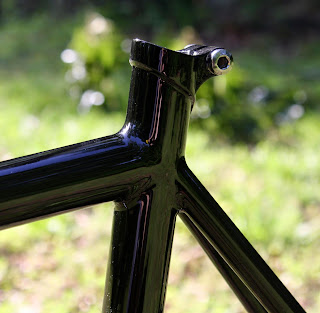 This is the first time in quite a while that I didn't paint the seat lug a different color, but given the color scheme of this frame I think that black looks appropriate. I always put a picture of the rear end because everyone loves a nice hiney. Also, you might be really fast and not ever get to see the rear end of another bicycle.  As for myself, arses are all I see anymore, millions and millions of arses.  Nothing but arses.  Arses, arses, and more arses. Arses. 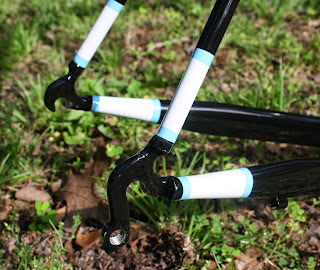 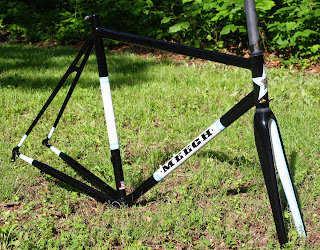 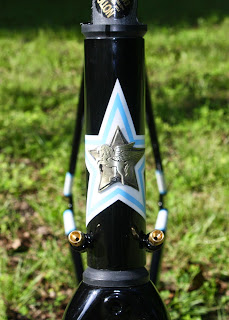 "You already said that!"

I know, I know.  I'm just messing with you.  I'm getting old.  I have been telling the same stories over and over to people who've already heard them all.  Worse part is, I know I've told them and I continue to tell it.  The other day I'm almost certain that I had the same exact conversation with the guy at the paint store that we had two months ago.  While we were talking I was looking at his eyes thinking, "Does he remember having this same conversation two months ago?" And his eyes were telling me, "Dude, you told me this same story two months ago." I went ahead and finished the story for the second time because you can't just stop right in the middle. 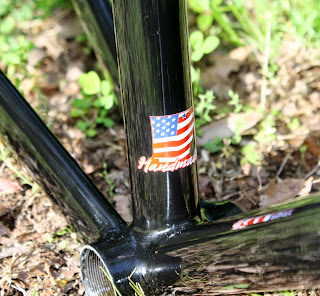 In case you didn't know, these frames are handmade by MEECH in Mountain Home, Arkansas. 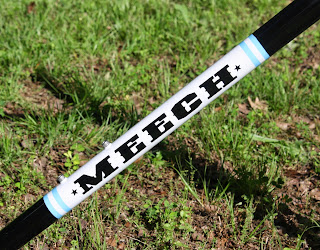 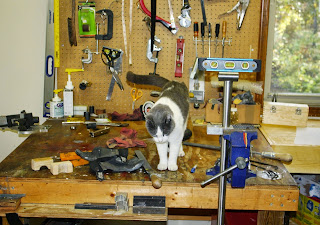 Louis Maxximus has been missing for over 3 weeks now and I hate to say it but I think he's on higher ground now.  We've lost both of our cats in the last 6 months. We're not sure what happened but we fear that he may have run into a bigger animal.  Louis wasn't a big cat but he had a big heart.  Over the course of roughly 7-8 years, I saw Louis come home several times knowing he had been on the rougher side of a skirmish. Louis was a lover, not a fighter.  After a rough night out, he'd always eat a little food, lick his wounds, take a nap, and then the next morning he'd be right back at it.  He never made any excuses, he just gave everything he had on every given day.  If a cat has 9 lives then Louis Maxximus used 'em all, and then some.  Hell, I've seen him use a couple in one day.  Louis has been an employee here at MEECH since the very beginning.  Every frame that I've built Louis has been in the shop with me at one time or another and he gave each frame his blessing.  I'm gonna miss him stopping by during the afternoon to visit and see how the frames are coming. Louis was like a ghost.  You could never find him when you wanted to and then as soon as you'd give up looking he'd just appear out of nowhere.  Nate's frame is the last frame that Louis participated in building, but his heart and soul will continue to go into every frame that leaves the shop.  That's the reason MEECH frames climb so well.  I've seen Louis run 30 feet straight up the side of a tree before he ever stopped to look around.  So the next time that you're riding your MEECH and you see a steep hill in front you, have no fear, because Louis Maxximus "Soul Katt" Jackson is here. Love ya Lou!