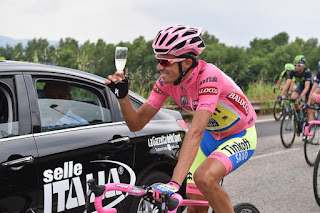 Alberto Contador secured the overall victory in the Giro d' Italia yesterday in Stage 20 after getting dropped with roughly 2oK to go.  He had a rough day but in the end was strong enough to keep two minutes between himself and runner-up Fabio Aru, who won stages 19 and 20. 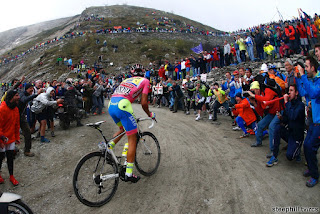 I have no idea where Contador's team was during most of this Giro but he was alone for most of the key moments of the last half of the entire race, like this dirt-road climb in Stage 20.

My favorite quote from this year's Giro was by Contador after he survived Stage 20 and basically had won the Maglia Rosa, he said,
"We'll eat good tonight, however, I will need to watch my weight for the upcoming Tour."

You'd think that a guy, who probably only weighs a buck twenty five, and had ridden 2000+ miles over the course of 3 weeks, wouldn't be too worried about eating a little bit before a race that's over a month away.  I guess that's why he is a grand tour champion many times over. 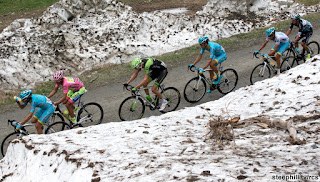 Astana was clearly the most stacked team in this year's race and Little Al is gonna have a hard time winning the Tour if he finds himself in the same situation come July.  However, I could never bring myself to bet against him after watching him win this one.  He suffered crashes, mechanicals, a dislocated shoulder, multiple attacks from Astana, and he still managed to come out on top.  He wants the Giro-Tour double bad. 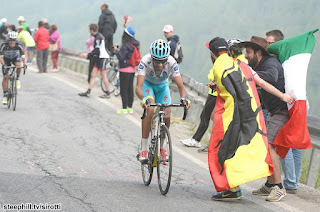 Yesterday Fabio Aru eventually caught and dropped Ryder Hesjedal and Rigoberto Uran to win Stage 20.  Apparently Fabio Aru had a big passion for motocross early on however his parents didn't like him racing motorcycles and so he ended up on a bicycle.  I know the feeling.  I knew I liked him for some reason.  He also attacks really hard.  When he goes, he holds it on for so long that it looks like he would blow himself up. 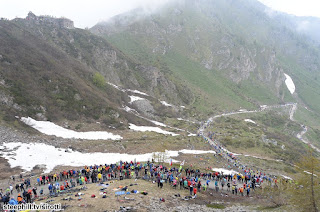 Overall this was an excellent grand tour and one of the better ones that I remember.  I enjoyed watching it on http://www.steephill.tv/ where all these photos were taken from.  They've got some of the best race coverage around.  Check'em out.