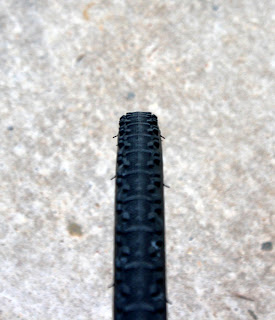 Geez Louis.  I've ridden some squared off tires in my time but nothing like this.  When I threw these tires on I didn't really pay much attention to them.  So I went to take the bike for a spin to make sure everything was in line.  Our driveway is a short, steep one with a 90 degree lefthander at the bottom.  You get a quick burst of speed that will make you tap the brake for the corner on most occasions however I seldom do because I'm so used to it.  So anyway I clip in and let it go, get to the corner and start to turn and it doesn't want to turn, so I leaned into it hard in order to clear my neighbor's mailbox and about washed before I got it under control. I was like, "WTF?"  These things look like something Fred Flintstone would be rolling.  The contact patch is like...well, the whole width of the tire, turning is next to impossible, you have to balance on that razor blade-like edge like a tight-rope walker.  The first five seconds of my test ride were extremely sketchy then it turned to trudgery.  I hadn't been on the bike for a week, the temp was a cool 100 degrees, and my tires were rolling like bubble-gum, but ahhhh, it felt good to be riding. It had only been 6-7 days but I start to get cranky after about 4 days off.  I can't wait to go again today, and I really can't wait till I've got some new skins to roll on. 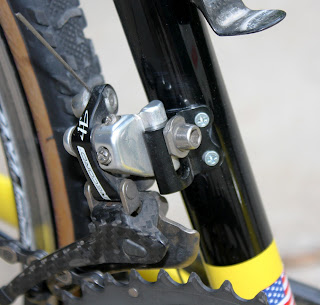 Glued and Screwed.
I didn't braze on a derailleur hanger since i had planned to use a clamp-on, but when I realized that the clamp-on was gonna cover up my "MOTO" I got a little concerned. So this was the quick fix. A little JB Weld and a couple of screws and its not going anywhere Clarise.  This is basically how I'd do a carbon frame.  Turned out pretty clean. 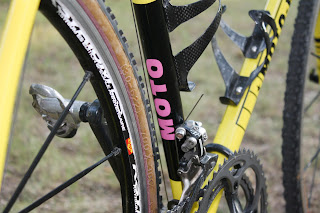 You can't cover up your MOTO.  The next one will get painted on a little higher up.
Cancellara was in another league yesterday in the prologue as he blitzed everyone.  Is he still using that mini-motor?  Had Tony Martin not had issues with his bike it would have been really close.   This should be a good Tour.  Theres a handful of guys that are really close in speed in the mountains and the time trials. I think Cadel Evans has the confidence and the team to win again but I'm going with Nibali from Liquigas as the "protagonista."  I just like their riding outfits.  Hasta luego amigos.
Posted by MEECH at 5:59 AM