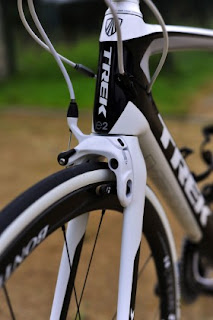 Couple of pics of some newer models that are getting unveiled at the tour.  This is Trek's new Madone 6.9 or something.  Nothing against the name but I lost count like 8 yrs. ago.  It looks to be pretty tight and I'm sure they're good riding bikes but probably not any better than any of the other bikes made, and especially not as smooth as a custom steel frame.  ;0 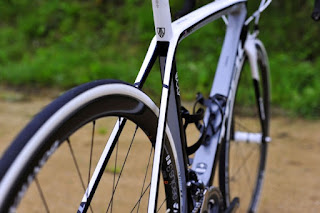 I always assumed that the brake bridge needed to be there, but I guess it doesn't matter if you put one between the seat stays or the chain stays.  I never really use a chain stay bridge unless someone ask for it.  It takes some getting used to looking at it all bare, it looks like it would be weak but I'm sure they have it dialed in.  If Cancellara is stomping on it I imagine its good to go. 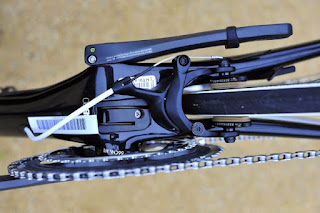 This looks like the pain-in-the-arse design to me.  Neat idea, nightmare to work on. 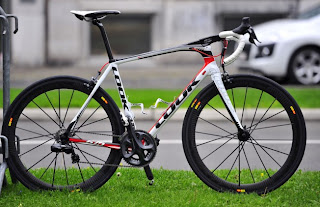 Future bike. This is some sort of new endurance model from LOOK.  LOOK was my old favorite brand.  They were doing carbon even before aluminum became popular.  I'm not sure what an endurance model is but it has something to do with being an everyday, do-everything bike I think.  Innovative looking but I'm not so sure I like it.  I imagine bikes will continue to  follow this trend in the future.  The "endurance bike" idea makes me think of a dirt/road bike and I'm all about that.  I'm fixin to build one.  Road frame, little longer chain stays that will accommodate a 28c tire, long-pull caliper brakes, and you're ready for anything.  Yeah baby, Endurance Bike! 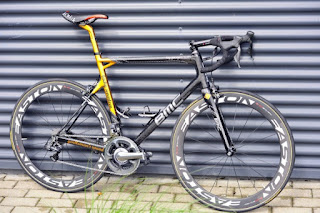 This is a special bike made for George Hincapie's record of 17 TDFs.  Hincapie is so bad-ass, he makes everything look so easy.  Yesterday in the tour, right before the base of the climb, when the peloton was doing like 40 mph, he just runs right up the left side dragging Cadel Evans up to the front like 5 mph faster than everyone.  It looked like Moses had laid down a little special path just for Hincapie.  Hincapie has been around so long that we just take it for granted that he's always gonna be there and before long he'll be leaving.  End of an era. You can't replace that dude.  I wish he could win a stage. 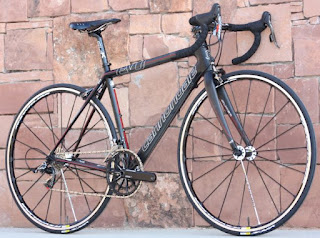 However this is my favorite new bike.  My buddy Yancey has one and let me ride it the other day.  Yes Virginia its fast.  It goes about as fast as a MEECH.  Crazy, sick lightweight flying machine.  They call it the "Best Bike in the World" and it probably is for what its built for.  I love it. 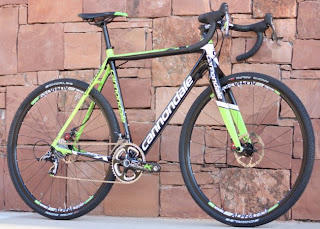 Oh my GAAAWWSH!
I never get tired of looking at this bike.  Kinda looks like a Kawasaki KX. 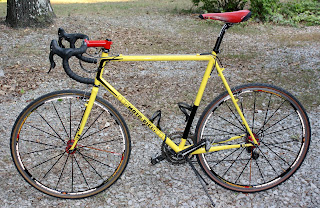 I've always been a Suzuki man myself.
Posted by MEECH at 6:01 AM