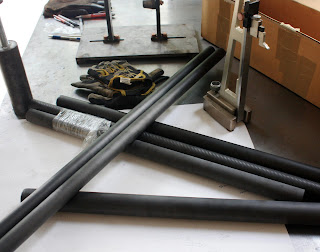 I am way behind on my first carbon frame project. If things had gone as planned I would've already ridden it and given you the lowdown, but I have been busy building frames for customers and various other projects that take precedence over my own personal desires. The riders/racers of MEECH Bicycles are my number 1 priority right after my family so I have to take care of you guys first,  but when I get up to par on those things then its time to play a little.  I'm not quite there but I'm getting closer.  I just received a batch of "carbonified tubes" from Enve Composites and hopefully a rideable bicycle frame will come out of this pile.  I'll post the progress as I make progress, if I make progress, or at the least I'll post the mess I make.  I'm gonna take my time because these things are just too nice to be wasting.  I've included a mug shot of Pinky the super-hound.  I talked Anne into giving him a mohawk the other day, now he looks like the butt-head that he can be.  When Anne and I first started dating I didn't care much for ol' Pink, and he tried to kill me on several occasions, but over the years we've become a solid team. Jeez, you can't believe how freakin' loud his voice is. The greatest thing about little dogs is that the messes they make are much smaller.  Ever clean up a pile of puke from a dog that weighs 100+ lbs.?  It takes almost a whole roll of paper towels, sometimes it takes 2 rolls if their vomit makes you vomit while you're cleaning it up.  I'm drifting now into gross territory.  Lets get back to the carbon.  There, much better. I was getting nauseous. 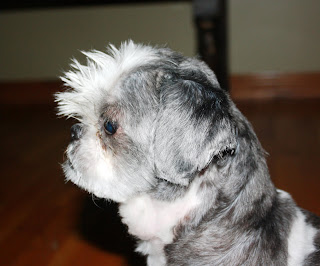