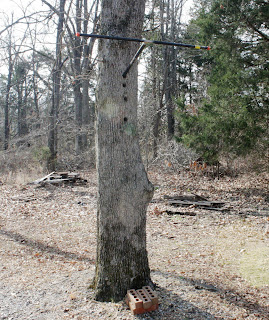 If you have yourself a nice steel fillet-brazed frameset thats a good start, but how many of you have a custom fillet-brazed pull-up bar?  I told yall a while back that I was training Rocky-style.  I have been wanting a pull-up bar for quite a while now.  Years ago when I actually went to a gym I would do lots of pull-ups and I thought by starting again might help my back a bit.  Well, turns out I've lost a little of that pull-up steam I had 12-14 yrs. ago.  I used to knock out 4-5 sets of 10-15, now its like 3 sets of almost 3 1/2.  Geez, I knew I wasn't in race shape but I had no idea it was this bad.  I'm not in as bad as shape as that tree though.  I missed the mark a couple of times trying to get the height of my bar right.  I don't like for my feet to touch the ground when I do pull-ups, and I hate those things you put over the door frame.  Anyway, now its almost too high, hence the bricks on the ground, but my feet don't touch.  This project should've taken roughly an hour or so at best but I think I spent the better part of a Sunday on it.  I forgot to mention the other tree I was butchering in front of this one.  Turns out it was over the property line.  Sorry neighbor, but that tree was dying already. He's lucky I don't send him a bill for building him a birdhouse.  Pardon me while I finish my workout.  Gotta go punch some chickens and chase some big slabs of meat around. 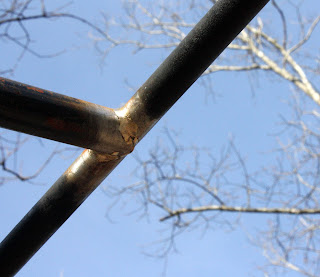