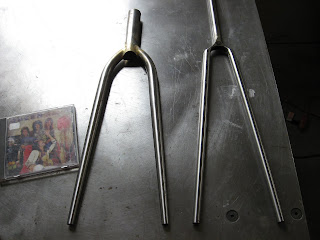 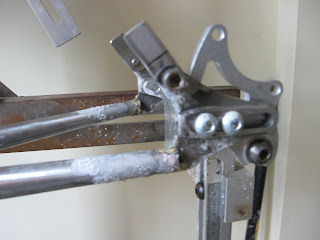 I had an extra set of these Paragon Sliding Dropouts laying around so i decided to put'em to good use. This is my setup to house the removable stays required for a belt-driven drivetrain. It worked well on the first one so I decided to stick with it. The left stay never needs to be removed but I give it the same treatment for symmetrical aesthetics, or you could just do it so they look the same on both sides. I threw in a photo of a couple of wishbones that I just finished up. I was gonna put the beefy one on the 650 but it was too beefy and you couldn't pull it out enough to get the belt in so I am gonna use some S-bend like on the previous frame. The little wishbone isn't for a bike at all, I use it to find water wells. Living around these lakes makes it way too shakey for a bicycle. The Queen CD is not for sell. With songs like "Bicycle" and "Fat Bottomed Girls" who would sell it?
Posted by MEECH at 9:40 AM