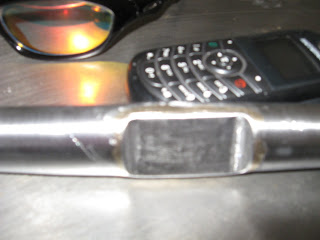 This was my resolve for cyclocross tire clearance issues. Indentations work fine but don't look near as good. Since this was the first time I had tried this I had to put it to the test so I took it over to a friend's house and we stuck it in the vice and each took a turn trying to break it, it never did. I did manage to collapse the other side of the stay eventually but we both decided it was plenty strong. This is warrantied just the same as my other stuff. Check out that high-tech gadgetry phone holding the stay in place, oh-yeah, $14 at Wal-Mart. The Blackberry cost too much so I opted for the Mulberry. I bought an expensive phone once and it fell out of my jersey pocket and before I knew it was gone it had been run over about 600 times. My friend Larry Yancey said, "Its still good", there was no screen left in it and it looked like someone had held it to a grinder. I have tried to lose the Mulberry but it keeps following me home. Sometimes when I go into the store I will just leave it on the hood of my car to see if someone will steal it, I still have it, in fact, one time I came out of the store and there was another one just like it sitting there next to mine. Go figure.
Posted by MEECH at 12:37 PM