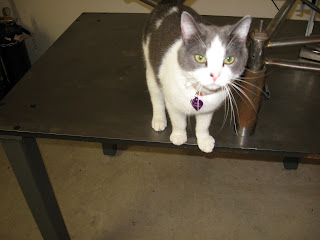 This is Louie the part-time frame building cat. He doesn't actually build the frames, I do, but he is in charge of straightening them. I may have to garnish his wages though because he spends half the time up in some tree and the other half he just kills spiders and brings lizards in and chews off the tail. He loves it the way the lizards' tail keeps moving after he has separated it from the body, its like two toys in one. He'll attack the lizard for a while and then attack the tail, poor lizards.

Not long after we moved to our new location Louie took a bullet in the shoulder. Yes, believe it or not someone shot Louie with a pellet gun. He took it like a man though. He pulled the pellet out with his teeth and spit it back at the guy that shot him, and said, "Nes time you pool dat piece on me, I take your piece away fro you and put it up your culo, and pool de treeger till it go click. Cuz nobody f#*k wit da Jesus!" You sayd it main. It might have been a lizard-man that shot him. Hey, if your gonna work with steel you have to be tough. Peace!