Finally Back in the Workshop 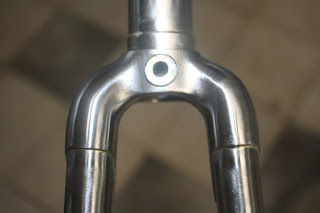 Finally got back into the workshop and did a little frame building, or fork building rather. I've spent the last few weeks fixing up an oldish 2006 RM 250. I didn't plan on spending as much time (or money) on this bike since I hardly ever ride any more these days but once I got into it I realized that it needed more work than what I had planned on doing. These days I can't do just a little something and let other stuff go, I have to go front to back and replace everything that I feel is necessary to make the project the best that it can be so I can feel like the job is done right. And so I ended up spending twice as much time and money as what I wanted  but I know everything is as it should be and that's worth everything spent.

Anyway, I had this Columbus Max fork kit laying around for some time now and planned on using it on the next build so i finally  opened the box and got to work. I enjoy building forks now for some reason. Used to be that I never looked forward to it. I would always build it after the frame was finished and I think I just felt like it had to be done in order to complete the frame set. Now, I build the fork first and view it as the start to a brand new frame set and feel as though the frame is being built around it, as in most cases it actually is. I can remember years ago, before frame building and even before knowing much about bikes at all, I purchased a Carrera Volans frame set, and then, like a moron, I purchased a super-lightweight Time carbon fork for it in order to get the weight down to what I perceived as an acceptable level. After riding it with the new fork and noticing that the bike just didn't feel right I called the owner of Red Rose Imports and started telling him about my problems. It was then that he informed me that the bike had been built around that fork and that I had totally ruined the bike's ride by taking the original fork off. I took his advice and switched back to the original steel fork and that was a very good lesson that still lives with me. To this day I feel like steel forks are untouchable. The weight is a slight disadvantage but the strength, handling, and tracking makes it worthwhile. Carbon forks have improved a lot since they were first introduced making them compliment the frames more and more and honestly I've never had a fork fail that I can remember be it carbon or steel, however, if I had to decide based on straight line tracking, comfort, and just overall confidence I would always put my money on steel.

It feels good to be back working on some bicycle stuff and so I'm leaving you with a handful of pictures and hopefully I will get back to posting some frame work as well. 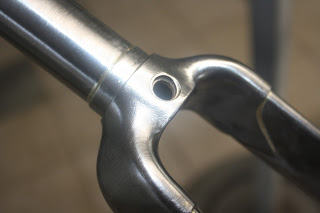 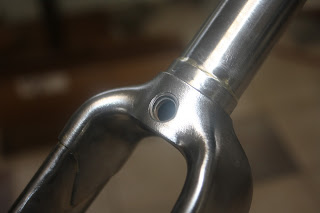 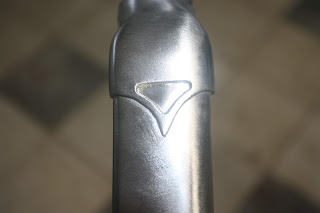 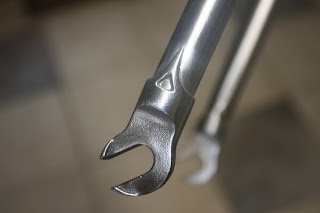 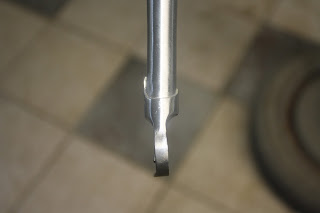 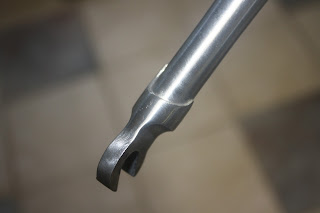 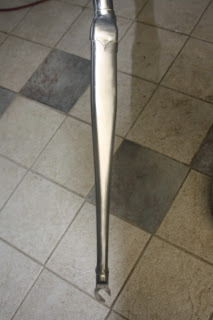 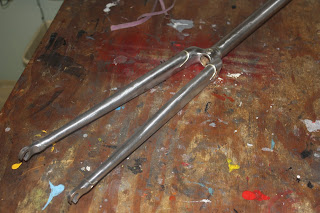 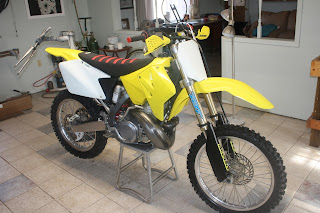 Pretty much everything is new here except for the motor. Motor seems to be pretty solid.  I tore it completely down and painted the frame, suspension front and rear completely gone through and revalved, new bearings and hardware in linkage and swingarm, the dents in the pipe were taken out and it was clear-coated, not to mention bars, cables, plastics, levers, silencer, brake pads, seat cover and so on. It's race ready for some lucky guy. Now I'm just waiting on some warmer weather to go see how it all feels. If it's too good it may become a keepsake as this was one of the best years ever for this particular model and it is probably one of the best 250 2-strokes ever made. 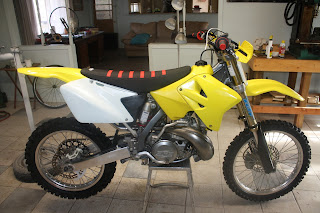 I'll forever be a Suzuki guy. 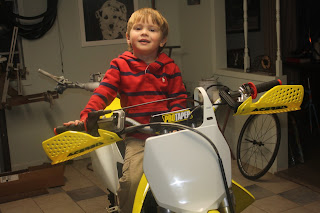 And Jack? Is there any doubt? This is my dilemma. Unfortunately he's just like his dad, one hand on the bars and as usual it was the throttle side. I feel like I've said that before. You're gonna tear a lotta rear fenders off riding like that son. Do as I say, not as i do.