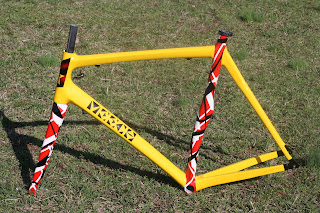 The last time I posted I believe I said something to the effect that the next time I post it would be with some color. Well, it took a while but here it is. After seeing a few Van Halen posts on Facebook I decided to incorporate a little EVH voodoo into one of my frames. It turned out to be a little harder than I anticipated. I think painting a bicycle might be a little harder than painting a guitar but I wouldn't tell Eddie that.  On second thought,
yes i would!

This was how it turned out after the first time I completed it and it just didn't seem to meld, however, as I'm looking at it here a couple days later it doesn't seem so bad. The head tube design, which I had no actual design at all wasn't even close to working. The paint job was good however it looked like it belonged on 3 different frames instead of one. After spending so much time trying to get this thing right and then to finish and realize it the paint scheme didn't really work like you thought it would was devastating at first, but what do you do? Shake it off and give it another dig. It took 4 tries to get the fork right, not to mention I got talked into some primer that didn't jibe with my painting products. That really messed things up from step one. I laid down the first color of base coat and it immediately started cracking and looking like a spider web. Took a long time to diagnose the problem but we finally figured it out and fortunately it was nothing that I was doing. That's always great to hear after you've beat yourself up for a week. The primer incident was a lot of the reason it took so long. Anyway, all water under the bridge. 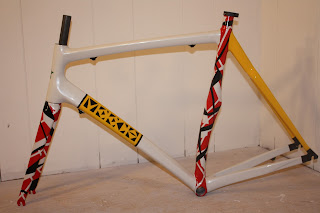 Here's the "do-over" as we used to call it when we played football on the playground. I feel much better about it now. A buddy of mine even said that it looks just like me. Was that a compliment? Not sure. Anyway, I'm still not sure it's done. I think it needs some black where the top tube and down tube meet the seat tube and then also on the other side where the stays connect. Geez! When will I be able to move on?