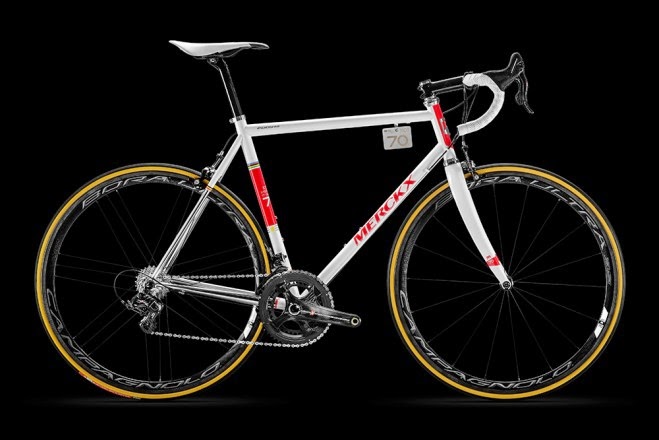 A new limited edition Eddy Merckx is being offered for Eddy's 70th birthday.  Its a beautiful bike draped with full custom Campagnolo. The bicycle is apparently handmade, which is a nice touch, but with a price tag of $17,500 I won't be getting one.  Its ashame because I like it alot and was gonna put some 32c Continental 4-Season tires on it and hit the gravel circuit.  The only limited edition bike I ever owned was the pink LOOK KG171 that Team ONCE used in the Tour.  They made like 225 of them or something like that.  If I remember correctly I had No. 188.  LOOK used to be my brand of choice as it was an extremely comfortable bike.  I rode that bike 13 hours in my first three rides, 6 hours on the third day, and couldn't wait to get back on it the next day.  In the end, I got tired of the Pepto Bismol pink and being called a faggot at the stoplights.  "Stop calling me a faggot you fuckhead!" In the end I had it repainted in a way that I thought would still do it justice.  Basically ruined it and sold it for a couple hundred bucks.  I'd probably do the same thing with this Eddy Merckx if I could afford to. I bought a Merckx Leader right before I purchased the LOOK.  I believe it was the 1997 Team Telekom edition.  Beautiful paint job but the frame and fork weighed over 6.25 lbs.  Can you imagine?  I spent a year in the Cat 3 class racing a 21+ pound road bike.  Ahh, its so much fun looking back on my earlier days of stupidity, as opposed to my most recent stupidity. Sometimes I look back and think I was happier back then, but then I think, "No, you were just stupid and thought you were happy." 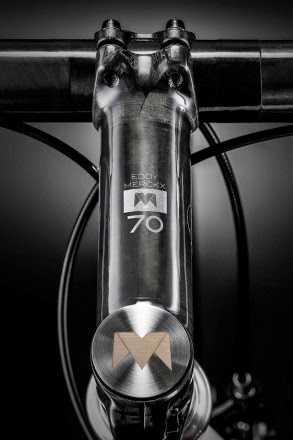 Yes, I do believe this is beautiful. The components are specifically made for this bicycle's production, or so I would imagine.  It would suck to be flipping through the Performance Closeout pages at the end of the season and see this stem on sale. How do you tighten that steerer cap down?  After purchasing a $17,500 bike the first thing I'm gonna do is take it all apart and get it set up to race, maybe put some SRAM Red on it. Can you imagine paying that much for a bike and being uncomfortable on it?  Uh, naturally.  I want to see the video where the guy who buys one of these forgets that its on top of his car and then drives into his garage.  "Hello Eddy?  Do you do frame repair? While you're at it, do you think you could paint my Whiskey carbon fork to match it? This is a race bike you know." 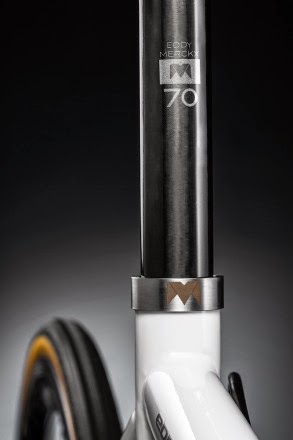 This is very nice.  The first thing I noticed after the custom seat cap and post was that its tig-welded.  "Strike One!"  Sorry.  It's a personal thing. Once again, this seat cap is beautiful. 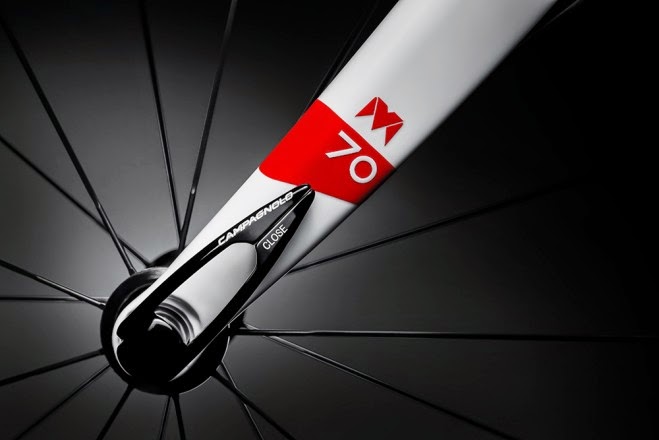 "Hello, Mr. Campy? I would like to purchase some skewers. And don't worry, I promise that when I do the Tuesday night crit races I'll use my SRAM skewers so I don't scratch these." 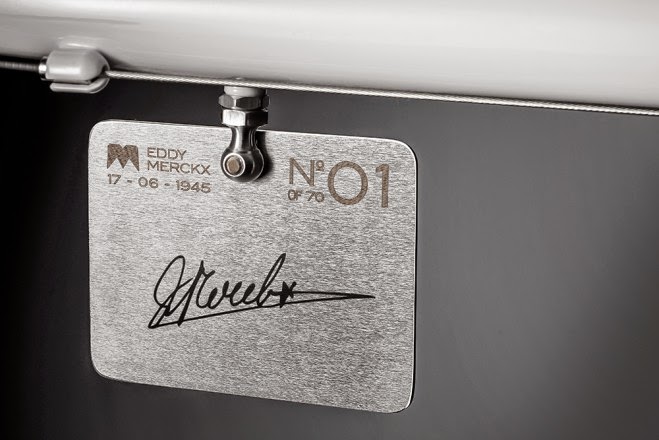 This is brilliant here.  You'll have a lifetime racing number already on your bike and you'll never have to pin another number on your jersey again.  That alone is worth $17,500.

"I'll take Numbers 1 and 71. Do you accept Paypal? What?  You're only gonna make 70 of these?  Mr. Merckx, with all do respect, if you can get over $17,000 for a bicycle, I would make as many as I possibly could.  Have you contacted China to see if they can help you out with production?" 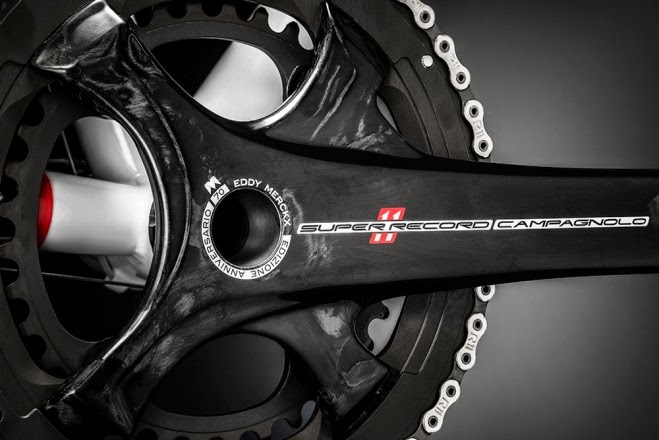 Everyone knows I'm a Campy man.  Uh oh, what's that?  Is that a blemish on the tig-weld at the bottom of the right chain stay? That tig-welder must've been hungover from Sunday's cross race, either that or Eddy himself welded it. I guess we're all human. "If you don't mind, leave that off of mine Ed."  Where's the carbon fiber chain stay protector? 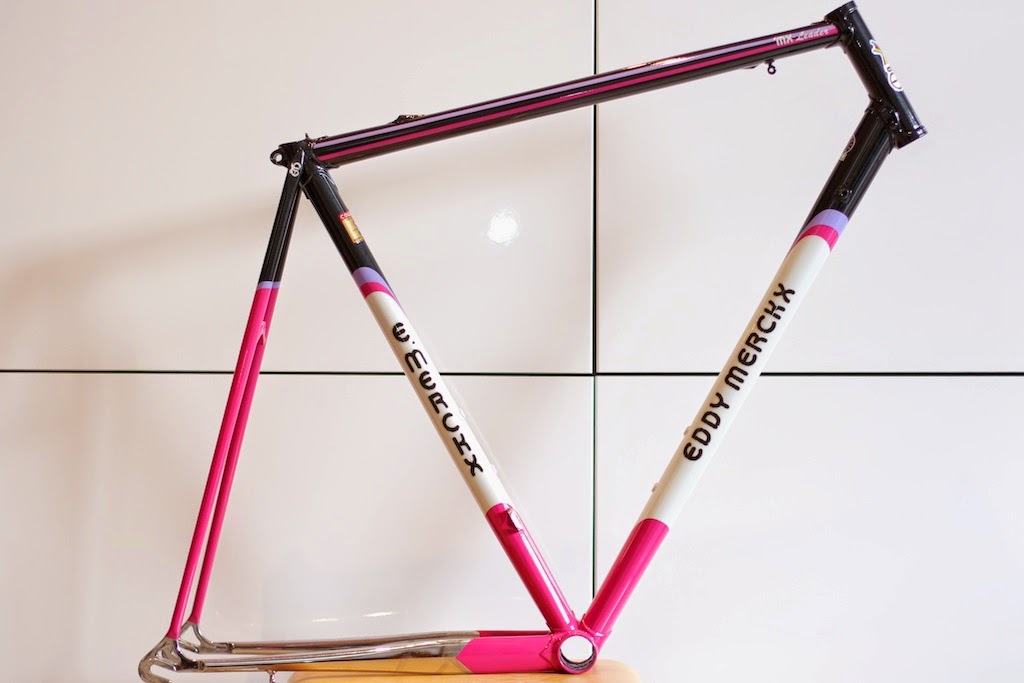 This is like the Merckx Leader frame that I used to drag up the hills in the Cat. 3 races.  Mine had a big dent in the top tube from a crit crash. Chrome plated horizontal dropouts are a miserable experience.  Every time I stood up on a hill I would pull the wheel to the left. I used to have some power, and I didn't need a meter to tell me how much either. I've never purchased a frame with horizontal dropouts since, nor have I ever, and will never, use any on my frames.  Hate them with a passion. On a positive note, you may not be able to see it in this picture, but there is a super-thin, gold highlight around the edge of the letters.  You could barely see it even when you were looking directly at it, but when the sunlight hit it, it was such an elegant touch that I never forgot it.  I've asked around some paint shops about how to do it but they all tell me that it had to be a decal.  I've considered calling Eddy myself and trying to find out.
"Hello Operator?"
https://www.youtube.com/watch?v=Pwg5mY-nwJA 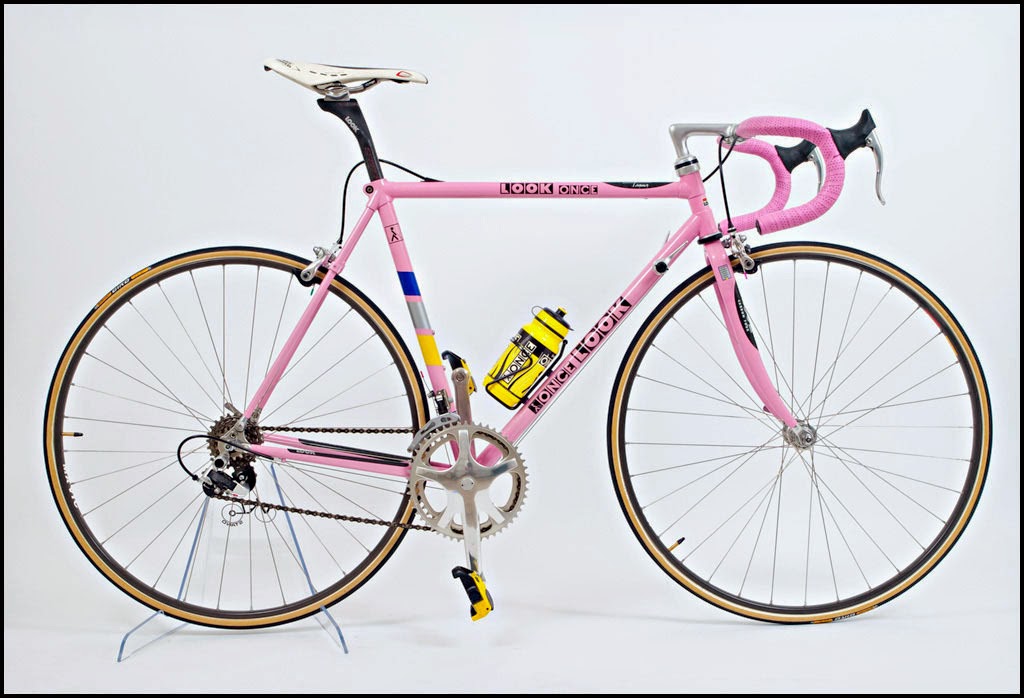 Here is the old LOOK KG171 that I was speaking of. Mine didn't have pink bar tape though.  This guy must've been a total fag (means cigarette butt you know). I hate to say it but this bike rode 10 times better than the Merckx.  Sorry Eddy.  The truth hurts sometimes. I think I had something like $2500 in that bike. And that was high-end back then. I think if I pay $17,500 for a handmade bicycle, I would at least like to have the files that they used to make it with Eddy's signature on them.  Oh yeah, and get me a cappuccino and a box of Little Debbie Swiss Cake Rolls while you're at it. 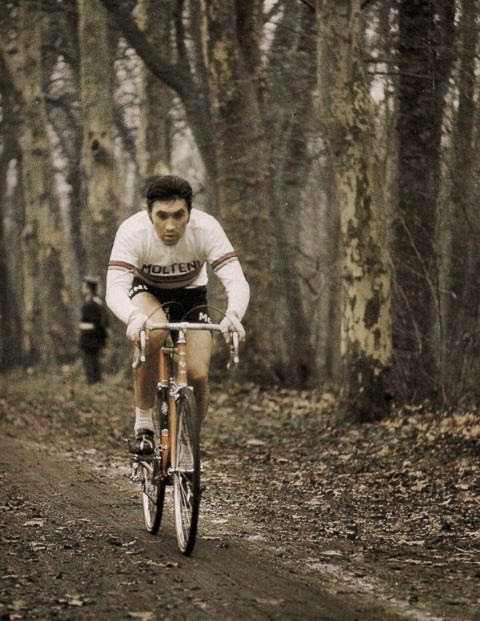 This is my all-time favorite picture of Eddy Merckx.  He is the GOAT when it comes to bicycle road racing. Ride on Eddy!