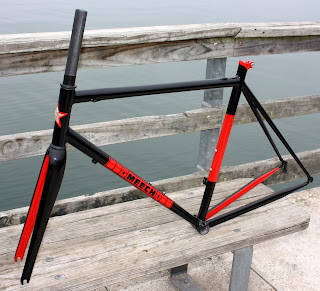 Alright, I finally got Steve's road frame all finished.  It turned out beautiful in the end but I was having some serious painting issues in the beginning and I was beginning to wonder if I was gonna be able to pull this paint job off.  I'm still not exactly sure what was going on but I think it had something to do with the primer.  The first time I tried to paint this thing I was buying a little booth time from a guy who has a auto/hotrod restorage facility.  Everything from milling machines, tube benders, welders, and a full blown paint booth.  he's let me use it a couple of times and its an excellent setup except i never know how long I have to work.  Anyway, i shot the red and started taping it off to shoot the black and red paint started coming off with the tape.  Not good!  So we checked the temperature of his booth and it was a little chilly in there so I wrote that off as the culprit.  I never even noticed it was chilly in there as I was working.  So I bring everything home and sand it down and shot some more red on the fork the following day, which was much warmer by the way, and the same scenario, paint is coming up with the tape.  How many times did I do this you might ask?  Don't ask.  I eventually took it to the paint store and talked with all the local experts and i began to get a little worried when they told me they didn't know what it was.  However after a little closer inspection they noticed that not only paint was coming up on the tape but also a little primer as well.  I have been using the same primer from the very beginning.  Its SprayMax epoxy primer in an aerosol can but its a two-part aerosol as you have to break the catalyst inside and the two parts mix together when you shake it up.  I had never had a problem before but after about 4 attempts at painting the fork you have to try something different.  So I bought some new epxoy primer for a spray gun and stopped by Lowe's and picked up a decent sized compressor, which I've been needing for a long time, and just went to work.  At this point I was a little gun shy.  Paint had been peeling off in every imaginable way and I was trying every type of tape there was.  Finally, luck at last.  With the new primer on the frame cured and sanded I shot the red and about cried when no paint came off.  When you take a close look at this frame you can see all that was taped off, not to mention a MEECH stencil that has about 100 parts to it, and I was sweating bullets every time I started to peel a new piece of tape or stencil off.  Big sigh of relief when I pulled the final stencil off, and then I did start crying.  Just kidding.  Anyway, I'm very pleased with how it finally turned out.  All that hard work was worth it and I'm constantly reminded that nothing good comes easy.  The amount of painting experience I got with this one frame is unimaginable and now I'm gonna start using it on about 5 more frames that are waiting on paint.  Any framebuilders out there that have a good painter you better give him a big hug and a kiss because you have no idea how much he's worth to you.  Painting is a tough bit but i truly enjoy it and want to get better at it.  Paul was on standby just in case I needed bailing out but i really wanted to solve this myself.  Mission accomplished.  I'm running a bit late for work so I'm gonna bail on this post for now and do a little finish work on it later.  I have to go to my hometown of Jonesboro for a couple of days to get some work done there and then I'll be back.  Thanks for all the patience as I know I haven't been here but finishing this frame took precedence over talking about it.  I wanted to post pictures of all the problems I was having but didn't feel like taking the time because I was so eager to solve the problem.  Anyway, all is well that ends well.  I'll see you guys in a couple of days.  They say a picture is worth a thousand words so I'm gonna shut up now and let the pictures do the talking.

Oh yeah, love the color choices by Steve.  Black and red seems so simple and I've often wondered about what it would look like but the way it looks live is better than I imagined.  The red is Torch Red and i love it. This paint job has me reassured about another similar paint scheme that I've been wanting to try.  There are just so many possibilities with paint, its endless.  I'll do as many as I can.  How bout those lake shots?  Caught you off guard with that didn't I?  Don't worry, I threw in a couple of backyard photos for those hardcore MEECH followers. Hasta luego. 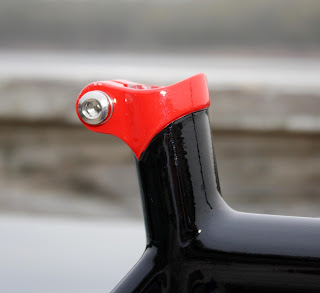 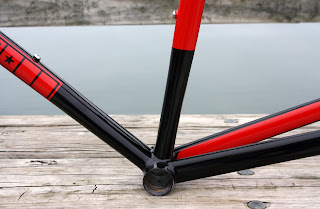 Love the shape of these tubes. 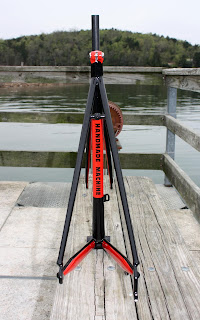 I tried every possible angle to get that shadow off the seat tube but had no luck.  There didn't seem to be any sun at all but I guess there was just enough to make the seat stay cast a shadow. 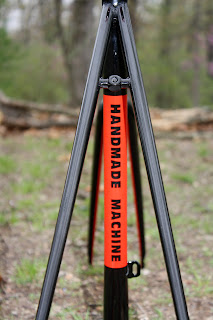 "Did you try the backyard?" 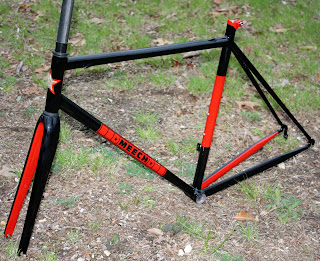 In the end it all turned out nice and I was very pleased with it. 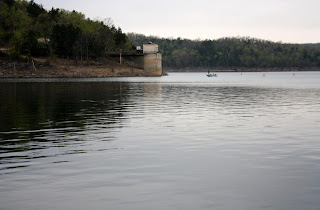 Here is a pic of a lone fisherman out on the lake.  As I was shooting the photos there was fish about 40 ft. away that kept swirling on the topwater.  He's lucky I didn't have my custom fly-rod and a MEECH Custom topwater popper or he would've been sleeping long-side down in the skillet.  I seldom go fishing and seldom keep 'em when I catch 'em but its hard to beat fresh fish out of these lakes here.  They're crystal clear. 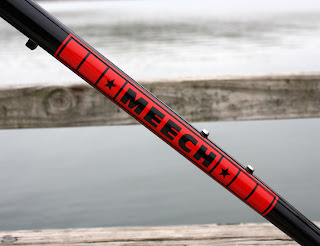 Thanks for checking things out and thanks Steve for the opportunity.  Build it up and send us some photos.  Enjoy the ride!