Here are a couple of pics of Noah's buildup.  This was a frame that I took to a show in Austin a while back and I put a one-off fork on it that mimicked a fork that I saw on a friend's old Raleigh.  I had no idea how it would feel but Noah said, "Solid and stable.", so thats what i like to hear.  This frame is unique because it was built similar to a Long Haul Trucker by Surly, which seems to be a very popular bike, however I used True Temper OX Platinum tubing to lighten the frame up.  I know absolutely nothing about touring and this was my first attempt at building a touring frame and according to what Noah told me it does exactly what I had hoped, solid enough for the long treks and light enough for a quick spin in the group ride or local cross race.  I love the look of the custom fork and the fat tires.  Roll on Noah. 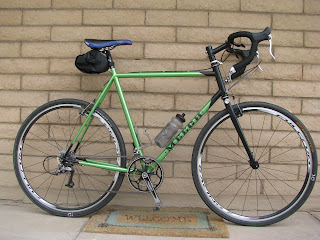 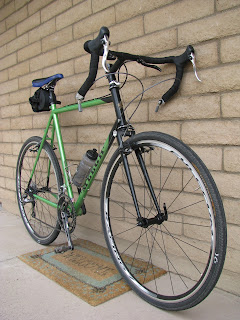